Hello! I'm Jake, referred to as such by my online friends for my exclusive love of the solitary survivor. I am a studying game designer and have come across quite a few fun concepts for killers & survivors alike! Naturally, I wanted to try my hand at creating a concept and have developed two concepts of my own. The first one, Killer Jake, is completely finished and has been placed below! I took a lot of time and effort designing this killer to be a truly viable concept. I even crunched some numbers to have potential modifications to nerf/buff should certain aspects be tuned incorrectly. But only a playtest would iron out the details. This little project was fun and, if time permits, I will post my secondary killer concept in the future!

I hope you all enjoy my survivor-turned killer concept!

The icons were all made by me using default Dead by Daylight assets from other perks or from scratch with what I could put together.

The long eternity of being within the Fog is taxing. Even the veterans of the Entity's realm have succumbed to the corruption that permeates their tormented existence. Over time, Jake's solitary escapades became more and more frequent. Distancing himself from the other survivors, only encountering them when he'd wake up at the campfire after a trial. His relations with them degraded as did his desire to seek escape. The solitude of the wilderness was still out there for him to seek solace in, even amongst the terrors of the fog. All he had to do was master this new, foreign territory. Using his survival skills and what he has learned through his anguish in the fog, he steadily pulled away from being prey and has now become... 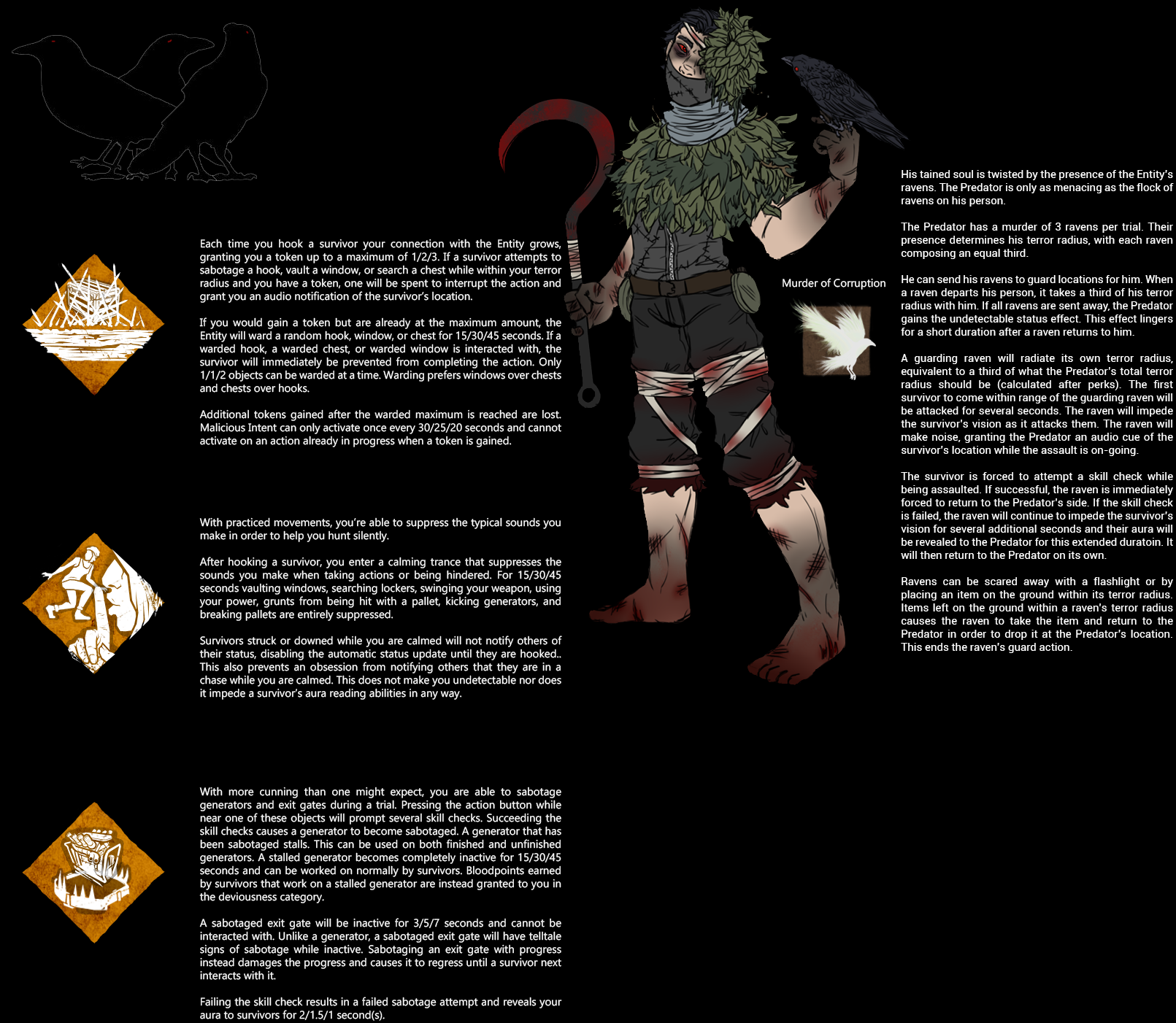 Hook Design: Simple, sleek steel. The hooks look loose on their stands, ready to fall as if just put back together.

Memento Mori: Jake skewers the survivor on his hook and as he traps them in place, ravens begin swarming the survivor to eat them alive.

His tainted soul is twisted by the presence of the Entity’s ravens. The Predator is only as menacing as the flock of ravens on his person. The Predator has a murder of 3 ravens per trial. Their presence determines his terror radius, with each raven composing an equal third.

He can send his ravens to guard locations for him. When a raven departs his person, it takes a third of his terror radius with him. If all ravens are sent away, the Predator gains the undetectable status effect. This effect lingers for a short duration after a raven returns to him.

Each time you hook a survivor your connection with the Entity grows, granting you a token up to a maximum of 1/2/3. If a survivor attempts to sabotage a hook, vault a window, or search a chest while within your terror radius and you have a token, one will be spent to interrupt the action and grant you an audio notification of the survivor’s location.

If you would gain a token but are already at the maximum amount, the Entity will ward a random hook, window, or chest for 15/30/45 seconds. If a warded hook, a warded chest, or warded window is interacted with, the survivor will immediately be prevented from completing the action and the ward is expended. Only 1/1/2 objects can be warded at a time. Warding prefers windows over chests and chests over hooks.

Additional tokens gained after the warded maximum is reached are lost. Malicious Intent can only activate once every 30/25/20 seconds and cannot activate on an action already in progress when a token is gained.

With practiced movements, you’re able to suppress the typical sounds you make in order to help you hunt silently.

After hooking a survivor, you enter a calming trance that suppresses the sounds you make when taking actions or being hindered. For 15/30/45 seconds vaulting windows, searching lockers, swinging your weapon, using your power, grunts from being hit with a pallet, kicking generators, and breaking pallets are entirely suppressed.

Survivors struck or downed while you are calmed will not notify others of their status, disabling the automatic status update until they are hooked. This also prevents an obsession from notifying others that they are in a chase while you are calmed. This does not make you undetectable nor does it impede a survivor’s aura reading abilities in any way.

With more cunning than one might expect, you are able to sabotage generators and exit gates during a trial. Pressing the action button while near one of these objects will prompt several skill checks. Succeeding the skill checks causes a generator to become sabotaged. A generator that has been sabotaged stalls. This can be used on both finished and unfinished generators. A stalled generator becomes completely inactive for 15/30/45 seconds and can be worked on normally by survivors. Bloodpoints earned by survivors that work on a stalled generator are instead granted to you in the deviousness category.

Failing the skill check results in a failed sabotage attempt and reveals your aura to survivors for 2/1.5/1 second(s). Only one generator and one exit gate can be sabotaged at a time.

Iridescent Wrench: (Ultra-rare) A wrench made of a glass-like material. It is warm to the touch and filled with twisted memories. It radiates the Entity's power. The Predator's ravens will knock items from the hands of survivors that fail the skill check to shake them off. The aura of the survivor is revealed to the Predator for a short duration when this occurs.

Memento Vitae: (Ultra-rare) A token that holds faint memories of a time before. Faded and worn, it doesn't have much use now. The Predator's ravens will guard for their full duration even after being triggered by a survivor. A guarding raven will now split into its own flock in order to assault every survivor that enters its terror radius for its duration. Considerably reduces the duration of the Predator's undetectable status when a raven returns to him.

Broken Glasses: (Very Rare) A pair of glasses from a forgotten time. The lenses are broken and the tape holding both sides together has lost its stickiness. The Predator's murder of ravens is reduced by 2 for the next trial. Activating the action button reduces the Predator's terror radius to zero, immediately granting him the undetectable status, and transfers his terror radius to all ambient ravens present within a trial for a moderate duration. This effect breaks if the Predator strikes a survivor.

Sports Cap: (Very Rare) An old sports hat, likely used to keep the sun from a person's eyes. It's tarnished and beaten now. The Predator's murder of ravens is increased by 1 for the next trial. Considerably increases the duration of the Predator's undetectable status when a raven returns to him.

Flower Clip: (Very Rare) A broken hair clip with a flower attached. The colors are faded and muddied now. Considerably increases the time the Predator's ravens will stay on a survivor and causes them to trigger a second skill check.

Oversized Beanie: (Very Rare) A tattered beanie used to keep oneself hidden. It's now full of holes and starting to unravel. Moderately increases the time a raven will guard a location. The Predator's ravens no longer have their own terror radius.

Shattered Sunglasses: (Rare) Remnants from a forgotten time. They're broken and unable to help one keep a poker face any longer. Moderately decreases the travel time of the Predator's ravens to and from the Predator. Slightly increases the time they will guard a location.

Broken Watch: (Rare) A wristwatch with its face shattered. Time has no meaning in the fog. Considerably increases the time the Predator's ravens will guard a location. Moderately decreases the travel time to return to the Predator.

Abandoned Medkit: (Uncommon) Tools intended for healing left in a hurry. The Predator's ravens now cause the exhausted status effect on a failed skill check.

Discarded Toolbox: (Uncommon) Its contents taken, the box is worthless. The Predator's ravens now cause the mangled status effect on a failed skill check.

Discarded Totem: (Common) A fragment, a reminder of where it all began. Slightly increases the time the Predator's ravens will guard a location.

Discarded Hook: (Common) A memory from when intentions were different. Slightly increases the duration of the Predator's undetectable status after a raven returns to him.

Torn Shroud of Unity: (Common) Abandoned. Unused. Slightly increases the time the Predator's ravens will follow a survivor once triggered.