the moment I first saw Yui Kimura in PTB I started to wonder what does the writing on her clothes mean. So I decided to write a guide for it now (I forgot to make any screenshots during PTB and had to wait till she's released live).

First, the biggest piece of writing on her back and front: 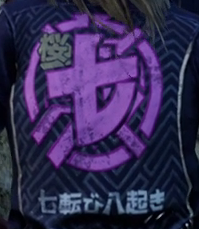 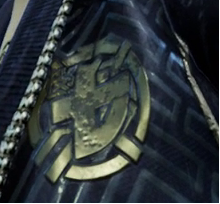 This one's 桜七 - Sakura Seven. It's the name of Yui's gang and was quite easy to figure out.

The white piece of writing below was trickier. It is 七転び八起き, which can be read as shichiten hakki or nanakorobi yaoki. It is apparently a Japanese idiom, meaning:

Most notable is the last meaning: falling seven times, getting up eight times. It is the most literal translation of the idiom, since 七 - seven, 転び - fall, 八 - eight, 起き- get up.

As a bonus, Yui's lore constantly mentions hachimaki. Citing from Wikipedia: "A hachimaki (鉢巻, "helmet-scarf") is a stylized headband in Japanese culture, usually made of red or white cloth". In lore DBD devs refer to it as handkerchief too. It's the pink cloth on Yui's right arm:

Golden patterns on Yui's sleeves and pants don't mean anything as far as I can see.