Home› Guides
About the issue where your game is showing as having deleted DLC's or lost game totally. Go to your Steam app. Go to Steam < Settings < Downloads < Clear Download Cache. This should restart Steam and you should have access to your game & DLCs.

How to "Git Gud" a WIP survivor guide

Greetings everyone, my name is @Peasant and I will be your guide into the nuances of Survivor gameplay and game sense. The goal of this guide will be to increase the competency of your average survivor so that folks can win more games. With that out of the way, let's start with the primary concern for new players and somewhat experienced players.

If you have played Dead by Daylight for more than a few minutes as survivor you've likely seen this wondering pop-up:

This icon is called a Skillcheck. They can randomly pop up during Repair, Healing, and Sabotage Actions. You will usually get a notification one will appear with a chime. The exception to this rule is when the Killer is running a perk called "Huntress's Lullaby" (https://deadbydaylight.gamepedia.com/Hex:_Huntress_Lullaby). Though this perk is at the time of this guide somewhat rare to see. So the skillcheck as seen above can have 3 outcomes. You can get a good outcome, a great outcome, or a failed outcome. What we want to focus on is the great outcome. If you are able to hit the displayed key while the red marker is within the solid white zone you normally get a progression bonus on your current action along with more bloodpoints than a good outcome. However, that's a small window of time to hit the button in, so how can you increase your odds? Well for the PC players I happen to know a website (http://mistersyms.com/tools/gitgud/index) that let's you practice skillchecks to your heart's content in safety from the threat of a killer. However there is a more important note to make when observing skillchecks. Skillchecks, are like the game pictured below: 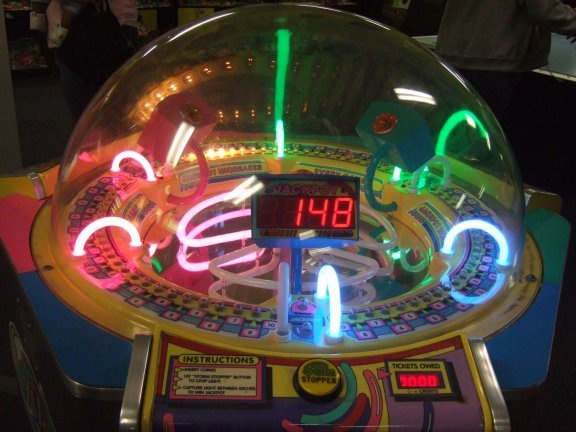 You may ask what the significance of this comparison is so allow me to explain. In the pictured game you're trying to push a button to get a spinning light to stop in a zone for tickets. The best ticket earning zone is rather small though. So how can you succeed? Press the button a second early from the desired area, for us it's the great skillcheck zone. The reason why you need to press the button a little early is because there is a brief delay between the time you see the red marker in the white zone and when you push the button. So by pushing the button a little early while you're pushing down the red marker will move into the great skillcheck zone.

Now that you know a strategy for hitting great skillchecks you can go ahead and practice! In the meantime, I'll work on making some map diagrams for part 2 of this guide: Game Sense.

After Gamesense I'll likely link up some videos on how to loop tiles and then finally go on a crazed hunt for all of the possible totem spawns.