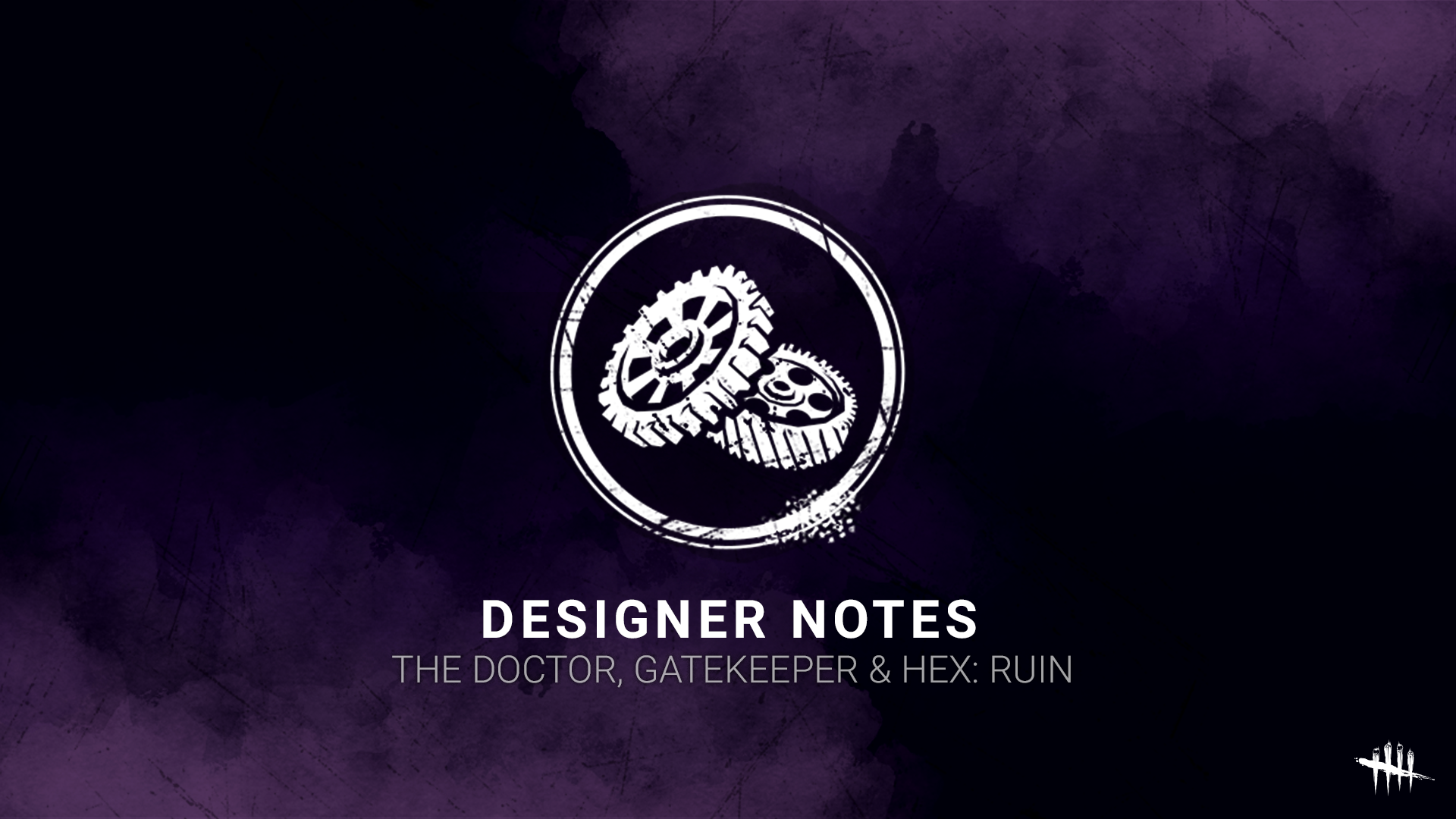 Welcome to our Designer Notes, a series of blogposts presenting the fine details of upcoming design changes. Today, we’ll be going over the first update of 2020, which includes changes to The Doctor, the Gatekeeper Emblem, and Hex: Ruin.

In the next mid-chapter update, we will be changing core elements of The Doctor's gameplay. He's been a polarizing figure since his release, and we felt it was time to revisit his kit with an eye to making it less frustrating to play against him. We will keep his core identity as a Killer who shocks people with electricity and causes them to go insane, suffering several different kinds of afflictions and hallucinations. Some of his abilities and most of his add-ons will get an update pass.

We identified a major source of irritation to be his Static Field. The problem is that The Doctor gets periodic notifications of Survivors' locations in his Terror Radius due to their Madness levels increasing passively. It's the lack of action needed on the part of The Doctor to find nearby Survivors that makes it feel annoying to play against. With that in mind, the update centers around removing Static Field and replacing it with another ability.

The new ability replacing Static Field is called "Static Blast"; this is mapped to the Active Ability button. After charging the ability for a short duration, it releases a blast of static electricity throughout The Doctor’s entire Terror Radius. Any Survivors caught in the area of effect are shocked causing them to scream and acquire an amount of Madness. If their Madness level increases, they also reveal their location to The Doctor as usual.

While charging Static Blast, The Doctor's movement is significantly reduced, and the ability has a long cooldown. The idea behind the design of Static Blast is to make it powerful as a location tool, but very difficult to use while in a chase, hence the limitations on its use.

As Shock Therapy and Static Blast are now linked to separate inputs, we've removed the different Treatment and Punishment stances to improve the gameplay flow. The Doctor's base movement speed is still 4.6 m/s (the "regular" movement speed for most Killers), but he can now use Shock Therapy more easily as he doesn't have to switch stances to gain access to it. So we've added a brief pause after using Shock Therapy before he can attack or use another ability.

One last thing we've addressed is the frustration of using Snap Out Of It to drop from Madness level III to Madness level II. After the update, missing a skill check during Snap Out Of It will cost the player 25% of their progress instead of resetting it entirely. Also, if they stop the interaction before it's complete, they will not lose their progress and will continue from where they left off on the next attempt.

The upcoming mid-chapter update will also include a major overhaul to Hex: Ruin, and an associated update to the Gatekeeper Emblem. Recent data show that Hex: Ruin is used in over 80% of all games in the red ranks, and across the entire userbase it appears in about 45% of all games.

We took a close look at the perk to identify what makes it so frustrating to play against. Three key issues were identified:

We also looked carefully to see how it functions as part of a Killer's loadout. Beyond the obvious desire to slow down generator repair, Hex: Ruin functions as one of the very few perks effective as slowing generator repair in the first couple of minutes of the Trial. This is important to Killers' rankings because the Gatekeeper Emblem highly rewards keeping as many of the 7 generators incomplete as they can for as long as possible.

Because Hex: Ruin is one of the few tools a Killer has for getting an Iridescent Gatekeeper Emblem, the update needed to respect that. Just a straight-up nerf without considering the consequences for that Emblem wouldn't be a good plan. So before getting into the Hex: Ruin change, let's go over the Gatekeeper Emblem.

Currently, Gatekeeper's underlying points are scored as a number of points per generator remaining to be repaired multiplied by which minute the match is in. Additional points are scored for any remaining generators at the end of the Trial. This provides much less of a reward to a Killer who loses three gens quickly, but then doggedly keeps the last few until the end of the match.

The new version of Gatekeeper is simpler: one point is scored per generator remaining to be repaired per minute for the first nine minutes. At the end of the Trial, if both Exit Gates remain closed, additional points are scored. With less focus on keeping seven generators up, we can move on and change Hex: Ruin without making it significantly harder for Killers to do well in Gatekeeper.

The new Hex: Ruin is simple:

All Generators are affected by Ruin; if a Generator is not being worked on, it regresses at [1/1.5/2] times the normal regression rate.

The Hex effect persists as long as the related Hex Totem is standing.

This version of the perk has many benefits:

The changes outlined above, along with the Lery’s Memorial Institute rework, are slated for the mid-chapter update and will be available to test on the Player Test Build (PTB) starting tomorrow. Please be sure to let us know what you think once you’ve had a chance to try them out!