This post is not to be taken seriously. My friends and I found this funny picture of three cats having a satanic seance with loops. 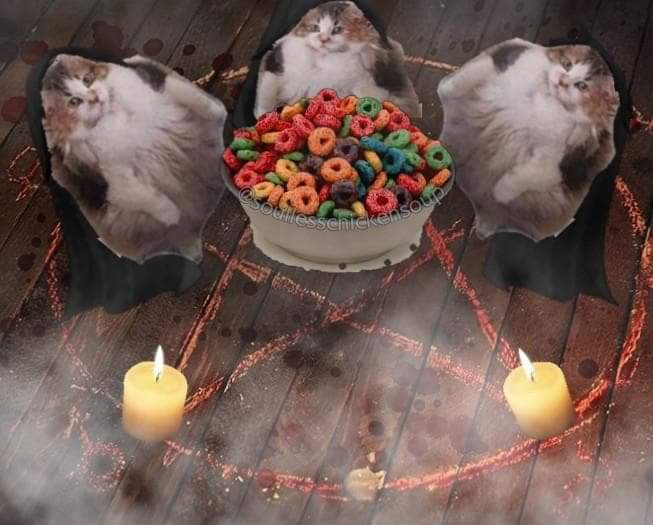 So I had the idea to actually make it a Killer Concept! This is Loops, The Killer Cat. He's 8ft tall and will kill you with his murder spoon!

With his attacking animation he hits you hard with the round end of the spoon and licks your delicious blood, finishing with a delightful, chubby meow.

He makes big thumping steps and if you're close enough to him, the ground will shake. His 52 meter terror radius is a constant loop of crunching and gets louder when you are near him. His chase music is a tuba that blows the fastest chunky note it can hit added with fast crunching sounds!

Power: Loops has a special power where if you are eating cereal on the map. It will show your Aura and give off sound notifications. If you happen to eat fruity loops! Loops satanic belly will glow a bright red and fly him over the map to your location!

Perk 1 (Chunky Chunky): When seeing the survivor above you or on a secondary story, this perk will light up and give the killer the ability to jump to that survivor. Cool down is every hour.

Perk 3:(Brother I Crave The Loops): All survivors crave Loops and will constantly meow until they eat some. survivor's meows can be heard all over the map and will be at max volume. A way for survivors to break out of this state is if the player goes on Twitter and tag MCote_BHVR picture of themselves eating a Bowl of cereal with the caption of "The Entity Craves The Loops Brother!"