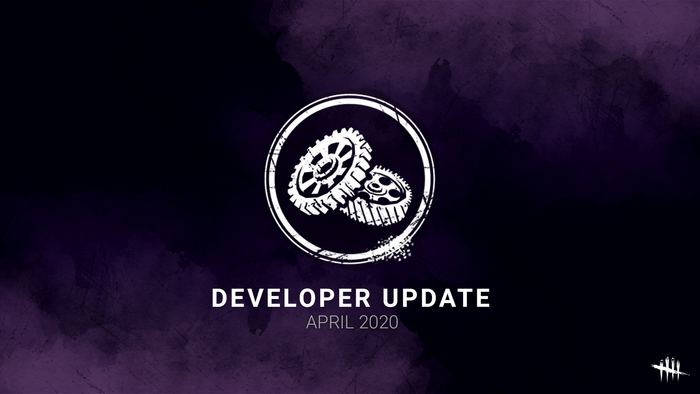 We’re back with another Developer Update, a series of blogposts detailing various changes coming to Dead by Daylight in the near future. In this entry, we’ll be going over some of the most notable changes from the upcoming mid-chapter update.

We’ve been keeping a close eye on repair speed in recent months and have prepared some changes to repairing. This comes in the form of two changes:

Reduced efficiency when repairing with other Survivors

As you may have noticed, whenever another Survivor comes along and starts repairing a generator with you, your repair meter turns red to indicate that you are repairing slower. This is because for each Survivor working on the same generator, your personal repair speed decreases by 10%.

Going forward, the speed reduction for each additional Survivor is being raised to 15%. While this may sound like a small change, it is the difference between four Survivors finishing a generator in about 36 seconds compared to the current 28 seconds.

This change – in conjunction with other changes discussed below – aims to eliminate instances where it feels as though you could not have possibly gotten to the generator fast enough to stop it from being powered, particularly at the start of a match.

A successful great repair skill check would add an additional 2% progress to the generator – about 1.6 seconds worth of time saved for each great skill check. Experienced Survivors are often able to consistently hit great skill checks and shave a significant amount of time off a generator. To better control the repair times of generators, this bonus has been halved to 1% (0.8 seconds).

With the above changes in mind, we have made changes to two Survivor perks.

Prove Thyself: Increased the repair speed bonus from 10% to 15%.

Stake Out: Now increases the great skill check success bonus from 1% to 2%.

For the 3.7.0 update, we have taken some time to revisit some existing maps and update them using the new tools we have at our disposal and everything we’ve learned since the game first launched. We reviewed as many maps as we could in this update, but if you don’t see a particular map below, it’s always possible that we’ll revisit it in the future. These changes come in a few different forms:

Each map has a unique size and layout, with some larger than others taking a long time to cross. Some of these maps are being reduced in size, while others are having their layout adjusted.

Some maps allowed “maze tiles” (tiles like jungle gyms and LT walls) to spawn too close to each other, allowing an experienced player to link them together, making it incredibly hard to capitalize on a Survivor’s mistake. These tiles are being spaced further apart to better control the safety in some of these maps.

Certain windows on some maps were too safe, leaving no room for mindgames and forcing the Killer to chase the Survivor through the window three times in order to block it. We have done a pass on most of these windows and altered the loop or replaced them.

Some tiles have been changed for a variety of reasons, such as adjusting loop lengths or fixing abusable spots.

Some buildings feature window variations, where a different set of windows could be available from one match to the next. Depending on which windows were open, a building could be either incredibly safe or unsafe. The random element to these windows is being disabled on some maps to control the loop safety and give the buildings a consistent safety rating.

There’re far too many changes to go into details for each map in one post, so please refer to the chart below for more info. Please keep in mind that some changes may be larger than others, and a small update to a map now does not rule out the possibility of more changes down the line. Likewise, if you don’t see a map in the list below, that does not mean that we don’t intend to change it later on. 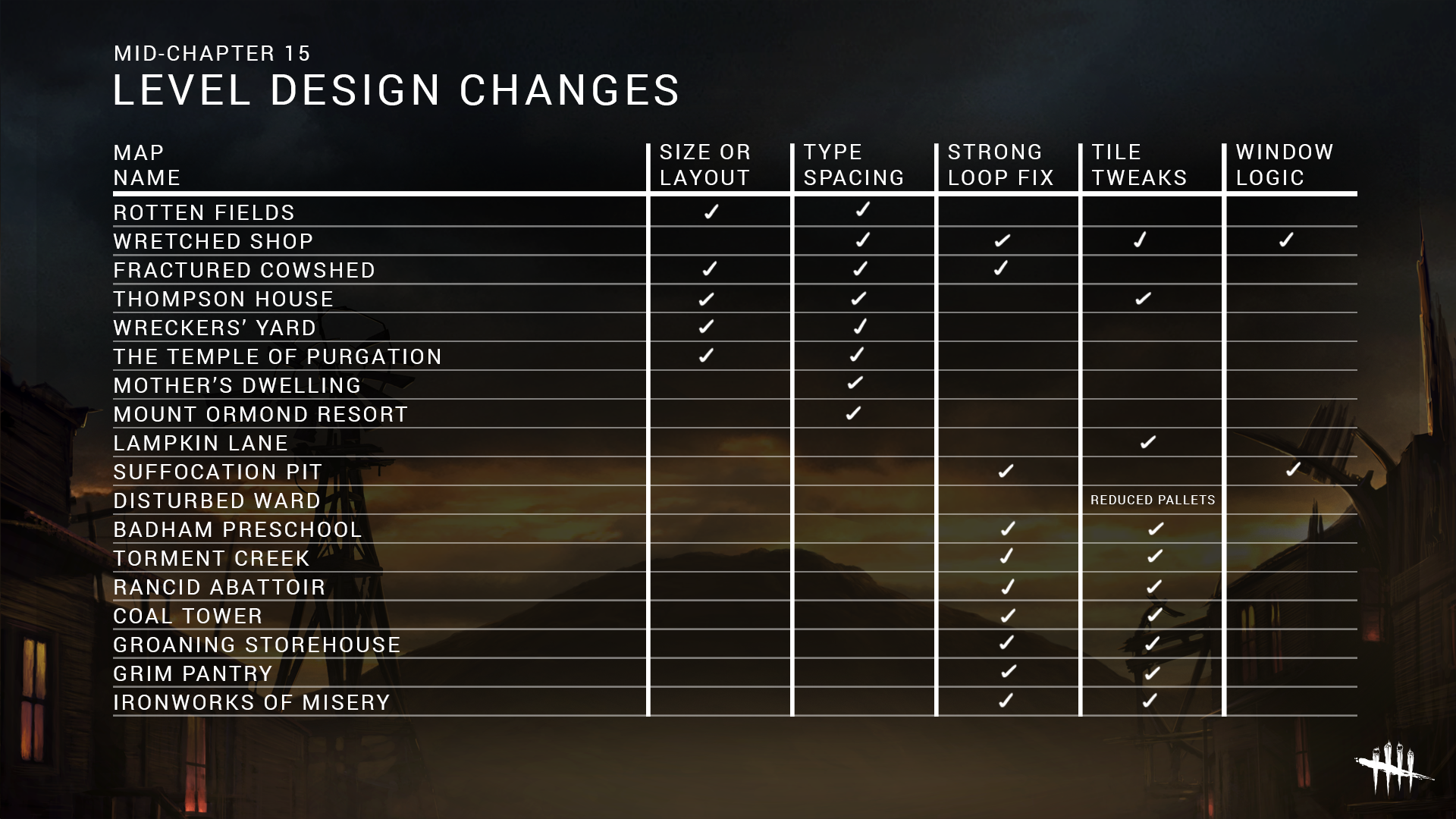 Finally, we want to leave you with a few teaser screenshots of what you can expect to see in the Player Test Build (PTB). 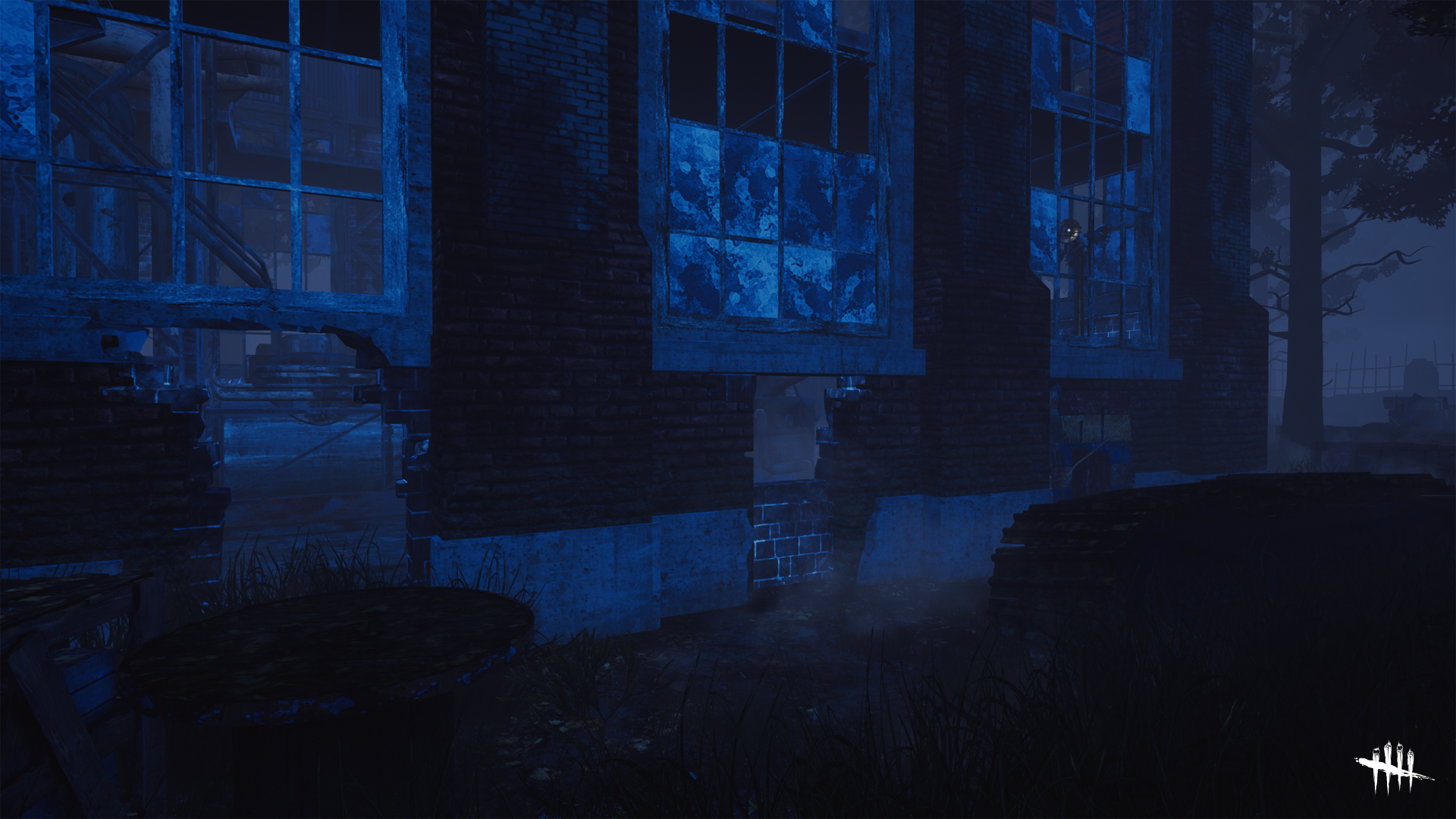 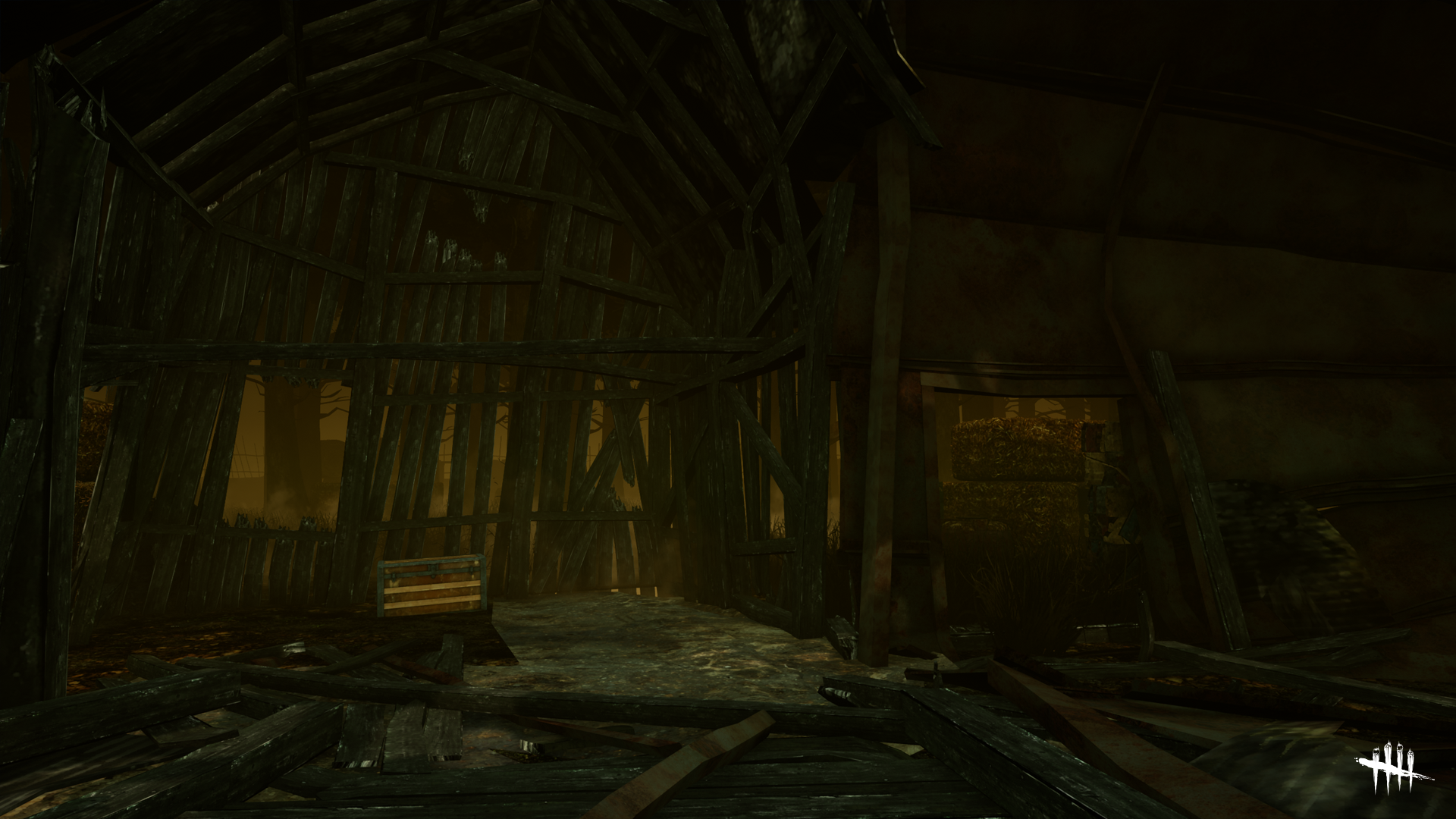 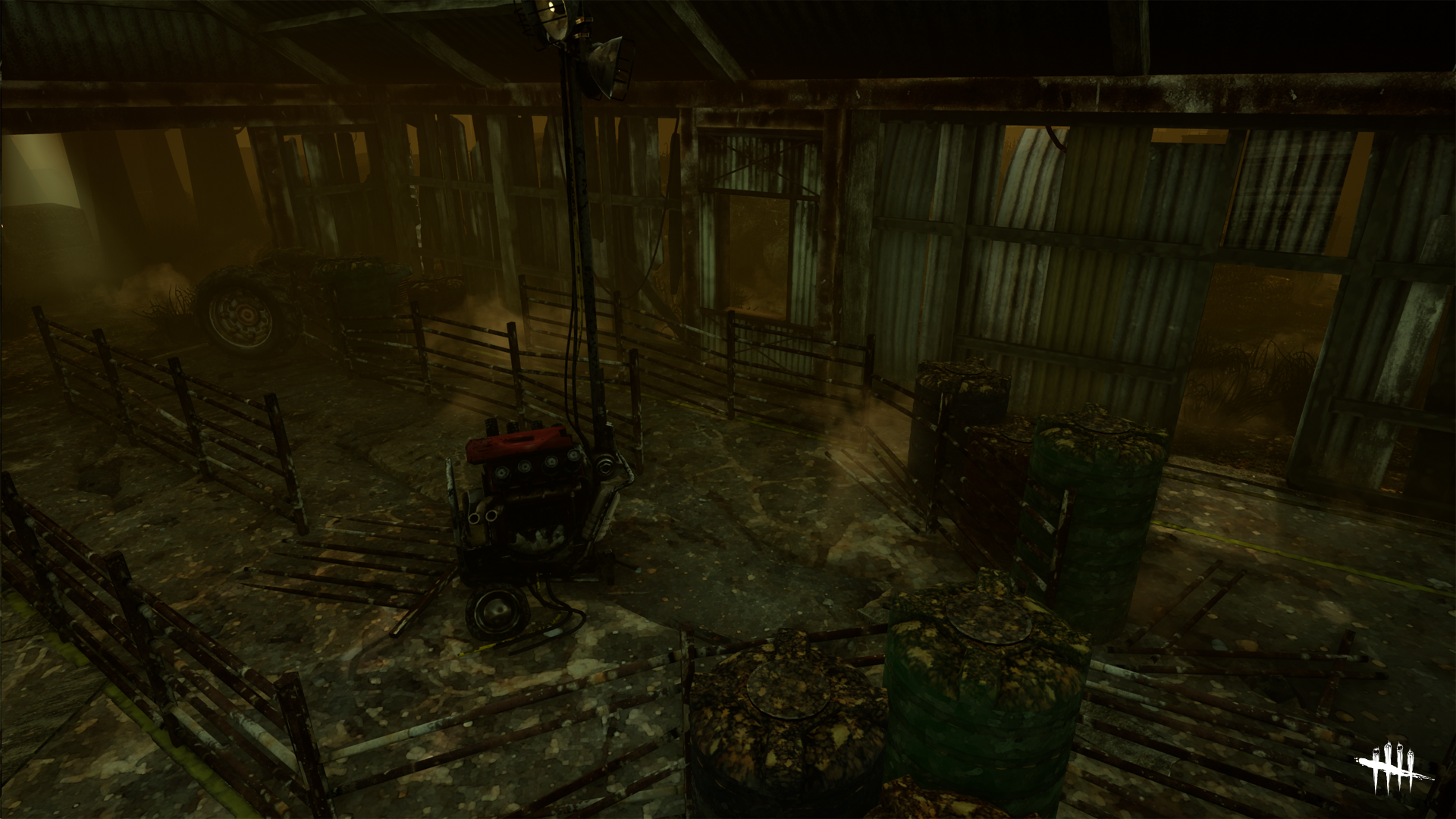 This one is for all the console players out there (and those of you playing with a controller on PC too): Starting with the mid-chapter update, the maximum controller sensitivity is being nearly doubled. If 100% sensitivity just wasn’t cutting it for you, you’ll now be able to turn faster than ever. If you’re happy with your current sensitivity, don’t worry, lower sensitivities aren’t going anywhere.

To close things off, we also have a few smaller quality of life changes on the way for 3.7.0.

One of the common mistakes new players make is attempting to escape the first time they are hooked. To make the risk more obvious, we have added visual effects and audio to make it clearer that failing an escape attempt is hurting you and speeding up the sacrifice.

The perk icon for Head On will now light up with a timer (similar to Inner Strength, for example) to show when it will activate. This will give you a better idea of when it will be ready to use.

The mori animation will now begin to play once a short interaction is complete. At this point, the Killer is locked into the animation until it is finished. This prevents the mori from being cancelled repeatedly to annoy someone.

A few months back, we made some improvements to protection hits to help ensure that they are awarded consistently. While those changes had a positive effect, we took a moment to make further improvements to the system. Now, coming within range of an injured Survivor will have a lingering effect, allowing you to get a protection hit a few seconds after the injured Survivor moves away.

All the changes mentioned in this post will be available to try in the Player Test Build, which starts tomorrow April 7th. This brings us to the end of the April Developer Update. We’re excited to see what you think once you’ve had a chance to try them out!