kazzymoyashi Member Posts: 97
May 2020 edited May 2020 in Submission - Design your in-game cosmetic 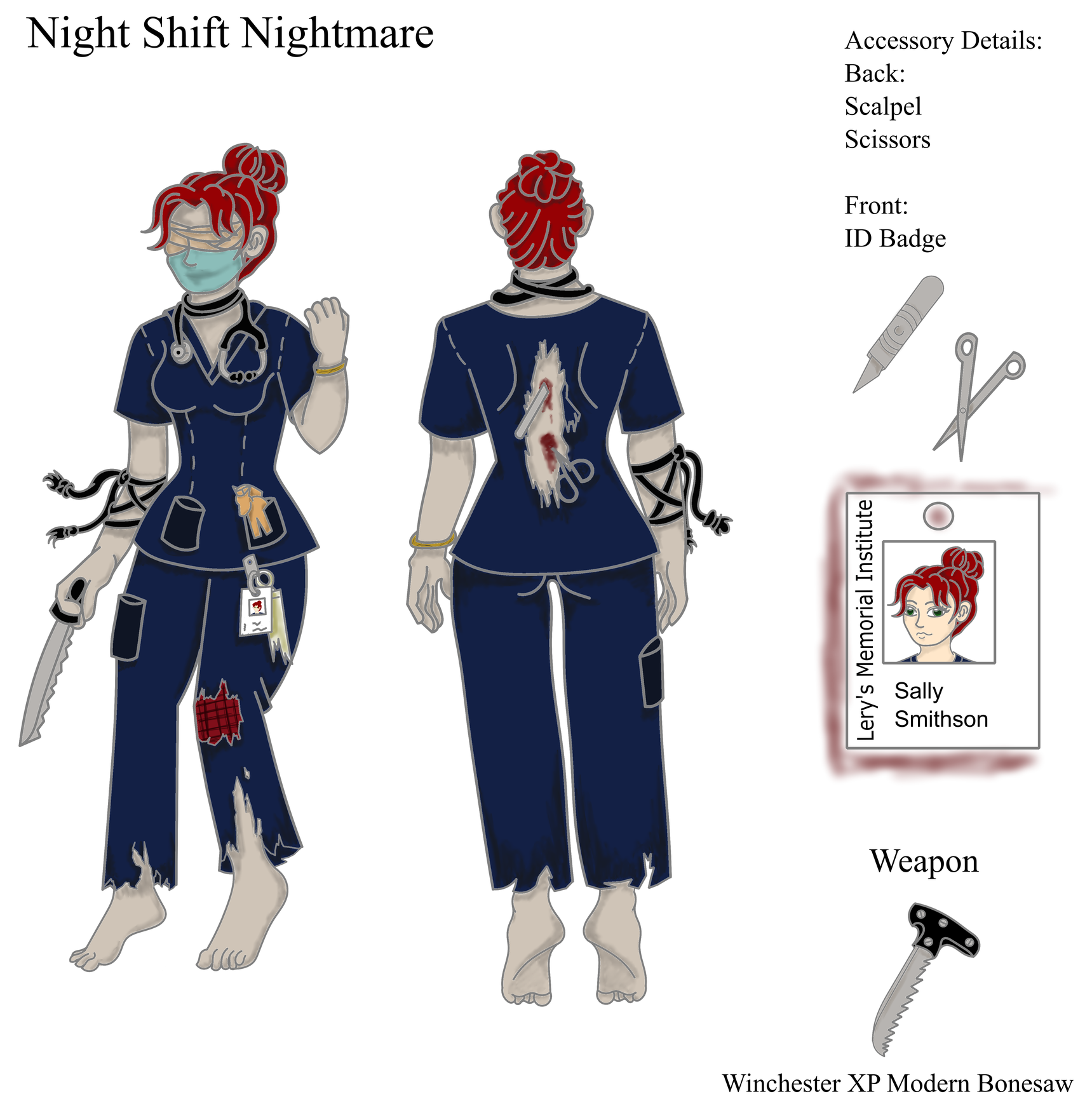 The name of this skin is: Night Shift Nightmare.

She is a nurse who works at the Crotus Prenn Asylum during the day, but then works the night shift at Lery's Memorial Institute. She adorns the classic scrubs as per hospital mandate, alongside her ID badge from when she existed in the mortal realm. She has a few keepsakes on her from her days at the Asylum - plaid flannel patch, wooden horse toy, torn bookmark, dull bracelet, and a dark cincture; all of which were possessions from her favourite patients.

I envision her having blood splattered all over the cosmetic - especially on her right hand and the bonesaw itself. However, I did not like how the blood was turning out when I was trying to add it to the design.

Head: "Bloody Nightmare" - Her hair, deeply crimson, is the only distinguishable feature about her.

Body: "Adornment of Keepsakes" - With each part of her sanity being lost, she collects a keepsake to remind herself of her former life.

Weapon: "Winchester Bonesaw" - The serrated blade is said to slice through a human arm within minutes, but not without screams of absolute agony with each push and pull of the blade.

Sally Smithson tried. She had tried so hard, but it did not matter. The money was not there. Yes, she had regular hours at the Asylum and truly enjoyed her time there, but it was not enough; it was never enough for a woman of her caliber. Her days were filled with caring for the Crotus Prenn Asylum patients, which meant only one option for another job: night shift at the Lery's Memorial Institute.

Everyone spoke highly of Lery's from the politeness of the staff to the effectiveness of the treatments, especially those performed by Dr. Carter...with one exception. A rumour was quickly spreading of the night shift nurse. Shortly after Sally had begun her time as the head nurse on the night shift, people began to mysteriously die. It seemed they had all simply fallen asleep and never woken up. Or so the residents of the area had thought. The reality? It was all Sally's doing. Her work at the Asylum to 'save' patients from their horrible mental health began to trickle into Lery's. Each month, she added a new 'keepsake' to her wardrobe as a little token, a keepsake to remember some of her favourite kills. First, it was a piece of plaid flannel, which she stitched onto her scrubs. Next, it was a little wooden horse from her favourite catatonic boy. Then the dull bracelet of the anxious girl, Mary Jenner. She pulled a bookmark, tearing it in the process, from one of the books at Father Campbell's chapel. Lastly, as many of her patients at the Asylum had died, she adorned the final piece of her wardrobe - the dark cincture - as a sign of mourning. She was mourning the loss of her patients, the loss of her sanity, and it showed.

With the loss of her sanity, the rumours grew louder, more frequent. When finally, one night, a patient she had hoped to suffocate to death with her bare hands decided to strike. The male ambushed her when she went to enter his room, stabbing her in the back with the scalpel and scissors he had at his disposal. Of course, Sally tried to fight back, but to no avail, the male had grabbed hold of her stethoscope and wrapped it around her neck further, pulling tight. In her final moments, Sally gasped for breath, clutching at her neck. Darkness slowly crept at the edges of her vision. Was this it? Was she truly going to die here? Her final thoughts rang through as the darkness took the form of spider-like appendages. The male was pierced through his chest and flung aside, instantly dead. Sally laid there, gasping for breath, and reached out for the claws that were closing in on her. As she drew her final breath, her body was enveloped in darkness, and her body was never found.

Her 'death' was not in vain, for the story of the Night Shift Nightmare Nurse continued on in her wake as she began her new life in the Entity's realm, seeking to murder any humans within sight, especially with the very stethoscope that had claimed her life.