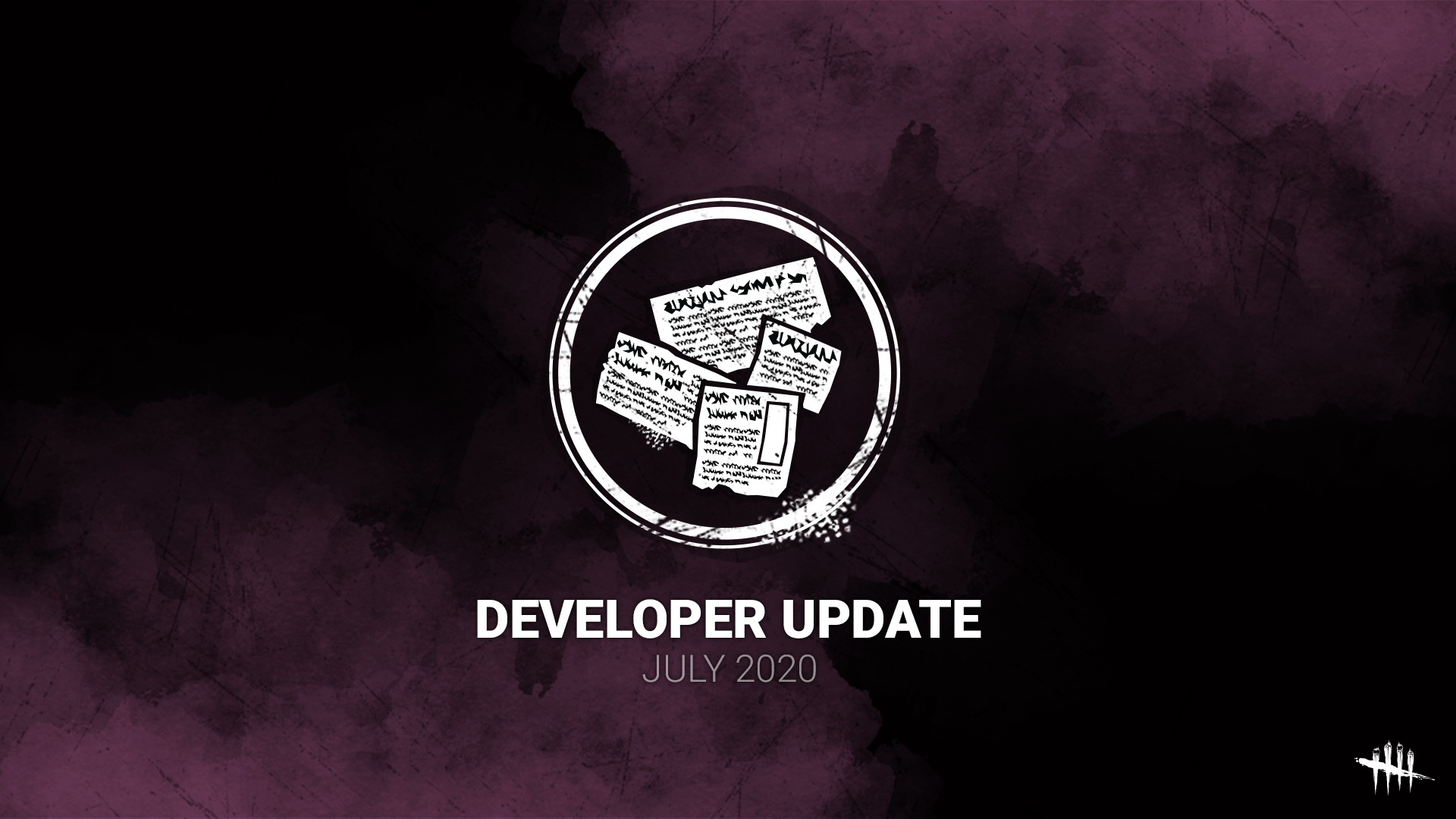 We’re back with another Developer Update, a series of blogposts detailing various changes coming to Dead by Daylight in the near future. This time around, we’re diving into everything chainsaw related, as well as some quality of life improvements coming to the game.

In the 4.1.0 update, we’ve taken some time to revisit Leatherface, as well as some of his perks and his add-ons.

First, The Cannibal’s chainsaw now activates like the Hillbilly’s, rather than needing to be fully charged and then released. This small change prevents instances where you release the button a sliver too early and cancel your chainsaw accidentally. You won’t want to hold it for too long, though, or else Leatherface will go into a tantrum.

Bubba’s Chainsaw now has three charges by default. When starting your Chainsaw Sweep, one of these charges will be consumed. Pressing the power button again while the sweep is active will refresh it and consume another charge, allowing you to continue using your chainsaw for another two seconds. You’ll want to assess the situation carefully, though: Each charge you use will also extend the tantrum and missed attack cooldown, so using more charges can backfire if you’re not able to follow through. Charges refill automatically at a rate of one every few seconds.

Additionally, Leatherface’s maximum movement speed while using his power has been increased from 5.06m/s to 5.29m/s. This, in conjunction with the other changes mentioned above, will make The Cannibal feel much better to play as and much more threatening to play against.

Here’s a preview of the changes in action…

We’ve done a pass on The Cannibal’s add-ons, with nearly all of them receiving some sort of change. These changes will modernize his add-ons and bring them in line with the standards for Killer add-ons, which are:

There’s far too many add-ons to list them all here, but here’s a few examples of what you can expect: 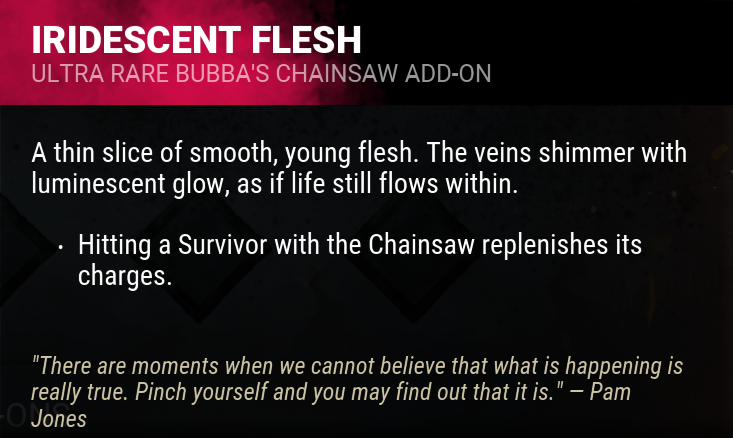 We’re looking forward to seeing what you guys can do with these new add-ons!

Finally, we’ve reviewed some of Leatherface’s perks to make them more appealing.

Your vicious attacks make the Survivors drop their item on impact.

The lost item will be consumed by the Entity after 120/100/90 seconds if it is not picked up before the timer runs out.

Survivors put into the dying state by your basic attacks are not revealed to other Survivors when they are standing outside of a 32/24/16 meter range.

During this time, Survivors are affected by the Blindness status effect.

Keeping with the theme of everything chainsaws, The Hillbilly is also receiving some changes in this update. For the most part, we are happy with the way The Hillbilly performs. His power is very versatile, allowing him to quickly traverse the map, zone out Survivors and instantly down them. From a Survivor’s perspective, there is also a reasonable amount of counterplay, leading to interesting chases where the best player often comes out on top.

Given that we’re already pretty happy with the way The Hillbilly performs, the changes to his base kit are minimal. We are not removing any of the options you have with his chainsaw (traversal, feathering, curving, etc.). Instead, we want to focus on the skill-based gameplay and put an emphasis on using your chainsaw effectively, only adding a small drawback to misusing your chainsaw.

If the Overheat meter fills up completely, it can no longer be used until it has completely cooled down. When this happens, it will cool down at an increased rate. If the chainsaw overheats as you are sprinting, your sprint will not be interrupted.

The goals behind this change is to add a small drawback to misusing the chainsaw, and to add a bit more depth to the chainsaw with resource management.

Check out the Overheat mechanic in action…

Like The Cannibal, we’ve done a pass on The Hillbilly’s add-ons and brought them up to date with the rest of the roster. Once again, we can’t list all of them here, but we look forward to seeing what you can do with them! 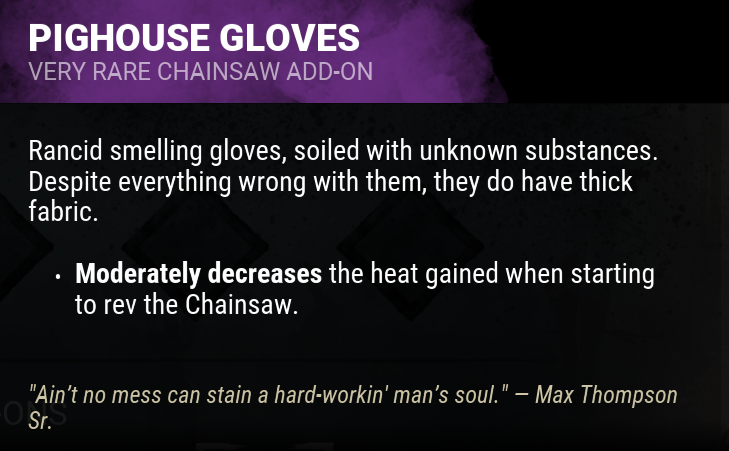 We’ve also taken the opportunity to revisit two of The Hillbilly’s lesser used perks and spruce them up.

Unlike other beasts of The Fog, you have adapted to light. You are immune to blindness caused by flashlights and firecrackers. Survivors that attempt blinding you have their aura revealed for 6/8/10 seconds.

When a Generator is repaired to 70% repair progress, it triggers a loud noise notification and you are granted the Undetectable status effect for 12/14/16 seconds.

Currently, hits are handled on the Killer’s end. If they appear to be within range of a Survivor, they will be able to hit them. In most cases, this works well: The Killer is able to reliably hit Survivors, and the Survivors see roughly the same thing on their end with a small amount of latency. If the Killer has a weak connection to the server, however, it can cause some strange looking hits that appear to be out of range, most notably at pallets and windows.

During this upcoming Player Test Build (PTB), we’ll be testing Server Side Hit Validation. Any time the Killer hits a Survivor, the server will check and see if the hit was possible within a reasonable margin. If the Survivor was too far to be hit, the hit is negated.

To put it simply, if you have a stable connection, you won’t notice any difference as the Killer. Your hits will still appear instantaneously and should not be rejected. As a Survivor, however, a Killer with a weak connection should no longer be able to hit your from further away due to their high latency.

Second, we'll be increasing the tick rate of our servers from 30Hz to 60Hz. Basically, this means that the servers sends out information twice as frequently as before, so what you see as a result is more accurate.

We will be monitoring these changes closely over the course of the PTB before proceeding further.

Last but not least, a new promo code system will appear in the in-game store. This system is exactly as it sounds: It allows you to redeem a promo code for in-game goodies on any platform.

Starting will the mid-chapter update, you’ll notice a “Redeem Code” button in the featured page of the store. Clicking this button will bring up a menu where you can enter your promo code to unlock a reward. These rewards can be anything from clothing to Bloodpoints, or even Auric Cells.

Keep your eyes peeled once this system goes out, you’ll have a chance to get some codes soon!

This brings us to the end of the July 2020 Developer Update. All of the changes and new features mentioned above will be available for testing in the Player Test Build, opening Tuesday, July 7th Wednesday, July 8th. We look forward to hearing what you think once you’ve had a chance to try them out!