Home› Dead by Daylight Forums› Discussions› Off-topic
We've been made aware of error messages when attempting to purchase the Rift pass. The team is currently investigating, and we'll post an update as soon as we have more information.

Some of My Favourite Models from Warhammer 40k

LONG POST WARNING - Well, this is me posting this but there are a lot of pictures that I've had to add here.

So, in my spare time (aka daylight.......) I tend to paint Warhammer 40,000 miniatures. A LOT of miniatures. Today, I just want to share some pictures of what could be considered some of my favourite miniatures to paint to this day. Yes, all of these belong to Chaos, but I do have several more armies. The reason that I DON'T include them are as follows:

Necrons - The only model that I am really impressed by was my Tesseract Vault, but that thing was a nightmare to paint.

Thousand Sons - I love Magnus, and he did nothing wrong, but didn't love his model enough to put here.

Tzeentch Daemons - I don't have a Lord of Change. I have some Daemon Princes and a squad of Pink Horrors.

Harlequins - Favourite faction to play, not so much to paint.

T'au Empire - My favourite Riptide is in various pieces and in different boxes. CBF to find them all.

Blood Angels - I'm doing my own successor chapter, but I don't have many models. That and they're Space Marines. Everyone knows them!

Orks - I have none built. They're all in my pile of shame.

These photos aren't the greatest quality, as they were taken in my room at night with my phone camera, so some of the detail may be missing.

ANYWAY! My favourite model to paint to date surprised even me. Normally I'm a pretty devout follower of Slaanesh, but I loved painting this model way more. 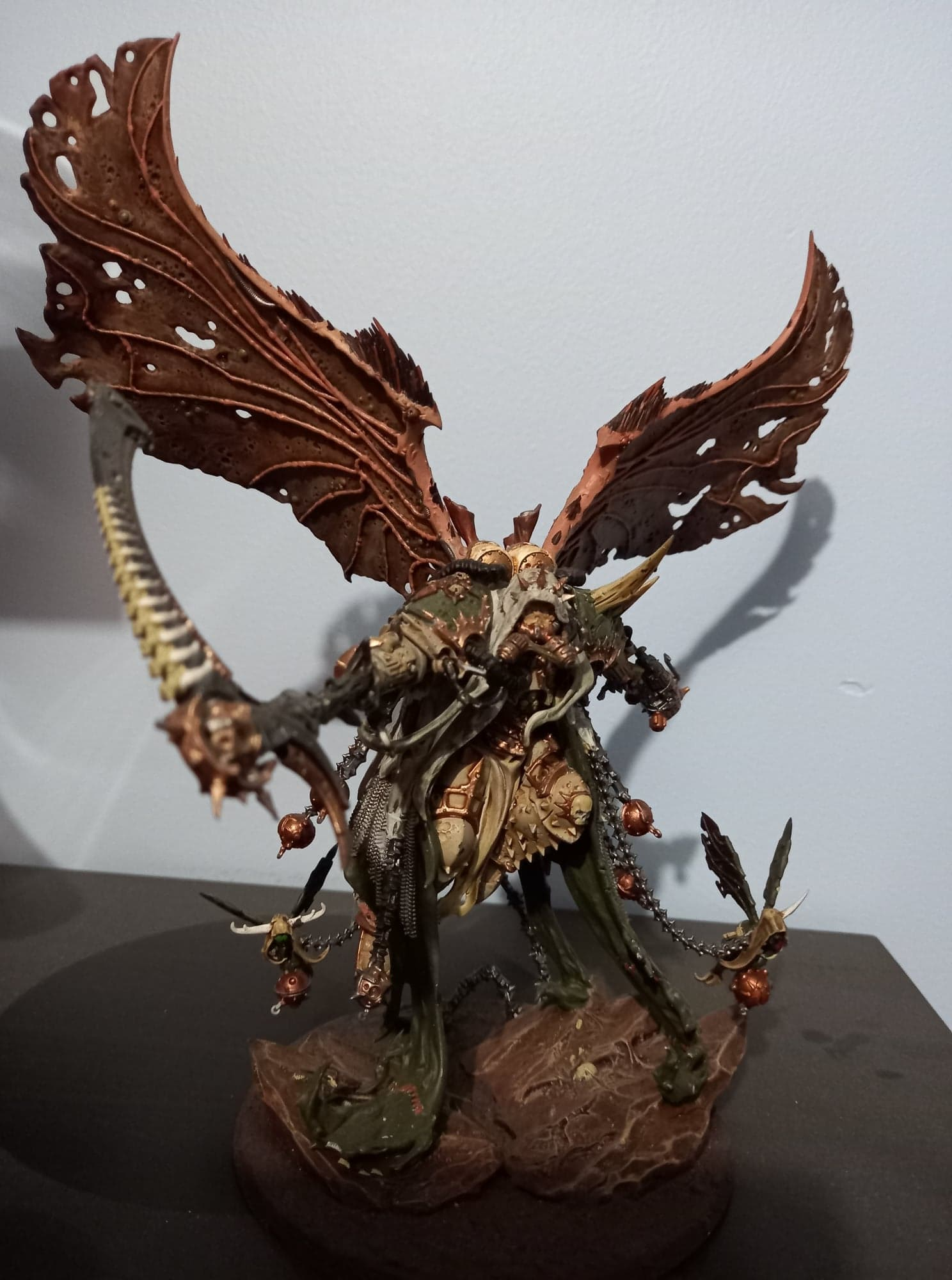 MORTARION - Daemon Primarch of the Death Guard legion. This piece of work took me the single longest amount of time to paint, besides being almost only WASHES. The wings took up a good 75% of my time painting him, and were done over the course of two weeks. So. Much. Drybrushing.

Next on my list are a few Slaanesh models. First is a generic Keeper of Secrets, followed by the named version, Shalaxi Helbane. 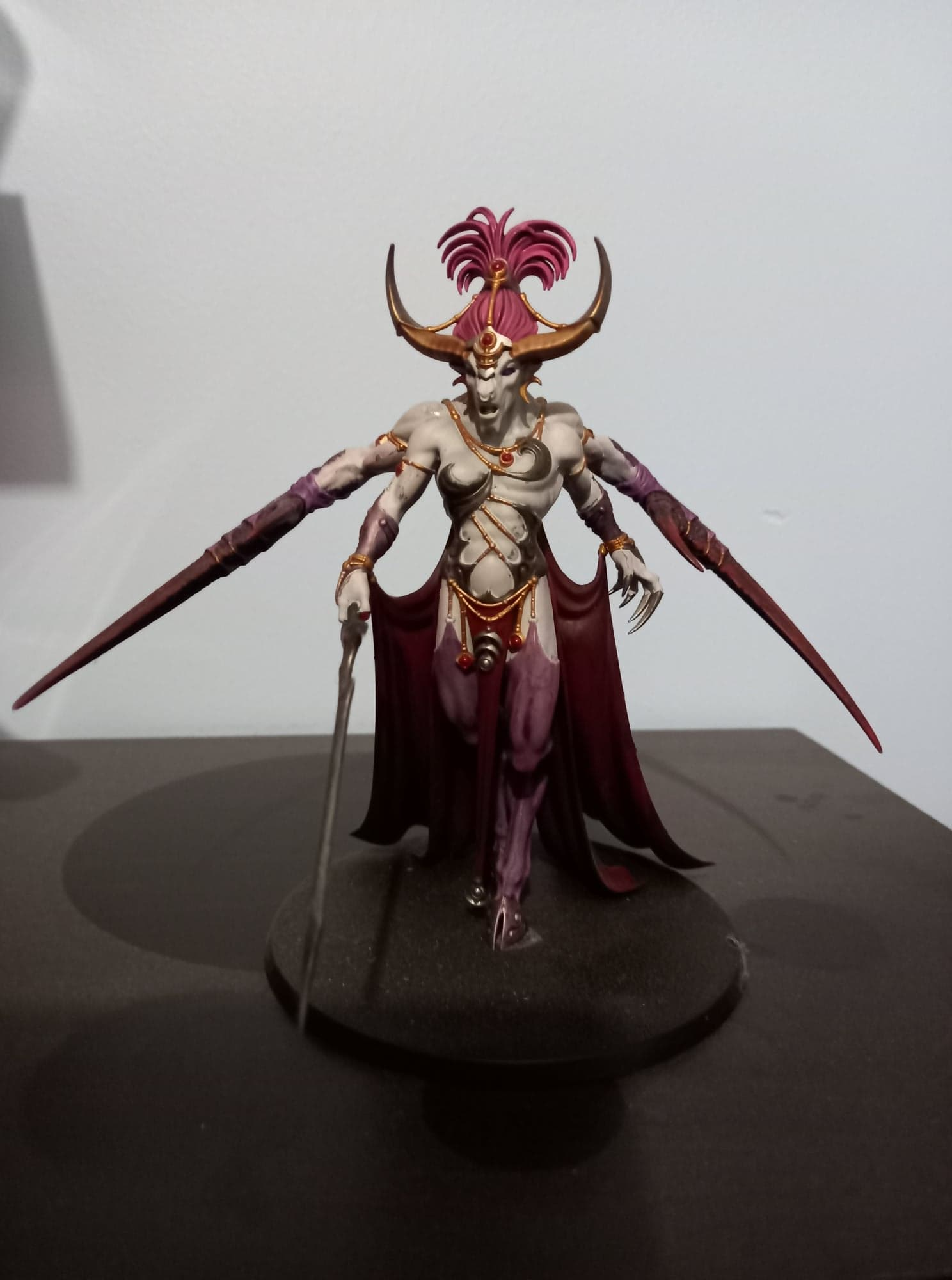 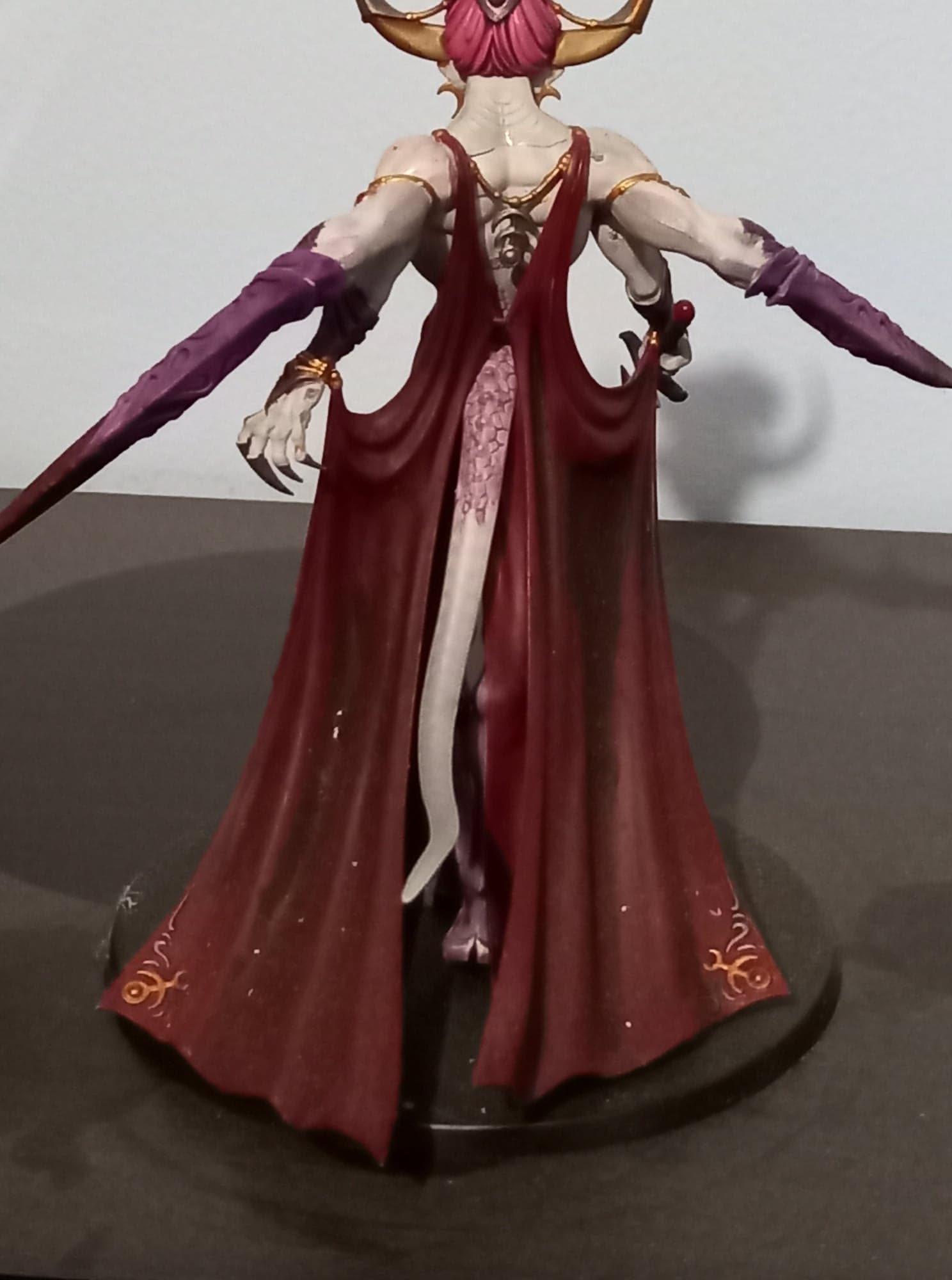 Next is another Nurgle creation. After doing weeks of smooth and tiny Harlequins, I decided to go full body horror and pick up my first Great Unclean one, who I have lovingly named Hughmungous Chungus. 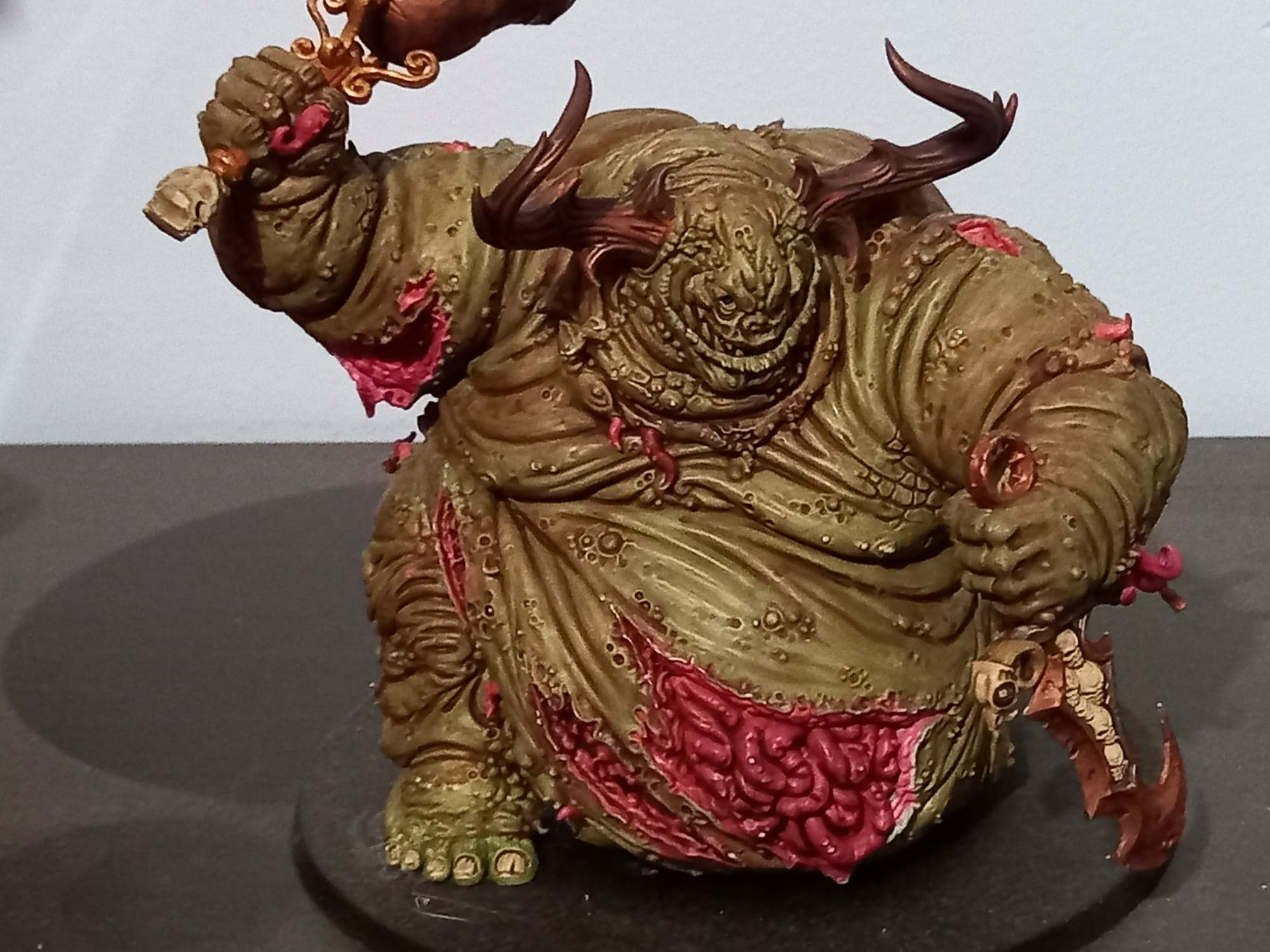 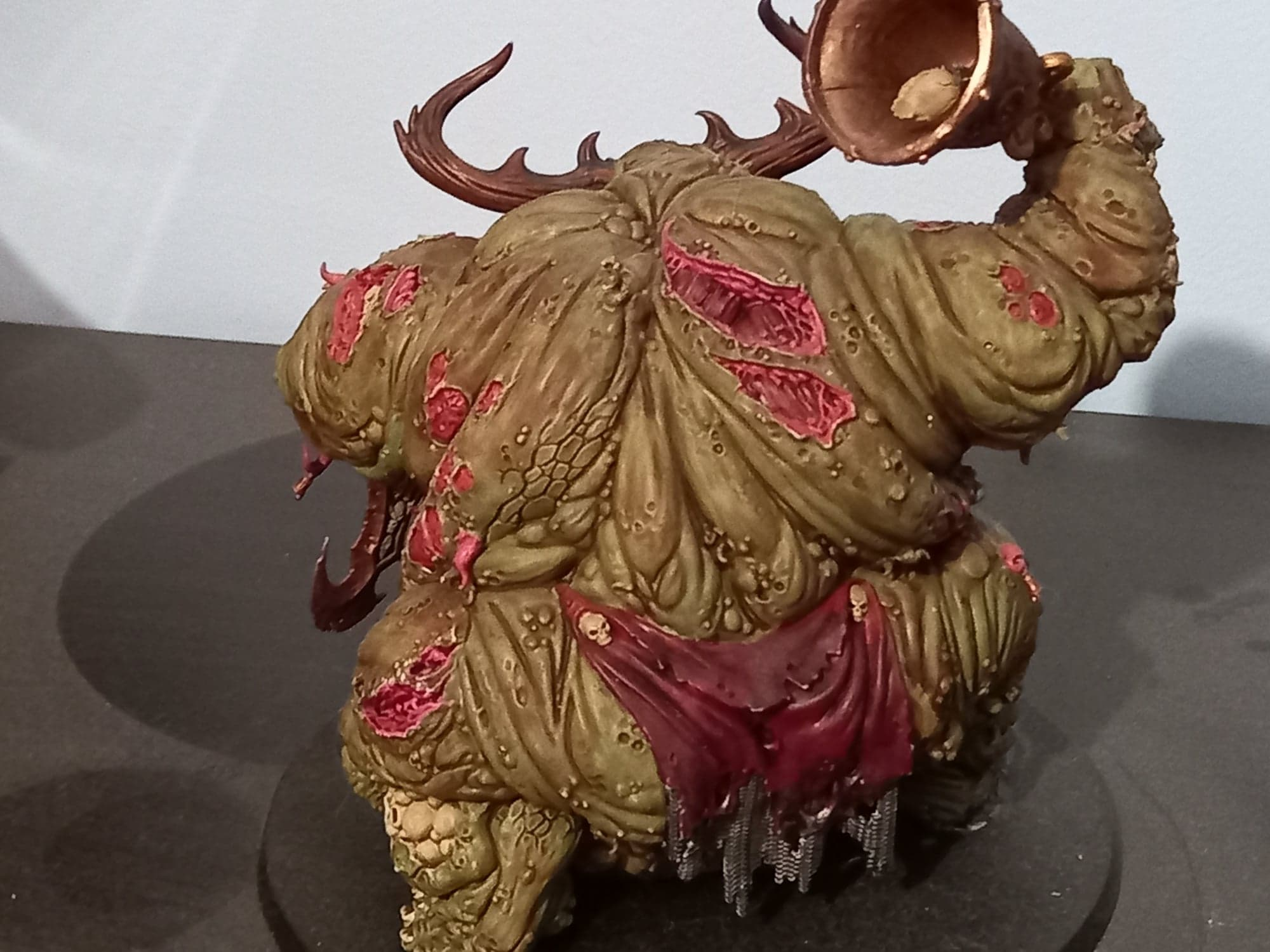 Plague, eat your heart out.

Moving away from the giant daemons, I've also done some fantastic smaller characters. First up, I'll show off Abaddon the Despoiler, Warmaster of Chaos and leader of the Black Legion and his daemonic sword, Drach'Nyen. 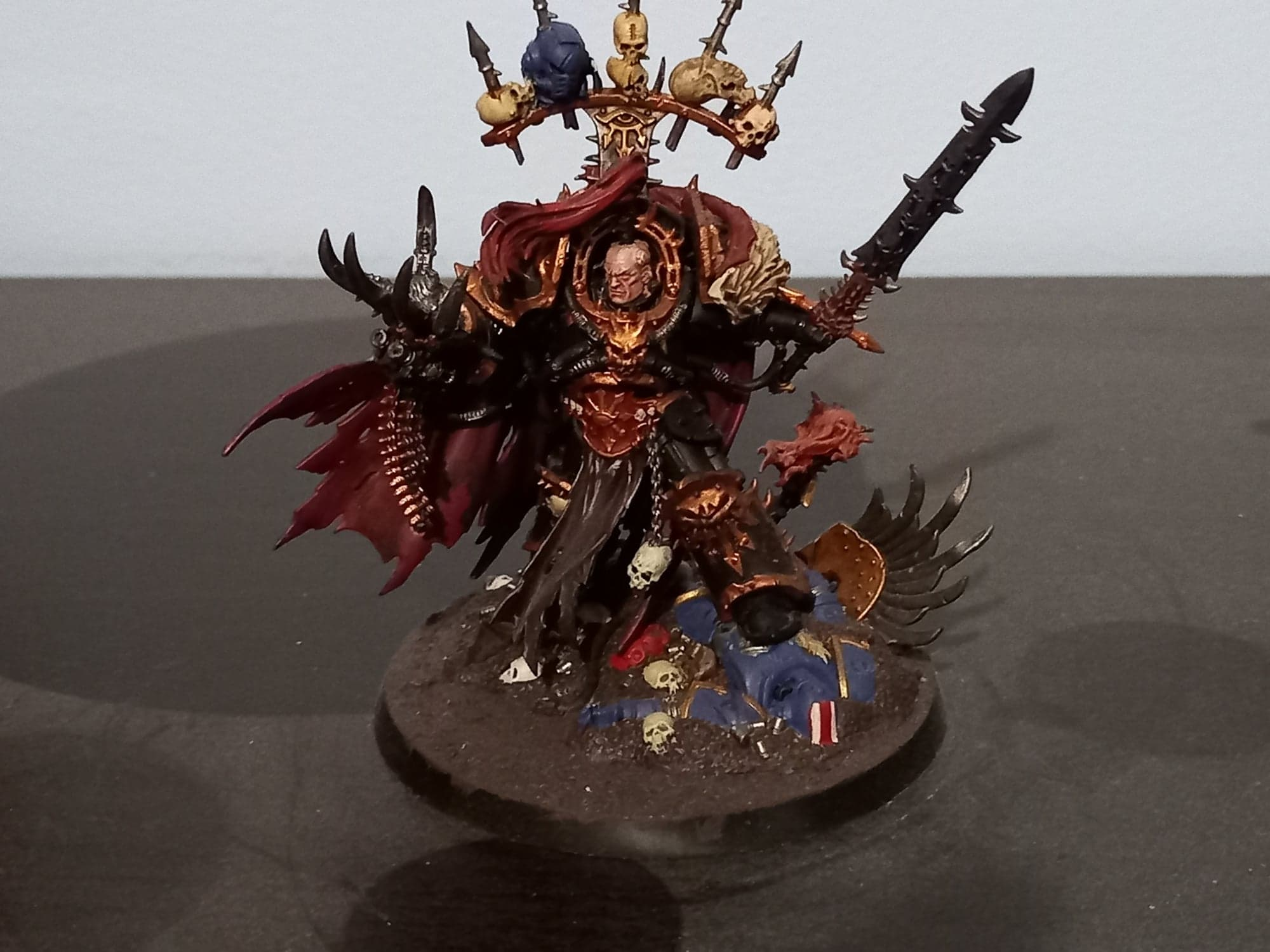 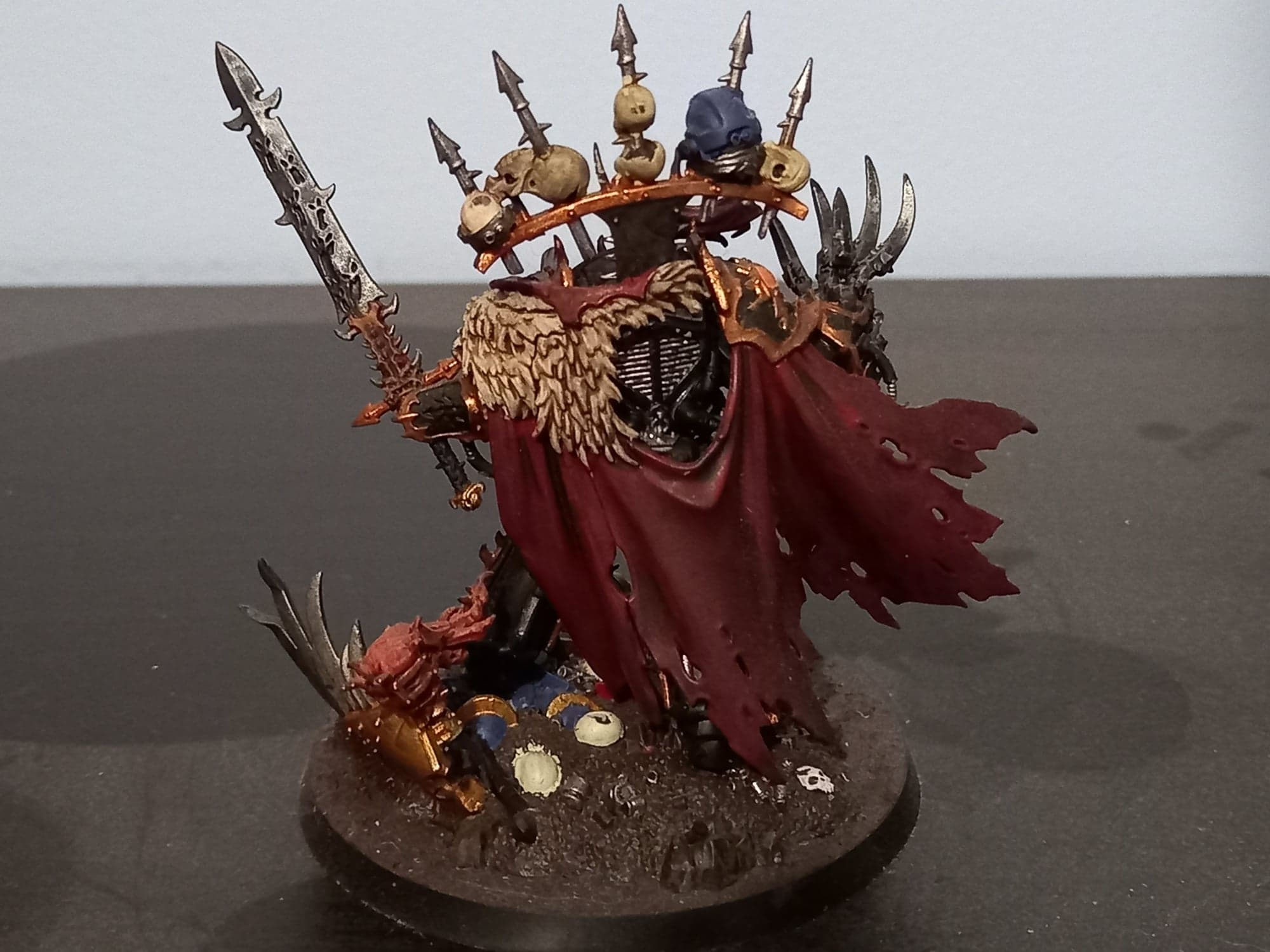 With the recent re-release of the model, I've also done Fabius Bile, the Clonelord. 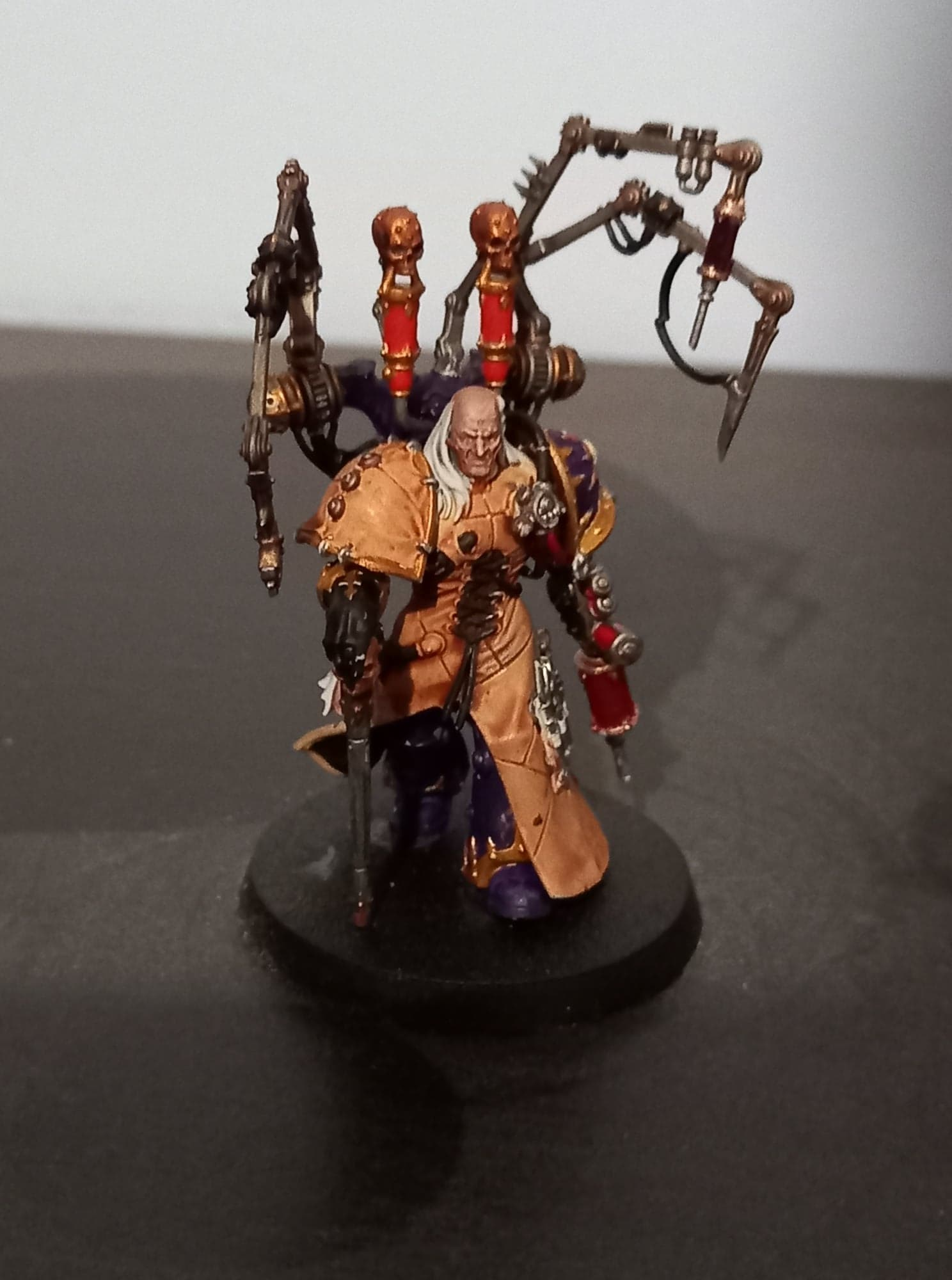 Finally for today I'll also show of the Bloodthirster, Skarbrand and his twin axes Slaughter and Carnage. 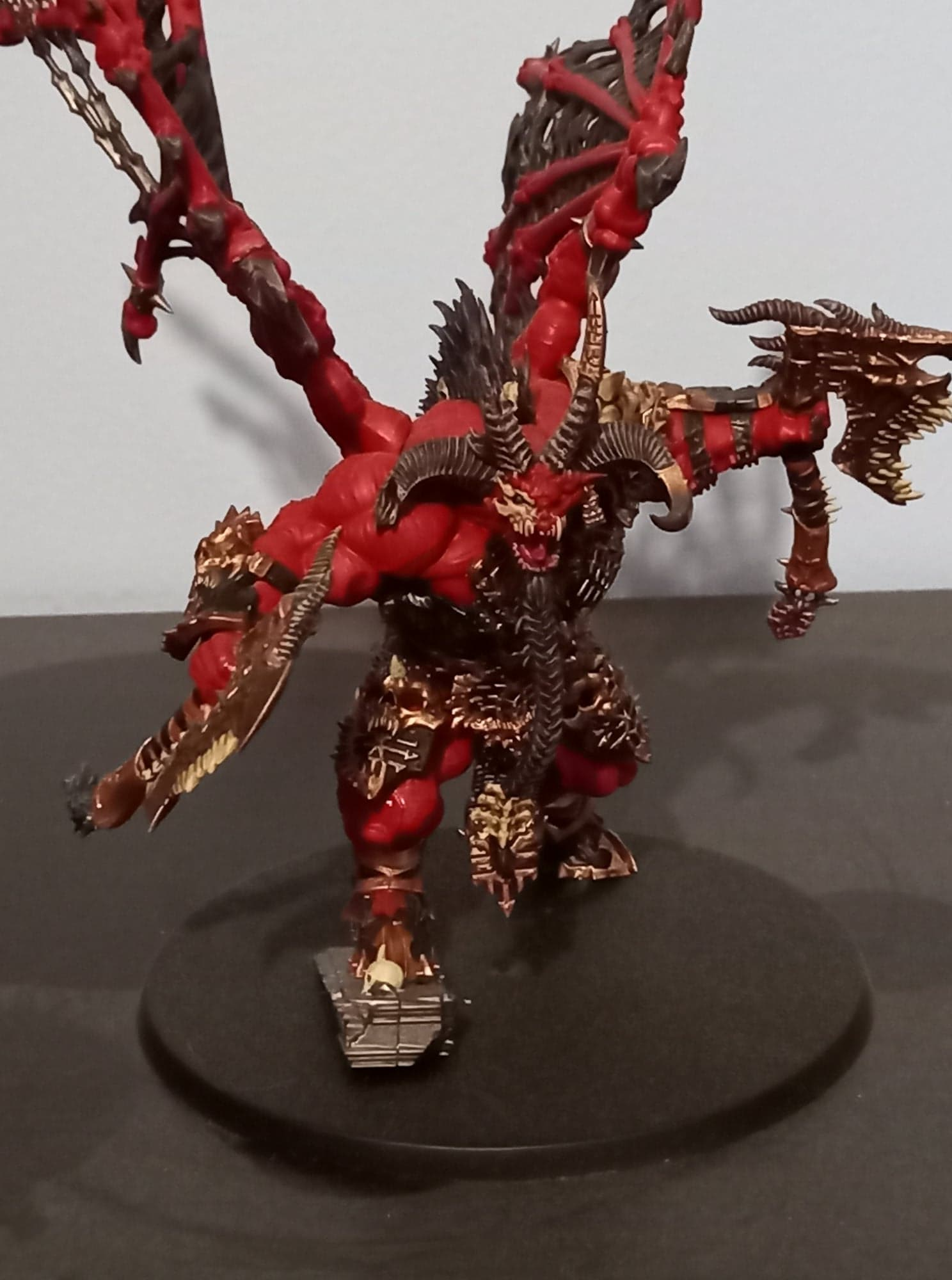 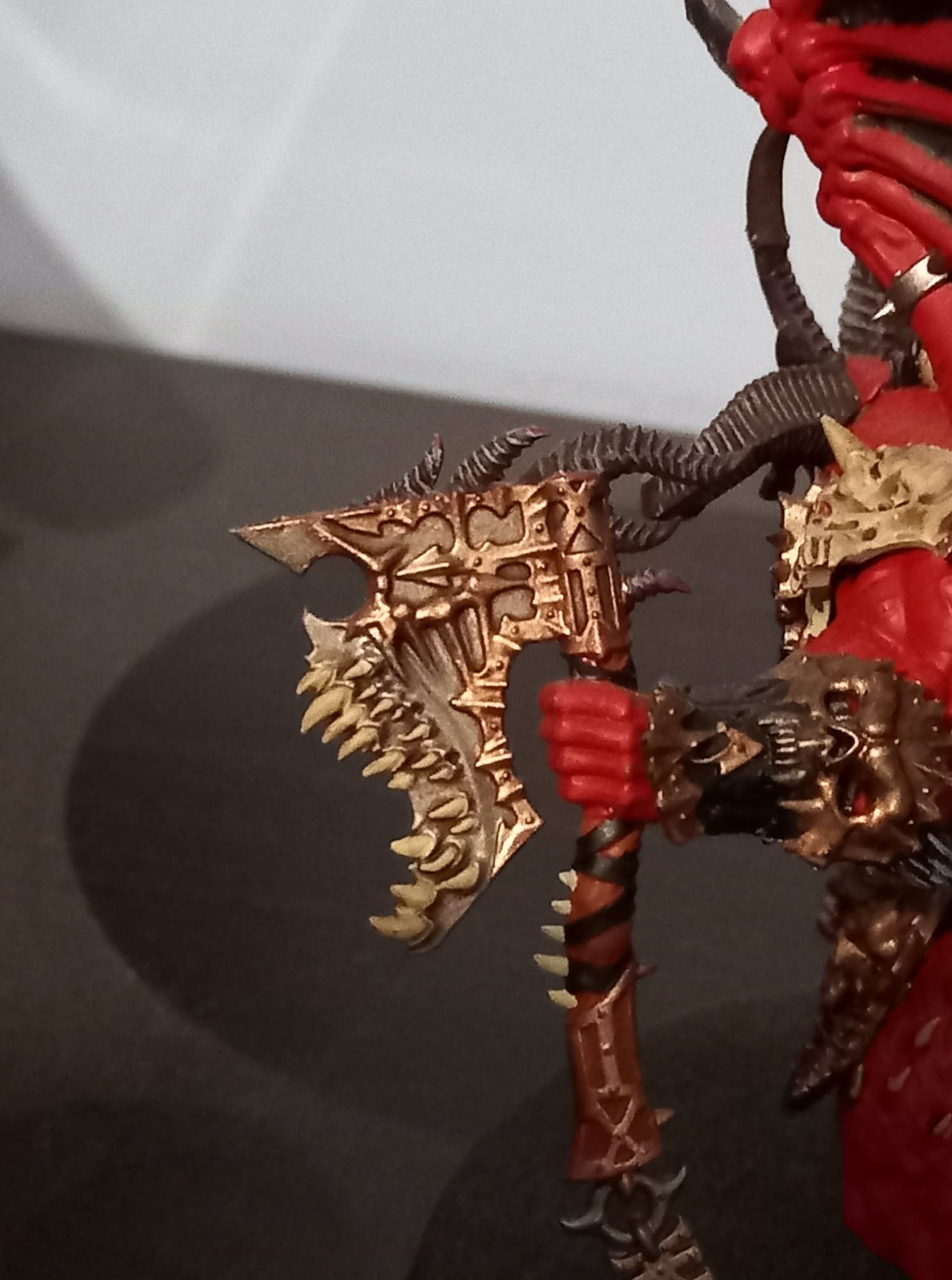 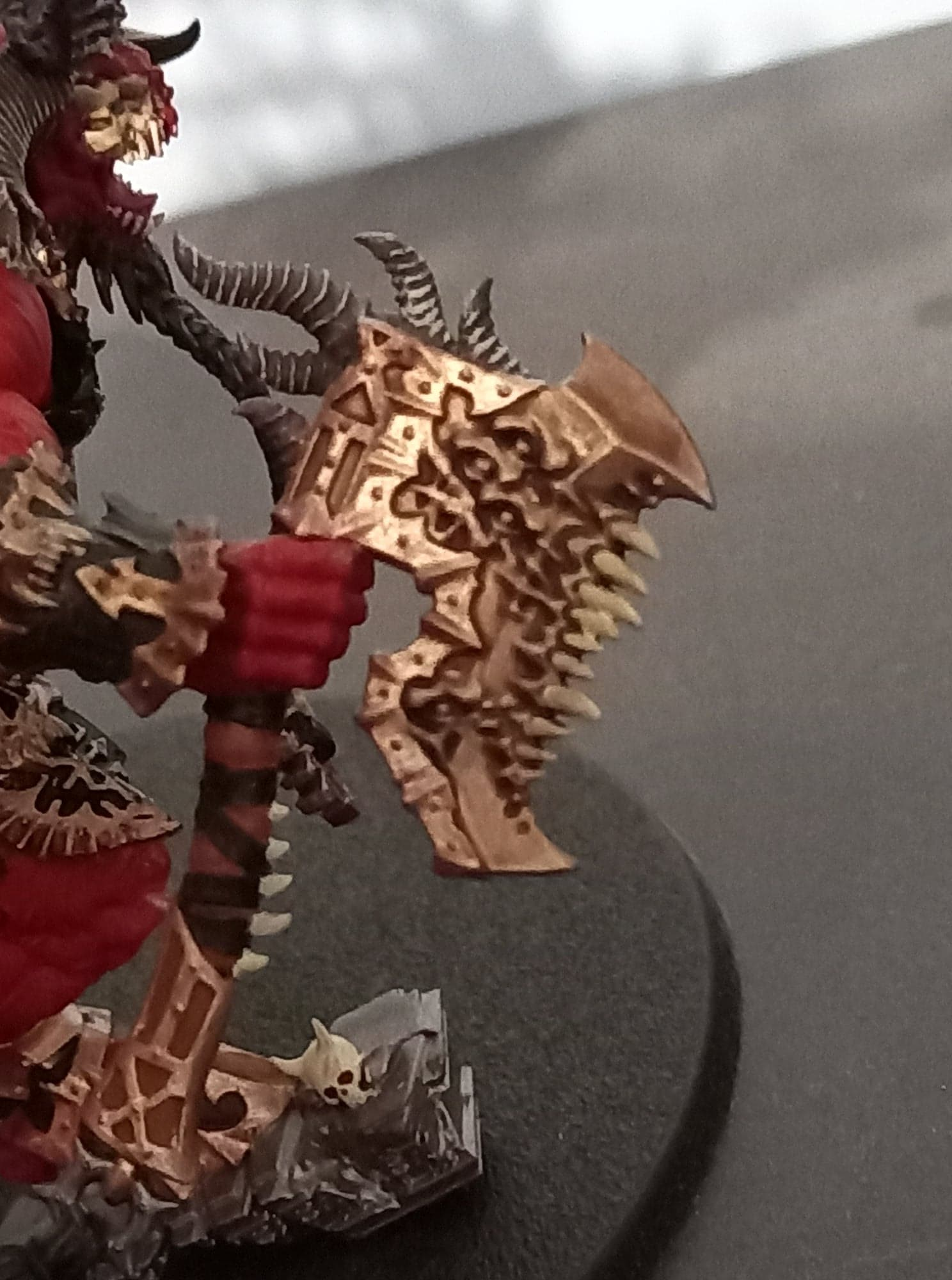 Just a little something from my happy place. These are not my own original creations, they are kits that I did have to assemble myself, but I did also have to paint them all. Some of these, like a basic Marine, I can probably do in about 30 minutes or less. All of the models here have taken several days to weeks in some cases. For a size comparison, Fabius Bile is the smallest model here, on a 32mm base. He's about the size of one of the small guys in this comparison photo: 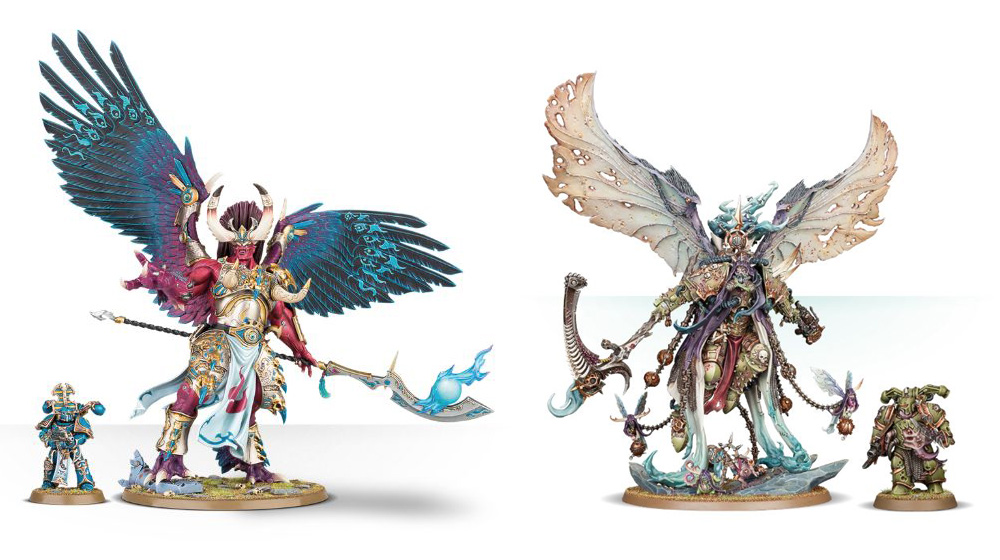 Abaddon's somewhere in the middle, but on the smaller size. THIS is why they take so long!

Thanks for getting through all that. I've alluded to my love of this hobby, but never shown anyone on these forums my work before. Here's a sneak peek into that.