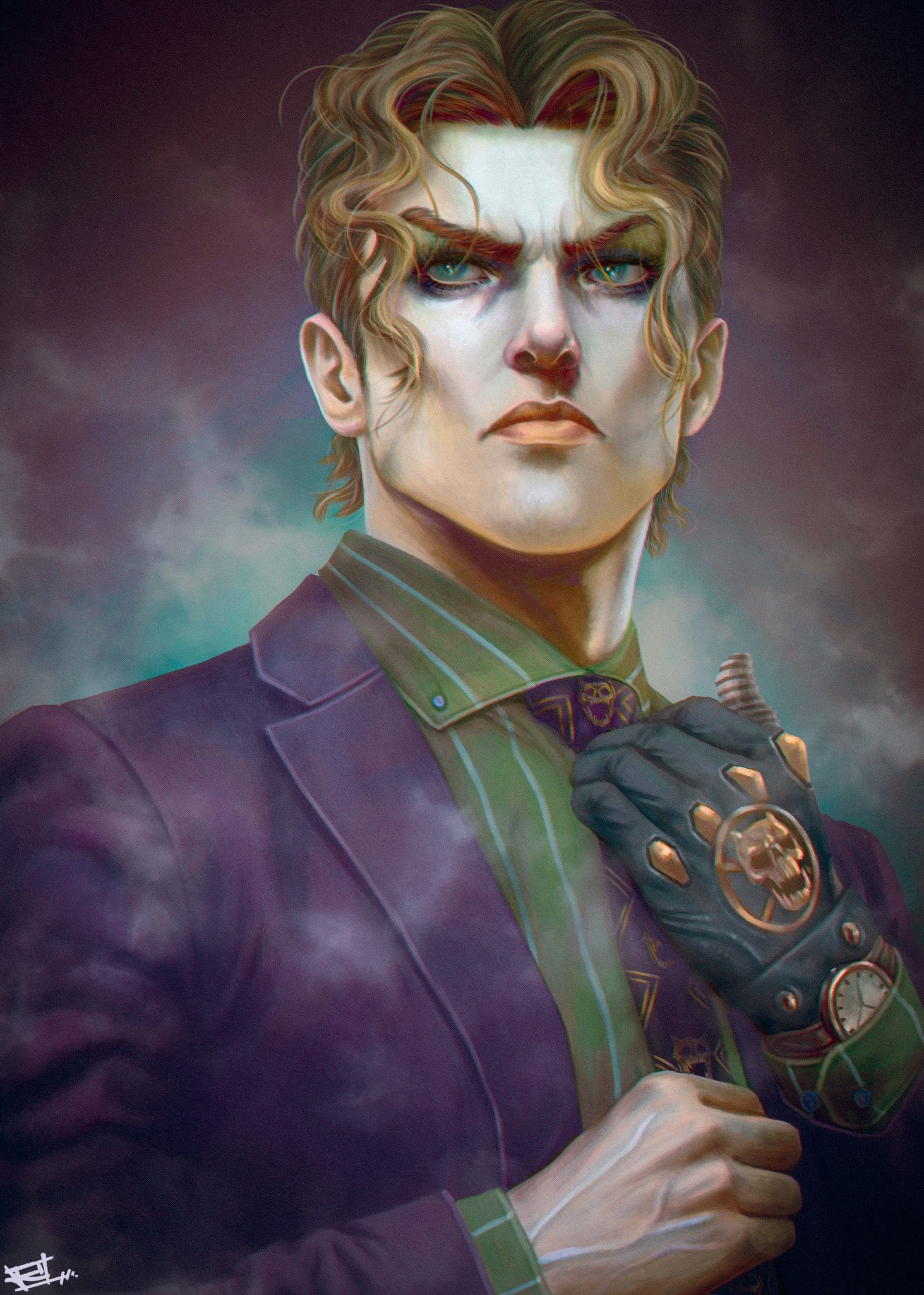 Backstory: A sheltered child raised by two elderly parents, Kira has always been shy, withdrawn, and had battled with intense compulsions. The seeds of his troubled adult hood were sewn when he saw the Mona Lisa during a field trip, it is then he developed a fetish for hands which will later factor into his M.O as a serial killer. When he came of age he begin his career as a serial killer with his first victim being Remi Sugimoto; he was never caught for this murder. Once he gained a Stand that he named "Killer Queen" with the help of his father Yoshihiro Kira, he used his newfound power to explode his victims leaving behind a single hand which he would take as his "girlfriend", once the hand has began to decay he would discard it for a new lover. He continued his antics peacefully until he attracted unwanted attention by murdering Shigekiyo Yangu, which attracted the attention of his friends Josuke Higashikata and Okuyasu. A deadly game of cat and mouse occurred between the two groups that ended with Yoshikage Kira being cornered and having to sacrifice his own hand, which he used Killer Queen to turn it into a bomb in order to escape. He was able to take on a new identity with a new face now going under the alias Kosaku Kawajiri, both in which he has stolen from a victim while on the run. He was able to live life peacefully, something he has always wanted, until his urges returned and he was caught by Kawajiri's son who later aided Josuke in discovering his true identity. A deadly battle raged between Josuke and Kira, but as fate would have it Kira has lost his battle and was dragged into hell which was overseen by Remi who went to heaven afterwards. As the hands tear take him to the burning ember, he hear a soothing voice and soon found himself surrounded by fog when he finds himself in replica of Moriah. Spotting a campsite with a group of strangers, he finally discovers the peaceful heaven he's been looking for with potential new dates.

Power: Yoshikage Kira gained from the Stand Arrow, which was provided to him by his father. He named this entity Killer Queen, along with being vital in eliminating his victims and demolishing his enemies, it is a deadly weapon in the trial. However, that's not the only tool in his arsenal as Kira also discovered a cat that later passed on then merged with a nearby plant after being buried. The cat was revealed to be a Stand user and is referred to as Stray Cat, it could manipulate air bubbles which Kira uses Killer Queen to turn into deadly bombs.

Killer Queen has the ability to turn any object or person into a bomb, in which he can detonate at his leisure. Killer Queen could only rig on object at a time. Killer Queen's abilities work on: survivors in the dying state, generators, pallets only after they have fallen, and even chests. Touching these things after Killer Queen has placed its bomb will render a survivor in the injured state and the dying state if the survivor was already injured prior to touching the bomb. Introduction of new status effect: Rigged.

Stray Cat allows Killer Queen to fire a projectile that consists of an air bubble, it will explode upon contact with a survivor. It has a 5 cooldown between each blast. When in use Stray Cat will give off a "tell" which is basically a loud screech.

M1 Attack: Killer Queen itself will strike the survivor with his hand.

Sheer Heart Attack!-A sub stand that favors a small tank that sports the grisly face of a skull. Upon use of this add-on a survivor starts with the Rigged status effect and there's a countdown of 150 seconds before it activates and immediately remove player from trial, however this could be passed onto another player. Players must pass the bomb between each other all the while trying to survive the trial. Kira however will be unable to use Stray Cat or Killer Queen but he will see an increase in movement speed. "Hey look at me!"-Sheer Heart Attack((Please provide any corrections or suggestions, but this is to mainly serve as a new game mode))

Minako's Hand-A severed hand Kira obtained during his cover as Kosaku Kawajiri from a moment of weakness which later led to his downfall. Grants the ability to insert two bombs.

Mori: Kira will knock down his victim with a heavy blow then gently take their hand in his hands as the body slowly disintegrates. An image of their soul ascending to the heavens as its being blown to pieces will be shown.

Map: Reverse Moriah. Basically the town as shown in the manga only devoid of people. There's plenty to work with fan service wise. The area with the creepy alleyway will play haunting and hellish noises if you turn your back. An abandoned car will play the Moriah jingle if you come close similar to the siren from the Haddonfield map. Completing a gen in Josuke's house will prompt "That's a Baseball!" game to play loudly.

Fan service idea: Kira should be able to collect the hands survivors that are women. A hand for Claudette, Meg, Kate, Julie, and etc similar to how Leatherface collect faces. These could be used as charms. No point in having Kira if he can't find dates. lol

And that was my idea. I plan to explain certain design choices in a reply. I plan on working on a Josuke concept in another post. I hope you enjoy and I am willing to answer any questions you may have.