Ok so this is a small guide for you knew players out there and im gonna teach you some basic stuff on what you should try to avoid both to gain an advantage over the killer but sometimes to favour your team... So here we go

Tip 1: Its a team game!!! For god sake its a team game when someone is looping the killer (killer chasing someone) that players should do there absolute best to waist as much time as possible. So while he is doing that dont stand on the side and cheer like its a football game. You should be on a gen for as much time as possible with a few exeptions... While doing gens try to avoid being 3 on a gen optimal is to do a gen solo, Why? Im not 100% sure on the numbers but i think you get a 10% penalty on repair speed for every player on it. That means when there is 2 to 4 players. So while doing a generator with 2 players the total speed will be 190% instead of 200% (without any perks to boost the speed)

Tip 2: dont be afraid of being injured. OK this one might not be so obvious for the new players out there but heres the deal. you don't always need to run for a heal instantly after getting hit. Dont be afraid of being injured. If you are injured and a generator is on 90% it might be better to do the generator first before healing since you dont know whats gonna happen later the killer might get a kick with a perk that regresses it a bunch.

With this being said dont be afraid of taking a hit too. You have 3 hook stages. When you get hooked you lose a stage and after 60 seconds you lose another. ON the 3 stage you die so when you get hooked for the 3 time you are dead. With this knowledge you can try to make the hook states a little more even. Its better to have 4 players than 3 players. So if you have a teammate thats on his 2nd hook stage and mid chase if you have full health try to run infront of the killer to make him hit you. This will cause him to either change targets to you or give your teammate some more time.

Tip 3: this one is a little hard to do since most new players wont be knowing this. DONT GET 3GENNED!!!

What is 3 genning? a 3 gen strat is when the killer has the last 3 gens on one corner of the map this means that he doesnt have to run so much between the generators and can apply good pressure on all gens at the same time.

So how do you avoid it? Well this will require some teamwork. First of all if the map has a middle gen try to do that generator. and 2nd tip to avoid being 3 genned is to make one generator on one side of the map and then do one on the other side of the map. If you cant just try to have 1 generator with as much distance as possible from the other generators so optimal is if you could get 1 gen on one corner of the map and another on the diagonal corner

Tip 4: Dont care about your rank. This is a team game you will see a lot of players just grinding their rank not helping their team at all if this happens well you can blame that person for the whole match ;) just kidding. But its better if you try to loop the killer than hiding and just taking the hatch. You will improve much faster if you interact with the killers and learn what works and what doesnt rather than hiding all game. When you go down try to think about why you got downed, what you could have done to avoid it and if its just for this killer.

I know this is a guide for survivors so why would i add this one?

Well if you play killer you will understand how he works, what he is strong at and etc. So by playing killer you will know how a killer thinks and you can try to outsmart him.

Ok this one is really important! While you are in a chase you wanna waste as much time as possible.

There are a lot of loops in the game. everything from a junglegym to some houses (most common house being killer shack). Ok so when looping a filler pallet (filler pallets are pallets that just randomly appears they are most of the times pretty unsafe pallets and often only has a rock around it or osmething small)

I did a very sexy painting to showcase 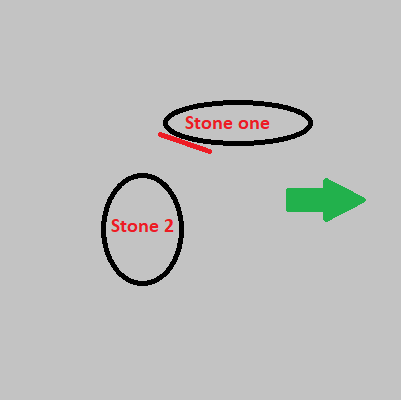 OK so lets say the killer is chasing you. And you want to go in the direction on the green arrow after looping this.

Why? So basically when you loop a killer you want to loop him around a pallet. On the drawing the red thing is the pallet. With a pallet you can stun the kilelr if you drop it on him and it will stun him for 2 seconds (without killer having perks) and after you stun him he will have to go around the pallet in this case go around one of the rocks or break the pallet which takes an extra 2.6 seconds. This means you will get around 5 seconds on you to find a new loop. This means that if you drop the pallet on the killer while he is on the left side fo the pallet and you on the right side he will be stunned. This is your chance run and find another pallet dont just look at him and wait for him to break the pallet! try to find a new pallet or window (you are most of the times faster than the killer while vaulting will explain vaulting on tip 7).

This is what a pallet stun looks like ( 7 seconds video) https://youtu.be/aMMTvBePbqY

For a mroe advanced guide on looping you can check out this video (19 min video however its really good) https://youtu.be/JtUa0F6FUss

Also when taking a hit from the killer you will get a speed bost USE IT! dont drop a pallet after you get this speed bost run away and get distance! dropping a pallet after getting hit will cause you to lose most of the boost and he will be able to down you faster.

Vaulting can be used to extend a chase you are faster than the killer on vaulting so getting a vault off will extend the chase duration. Btw medium and fast vaults will show the killer your location

There is 3 types of vaults possible

How do i choose which vault i want to do.

Slow vaulting is done by not pressing your sprint button

Medium vaulting can be done by pressing your sprint button

Fast vaulting is done by running for around 2 seconds before hittin the vault (cant be a steep angle) you should aim on hitting the window in the middle and coming right infront of the windows since a steep angle will make it a medium vault!. Things to keep in mind when vaulting while in a chase you can only vault a window 3 times after the third time it will be blocked for 30 seconds. When a window is blocked you will see black spikes on the bottom of it. The window is only blocked for the player that vaulted it 3 times and it is never blocked for the killer!.

Tip 8: learn the killers. If you learn the killers and what they do you will know what is possible and not against each killer. so for an example some killers are sneaky while some are really loud. When a killer uses their chainsaw it will down you it doesnt matter which state you are in this means that it will down you even if you have full health. So learning what every killer does will help you to counter them more

youtuber that could help you out!

I would recommend checking out

Fungoose a really good player with a ton of information https://www.youtube.com/channel/UCeVOtG0O6b88AedX3nOGAeA

He plays both killer and survivor and he is really good at it!

If you lose its not the end of the world if you lose a match take it as a chance to improve think about what you did wrong and the good things you did and try to repeat those!