We’re back with another Developer Update, a series of posts going over the biggest changes coming to Dead by Daylight. This time around, we’ll cover a long list of Killer, perk, and quality of life updates that’ll appear in the upcoming Player Test Build (PTB).

For some time, The Nightmare has stood out from the crowd with a particularly high kill rate, averaging roughly 3 kills per match. With that in mind, we’ve made some slight tweaks to bring him closer in line with the rest of the roster.

A handful of add-ons have also received changes. Add-ons which previously reduced action speeds now make various actions louder (repairing generators, grunts of pain, and footsteps). Black Box also has a brand-new effect: When an exit gate is opened, it is blocked for sleeping Survivors for the next 10 seconds.

Alarm clocks have also received some tweaks to make their effects clearer and more rewarding. Using an alarm clock will now make you fully immune to sleep— including sleep caused by a Killer hit — for 30 seconds. This effect is now shown on the HUD by turning your sleep timer yellow and having it tick down.

With these changes, we hope to promote more strategic use of his Dream Traps rather than placing them constantly during a chase, as well as encouraging Survivors to seek out and use alarm clocks. We’ll monitor his performance closely and adjust where necessary going forward.

Our focus for The Demogorgon is to give it more mobility with its portals. We’ve made the following changes to base portals:

On top of these changes, we have done a complete pass on The Demogorgon’s add-ons to make some of the lesser used ones more appealing. Here's a sneak peek at a couple of them: 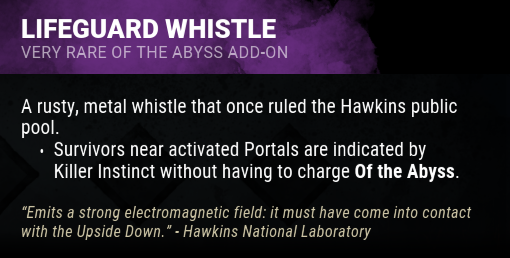 Don’t panic: We have not changed The Huntress’ base kit. We have, however, done a pass on her add-ons to bring them up to modern standards. Yes, this included the infamous Iridescent Head. 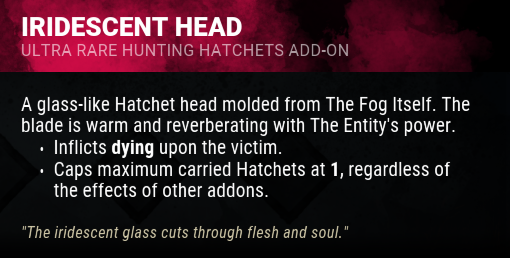 Last but not least, we have a small set of tweaks for The Twins.

It has come to our attention that some of you really hate small piles of bones. To aid you in your totem destroying mission, we’ve made some long-requested changes to Small Game:

These changes improve Small Game’s ability to track and cleanse totems while also removing the antiquated part that only applies to specific Killers with traps.

Lucky Break now hides scratch marks in addition to blood pools to help you lose the Killer. To compensate, the total duration of has been reduced to 70/80/90 seconds.

A small change here: Soul Guard now has a cooldown of 30 seconds after activating.

Realistically, this won’t affect the vast majority of cases. This change is purely to prevent stacking healing speeds and Soul Guard from getting out of hand.

Take two for Open Handed: We’ve slotted this update back in for the upcoming PTB.

Open Handed now has an increased effect (8/12/16 meters), but no longer stacks with itself. This makes the perk more appealing on its own without needing to stack it with other Survivors in the match.

A very straightforward change: Zanshin Tactics is now permanently active and also has a larger range.

To remove some confusing intricacies with how Borrowed Time interacts with some Killers and the Oblivious status effect, we have removed the terror radius condition from the perk. To compensate, we have reduced the duration of the Endurance effect to 8/10/12 seconds.

This new version has a few benefits:

With these changes, we hope to make Object of Obsession a more fun and interactive perk for both sides.

The chance to receive a skill check while using a toolbox has been increased. This change makes toolboxes feel more interactive while they’re in use and is totally not because the lead designer had a skill check challenge and got unlucky three matches in a row.

Another small tweak: We have decreased the time the hatch remains open after a key is used from 30 seconds to 10 seconds. Like before, if the hatch closes naturally (is not kicked shut), the End Game Collapse will not start.

Please note that this is not the final change keys will be receiving. We’ll share more info on the future of keys as soon as we can.

For the 4.7.0 PTB, we have made some more changes to the HUD; this time focusing on the visibility of Killer powers on the Survivor portraits. In this update, we have made improvements to:

Additionally, we’ve also adjusted the Survivor portraits so they no longer obstruct the bottom of power indicators.

In an ongoing effort to improve accessibility, we have changed the way struggling works starting in the PTB. Rather than needing to mash a button, Survivors in their second hook stage will now receive occasional skill checks. The success zones are fairly large as we’re not looking to make struggling more difficult/deadly at this time.

Our goal with this change is to make struggling more accessible to players with repetitive strain injuries while keeping struggling as an interactive mechanic. 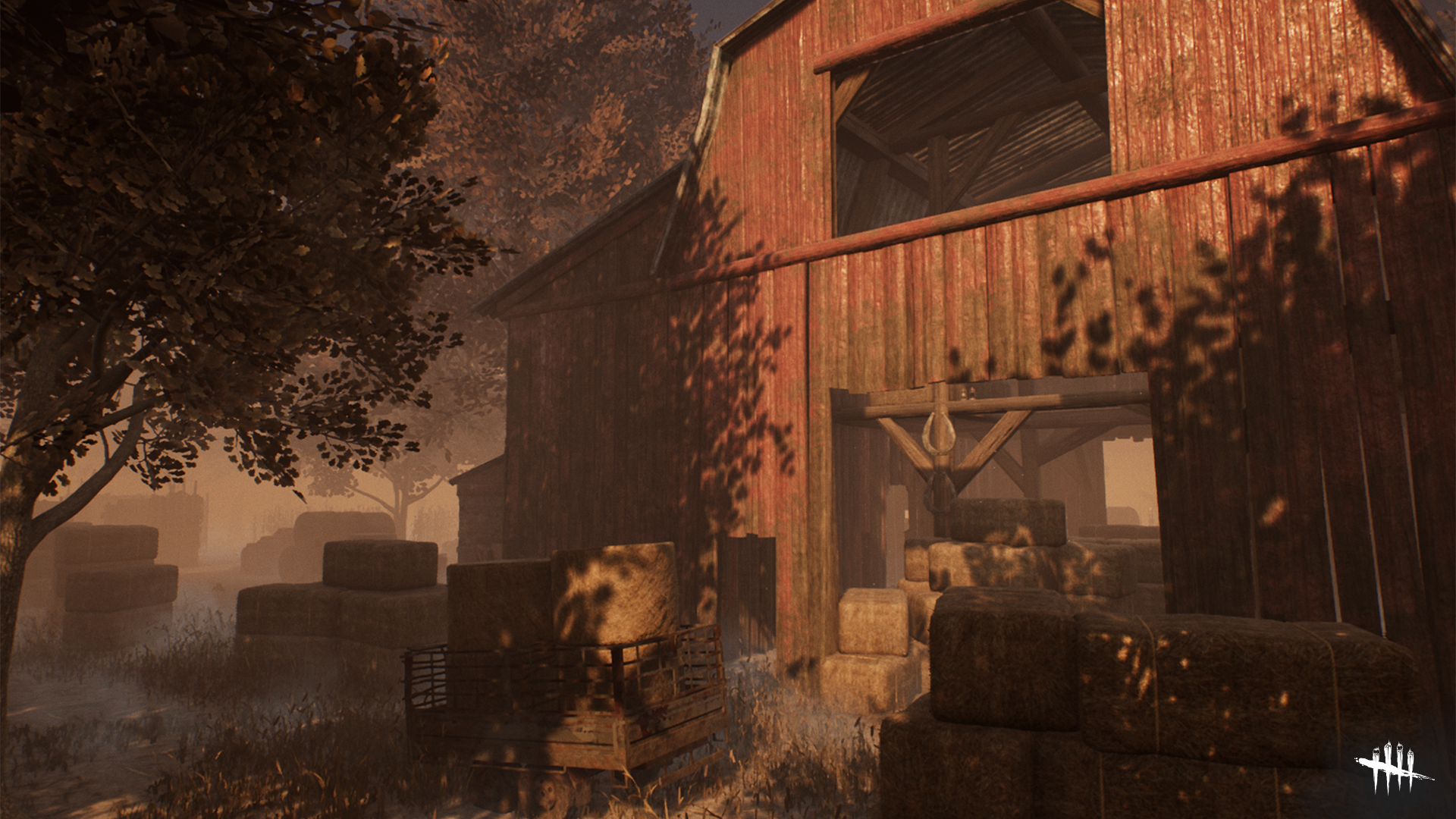 I was going to put a funny intro here, but it was too corny.

In case you missed it, the next realm slated for a graphical update is the Coldwind Farm! Check out some screenshots from the upcoming rework. 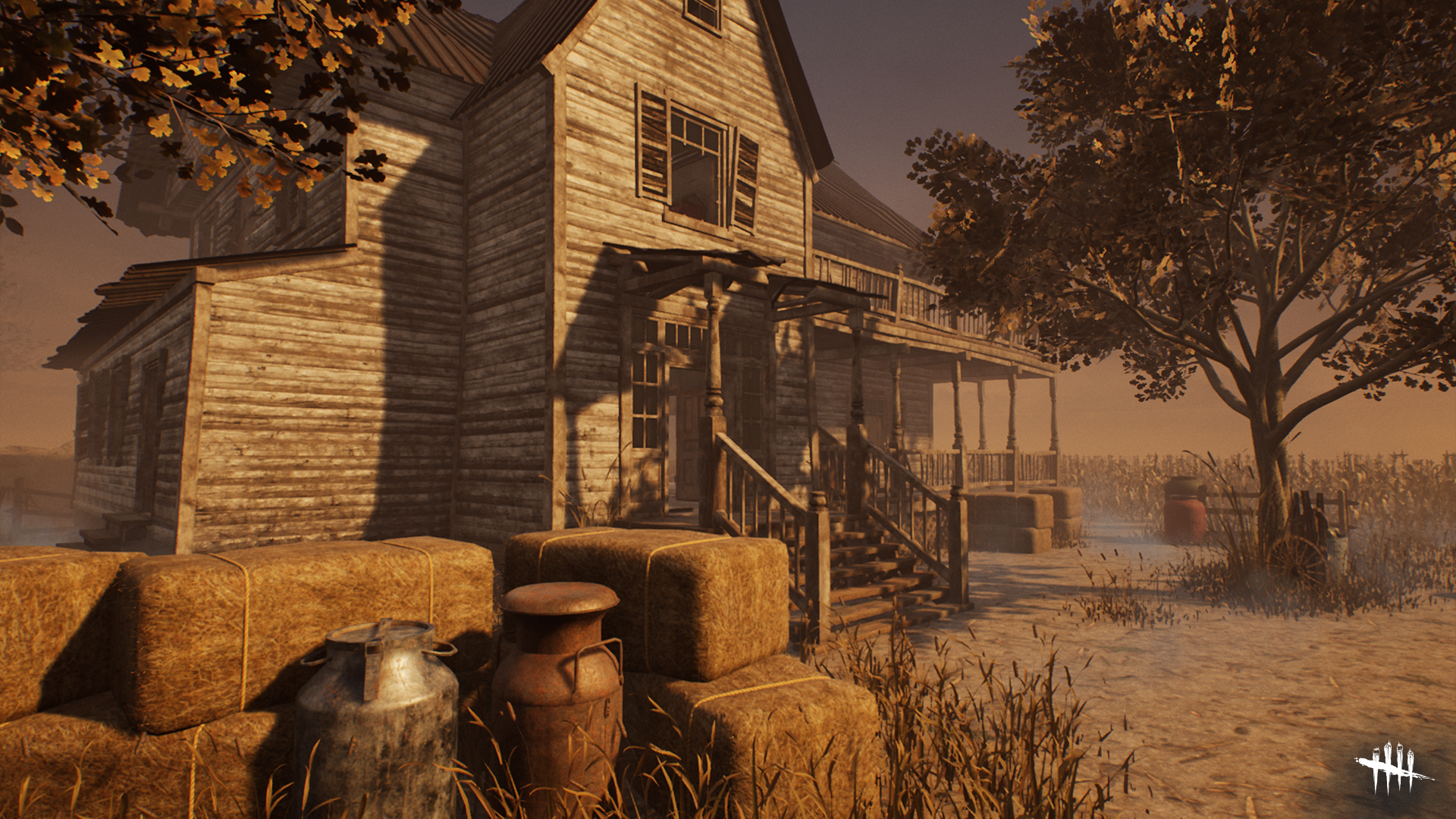 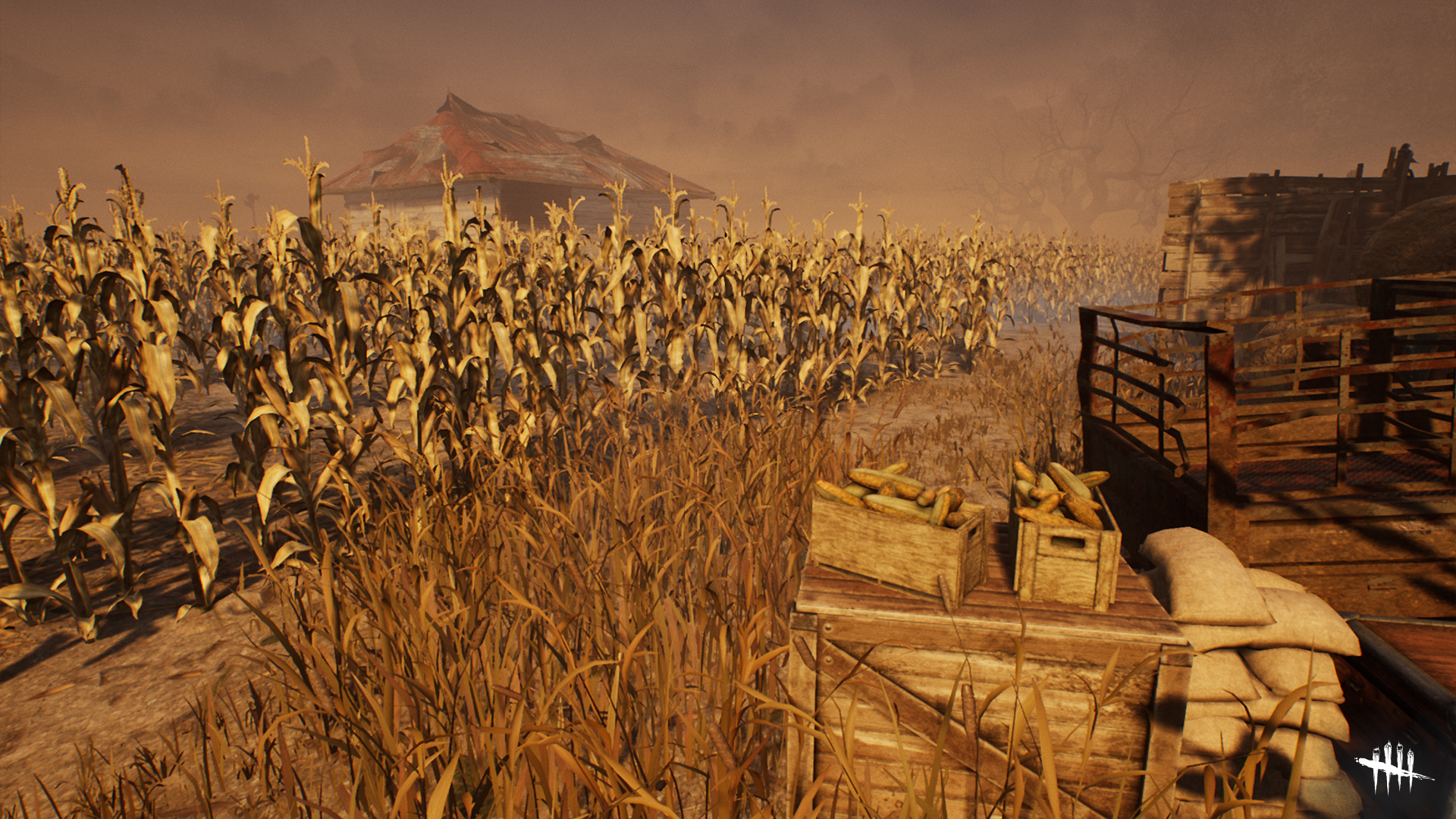 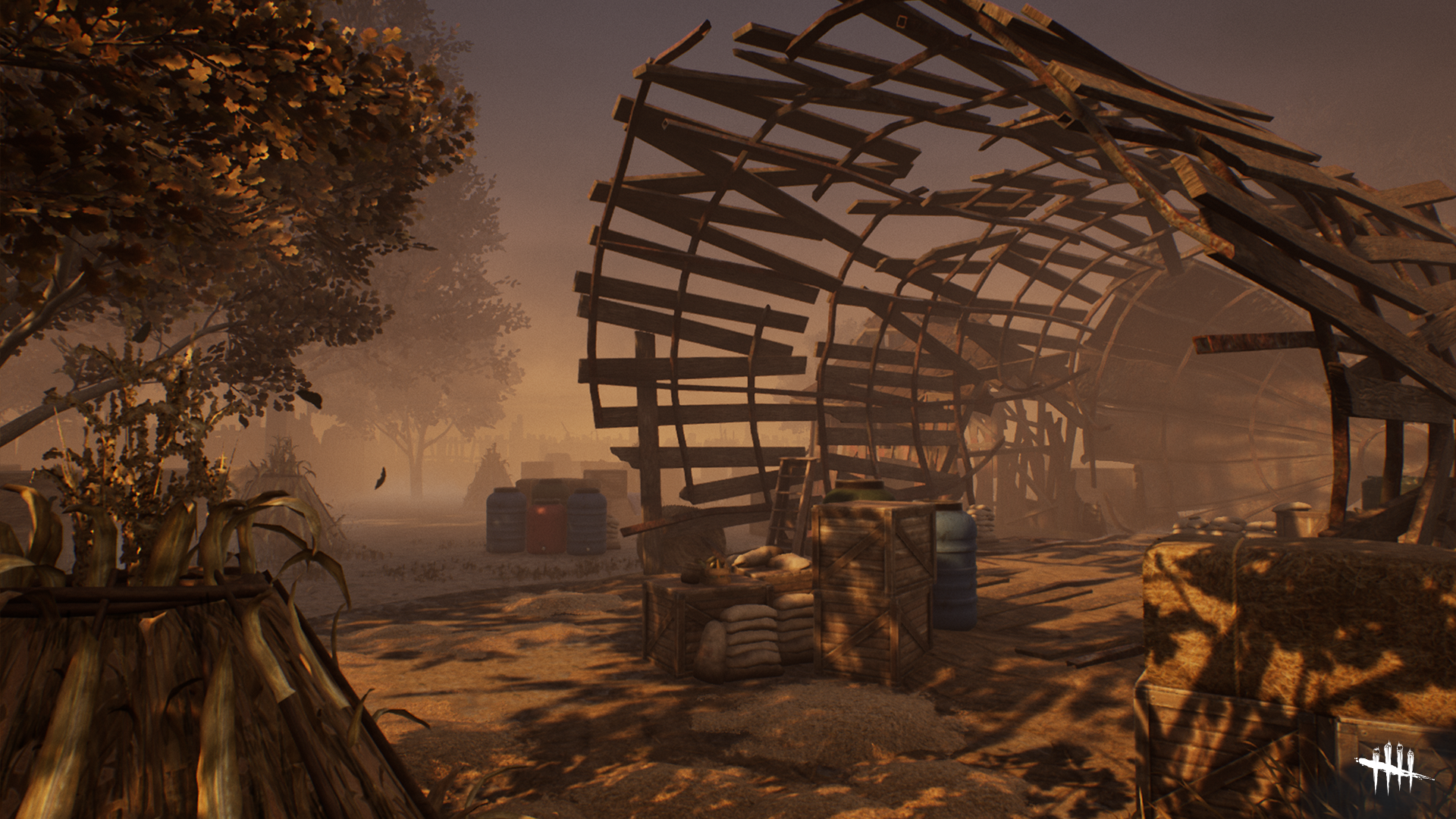 On that note, we’ve reached the end of this Developer Update. All of the changes mentioned above will be available for testing in this week’s Player Test Build, starting April 13th. We look forward to reading your feedback once you’ve had a chance to try them out!