I rarely use the forums so I'm only making this post as feedback for hopefully the devs to see. I've been maining Huntress for about a year and a half and have a pretty large amount of hours sinked into her, and since Huntress got an addon pass I'd like to give my thoughts on it.

First off - the good. The new Coldwind is FANTASTIC. The collision boxes are spot on. Torment Creek is my new favorite Huntress map. It should be a standard in all maps, as a lot of maps have weird and janky collision boxes that will eat hatchets. There's so many cool throws you can do, you can even throw UNDER the window on the tractor with enough precision, albeit it's pretty tough to do.

Now for what I don't like. The addons are painstakingly BORING. Especially the Ultra Rares. You guys played it too safe, even though many prominent Huntress players gave fantastic suggestions for the Ultra Rares. Like what if we went with Scott's idea for Iridescent Head and made hatchets insta-down only from over 24 meters? Or what if you guys did something cool like hitting hatchets from over 24 meters gives you one hatchet back in return with a cost to reload time?

Below me is a Huntress add-on pass I wrote a few months back. Looking back, I'd probably change a few of these- but the ideas are solid. They are SO much more interesting than what we were given. 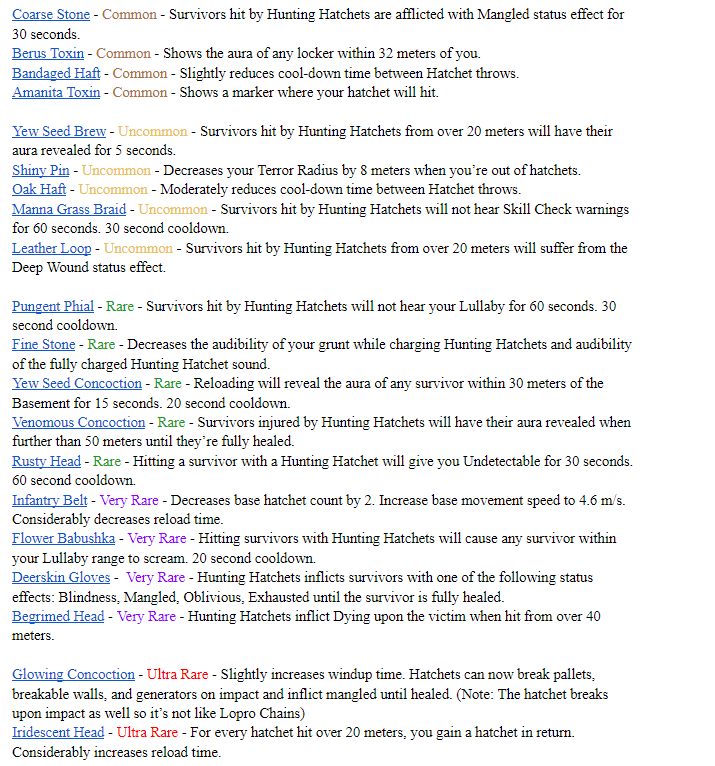 Flight time addons, though, I'll give you credit for. Those are interesting and I will have a lot of fun with them. For the rest, though, they're just boring and/or ineffective.