This past July, we released quite possibly our largest balance update yet when we changed 40 perks including the existing meta. At the same time, we briefly introduced and later re-debuted Matchmaking Incentives, which reward players for switching to whichever role is needed at the time.

With so many changes at once, the dust still has not quite settled, but we’re starting to get a picture of how the game will look moving forward. It’s been a little over a month since the update went live, so we want to shed some light on the impact that the 6.1.0 Update had on the game.

Before we dive in, we want to remind you that these numbers are still changing each day. The numbers we share in this post will likely be obsolete within a few months. This also means that any recent changes may not be reflected in these stats. 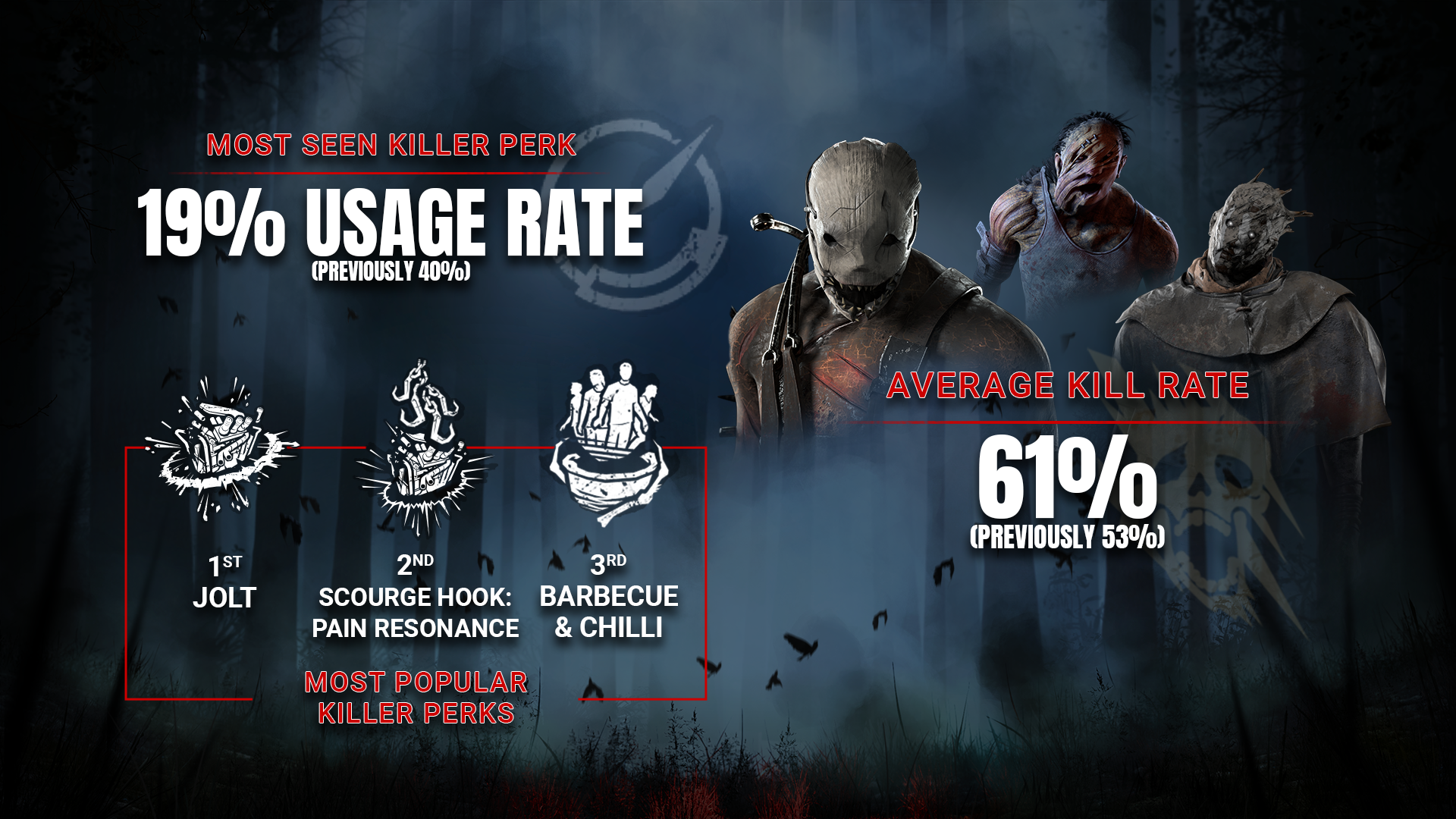 In Dead by Daylight, the Killer should strike fear into the Survivors. Part of this comes from being a big, scary looking person or monster, while another part of this comes from their ability to kill you. Before the 6.1.0 Update, we found Killers to be a little lacking. As a result, we introduced several changes to improve Killer quality of life & make them more deadly. Beyond that, we made significant changes to many of the most & least used Killer perks.

The result of these changes: The average kill rate (percentage of all Survivors killed) rose by about 8%. This leaves Killers- on average- within a range that we’re comfortable with, making them deadly, but not oppressive.

More significantly, the variety of perks being used saw huge improvements. The previously most used perk, Barbecue & Chilli, went from being used in 40% of all Killer loadouts to only 17%. Jolt, meanwhile, climbed from 13% usage to 19%. Scourge Hook: Pain Resonance dropped slightly, going from 20% usage to 17%, just barely beating Barbecue and Chilli for the number 2 spot.

Other top 10 most used Killer perks include: Sloppy Butcher, Save the Best for Last, Overcharge, Thanatophobia, Call of Brine, Hex: No One Escapes Death, and Corrupt Intervention.

Overall, the disparity between the highest and lowest usage rates is significantly smaller than before. We intend to continue monitoring and fine-tuning perks as needed going forward, but already we’re seeing far more variety than in the old meta. 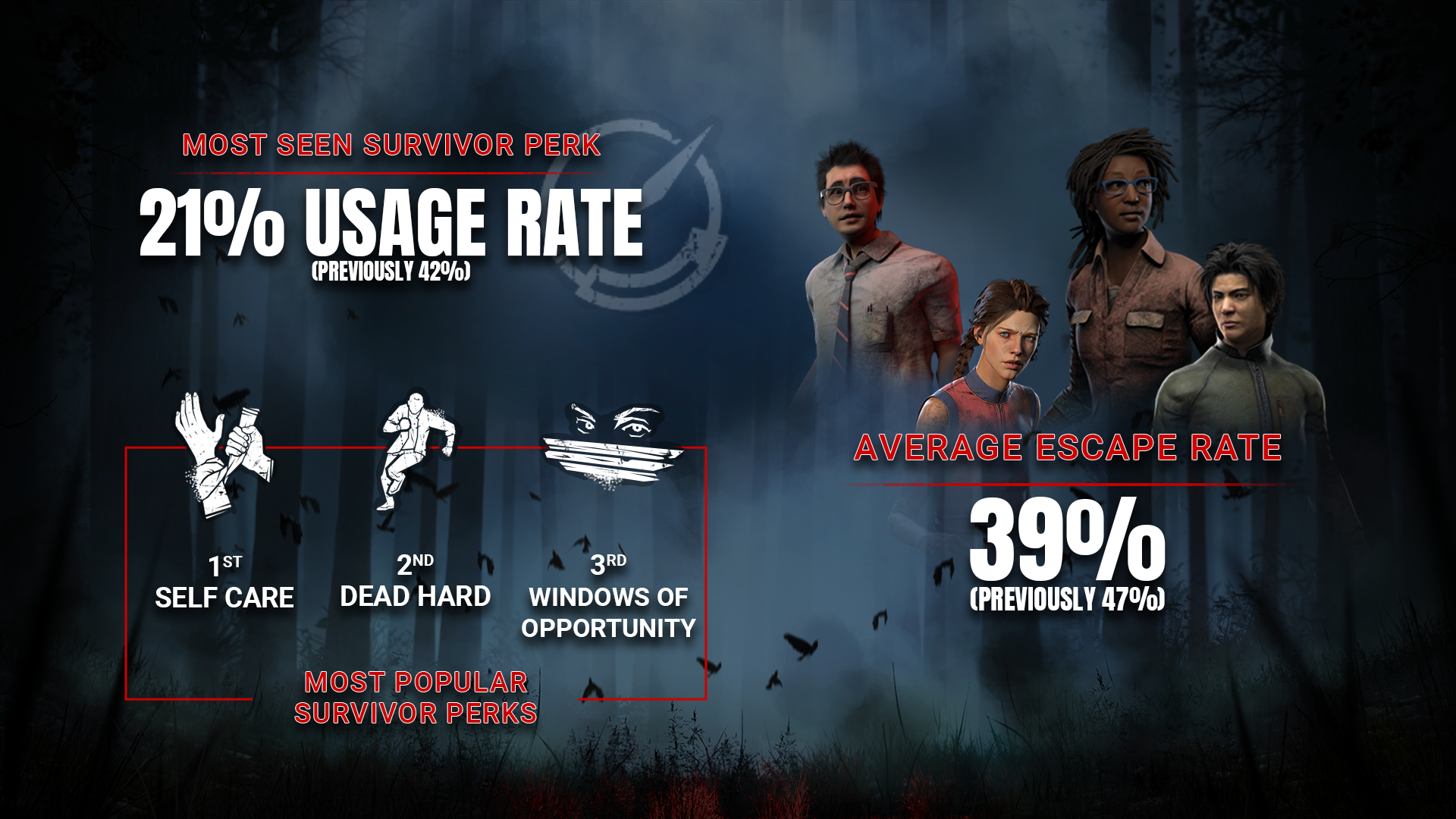 Survivors saw similar results following the 6.1.0 Update. The previously most used perk, Dead Hard, fell from 42% usage to 19%, making it the second most used perk. Meanwhile, Self-Care remained a popular choice in some regions but not others, securing it the first-place spot at 21% usage. A new contender entered the fray with Windows of Opportunity shooting up to 18% usage.

Much like Killers, the gap between the most and least used perks is much smaller than before, leading to a wider variety of perks used each match. 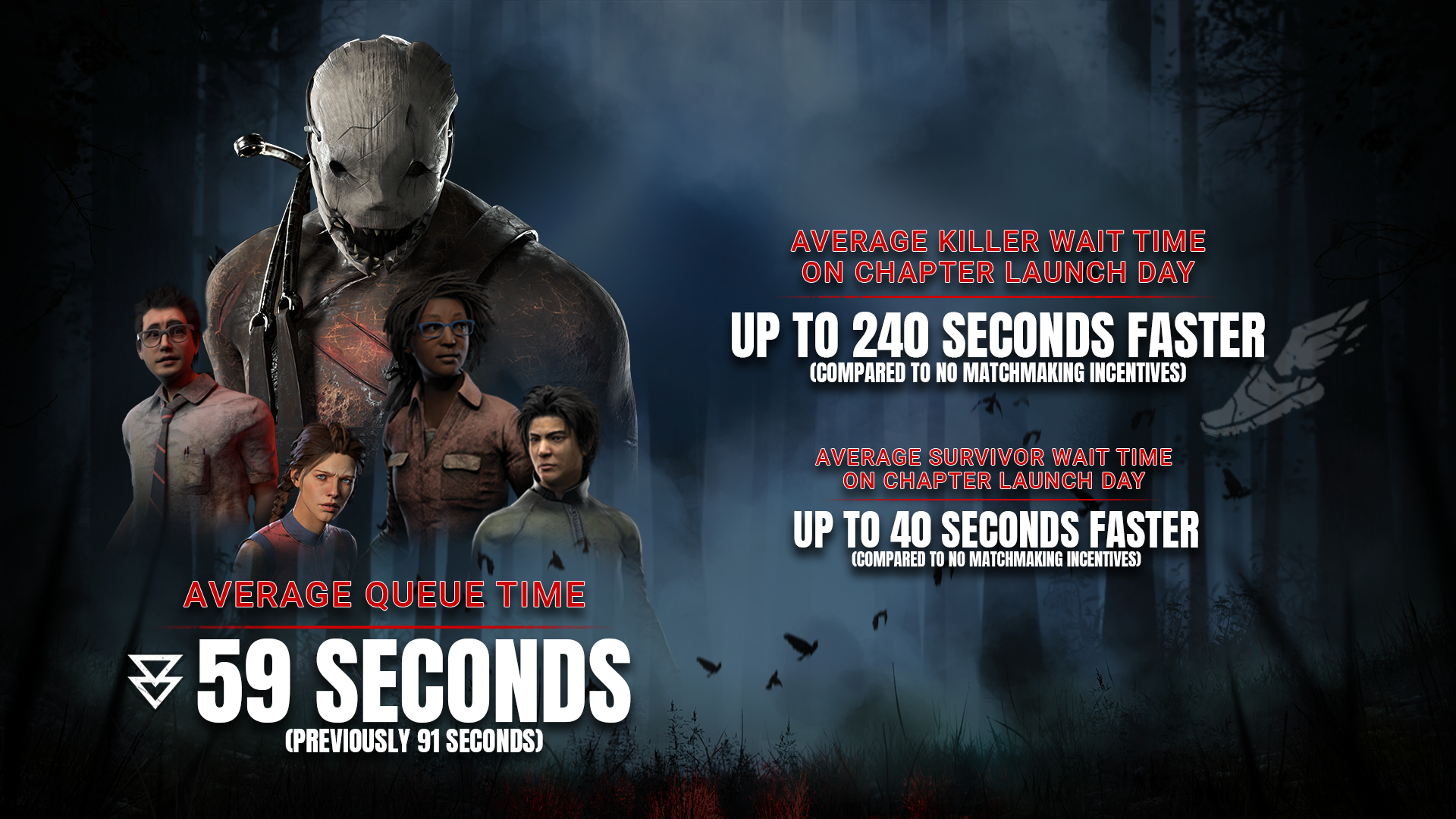 All these changes have also impacted queue times. The distribution of players playing each role seems to be a lot healthier than before, causing the average queue time to drop to 59 seconds from 91 seconds.

Unfortunately, we don’t have a ton of data on Matchmaking Incentives just yet since they only returned alongside the Resident Evil: PROJECT W Chapter. However, we have some data to share on how impactful they can be.

When a new Chapter launches, we typically see more people trying to play the new Killer than the new Survivor(s). Naturally, this causes Killer queue times to skyrocket as there simply is not enough Survivors to go around. This most recent Chapter was no exception.

Once Matchmaking Incentives were activated, queue times dropped significantly. In the most extreme cases, the time taken to find a match decreased by up to 4 minutes for Killers and up to 40 seconds for Survivors.

We’ll be watching closely over the coming weeks to see how Matchmaking Incentives affect matchmaking, but early signs suggest that they are very effective when they are needed most.

We hope you enjoyed this peek behind the scenes as we reflect on our first meta shakeup. As a reminder, the numbers you see here are still changing every day. We’ll keep monitoring and fine tuning over the next few months as everything settles.