This is a concept I truly want to happen for a anime license chapter dlc. 2 Survivors and 1 Killer. 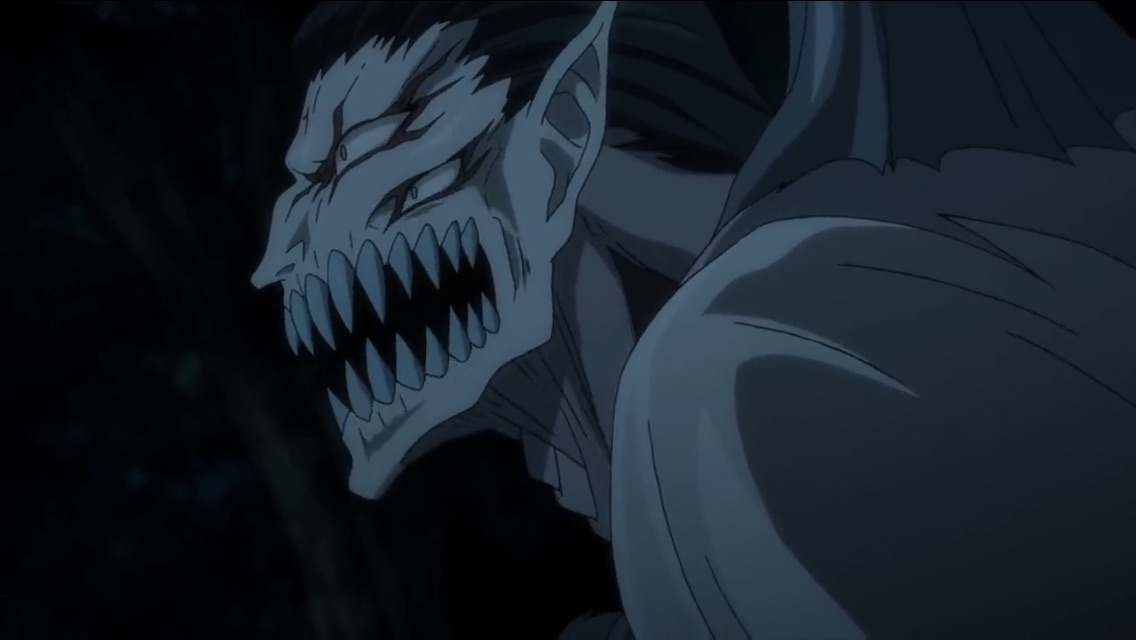 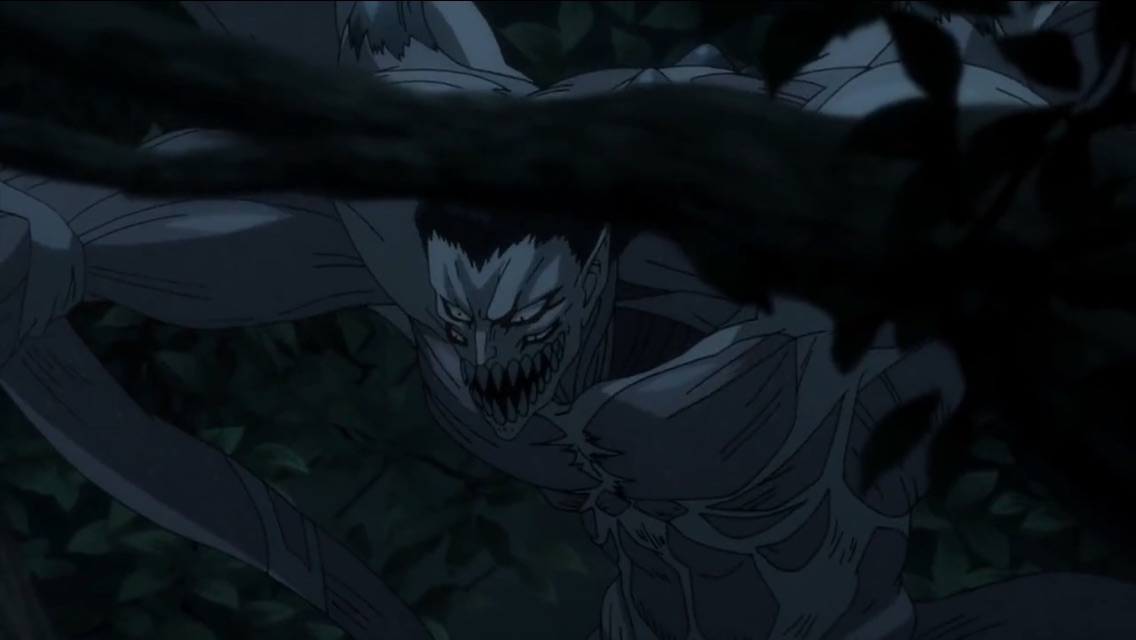 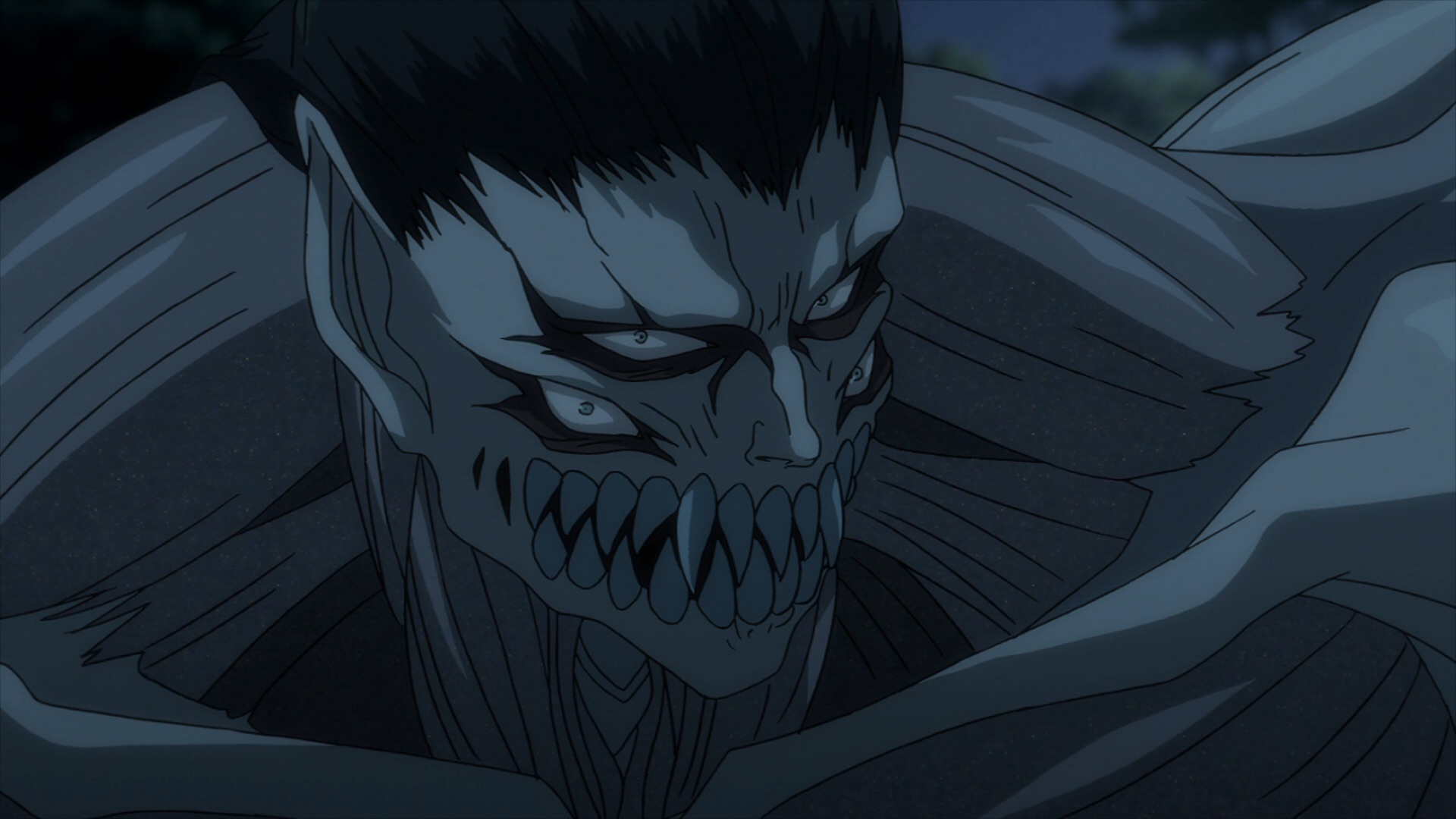 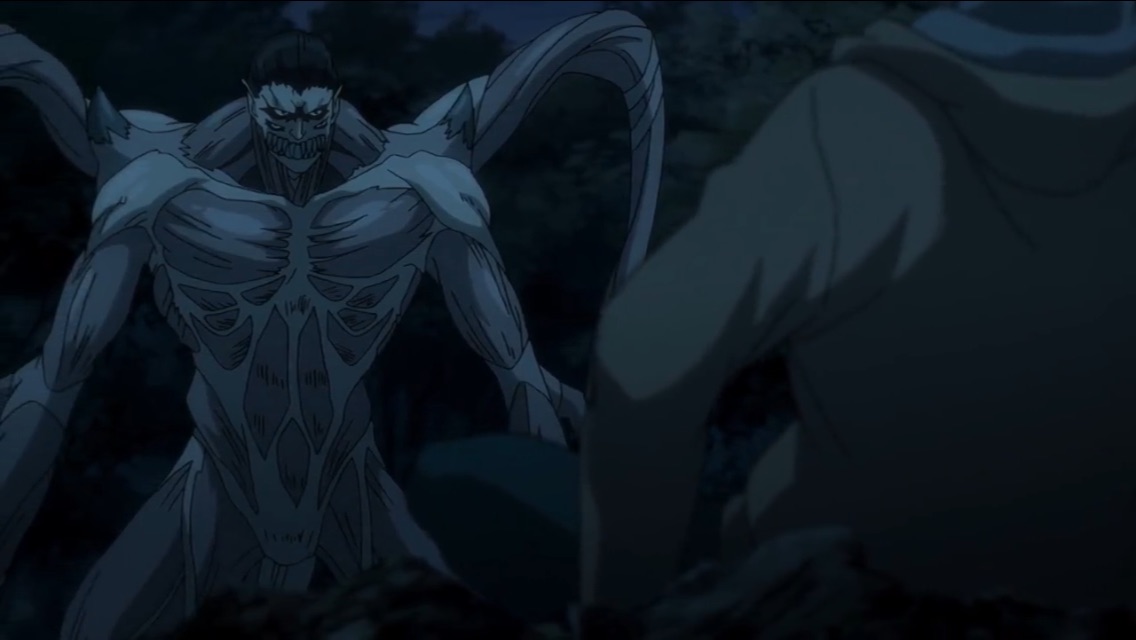 Chase Theme: https://youtu.be/vIgCDWD_OgQ (if we have a Parasyte chapter I don’t think this song will play it would be something dbd will make but I can imagine what the chase theme will be.)

The Abomination Killer, able to build up stronger as he attacks his prey with his scythe like weapons. When Special ability is ready The Parasite will be able to locate survivors in a huge range and bring a intense attack with his appendages.

His personal perks, Savage Force, Parasitic Fear, and Hex: Murderous Intent allow him to break things faster, see other survivors aura in your distant terror radius in a chase and a hex that causes survivors to not hear the killers terror radius when cleansed.

Gotou is a abomination parasite composing of 5 other parasites. Gotou believe that humans are inferior species and shows no remorse as he kills and dismembered. Gotou thinks that his existence is to fight and survive, kill after kill after kill Gotou has become more dangerous as each kill he has done, becoming the abomination he truly is craving for bloodshed and war just to fight. After he was defeated by Shinichi Izumi, a black fog covers Gotou’s corpse reviving the blood seeking monster and take him to a realm full of weak humans for him to butcher. A good perfect world for Gotou as he can do what ever he pleases with such ghastly murders for the awaken carnage.

Craving for bloodshed and to be the superior race, Gotou will rip his prey into shreds.

Passively charges at 1.5% per second for each survivor that is injured, hooked, dying, or suffering from a status effect. When Carnage Meter is full, press the Active Ability Button to unleash Carnage Mode.

Press and hold the Power button to charge an attack. Press Attack button to use it. This one is a big sweep that can hit multiple Survivors. Attack Inflicts Hemorrhage and speeds up the Carnage Meter by 13.5%.

Power Button + Active Ability button prepares Parasite Skewer and locks you into only Parasite Skewer until it is unleashed. Two attack Type Stab that functions similarly to a basic attack but can be done in quick succession. If the first hits the second attack cannot be used. Inflicts Mangled on hit, and speeds up the Carnage Meter by 23.2%.

When the Carnage Meter is full, press and hold the Active Ability button to unleash Parasitic Carnage. Reduces at rate of 0.5% per second. Basic attacks will now have a increase lunge and will have access to additional abilities: Roar and Genocide Barrage.

Press the Active Ability button while Parasitic Carnage is active, Survivors within 56 meters scream and then suffer from Oblivious for 30 seconds. Using this reduces the Carnage Meter by 9.5%

Power Button prepares large Barrage of Attacks released with attack button. Attacks as many times as you press the Attack button while holding the Power button. Each Attack reduces the Carnage Meter by 1%. Survivors hit by any attack are put into the Dying State.

Brutality has been your best suited method to hunt.

When a survivor stuns you with a pallet, the next time you destroy generators, breakable walls, and pallets, your damage speed increases by 25/30/35% faster.

“Your gonna shriek in Agony!” — Gotou

Your presence horrifies anything that comes across you and spreads it to others.

When in a chase, if another survivor is close to your distant terror radius of 4/10/16 meters you see other survivors aura. The aura lingers for 5 seconds when chase ends. This perk as a 75/60/45 second cooldown.

“Are you telling me that freak look human to you?!” — Uragami

A hex that sends paranoia and makes someone suffer tremendous consequences.

When the hex is destroyed or blessed all survivors scream revealing their location and suffer Oblivious for 30/45/60 seconds. The survivor that breaks or bless the hex will suffer Broken status for 30 seconds, Mangled and Exhausted for 35/40/45 seconds.

“Now I can do whatever i wish.” Gotou when the game starts

“Silly boy. The last time we met you skidded away like a little cockroach.” Gotou grabbing Shinichi from a locker.

“I cannot abide being injured by a lowly scrounging unworthy species!” Gotou when hit by a pallet.

”RAAAAUUUUUUGH!” Gotou when Hit by a pallet 2

“Your gonna shriek in agony!” Gotou when hit by pallet 3

“Some lonely little human is daring to challenge me?” Gotou when he starts to chase a survivor

“I always welcome a battle, even if there’s to be only one opponent.” Gotou when injuring a survivor with his basic attack.

“You can do better then that, humans are supposed to be the most intelligent lifeforms on the planet isn’t that right?” Gotou when carrying a survivor.

”What can a helpless little creature like you hope to do?” Gotou when hooking a survivor.

”How disappointing, I wouldn’t even call this a fight.” Gotou when downing a survivor.

”It’s time for you to become one with the refuge that surrounds you.” Gotou when using a mori

“The reason for my existence is to fight.” Gotou when using his ability. 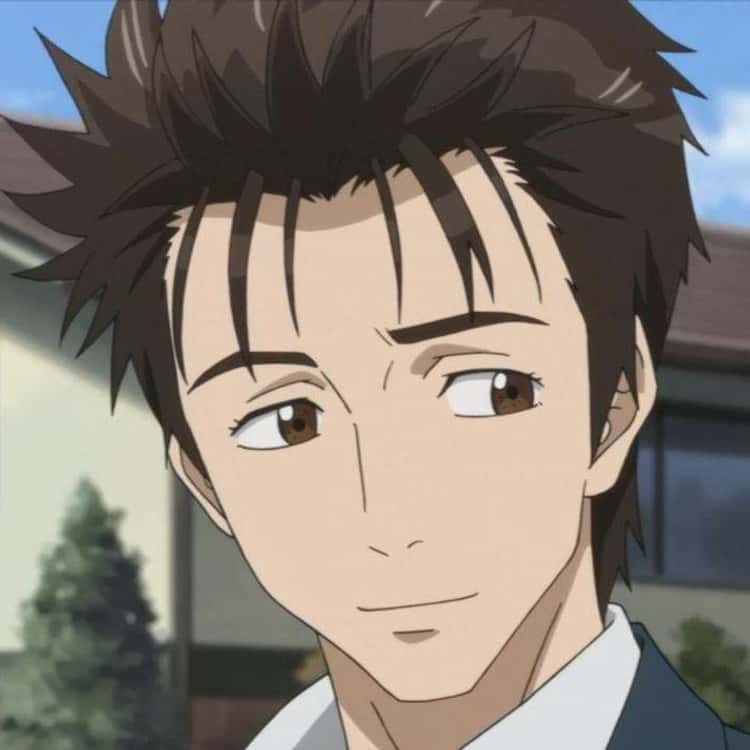 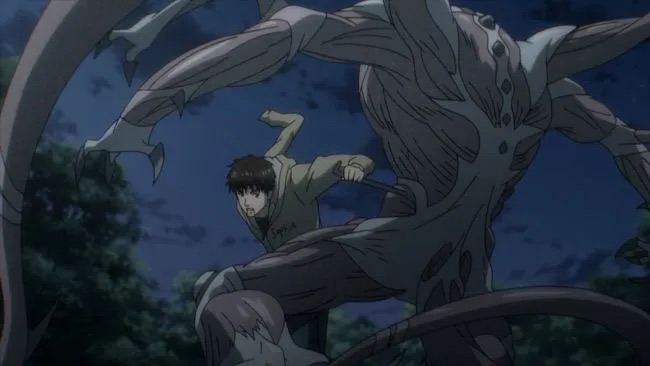 Shinichi Izumi is boy with a parasite named Migi, and will fight the killer to protect other survivors.

His personal perks, Valorous, Excruciating Save, and Greater Adversary allow him to stun the killer longer, take a hit to help survivors get away a chase, and become a great enemy to the killer.

Shinichi Izumi is a former high school student of West High with a parasite in his right arm named Migi. Shinichi tries to resume his life, well you can say normal to shinichi with a parasite living in shinichi who sleeps a lot.

Shinichi has been having ominous nightmares, a girl dead on the ground surrounded by black fog next to a hulking massive figure. That body was Kana, for months Shinichi has blamed himself for not being there for Kana, just remembering it makes a hole in heart. Migi has tried to reassure Shinichi that it’s not his fault but Shinichi disagrees. A black fog has surround them both, the same one in Shinichi’s nightmares. Shinichi covered his eyes as the fog consumes him.

Shinichi uncovers his eyes to see a familiar area. Shinichi asked Migi if he has any idea how they got here even Migi is utterly stunned. Shinichi hears a familiar voice coming close to him, he was embraced by Kana Kimishima, Shinichi is in complete shock to see her. No, Shinichi is actually happy to see her as well. Before Migi had the chance to say something a loud stomp was there in front of them. Shinichi recognized that monster in his nightmares. The abomination parasite Gotou is back and is prepared to finish what he had started. Shinichi has Kana with him and is completely unsure what’s going on for this isn’t a dream, but one thing for sure is this, Shinichi is not afraid of Gotou for he will now face his adversary once again.

You have great courage in the face of battle and willing to protect others.

At the start of the match you start off with 1/2/3 tokens. When you get a great skill checks on generators you gain a token up to the maximum of 5 tokens. Hitting the killer with a pallet increases stun duration for 1/1.5/2 seconds for each token. Hitting the killer consumes all tokens.

You allow yourself to take the pain to have others get away.

You let your allies around the campfire of your past experience of your mortal enemy.

When you are in a chase by the killer survivors will see your aura for 4/7/10 seconds.

When ever you escape the killers chase or sabotage hooks you gain a token up too the maximum of 3/5/7 tokens. If you are the obsession you gain 2 tokens. When you are unhooked by a survivor you consume all tokens and see the killers aura for 1/1.5/2 seconds per token.

Majorly increases your chance of being the obsession.

“Now I can at least see you for the disgusting monster that you really are!” — Shinichi 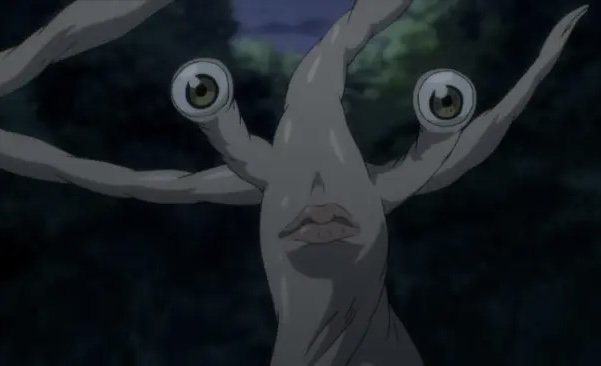 When you use the perk saboteur, Migi will cut the hook instead of using your hands. 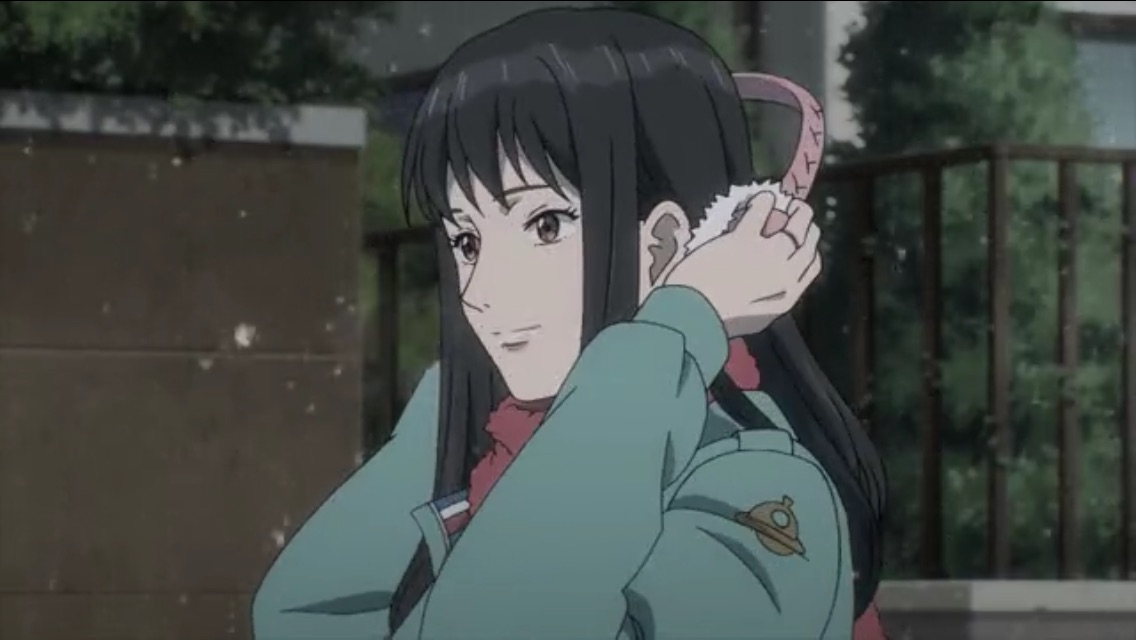 Kana Kimishima is a gifted girl who can send signals to other survivors and sense them.

Her personal perks, Soul Sense, Boom: Pathfinding Control, and Safeguard allow her to sense the obsession as well as work together with obsession, sense the killer, slow the killer when stunned.

Kana Kimishima is born with a gift that can sense things, more precisely parasites and it ended up her own end, dead on her crush Shinichi Izumi’s arms. However, death didn’t hold her long. Kana wakes up in a dark fog in what it looks to be a forest, her thought it was a dream but the pain she had from the parasite attack was more real.

Kana then sensed something wicked chasing after someone in danger. Kama thought that she can only sensed Shinichi and now after she encountered a parasite, she thought she can sense them but now she sensed something else. She channels her mind to see what is happening, the survivor has gotten away safe as sound for now. Kana felt like she should practice her senses so she wouldn’t make the same mistake and help someone in need after what she has witnessed.

Time was almost irreverent here, days months, who knows how long Kana had been in here. She has practiced her sensing ability on anything living mainly survivors and killers. One day Kama has sensed a familiar feeling. Kana sprints in a hurry with a smile on her face, he’s here. Her knight and Shinning armor is here, her soul mate, Shinichi Izumi.

You send signals to the person closes to your heart.

You can see obsession’s aura and when interacting on a Generator or Healing a survivor with the obsession, progression increases 15/20/25% for you and the obsession.

Decreases your chances of being the Obsession.

”Shinichi, I told you I am able to sense you and only you.” — Kana

When you sense you are endanger you reassure others and yourself that nothing is close.

Press and hold the Ability button near a Dull or Hex Totem to bless it and create a Boon Totem. Soft chimes ring out in a 24 meter range.

You can only bless one Totem at a time. All equipped boon perks are active on your Boon Totem.

You show others that the enemy can be slow down. 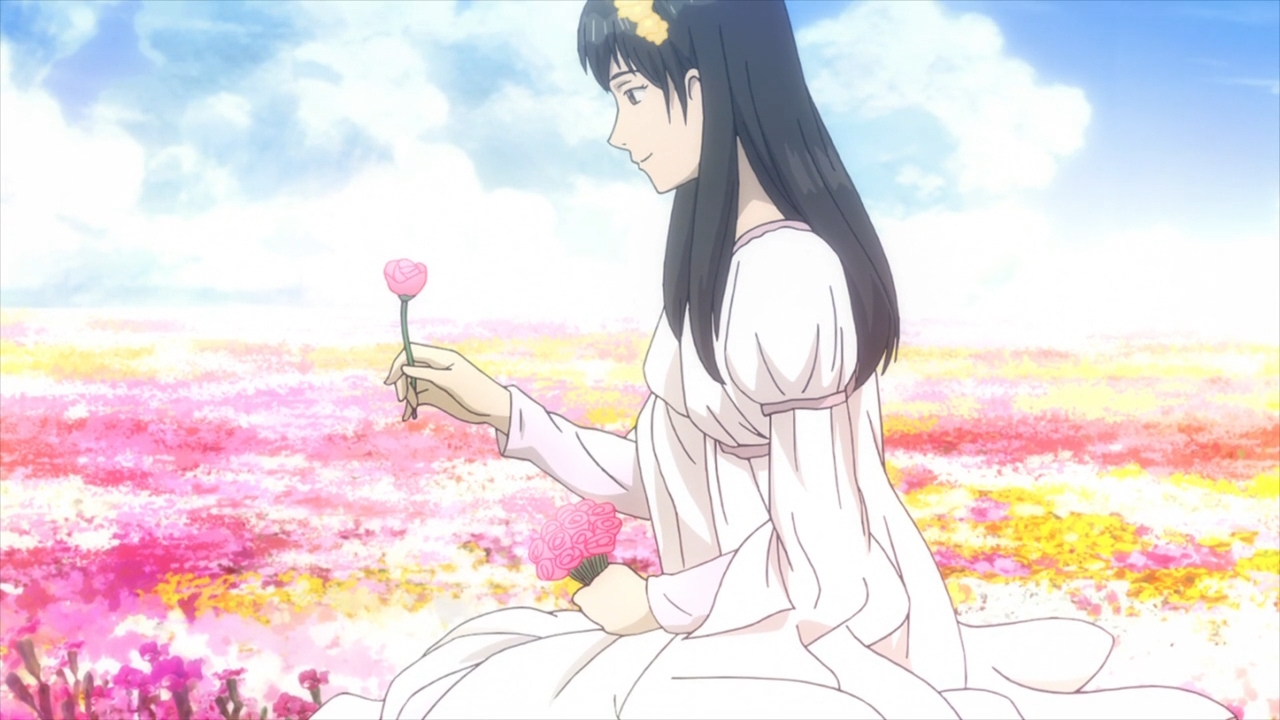 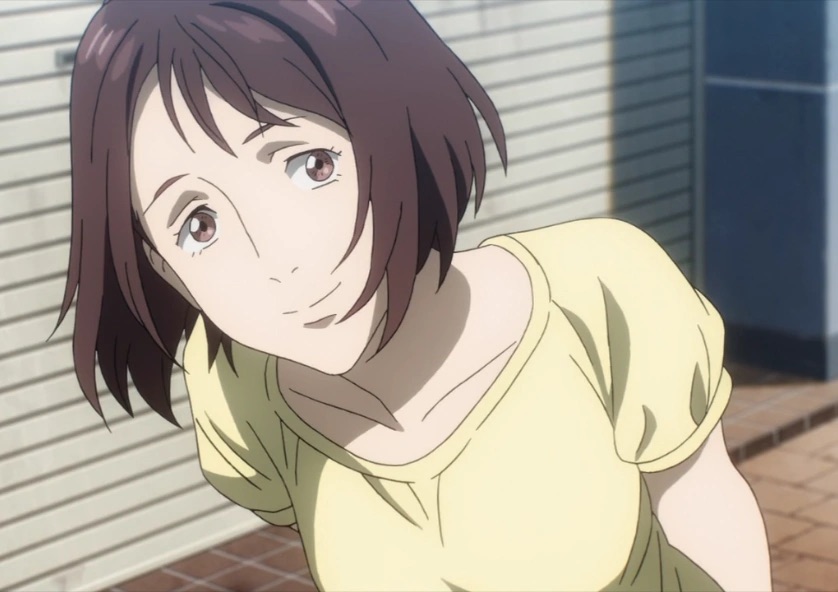 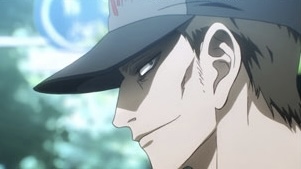 I don’t know what quotes survivor’s and Uragami would use but I bet the devs would figure that one if they do this.