For the character on the front of the box Trapper is very unimpressive as a Killer. The Trapper rework we got way back was nice but while it singlehandedly pushed Hag into A tier Trapper is still in low B tier or possibly even C tier. This is because his rework did nothing to actually address his issues and simply put bandaid fixes onto things Trapper mains complained about.

As a semi-avid Trapper player here's the things that really bug me about the Killer:
1. Time management - While Hag's traps take a fraction of a second to place Trapper's traps still take quite awhile to set up. This is compounded by the gimmicky placement (discussed later) and time it takes to get traps to place.
There's absolutely zero reason for Traps to spawn around the map. No other Killer has to go "pick up" their power like Trapper. Yes Doctor has to spend time increasing Survivors' Madness and yes Michael needs to stalk to gain Evil Within but these are both things you do at the start of the game. Trapper consistently has to spend minutes on end walking across the map to pick up traps and place them down, making it hard to play him with Ruin and near impossible to play him without it.
2. Finnicky Hitboxes - Bear traps in this game have really awful hitboxes. They're needlessly precise and can often be avoided due to reasons one couldn't possibly forsee without several hundred hours as the Killer learning the ins-and-outs of his needlessly specific mechanics. This is further compounded by the needless hitbox restriction of the bear traps and where you can place it in relation to the environment.
In one game I placed a trap a little too close to the shack window and when I chased a Survivor to the shack window they managed to vault over the trap I placed twice! It was only when they doubled back to the window from outside the shack (as opposed to jumping through it from the inside) that they were actually trapped. 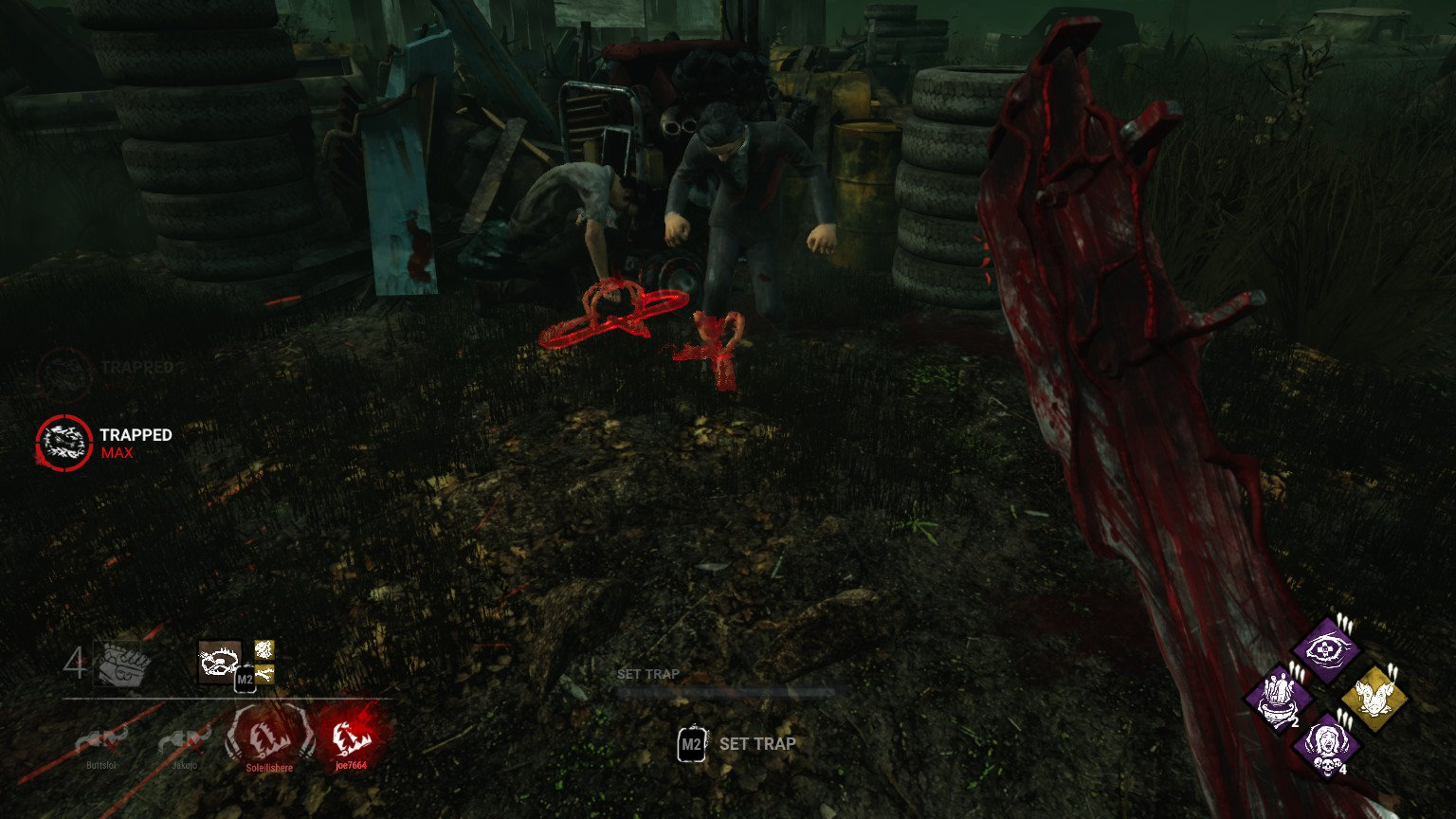 This screenshot (taken in a game where I farmed with the Survivors because two people DCed very early into the game) I literally placed both my traps right beside the generator and the Survivors were able to walk around them. It was only when they stopped working on the generator that they were both trapped.
3. Addons - Bear Traps in this game have a serious problem. Both Pig's Reverse Bear Traps and Trapper's regular Bear Traps suffer from some extremely worthless addons. While I won't talk about Pig's addons like Razor Wire, Utility Blade, and Face Mask here I will talk about Trapper's addons.
Let's start with the obvious: All coil addons are practically useless. Slowing down Survivors by half a second isn't useful if it takes you several seconds to slow them down. There's no reason to take a Coil over a more useful addon.
The various dye kits vary in utility based on the map but are generally kinda bad.
The two different "Jaws" addons (Serrated Jaws / Rusted Jaws) are awful, partially because Sloppy Butcher was buffed (and injuring a Survivor with your trap will cause Sloppy Butcher anyways) and partially because when a Survivor is trapped it will almost always lead to a hook. Serrated Jaws are completely worthless for this exact reason because you will rarely need to track a Survivor after they're trapped. Rusted Jaws can be mildly useful to slow the game down but you need only look at my point about the Coils to see why that isn't that impressive.
Honing Stone is crap without Deerstalker. If Survivors who were saved from the trap were put into Dying state it would maybe be useful but as it stands this addon is bad outside of a Slugging build and there's no reason to run a slugging build as Trapper.
The only regular addons that are worth taking on Trapper are the setting time addons and the bag addons. This is because these two addons cut down on the time it takes for Trapper to set up which is his single biggest weakness. Wax Brick can also help since it really gives you more leeway to get to a trapped Survivor but setting time and easier transportation are still the best regular addons. I say "regular" because there are also his Ultra Rares.
Bloody Coil is... meh? As soon as Survivors realize that you have this perk they will stop disarming traps and just ignore them instead. It can be good on some VERY specific maps with VERY specific choke points (example: the Bathroom on The Game can be "locked" with a trap that has to be disarmed if Survivors want to enter / leave that room) but is often a waste of an item slot since, again: Survivors will simply ignore traps instead of disarm them if you have BC.
Iridescent Stone... this addon singlehandedly turns a C tier Killer into a high B tier Killer. Being able to fire-and-forget your traps in common loop locations and not worry about them being disarmed is an absolute goddamn godsend.
4. Trap Limit - There can be 6 traps on the map at a time. On all maps unless you bring bag addons. This means that an absolutely gigantic map like Red Forest (12032 meters squared) has the same number of traps as a microscopic map like Treatment Theatre (7424 meters squared.) And if you've ever played Trapper on Treatment Theater you know that 6 traps is absolutely nothing.
5. RNG - Not something that bugs me that much but I don't think that RNG should be a mechanic in this game. Random Number Generators are fine when they're tied to desperate last ditch efforts (pulling yourself off the hook) but they shouldn't be tied to basic Survival mechanics. This is a problem that Pig, Trapper, and Freddy alike all share which makes them far less consistent at high ranks that Killers with reliable no-nonsense powers like Hillbilly, Spirit, and Hag.

With all of these problems in mind here are some ideas I have to make Trapper more fun and consistent:
QOL CHANGES
Trap hitboxes greatly expanded. Will now trap Survivors in a much larger aura around the trap so that traps can't be avoided by hugging walls.
Trapper now spawns with 2 traps on base and can carry 2 traps at a time on base. All the various bag addons remain unchanged. (IE Stitched Bag allows for 4 traps, not 3.)
Various coil addons will now reveal Survivors after they disarm a trap. (1, 3, 5, 7 seconds based on rarity.) This gives the coil addons a use in-line with Hag's "Pussy Willow Catkins" and "Willow Wreath" addons.
Serrated Jaws and Rusted Jaws merged into one addon.
Number of traps per map increased. (See Big Rework below)
Escape time from traps more standardized - Possibly tie Coil addons to escape time (and make Wax Brick slow down aided escapes.)
MINOR QOL CHANGES
Can now reset a trap when inventory is full. Pressing the pick up button when you have a full trap inventory will play the trap placement animation and activate the trap.
Trapper can't step in his own traps. Seriously why is this still a mechanic? No other Killer can directly damage their effectiveness with their own power other than Trapper.
THE BIG REWORK CONCEPT
Max number of traps now tied to map size. Number of traps on map is tied to the size of the map in square tiles divided by 10, rounded to the nearest number. (Example: Family Residence is 156 square tiles large so you'd have a maxium of 16 (15.6 rounded up is 16) traps. Gas Haven is 164 tiles large so you'd have a maxium of 16 (16.4 rounded down is 16) traps.) (If this is too much just give Trapper 10 traps tbh.)
Traps do not spawn on map; restock on traps by interacting with lockers. Interacting with a locker will refill your trap stock to full, with maxium stock based on Bag addons. Attempting to place a trap past the trap limit will case the oldest trap to break. (Akin to Hag's traps.)
Disarmed Traps will rearm after a certain period of time. (Tied to Coil addons.) Sabotaged traps disappear and are removed from the total number of traps on the field.
As a result traps can now be sabotaged without a Toolbox or the Saboteur perk and total sabotage time is reduced.
Traps disappear after Trapping a Survivor.
New effect for Iridescent Stone: Traps can not be sabotaged and Traps don't disappear after being triggered. (Possibly makes Traps take longer to rearm to compensate.)

The idea behind this rework is to give Trapper a lot more utility, similarly to The Hag. While Hag has expanded mobility with her traps Trapper would have the strength to end chases with his traps. This rework idea is perhaps a bit overkill and could use tweaks. I do however think the core concept is solid.