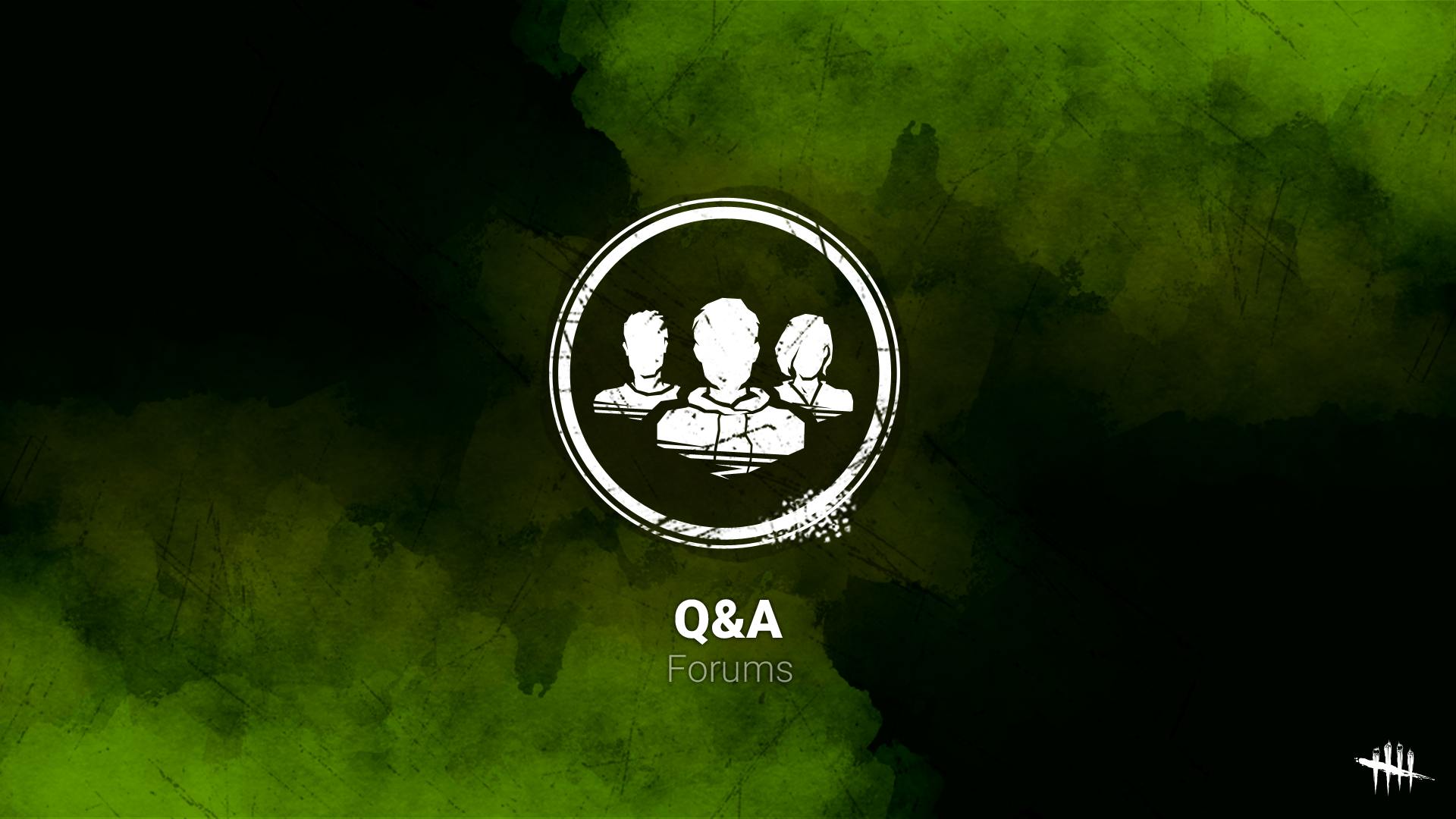 Dear Developers, I have a short question. Because of the recent decisive strike change, will Dying Light get modification (like a slight buff or some effect changes) to combat it?

No, but we would like to change Dying Light, so that it is less tunneling and oppressive.

Will you be changing the Calm Spirit to affect the scream from illness and Infectious Fright or are those not affected?

Calm Spirit should be negating the Scream and notification from Infectious Fright, it does not affect illness as there is no loud noise or scream generated by illness.

Was the Plagues power always meant to be her spewing vomit? Or were there other ideas that you had for her power?

We wanted from the start that her power would involve vomiting and spreading sickness, but we didn’t know what it would do. Direct damage was tested very early on and decided that it was too powerful to make it into a base power effect. We tested out with slowing Survivor down, getting Exposed, reveal location (madness), but all those felt overpowered or unfun and unfair on the survivor side. We discarded slowing repair speed idea because we consider this effect to be a minor hindering to survivor and bring up a feeling of tediousness to the gameplay. Overall, not fun and not worthy to add. After multiple version we settled to injure and broken with the loop involving the fountain we currently have in the game.

What was the reason for the DS Stun to not be effected by Enduring?

Decisive Strike’s stun time was aimed to be the same as the Wiggle Free/ Grasp Escape times which is 3 seconds. Decisive Strike and Head On will now be affected by Enduring.

Can you please make Fire Up gain a stackable bonus of 4% for each generator popped instead of the 3% implemented in the Ptb? Many people still find it a underwhelming perk.

The new map seems like red forest 2.0 i was waiting for a new map not a remake like happened for the clown too. Can a map be changed in future with the lore?

The temple of purgation is set in the red forest theme. Even though we would love to create a unique theme for every killer we release, it’s not something that we can do production wise in our current situation. That said it is important to us to have key environmental components for the characters that do not have a theme, hence the carnival tile in Father Campbell’s Chapel and The Temple of Purgation in red forest. To answer the second part of the question, we don’t know what the future holds, it is a possibility that we explore the missing themes later.

We're having more and more characters and is hard to gain bloodpoints to prestige all of them and make everyone have all the teachable perks. Will be new ways to get bloodpoints easier?

We are currently looking into ways that we can improve bloodpoint income and simultaneously reduce the overall grind. Can’t give any specifics or dates for now, but it is an area that we intend to address in the future.

Will the ability for survivors to get fully healed on the fountains be removed on the full patch?

Not at this time, we feel at the moment that it is the right effect to balance her powerful Purge Effect.

Any plans on removing the Insta-heal off the Plauges power? I feel it's the right buff she needs to help make her a little bit stronger.

We are thinking of changing the insta-heals in our game into heals over time instead. This means that instead of instantly being healed a health state, you will initiate the heal and it will take several seconds before you are fully healed. Imagine the opposite of Deep wounds, if you are hit before the heal over time finishes, you will be considered injured, and knocked down into the dying state.

Are The Plague perks final, or will they be receiving updates as time goes?

We always review the Perks at some point based on players feedback and data collected. Live team will follow these closely once the Perk goes live.

Why wasn't Vile Purge given the ability to Hinder/Reduce action speed instead of simply hurting (with broken as bonus)? Would fit the killer a lot more and make her power a lot more interesting.

Hindering was tested out early in the Power iteration and was quickly identified as an extremely annoying and unfair penalty. It was also directly encouraging the tunneling of a sick survivor.

Are the changes to the emblem system final?

No, they are not. Certain emblem scoring and thresholds have been adjusted from the PTB already, and we will continue to monitor and maintain the system once it goes live. Look out for more information regarding emblems and pipping soon!

Rank rewards is not something we considered for this iteration, but it is something we would like to incorporate in some way for future iterations.

Will you be giving perks like Resilience or This Is Not Happening some love since Thanatophobia got a buff (which is definitely much appreciated, btw)?

We have reverted the Thanataphobia buff for this patch and we will be looking to update the different healing components together in addition to Thanataphobia in a future patch.

What Made You Think That Barbecue And Chili, Hex:Ruin And Thanatophobia Needs a Buff? They Were In A Good Position And Used By Many Killers.

Barbecue and Chili and Hex: Ruin had adjustments to their Tier 1 and tier 2 values to make them more similar and appealing to their Tier 3 counterparts, the Tier 3 of these perks should be the same as they are currently live, Thanataphobia’s value changes will be reduced for this patches release to 3/3.5/4% stacking up to 12/14/16% instead of 4/5/6% going up to 16/20/24%.

Is plague being played as you intended? Or are people using strategies that you didn't think of?

Yes, although it took players a bit more time than expected to understand her full potential, but she is indeed a complex Killer. We still believe that just like the Spirit, players will overtime accommodate to her unique play style and discover her true power. We did found out that players were very creative with mixing her power with certain Perk combo.

Post edited by PatBrutal on March 2019
32
This discussion has been closed.