We are entering another "Dark Times" 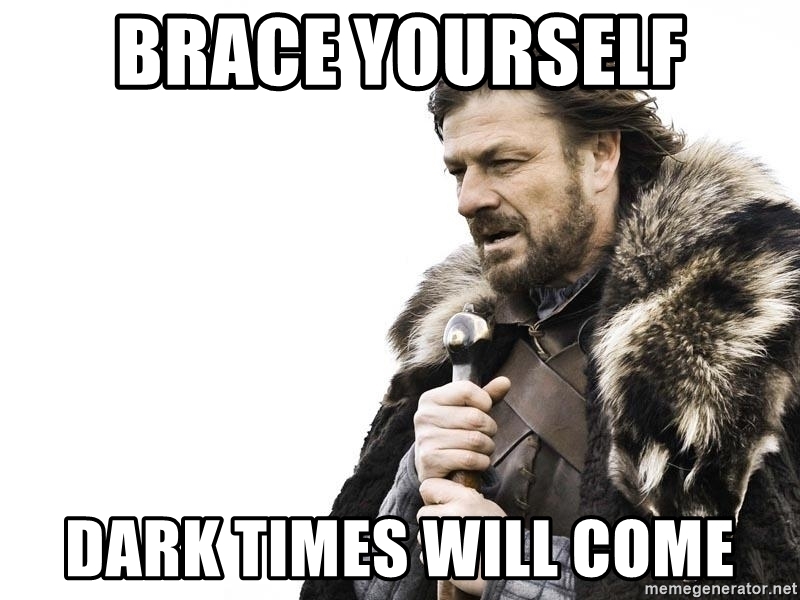 I want to preface this thread with a minor dsclaimer:

We can still potentially avoid these "dark times" if the devs act quickly.

With the current flaw in the emblem system and the recent nerf to Legion, I'm not the only one who is fearful for Freddy but that's for later on in this thread.

Dead By Daylight is currently in a bad way, with Survivors being rewarded for damn near exploiting in order to escape a killer, killers unable to keep map pressure(the exception being Hillbilly with movement control addons), survivors finding new ways to pretty much infinite a killer, and killers being punished for being really good or survivors "giving up".

Things are not looking good for killers currently and I'll go over each issue individually.

THE CURRENT FLAW WITH THE EMBLEM SYSTEM:

As it stands the current emblem system looks great... on paper. The reality however is far more bleak.

Killers are forced to chase survivors for extended periods of time in order to to even get a gold in their Chaser emblem. Meanwhile, the entire time a chase is going on, all the other survivors are working on gens which hurts the killer's Gatekeeper Emblem and the killer must keep at least 4 gens inactive for 7-9mins in order to get gold. Even if a killer ends a chase in less than 15 seconds, unless they chase the 3 other surviors

But I hear you saying: "You don't have to keep chasing that survivor! You can leave them and go defend the other generators!" And you're right but the moment you stop chasing that other survivor, they resume working on another generator and until you find another survivor and begin another chase the other 4 survivors 2 times each and down each of them in less than 15 seconds, they will not get gold in their chaser emblem.

And this isn't even talking about how long the average chase lasts.

On top of all this, the killer's malicious emblem takes a major hit if they are too good as well since it requires 30 points to make gold and hitting each survior twice, hooking them, and them hitting stage 2 hook progress only grants 24 points.

This means that the killer must allow at least 2 survivors to be unhooked and chase 4 survivors while making sure to end the chase in less than 15 seconds in order to get gold in their chaser and malicious emblems. Meanwhile, the entire time, their gatekeeper is being chipped away with every gen that completes.

So a killer is forced to play moderately badly in order to have a chase of getting a single pip for as late as rank 9 and survivors abuse this knowledge extensively but more on that later.

Meanwhile, survivors are rewarded far more with far less strict requirements for completing their objectives. Even if a survivor isn't chased once, all they have to do is complete two gens, save 2 survivors+heal them to healthy state, and open the exit gates and they have a guaranteed pip for as late as rank 9.

So as anyone whose played this game for more than 3mins knows, one of the biggest parts of this game is chasing and being chased but no seasoned survivor is going to run in a straight line. One of the survivors biggest defenses and arguably the biggest exploit they use, is looping the killer around a pallet for an extended period of time before dropping said pallet on the killer's head.

This is also known as "Pallet Looping". The reason why the killer is unable to catch a survivor during a pallet loop is because their hitbox is smaller than the killers which allows them to slide along the corners of objects to keep ahead of the killer while the killer must go around said objects which slows them down. Until Bloodlust was implemented, a survivor could potentially loop a killer indefinitely.

Even with Bloodlust, seasoned survivors have figured out ways to keep their distance from the killer and even break line of sight for long enough that even the hillbilly will NEVER make Bloodlust tier 3 which would be required to close the gap in order to hit the survivor and end the chase. This has led to killers being ran through what I call a "pseudo infinite".

The killer can chase the survivor for the entire game and NEVER CATCH THEM when they run one of these pseudo infinites. Even a pallet loop will eventually come to an end but an pseudo infinite WILL NOT.

More and more survivors are using these pseudo infinites when a chase begins if they are available and they more often than not are. This had led to killers abandoning chases every time they realize they are being ran though one of these pseudo infinites but its not always obvious and thus the killer often wastes valuable time chasing them.

Between pallet loops and pseudo infinites, the odds of a killer getting a single survivor on a hook before 3 or more gens are done without Hex: Ruin are extremely low and even with Hex: Ruin, seasoned survivors will still break the totem or power through it making the perk pointless.

This has led to most killers getting at most, one sacrifice per match in most of their matches and after awhile this begins to grate on a killer's nerves, especially when they often depip as a result of this.

THE DARK TIMES ARE UPON US:

So, with all this said, killers are in a bad spot in the current meta and that's not even including all the perks that render most killer powers/perks useless and if I went over the details of all that would extend this thread OP by 3 pages worth so I won't go over it here.

If you have an opinions on this please let me know but please do not try to say any of this is untrue because then your just trollbaiting and we all know it.