A Beginner's Guide To Perks #3: Object of Obsession

This guide is constructed around my game experience (of 1000+ hours) and is my opinion only. It is not necessarily the correct and only way to play. Play however you like! The guides I publish will centre around perks or simple concepts to help newer players understand how to maximise the effectiveness of their perks.

‘Object of Obsession’ is a teachable perk that is unique to Laurie Strode until Level 35. The perk icon is as follows, along with the perk’s Tier 3 effects: 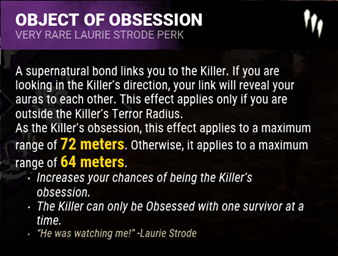 ‘Object of Obsession’ can be highly beneficial to the survivor team although it is very tricky to properly use and carries many risks.

In other words: while using this perk, when looking in the killers direction, their aura will be revealed to you. The killer will also see your aura. The auras will only be shown if:

-You are not in the terror radius of the killer

-The killer is within a range of 64 metres from you (72 if you are the killer’s obsession).

Killers can also run obsession perks which will apply to you if you are the current obsession, be aware of this when selecting obsession perks such as ‘Object of Obsession’. Having an obsession on the team can be beneficial to the survivors because when being chased the tendril-like icons will move around the obsession’s icon in the survivor HUD. This signals to other survivors that the killer is preoccupied and they are safe to do generators.

How to Obtain It

4) Look under the heading ‘Perks, Teachables’

5) Hover over the icon to the top right of the perk and it will tell you whether you have unlocked it. E.g.

Conversely, ‘Object of Obsession’ may be available on the Shrine of Secrets. Since it is an old perk, it will cost 2,000 iridescent shards. The Shrine of Secrets is a store to unlock teachable perks from which houses 4 new perks every week. It refreshes every Wednesday at 00:00:00 UTC. E.g.

Note: ‘Object of Obsession’ is not currently available in this week’s Shrine of Secrets. The image above is just an example of the Shrine.

How to Use It in a Match

‘Object of Obsession’ is very difficult to use because it reveals your location to the killer as well as the killer’s location to you. Being selective about when you observe the killer’s aura is key to avoid being found easily.

Start of the Match

‘Object of Obsession’ is incredibly valuable at the start of a game because it allows you to see what killer you are up against and plan accordingly. If you are in a Survive with Friends game, it also will allow your team to prepare to face the killer. Guessing which killer it is from the aura may be a bit tricky because the auras of some killers look quite similar although eventually you’ll be able to tell very accurately. A common mix-up is the aura of The Trapper is similar to that of The Clown.

Tip: If the killer is The Nightmare and you are not in the dream world, Object of Obsession will still light up when looking in the killer’s direction but it will not reveal The Nightmare’s aura. This means you can quickly identify the killer even when you cannot see their outline. Be careful though because when the perk is lit up, The Nightmare can still see your aura. 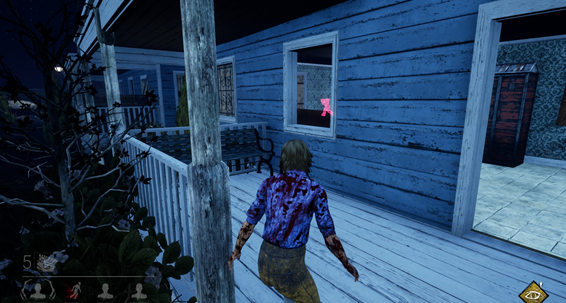 E.g. here we can identify that the killer is The Hillbilly and ensure that we [the survivors] do not position ourselves in exposed and open areas where we are vulnerable to The Hillbilly’s chainsaw.

Even if the killer’s aura is not visible to you at the start of the match you can still learn valuable information. Not being able to see the killer’s aura means that they are more than 72 metres away from you (provided you are the obsession and running tier 3 of the perk). This tells you that the killer is a safe distance away for you to repair generators etc.

‘Object of Obsession’ is best used intermittently rather than being used continuously to monitor the killer. You have to be aware that when you see the killer, the killer also sees you. Only looking at the killer in short bursts provides the necessary information but restricts the killer’s ability to know your whereabouts. For example, if you are observing the killer in bursts while running you’ll be able to know what the killer is doing but they’ll only see glimpses of you. This means they have to fill in the blanks and try to guess where exactly you’re going, if they’re even focused on you.

‘Object of Obsession’ is a good indicator of when it is safe to perform activities. Knowing where the killer is at any given moment allows you to plan your movements as well know where to avoid. E.g. 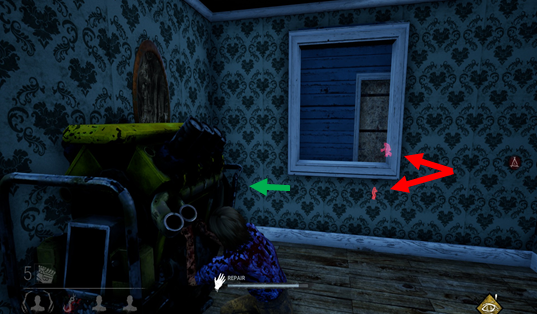 Here I can see that the killer is staying in close proximity to the hooked survivor so going for a rescue would be risky. I am then able to make the decision that staying on the generator would be a more worthwhile and safer option.

‘Object of Obsession’ is additionally useful to maintain map awareness. You can learn a lot about resources available to you by monitoring the killer’s actions. For example: 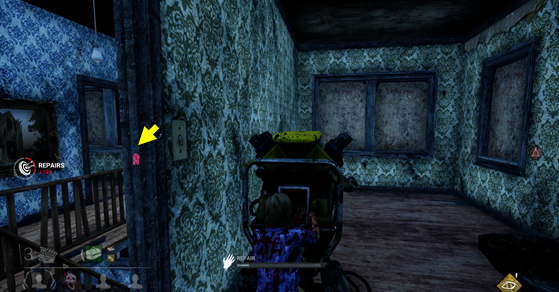 Here I can see that the killer is stunned. I can therefore identify that a pallet has been dropped in this region of the map and will likely be destroyed by the killer. I am able to make a mental note of this and avoid this area of the map in a chase as it has had nearby pallets used up.

Another similar use is seeing where the killer goes first thing in the match. Killers tend to check Hex Totems as a priority when starting a game so if you are cursed then you can judge where the Hex Totem is most likely to be depending on where the killer first went. The cursed icon is as follows:

These methods work best when you are able to communicate your knowledge of the killer to other survivors. Either through Survive with Friends or coordinated emotes (point default 1, come here default 2). Sharing the killer’s location to other survivors benefits them in the same way it does you. E.g. 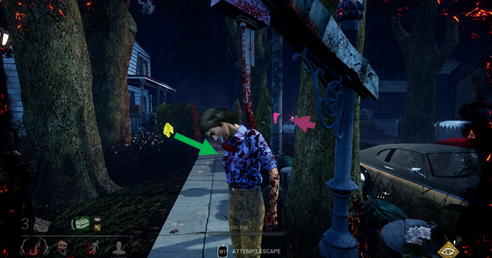 Using ‘Object of Obsession’, I can determine that the killer is a safe distance away and signal to my teammates to come rescue me from the hook.

Instead of using ‘Object of Obsession’ to develop your awareness of the match, it is also incredibly useful for gaining the killer’s attention. This is also incredibly dangerous if you are inexperienced in chases. However, if you are a strong runner and are able to waste the killer’s time, letting the killer find and chase you will buy your team precious time to repair generators. Many killer’s feel threatened by ‘Object of Obsession’ due to how much power it gives the survivors so they will often attempt to eliminate you from the match quickly. If they focus on you too much, it will allow the team to do generators and ultimately be a loss for the killer. If this is not your preferred use of the perk, you can use the following tips to still gain the appropriate knowledge but avoid being seen by the killer.

1)     Use lockers. While in a locker neither you nor the killer will see auras (as you will suffer from the ‘Blindness’ status effect). However, the perk will still light up when looking in the killer’s direction. This can tell you where the killer is without being spotted. I.e. 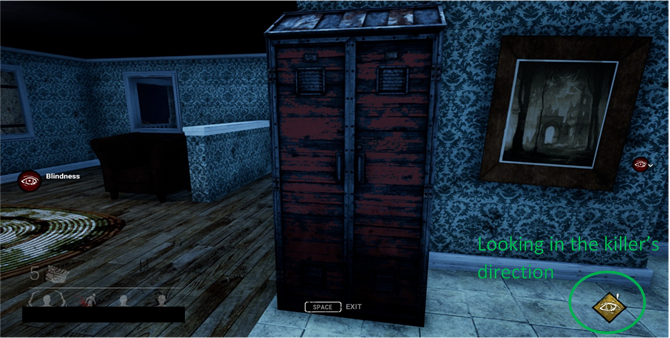 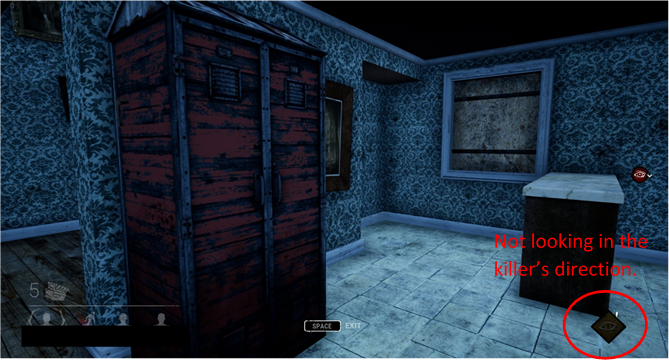 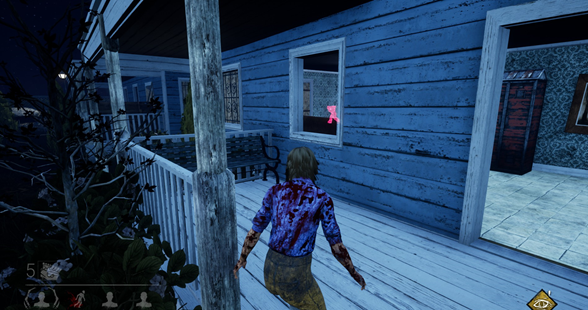 The killer is not looking in my direction here so will not see my aura, although I can still see theirs.

Using this perk takes a lot of practice and you will likely struggle in the first few matches, although you will get much better the more you practice.

This is a very risky perk to run because it reveals your location to the killer. Moreover, many killers may attempt to kill you very quickly in order to remove you from the match as killers find it very frustrating. Therefore, use it wisely!

‘Object of Obsession’ works best with a Survive with Friends team so you can relay your information and be more coordinated. However, it can still be very useful in solo queue.

Moreover, this perk works best with perks to hide your aura from the killer. That way, you can still see the killer but they will be unable to see you. These include:

-‘Distortion’. This hides your aura temporarily but stacks of it will run out very quickly so may not be the most suitable option although it can work if you so wish.

-‘Sole Survivor’. This perk gets stronger with the more survivors that die. This hides your aura at an increased range as more teammates die. It works well with ‘Object of Obsession’, particularly in the late game.

Perks to quickly get into lockers may also be useful. E.g. ‘Quick and Quiet’ will allow you to perform a rushed locker entry without alerting the killer.

You should also prepare perks to run or evade the killer while using ‘Object of Obsession’.

Good perks in a chase include:

-Exhaustion perks such as ‘Sprint Burst’, ‘Dead Hard’, ‘Balanced Landing’ or ‘Head On’

Perks that increase aura reading may also be useful:

-The Wraith (base 32m, although can cloak and have a 0m terror radius)

Note: All statistics are from the wiki or the game itself.

Thanks again if you read this far! Any suggestions for future guides are welcome, as is any feedback. This one was another request by @AlsoArrow . It would be awesome if you could check out my other guides too!