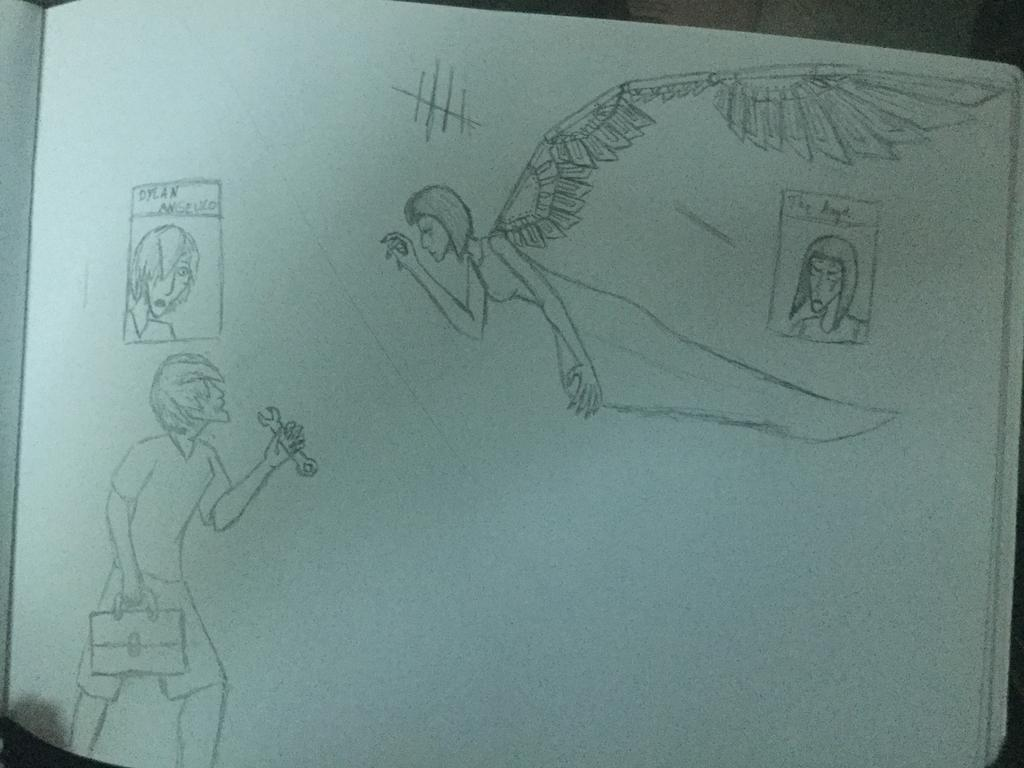 (I originally put this concept on my dA account, which you can find here: https://www.deviantart.com/noctis-corvus)

No matter how many people try to cheat death, there is always more who will try, regardless of the consequences. Taking a note from Dr. Frankenstien's method, an engineer stitched the corpse of his wife, Rachel Angelico, back together... but just as predictably, it didn't become the risen angel he hoped it would be...

In the end, all that was found was the mangled corpses of the engineer, and his daughter, both stuffed with mechanical parts and wiring. The truly terrifying note to all of this is that the machines were put together correctly, that they would have worked perfectly... but they remain inactive. The bodies of his son and wife are missing and were never found.

She will use her wings to fly above the map, where she can see a birds eye view, and grab any unsuspecting survivor to carry them to the hook. However, survivors will notice an absence of sound within the terror radius, which will let them know of the impending doom. They can try to run, which may be successful, but that doesn't mean she can't still find you when grounded.

Angelic Wrath: When stunned, your anger fuels your determination. Your actions are now faster and the survivor who stunned you is now exposed for a limited, yet decent, amount of time (perhaps 20/25/30 seconds).

Elegance: You can now cross pallets instead of breaking them, at normal vault movement speed. Windows can now be crossed 15% percent faster. This effect stacks.

Crossed Wires: When a generator explodes within your terror radius, there is a 15% chance that the generator will be locked up, and unable to be repaired for 60 seconds. It also starts regressing at 60/55/50 seconds, and regresses 1/1.5/2% faster.

The Angel will quickly flip over the survivor, and pin them down. Reaching her "claws" back, then quickly buries them into the survivor, up through the ribcage. She then rips out and watches the heart as it slowly stops beating.

Infrared sensors: Survivors caught by the Angel have an elevated heart rate, causing infrared sensors to be able to detect them easily. Survivors within the terror radius show up as auras. Only applies during divine flight.

Improved Audio sensors: Survivors show up as noises when within the terror radius when they first enter it (during Divine Flight).

Bloody Fingernails: Survivors hit by Divine flight aren't grabbed immediately, but are hit once. They are then broken until they are put onto a hook.

Heavy Engine: The Angel is equipped with a heavier engine, so higher flight is not possible, but now she has an increase in general movement speed and Divine flight is now a direct line instead of above the map (similar to the hillbilly's chainsaw, but you can go through windows and above pallets). Colliding into anything will cause a lengthy stun animation. Tricky to master.

Oxidized fingernails: survivors hit by the Divine Flight grab are afflicted by the mangled status effect until they are healed to full health.

Improved Visible Light Sensors: Survivors within the terror radius during divine flight are distinguished by more vibrant colors compared to their environment (their outfits stand out more, in other words).

Polished Fingernails: Survivors hit by the Angel suffer from exhaustion for 60 seconds.

New Fingernails: Survivors hit by the Angel suffer from exhaustion for 40 seconds.

When some try to cheat death, others will suffer in their place. A prisoner now, as he was a prisoner then, he knows what it's like to be forced to work for something else. An evil hidden in plain sight.

Internal Suffering: If you take a hit for another person from the healthy state, the perk activates. You gain endurance for 40/45/50 seconds. When you get hit when this perk is activated (when you have endurance), you become broken for 50/45/40 seconds, but the speed boost from getting hit is .5/1/1.5 second(s) longer. This perk can only be activated every 60/55/45 seconds.

Masochism: In order to stop death in the past, you have taken the opportunity to have yourself hurt instead of others. For each hit you take, you gain one token. Each token increases your speed by .5/1/1.5%, and your altruistic actions by 10/20/30%. (a maximum of 4). Your base speed is faster, your action speed is faster... however, you lose all tokens when hooked, and suffer from exhaustion for 60/45/30 seconds.