In The Dark (Creepypasta-based chapter) 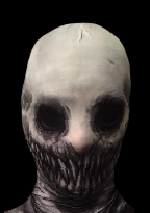 Based off of a creepy pasta, this chapter adds in The Rake as a new killer. The following is a fully developed Killer character idea.

The Rake is a psychedelic Killer. He is fast, but has a relatively large terror radius.

When a survivor enters The Rake's terror radius, they are inflicted with extreme psychological damage. The survivor's control inputs are inverted and the screen is cast with a distortion similar to when a survivor is inside The Clown's tonic. This lasts for 3 seconds, and cannot be activated again for 15 seconds. (This timer is survivor-based, so the timer is not universal)

The Rake can place a maximum of 3 traps that give off the same effect. The traps cannot be triggered once inside of a chase. However, when the survivor IS in a chase and steps on a trap, they are given the Madness status effect.

Similar to The Hag's claw, there is no physical weapon.

When the survivor is spotted by the killer and enters a chase, the killer's terror radius depletes to 0 for 10 seconds. During this time, the killer has no red stain. Has a 60 second cooldown.

While the hex totem is active and NOT cleansed, all perks that allow the location of the killer to be revealed to the survivor's are rendered completely useless (This include things like premonition and spine chill. They are just grayed out until the hex is cleansed).

When a generator is completed, all the survivors that completed the generator have their location revealed to you for 3 seconds. However, their scratch marks are invisible for the remainder of that time.