What are Bloodpoints and the Bloodweb?

One of the most important parts of Dead By Daylight is Bloodpoints and the Bloodweb. It is the main way you will obtain items and the only way to get perks and offerings. It is different from most games, and may seem confusing at first, but it's surprisingly simple once you get into the game and start playing and unlocking things. In any case, let's hop right in! 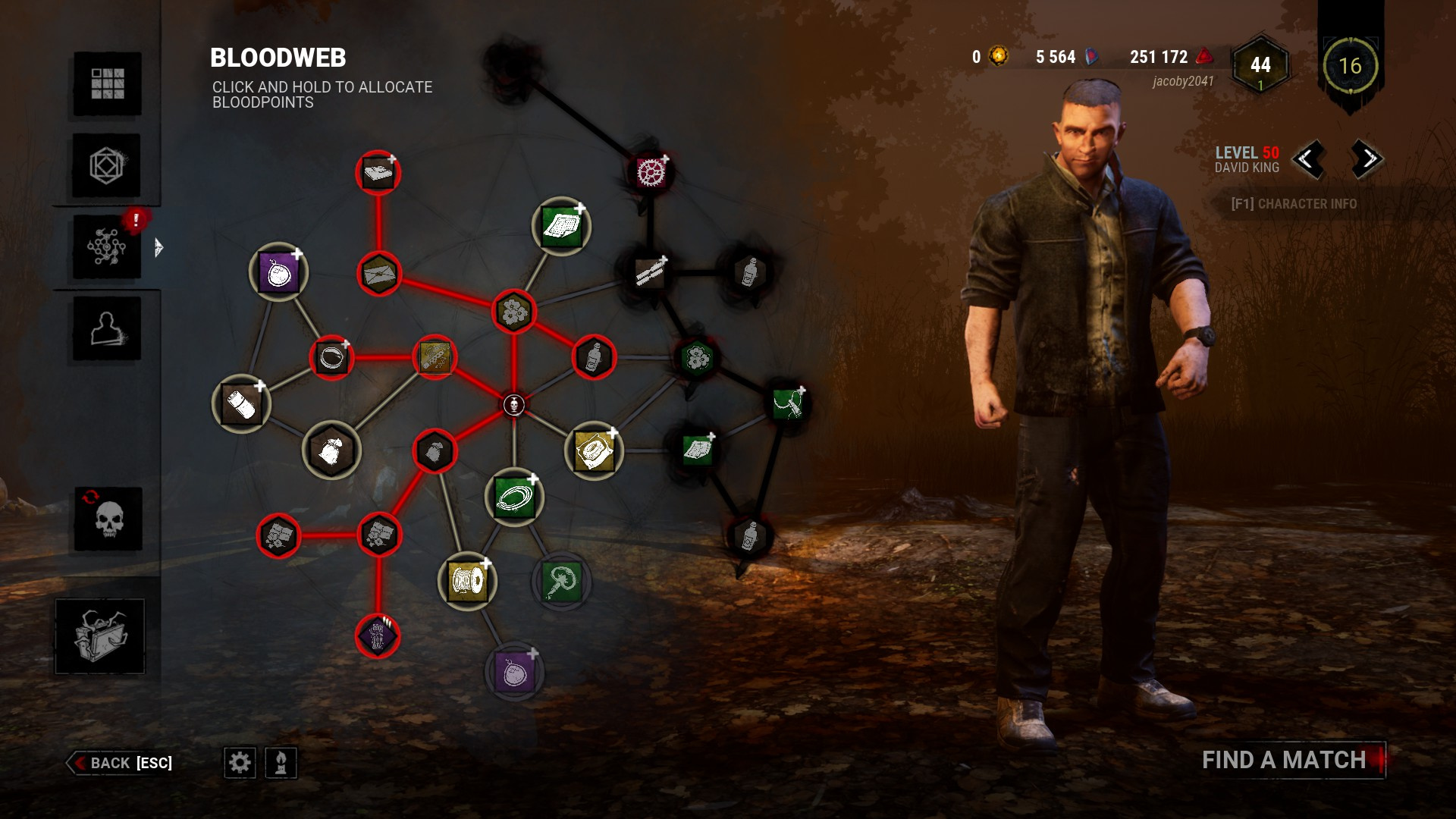 Above, you can see my Bloodweb for David King, a survivor. Each character's Bloodweb is specific to them, and the items obtained from it can only be used when playing that character. That means anything I get from this Bloodweb will only go into David's inventory and my other survivors won't be affected. Once every item on this Bloodweb has been collected or taken, David will increase by one level and a new Bloodweb will be generated. This way, you never run out of items and you can always get more if you have enough Bloodpoints.

Looking at the above image, you will see that some items are connected by a red line to the middle, and are circled in red. These are items I have already collected. The items with a yellow line and circle are ones I can collect next but haven't. The items with a gray line and circle are items that I can't immediately reach but are still available should I reach them. Lastly, items that are encircled with a black circle have been taken by the Entity, and I can't obtain them anymore.

Once your character is a high enough level, the Entity will start appearing on their Bloodwebs. After that point, when you collect a few items from it, the Entity will begin to take items as well. It will only take one item for every item you collect, so you can strategize to get the items you want and allow it to take the ones you don't. It will always prioritize items that are far from the center and items that are directly connected to the item it last consumed. Items you have already collected can't be taken by the Entity. If there are multiple perks present, it will always take a perk after you take one, so keep this in mind.

Bloodpoints can be obtained by completing Daily Rituals or by doing any of the following in a match:

Almost all actions you can perform as either side will give you some amount of Bloodpoints. You can earn up to 8,000 Bloodpoints in each category per match, for a total of 32,000. Bloodpoints can be increased by certain perks and offerings. You can hold up to 1 million Bloodpoints in total (outside of matches).

I'm not going to elaborate on items, perks, offerings, and addons in this guide, but they are pretty self explanatory once you start unlocking and using them, so don't worry too much about those. In fact, don't worry too much about anything! This guide may seem a bit long, and there are some complex things in the game, but I think the Bloodweb is pretty intuitive and surprisingly easy to understand after you play the game for a while, even if you aren't a gamer.

A few extra tips I didn't mention in the rest of the guide:

You should try to unlock perks as much as you can, since you get far fewer of them than everything else. Perks also won't get consumed when you use them so it's good to get more so you'll have more choices of what you want to use.

In short, you play the game to earn Bloodpoints which can then be spent on a character's Bloodweb to get items and perks for them. That's about it, so get in there and have some fun!