How to play: The Huntress

The Huntress is slower than usual killers, she sings a lullaby that survivors hear throughout the entire match, being informed if she is nearby, gaining time to hide from her. Yet, these minor weak points are mitigated by her immense power, Hunting Hatchets. 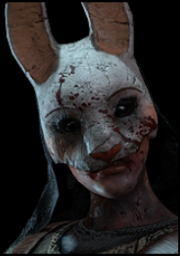 It is very simple to explain how hatchets work: they are a ranged attack. Hold your M2 (L2 on Ps4 or LT on Xbox One) to bring up your hatchet and release to throw it. Holding the hatchet for few seconds will max the throwing speed (you will be notified by a sound cue). When you bring up an hatchet your movement speed will be decreased. You have a limited amount of hatchets that can be reloaded whenever you want by opening a locker.

I highly suggest you to try this build when you approach to The Huntress for the first time, it's made with generic perks and Huntress specific, so you won't need to level up any other killer in order to use it:

It consist of Whispers and Bitter Murmur to easily find survivors, Hex: Huntress Lullaby to slow down the generators progression and Sloppy Butcher to increase the healing time.

This is the build I run on Huntress, the first three perks are a must in my opinion, while the fourth one is up to you, you can change it based on the match:

Barbeque & Chilli is very helpful to find distant survivors and trying satisfying long-shots, A Nurse's Calling helps you finding healing survivors and Hex: Ruin slows the game immensively. As I said before the last perk can be changed, I use Monitor & Abuse to catch survivor off guard, but I replace it with LightBorn when I see flashlights in my lobby or Whispers to find survivor easily. Have fun trying some perks!

It's very comprehensible that the first matches you'll play you will miss some of your shots, that's why I suggest you to run two possible add-ons combinations.

that allows you to be able to attack faster after throwing an hatchet, decreasing the window the survivors have to react.

And the Leather Loop and Infantry Belt add-ons:

thanks to these add-ons, you'll be able to carry up to 3 more hatchets, saving you from some hatchets miss.

Once you're pretty confident with your aim ability you can use debuff add-ons, to hinder survivor heavily after landing a good shot. My favorite combination is the Berus Toxin to give Exhaustion to the survivors and the Yawn Seed Concoction to slow survivors after the hit.

You could also try the instant hatchet throw combo, consist of Flower Babushka and Manna Grass Braid add-ons, though I'd recommend you to use it only when you have mastered your aim, because to use this combo's full potential you need to be quick and reactive with your shots:

Before you can land complicated shots, you need to start from the basics:

When you're chasing a survivor you will often encounter pallets. You can easily land a shot on survivors when they are dropping a pallet, here's a GIF I've made to show you:

Remember to slightly move backwards to avoid the pallet stun.

Similar to the first shot I described, you can land another easy hatchet hit on survivors when they are vaulting a window, just aim at the window and throw the hatchet.

How to improve your aim:

The Huntress is one of the hardest killer to master and a good aim is essential to be deadly with her. The hatchets direction is roughly in the center of the screen and remember that held hatchets travel faster and are harder to avoid. To improve your aim I suggest you to exercise on still targets, and what's better than a hooked survivor for this role? Remember though that Dead By Daylight is a game where time is a tyrant, so I suggest you to practice this way, only when the game is already finished, as the last survivors are being sacrificed, otherwise you'll only lose time and waste hatchets.

After you exercised with your conveniently hooked survivors and the easy shots I wrote above, you're ready for some freestyle, get creative with your power, muscle memory and predict are highly suggested, here some GIFs that may help you understand what I mean:

I hope this guide has been useful, I really had fun writing it, since, as you can easily tell by my profile pic, Huntress is my favorite killer. She's one of the hardest, yet most satisfying killers to play, have fun!