Home › Guides
The 3.6.0 PTB is now live on Steam! For full details, click here: https://forum.deadbydaylight.com/en/discussion/130916/
We are aware and looking into the issue which caused players to have their rank reset further than intended. If your rank was not reset at all this month, this is a visual bug and closing and re-opening the game should fix it.
We have updated our Forum Rules. Please take a moment to read through them: https://forum.deadbydaylight.com/en/discussion/87004/

How to Play: The HillBilly

The Hillbilly is a normal movement speed killer with a very strong power: The Chainsaw. Thanks to his optimal perks and his powerful, yet easy to use, ability, Hillbilly is one of the first killers I'd suggest you to use as you approach to Dead By Daylight. 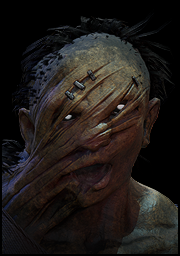 Very easy to understand: press M2 (L2 on Ps4 or LT on Xbox One) to rev your chainsaw up, hold it to charge it for few seconds, then unleash your true power. Once you charged up your chainsaw, you'll be able to move extremely fast, instantly down a survivor after hitting them with your chainsaw and destroying pallets very fast. Release the button to end the ride, when your aiming at a pallet or a survivor it will automatically end, if successful. Remember though, with great power comes great responsibilities: when you're riding the chainsaw your mobility will be highly hindered, giving you the chance only to slightly redirect, also bumping into objects or walls will stun you for few seconds, giving the survivors time to gain distance from you.

Here's a build I'd suggest you to use the first times you play The Hillbilly. You can use it without leveling up any other character, since it's made with Hillbilly specific perks and generic perks:

We have Enduring to reduce the stun from pallet hits (it won't reduce the stun when you hit objects or walls with the chainsaw), Whispers and Bitter Murmur to easily find survivors and Tinkerer, that will inform you when a generator is nearly completed, granting you the ability to sneak up on survivors.

The strength of The Hillbilly allows him to have a free choice on his perk combination, I'd like to show you though the most used build for him:

Spirit Fury grants the ability to passively destroy pallet that stuns you (after breaking a certain amount of pallets), paired with Enduring to reduce the stun time it creates one of the most solid combo in the game. Barbeque and Chilli shows you distant survivors, that you can easily reach thanks to your power. The last one is Hex: Ruin, to slow the game down; as you master your skill with Hillbilly you might also remove Hex: Ruin for something else, it's up to you.

When you gained some experience with The Hillbilly, I suggest you to try out this add-ons combo, to create what in the community we call "Drift Billy". As I said before, when using the chainsaw you give up mobility, in order to gain speed. Thanks to these add-ons, Thompson's Moonshine and Spiked Boots, you will have much more freedom with your chainsaw. It's the funniest build to try out with the Hillbilly, but requires some practice before.

how to use effectively the chainsaw:

In this section I will show how to master The Hillbilly's power, with some examples:

Master the art of Pretending:

This is a great advise to use whenever you're playing killer, whatever killer you're playing with. When you spot survivors hiding behind a tree or a rock, do not directly run at them, otherwise they will understand they're not hidden anymore and start running away. Instead, run near that area, facing another direction, then at the last second surprise the survivors. Here's a GIF to make you better understand:

As you saw, after spotting the survivor, I revved up my chainsaw, pretending to aiming towards somewhere else, just to turn at last, catching the survivor off guard.

A great limit of the chainsaw are windows. Even though, after some practice you'll be able to tell when you can hit survivors before they vault a window (or as they are vaulting a window), for some time I'd suggest you to avoid chainsawing a survivor who is trying to vault, you should rather play around the window, predicting the survivor movement. Here's some examples:

Don't expect survivors not to look behind them, be always prepared for a reaction and be ready to counter it:

As you saw, instead of going straight in the upper harvester, I slightly waited, knowing that the survivor would have changed his direction at last.

If you spot a survivor hiding in a narrow place, don't be eager attacking with your hammer, instead get near the survivor, block him against the corner and hit him with the chainsaw, for a free down:

Hope this guide has been useful, The Hillbilly is a very funny killer to play as, he has a lot room of improvement and he's perfect for your first matches in Dead By Daylight.