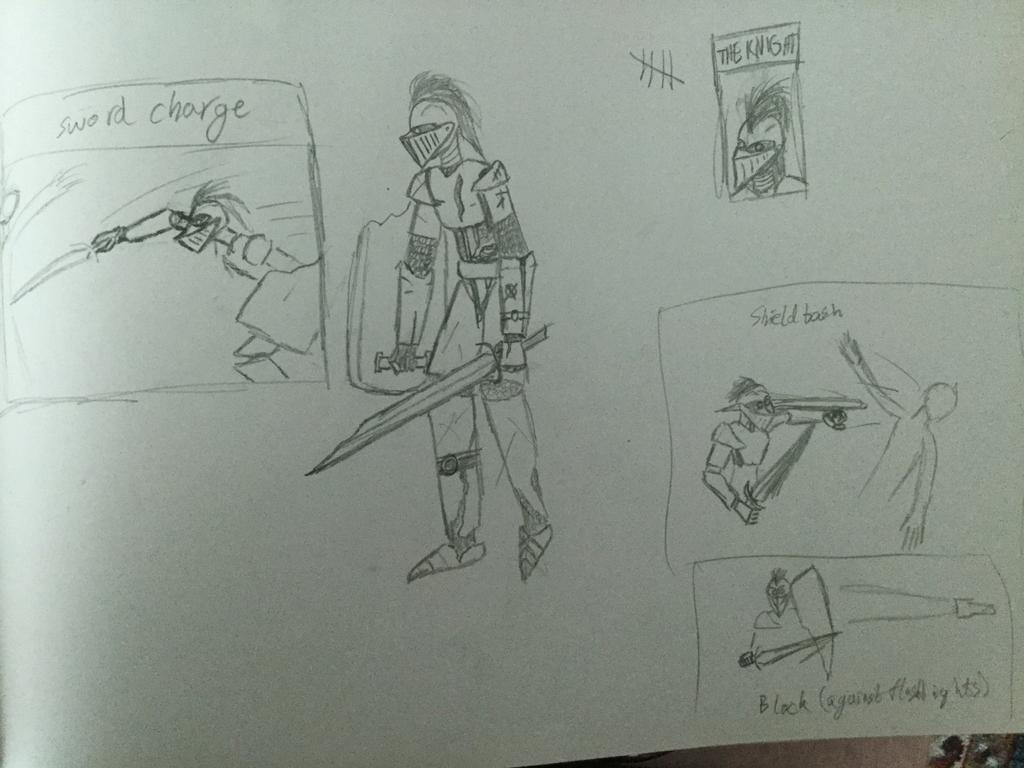 The Knight was a zealot in his time, and fought in a crusade, as well as many religious conflicts. However, his downfall started during the witch craze. With the burning of an actual witch in the black forest, she cursed him to never be able to rest, to always carry his anger of those different to his beliefs.

When the times began to change, he did not. He started to kill those who proclaimed "blasphemies", those who he considered Heretics. The people tried to kill the crazed knight, but he just wouldn't die.

Now, he rots in the world of the entity, and all who enter are Heretics to him. He'd rather burn them, but the hooks will have to do. They'll suffer all the same.

Secondary attack: Shield bash. As depicted in the relevant image, he'll bash them with the shield and they will fall down dazed. In that short amount of time, the knight has a chance to pick them up, but he has to take a moment to reset (similar to how the Nurse has to cough after teleporting, but not the same thing), and the daze effect only lasts for a few moments.

Tertiary attack: A Charge attack. This has noticeably less range than the Hillbilly's Chainsaw move set, but it has the same effect. When he does this, he shouts "Heresy" in Latin/German.

Passive: if a flashlight is shined on him, he will stop and block it with his shield, and block it as long as the light shines on him. When it stops, he will reset to default.

Second passive is the effect of the daze. The immediate effects are the falling over, but the secondary effects are hud interference for 30 seconds.

Third passive is pallets. Usually they stop a killer in their tracks, but the knight (since he is wearing armor) has the effect muted. The pallet will smash over him, dazing him for a few seconds. The pallet will immediately break. This forces survivors to know the best time to use pallets, as well as use windows more.

One of the more brutal ones, does a shield bash after the survivor tries to get up. Then pierces them with the broken sword, lifts them up, then viciously throws them away quickly.

To Stop Heresy: For every time you hook a survivor, your determination to stop them all is intensified. You will gain a token for each hooked survivor, which will increase your movement speed by 15%. This does not apply to actions such as breaking generators/pallets or going through windows.

Deus Vult: Missing a survivor fills you with holy rage. For each token, your cooldowns for perks and abilities is decreased by 15%. At the maximum, 5 tokens, all survivors are exposed until one is hit, which spends all tokens.

Holy Fire: All fire pits reveal survivors' auras within a certain radius, and flashlights spend more charge for its' use.

Lore: An author by trade, he found his talent at an early age... although one more focused on the macabre. During his breaks from college, he would travel to sources for information. He went missing on his second trip, to the northern castles of Germany...

Idle animation (in loading screen): Writes in his book for two pages, closes the book, and looks around. Repeats.

Intuition: You understand that sometimes, other things are important and must be done first. An object will be highlighted with a white aura to you. Completing the relevant action (searching for a chest, cleansing for a totem, etc.) will give you a 10/15/20% increase in all actions for 30 seconds.

Author's Notes: When you understand what you're doing, you realize that you are capable of spreading the knowledge you gain. Allows you to write "journal entries" for other survivors. Every time you complete an action, you gain a token. When you press the action button, you will spend all to write down a journal entry for another.

Writer's Block: You understand that time is on your side, but wasting the killer's isn't in their best interest. Every time you go into a locker during a chase or end a chase early, you gain a token. At 3, you can read auras in lockers, at 5, you can see other survivors at any range, at 8, you can see the killer's aura. You lose one token when hit by the killer.

I would like some feedback for this, especially the survivor perks.