In my opinion, I honestly see this as very...Lazy..? Now, don’t get me wrong, the last Hallowed Blight was awful in the sense that you had to focus on doing an objective that did not help your team at all. For Killers, it was the same old song and dance: Just hook Survivors. And, now, it’s the same as the BBQ event and other previous events: Just do gens/Just hook Survivors, lol.

I really think these changes are...Boring, lackluster, and encourage the gen rush problem that is rampant in the game. I really think this Hallowed Blight should focus on redoing what this year’s Chinese New Years did, which was, obtaining an item on the map. I found this feature to be amazing, especially with how it rewarded players. Survivors got rewarded for glowing and sticking out while trying to acquire more bloodpoints and a token, while Killers had to manage taking care of the items to acquire their tokens by finding the players who have the item in their person. But, hey, that’s just me, what do you guys think?

Feels like another rewash of old events and it feels like the devs want it to be ‘exciting’ and ‘drawing in players to continue playing’, but it’ll only just be another ‘oh, cool, I get to hold M1/hook Survivors again’ simulator imo. 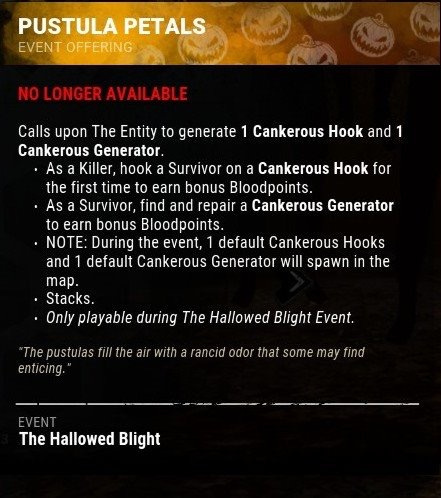