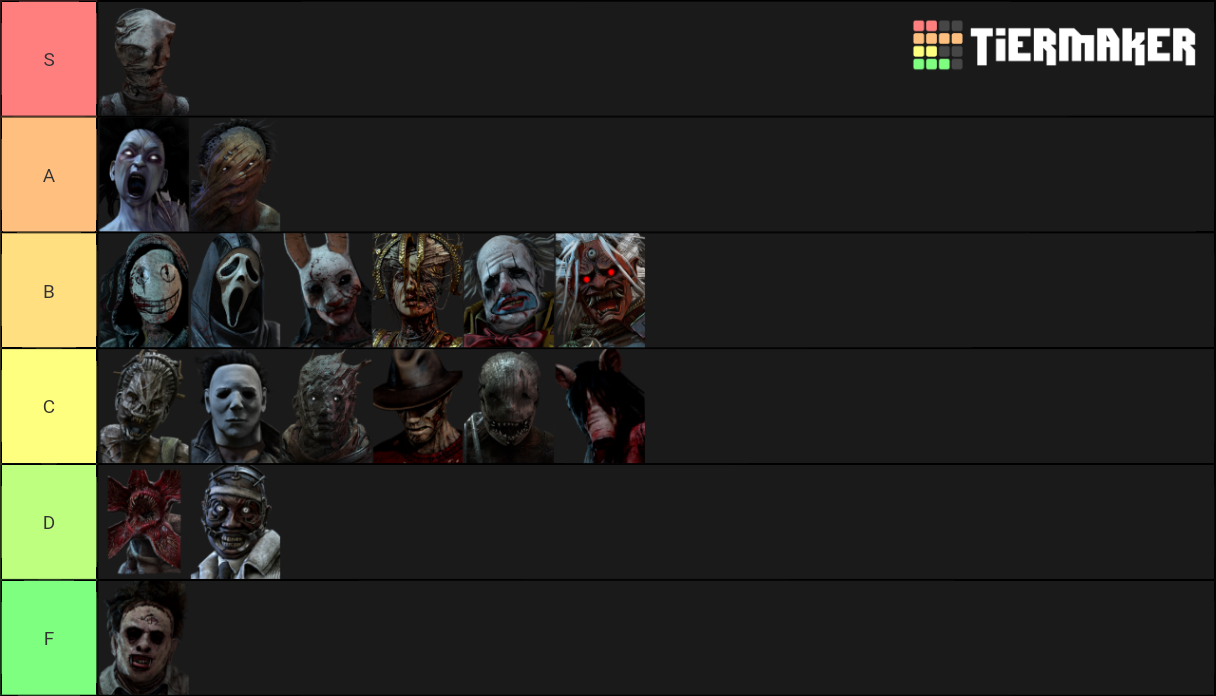 S - Nurse. Even post rework she can be used at godlike abilities and end games in seconds. Just takes a lot more practice to get her ability to godly levels.

A - Spirit: Even with her changes, she still holds a lot of power for mindgames and closing distances fast with her phase.

Billy: He will continue to sit at A tier for a long time. The one hit down chainsaw combined with the usefulness of the mobility makes him a great killer with the practice of hitting those chainsaws.

B - Legion: Practically a standard M1 killer who can fast vault and close distances with the Frenzy. Not top tier, but if played right can even take strong swf to their knees.

Ghostface: A stealthy M1 killer. If you play his power right, the mindgames without a red stain and crouch ability become your strongest allies. Combine that with the possibility of an instadown makes him not too shabby.

Huntress: B for Busted here. Hitboxes are borked but that just makes her go up a tier as the hitboxes make misses turn into hits with her hatchets. Just throw, the hitbox might work for you.

Plag: Yes the Plag is B tier. The options are playing with No Mither where Iron Will doesn't even work, or to cleanse and give the chace for a good Plag to double-tap you with the vomit. Yes. That is still busted and possible.

Clown: Could have been an A for annoying. But he is really just another M1 master who has a chance for an instadown and smoke that just gets downright annoying since a visual update made the smoke almost impossible to see through.

Oni: Yeah, a B tier. Played right, he will force healing which stops gen progress at the risk of giving him better mobility than Billy (as he doesn't even get peanalized for bumping into things) and the chance of being one-shot.

C - Hag: she has a lot of potential with specific builds, but addon specific power determines the difference between C and B tier for me. Not bad, but a flashlight revokes her power.

Michael: Another addon reliant strength. Perma tier 3, tier 3 tombstone, spooky myers. They are great and fun, but at his base on his own, he just lacks true power without his addons.

Wraith: Addon reliancy again. Windstorm and uncloak, sneaky Wraith, they each have their advantages, but on his own, he is just lackluster.

Freddy: Could be a D tier since the nerf to his slowdown addons, but still a C as his gen teleportation allows for quick and easy finding of another survivor when using BBQ. Fake pallets are easily outplayed, and the puddles are a little broken as you can trigger them and only get one slow down unlike the clown's smoke when active.

Trapper: Bloody Coil and Iri Stone make him fun, but the lack of map pressure as you have to take time to collect and place traps hinder him. He needs a rework next, he needs some love.

Pig: Since EGC came around, her traps took a nerf. Stealthy but slow, but paired very well with her wallhack addon. Addon reliancy determines tier to me, sorry.

D - Demogorgon: You have the chance to be good. But the lack of being able to recycle your portals and a lunge that is easy to dodge take you down the ranks. You do have a nice way to break pallets, but you lack the ability to mindgame it as well as Billy

Doctor: I hate to put him here, but unless you have distressing and unnerving presence you won't be doing too much damage. Tier 3 is busted in that you can still open gates, and I can only hope the rework treats him well.

F - Bubba: Insidious camping is fun, but he is a 4.6 movement speed, M1 killer who has the potential to get instadowns if lucky. The charge time and ease of rage (his hitbox for him bumping off of items is a little broken) make you go down to the bottom. You lack the ability to fake your saw at pallets as you suffer a major cooldown, and your saw's charge time paired with the slowdown of charging it make you easy to avoid.

This is my opinion with the most fair assesment I can give the killers and their powers. And yes, it is perfectly balanced as all things should be.