Now you may have always wanted to play Hag but was worried you would be labeled a camper. Worry not. Follow my detailed steps and legally no one can call you a camper. This will teach you how to bring those survivors to your home to stay for their entire life.

Hag is a slow slow girl, she cant take on a good survivor in a fair fight. However she has traps which can easily give her the maneuverability she lacks.

This is an optimal Add-on and Perk setup. 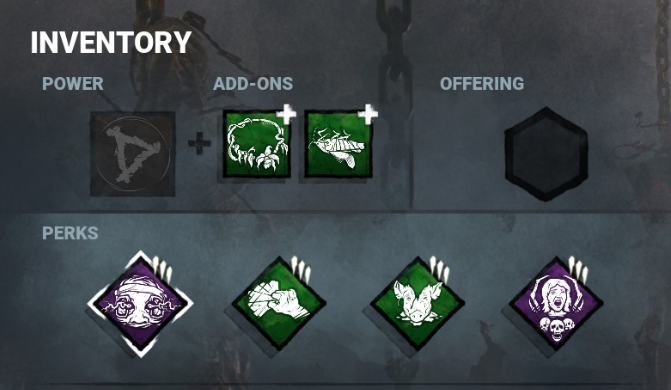 Monitor & Abuse: Helps you get the first hit on a survivor before anyone is in the basement

Iron Grasp: Allows you to carry survivors more easily to the basement.

Sloppy Butcher: Easier to down someone if they don't want to heal.

Save The Best For Last: Resets your left click (hit) much faster then normal

Add-ons: Any will do, however best would be Teleportation Distance and Trap Setting Time.

Step 1. Find your home! You need to know where basement is located. Most of the time its in Killer Shack.

Step 2. Find your first guest (any survivor will do). You can place traps at random as you patrol the gens, you just need to get 1 down to start the snowball.

Once you have acquired you first house guest. This is your zone of control. 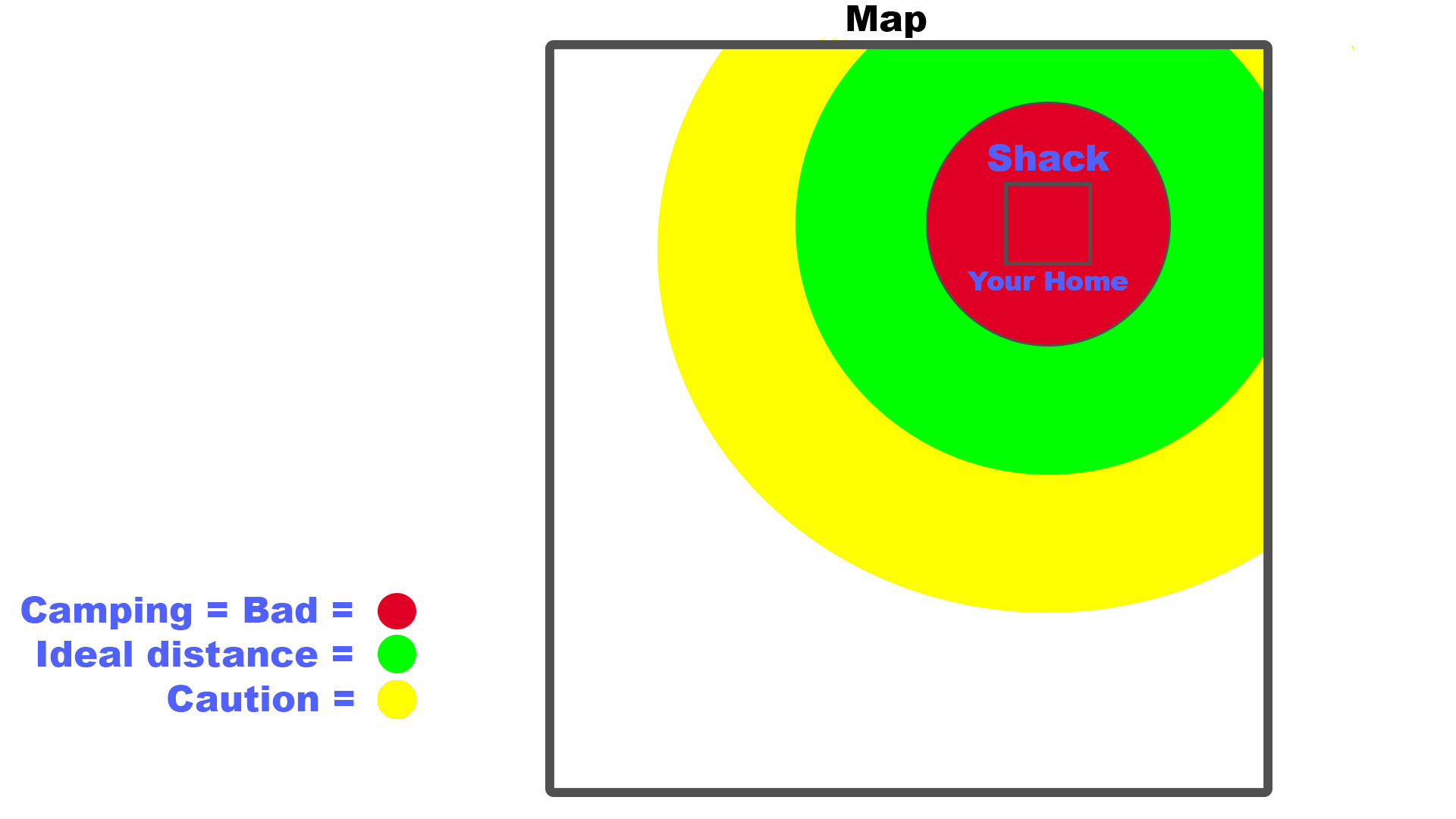 Stay out of the red, that's camping, we don't camp here. Patrol all gens that fall within a green range (easy trap teleportation) You should be able to have a 3 gen in there as long as the entity is not bullying you.

However if map generation is not on your side, you will have to push out to the yellow zone to defend your gens. Which is fine. We build a setup at the shack to give you enough time to run back into the green zone to teleport home.

This is the overall setup you will want. All greens mandatory if you want to hold that basement, yellows, if you have time but you don't need them all. 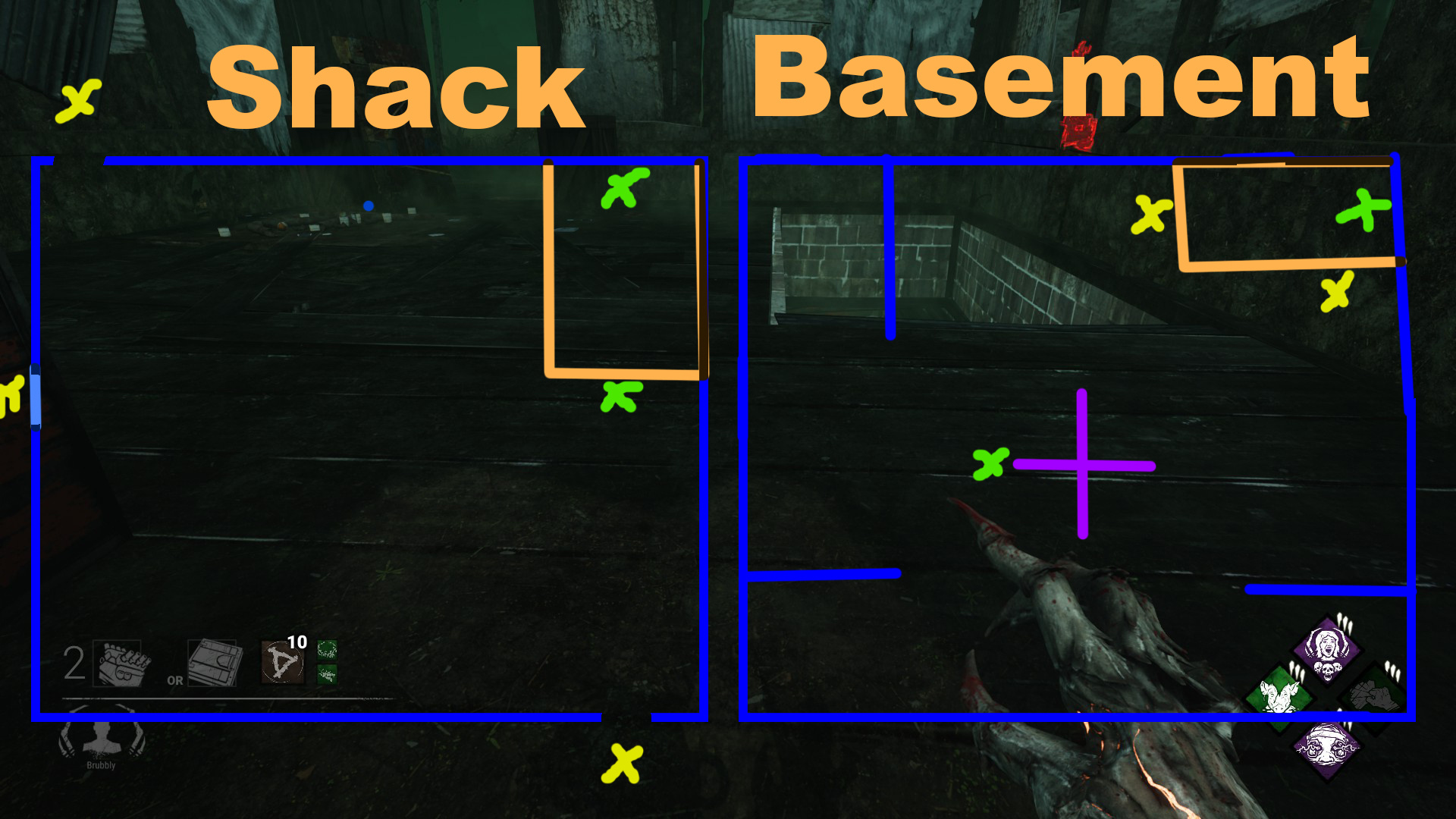 We don't care about hiding the fact we have setup a lot of traps in the shack, Survivors can crawl slowly over the traps without popping them. Good. The slower they get to the survivor the more time they waste. And if they don't crawl, also good, just teleport over and add them to your basement collection. 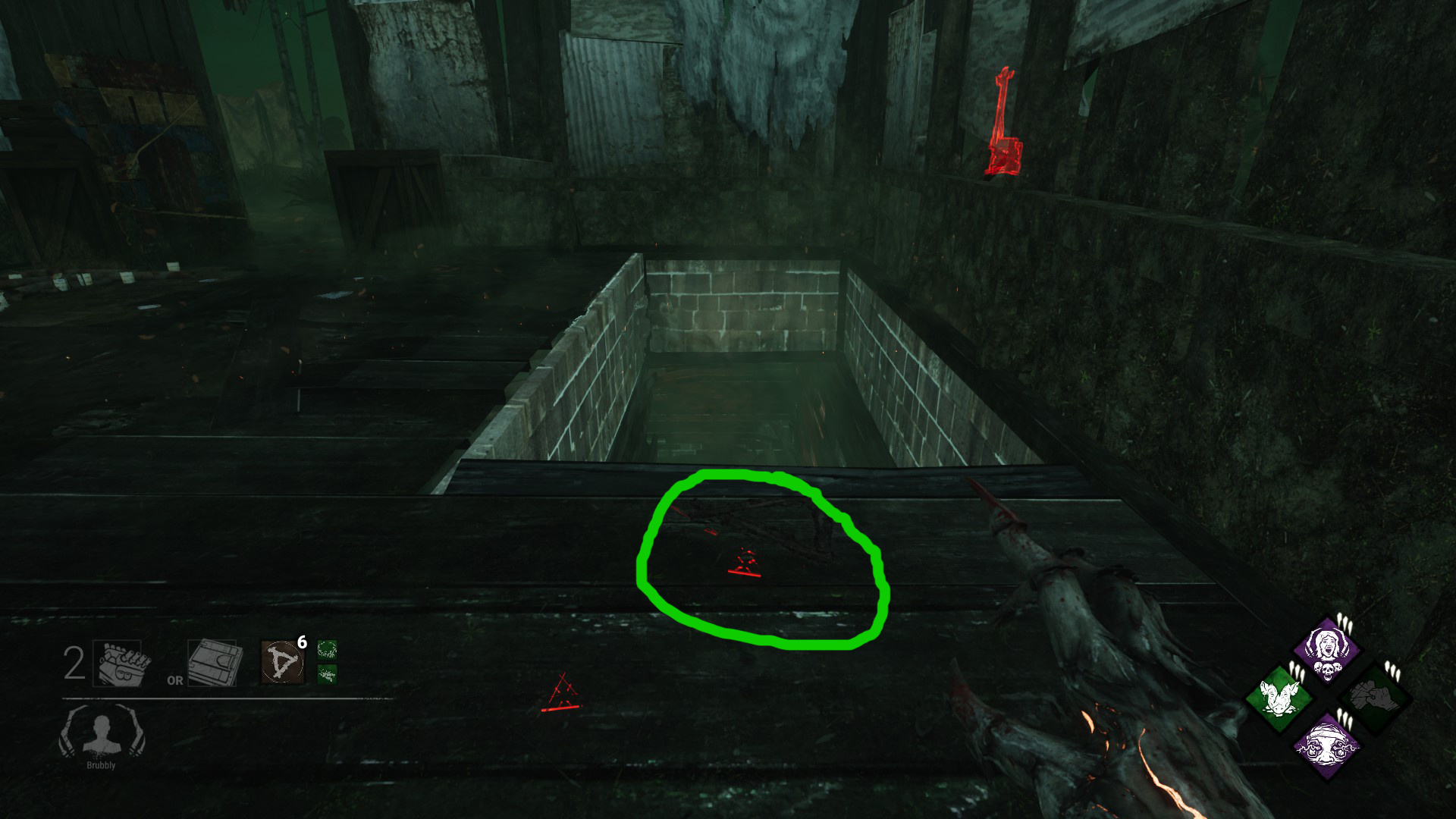 This trap will tell the survivors you have trapped everything or it will scare them and they might run away. 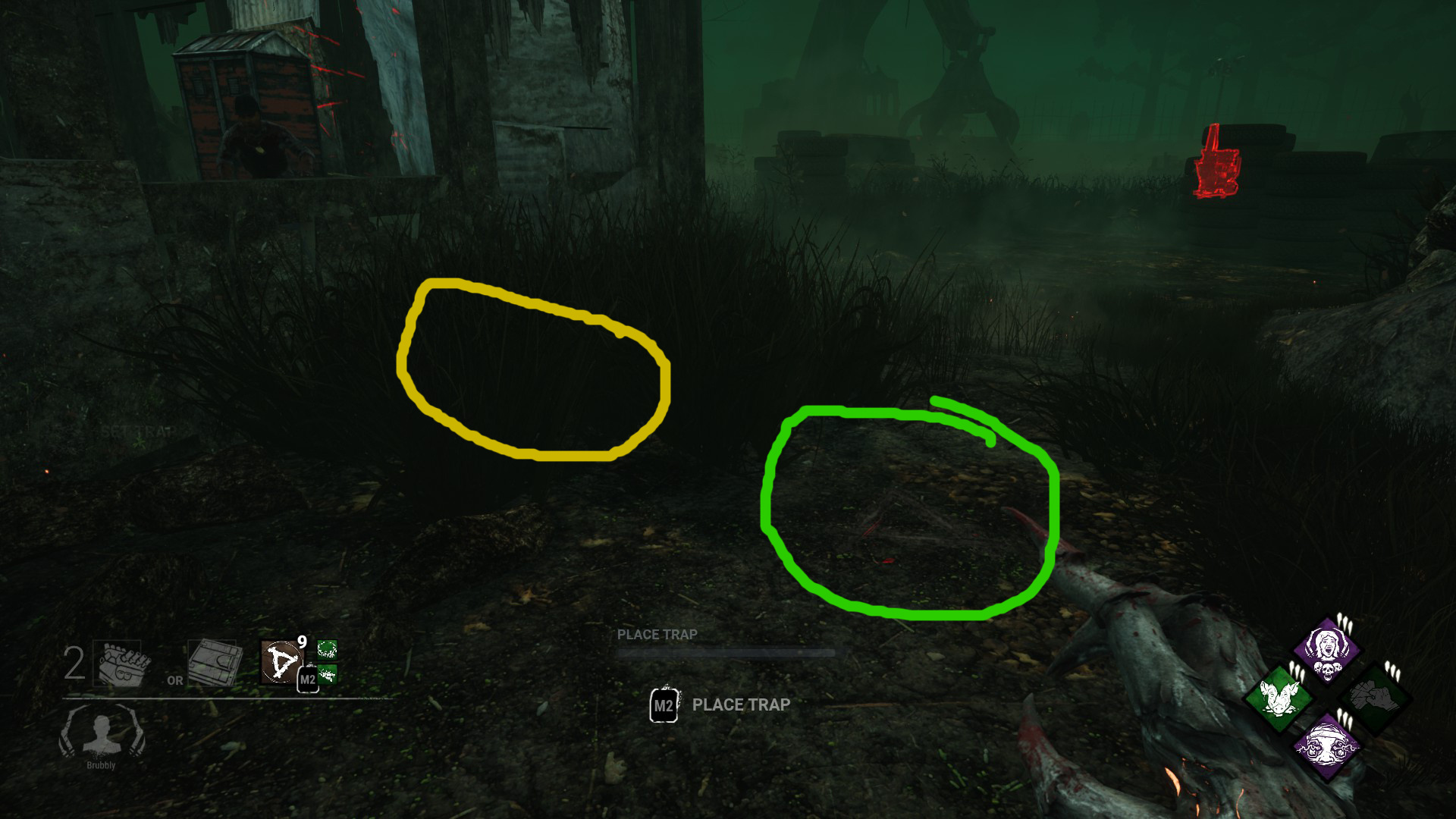 Now this trap for window on shack is optional. However it is very powerful should they manage to save your basement people. You can hide it in the grass house it will pop before they jump the window, which we don't want. You want it further away so it only goes up if they jump the window. 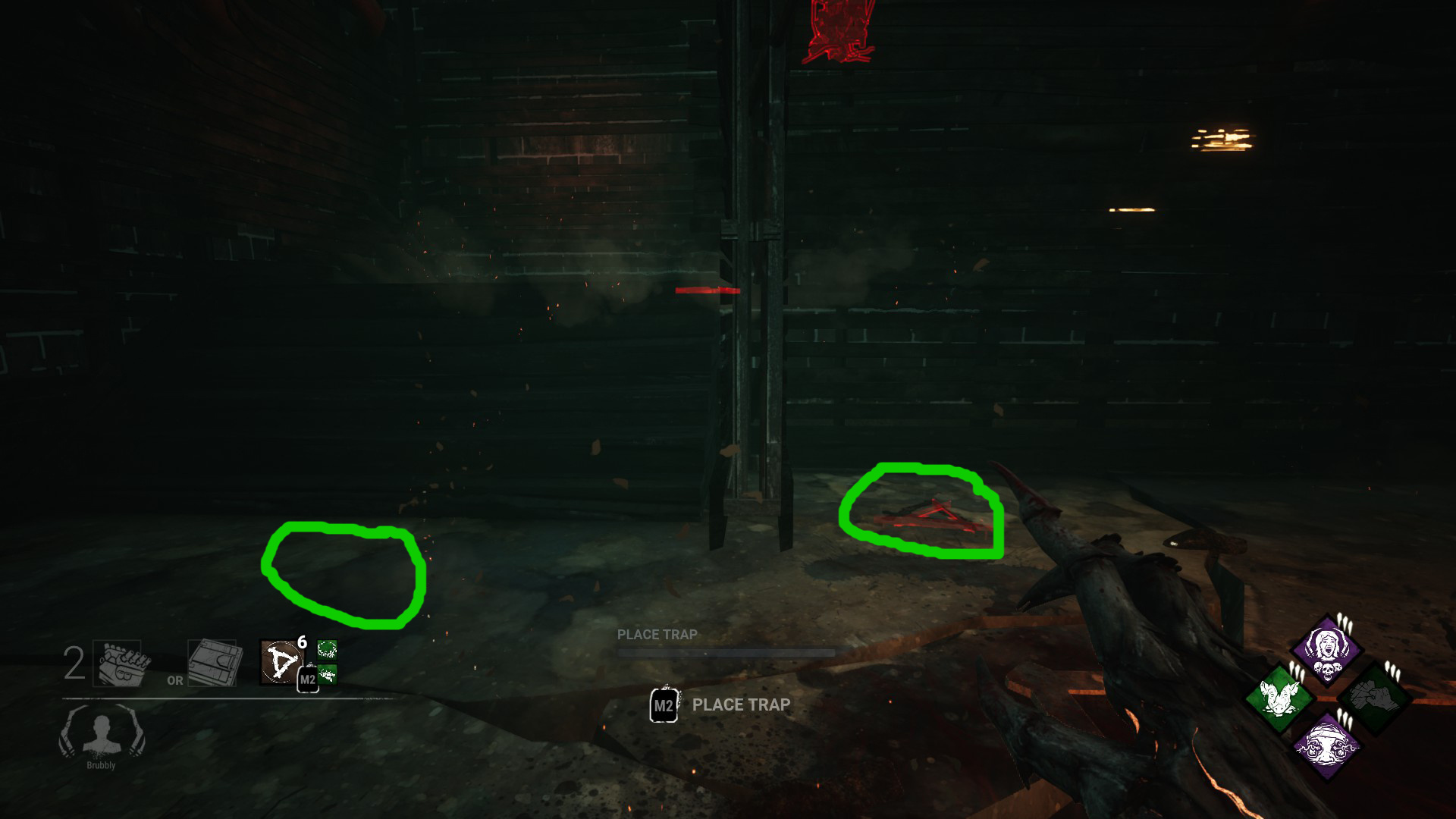 You have your choice between hiding the trap under the stairs, which is sneaky or you can just slap it right inline with the stairs. 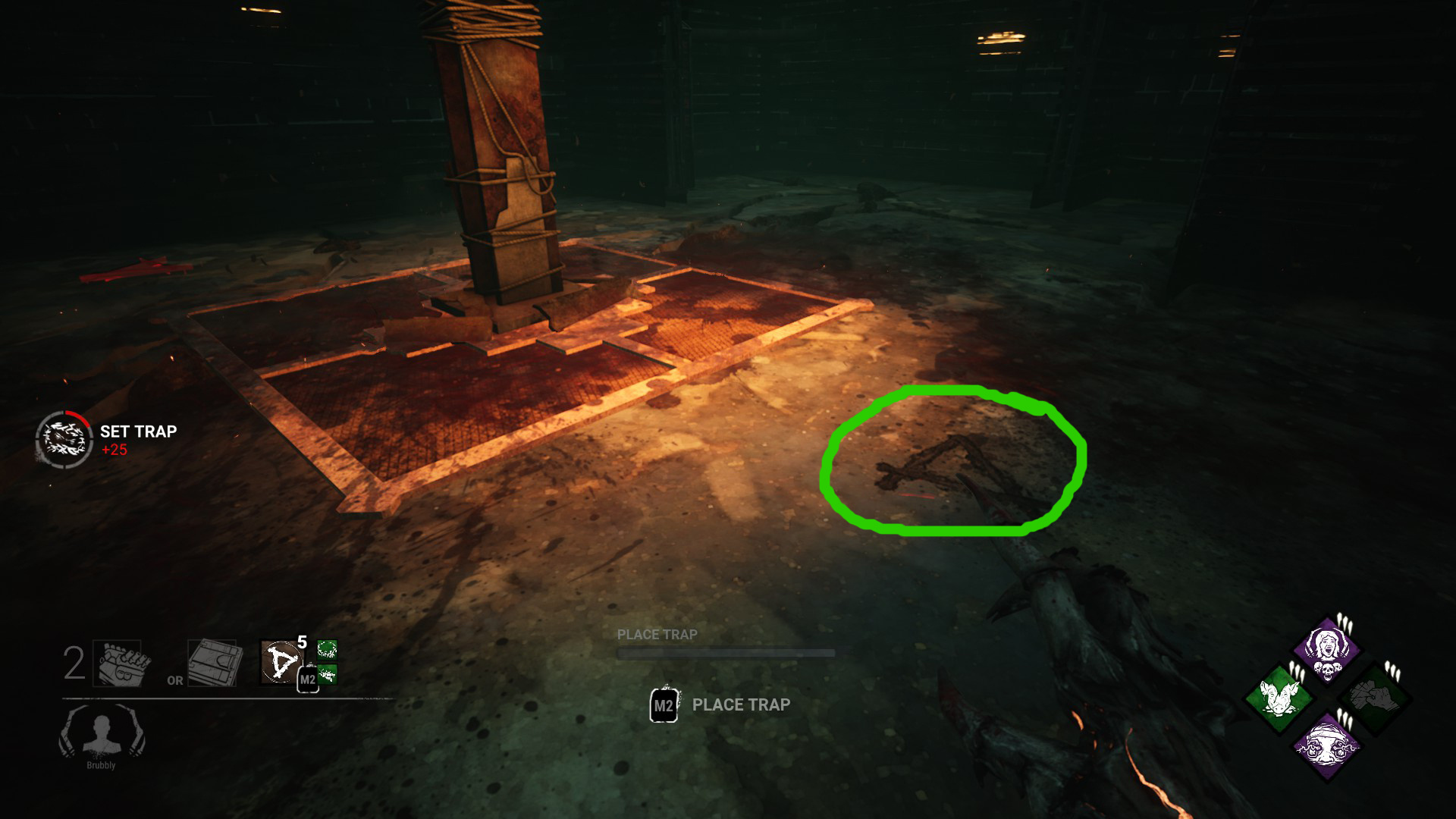 Always, ALWAYS! Put one trap under a hook of your choice where you will put the human. 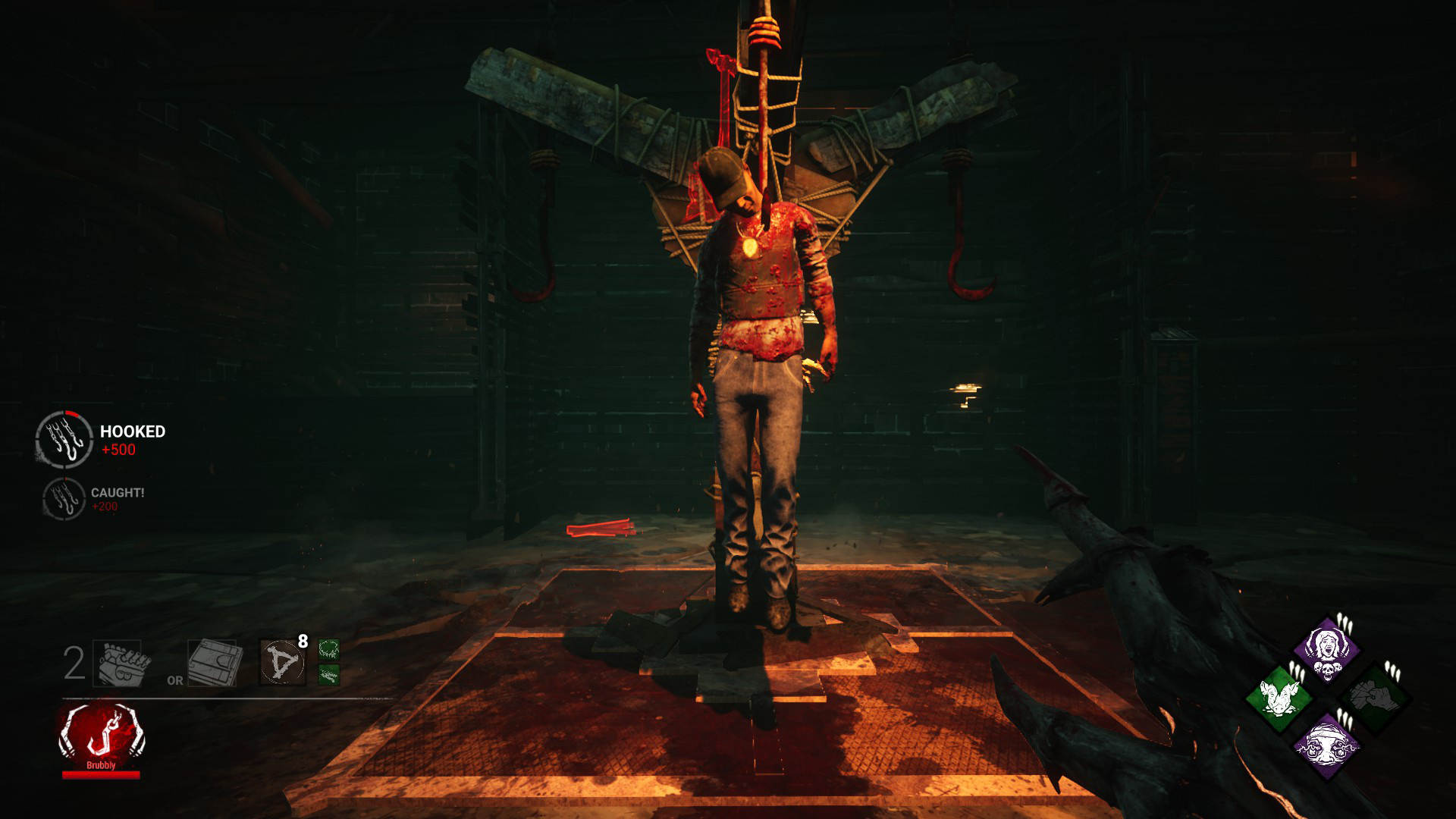 Pop that bad boy on a hook. After you hook for the first time in the basement. That is when you do all your trap setup.

You never ever want to let the basement go without a guest. Be a good host. If they save whomever is down there. You down, any survivor, it does not matter if its the same or a new one. (new one can be preferred)

Just keep the basement occupied. This will keep at least 1 to 4 people not doing gens. Everyone wants to save. Just be ready to teleport home and add to your collection. This build is not for everyone as it can be quite difficult but with a little practice and an open mind, you can achieve greatness!