Would Springtrap work in DBD?

I've seen other posts detailing this, but a lot of them really provide a minimum amount of insight. This is not a post affiliated with franchises, a lot of people argue that the franchise may be a problem, but this is just focusing if Springtrap as a character would work.

I've split this up into three sections:

These detail how he could be added into the game, what changes might have to occur, and specific things that would have to be added or removed in order to have him really fit.

Disclaimer: I'm not too knowledgeable about the FNaF franchise, but I know enough to sort things out. Apologies if certain information is wrong. Keep in mind that I'm not an avid fan of both franchises and really only know a sustainable amount about FNaF.

This one is not as important.

We've seen even with licensed killers that lore does not play as specific as a role. Some people argue that it does, but that's false in my opinion. Pyramidhead is a manifestation of a person's guilt, and he's added into the game. The Demogorgon is... do I have to explain that one?

Another thing people throw out is that the FNaF lore is too convoluted, vague, etc. However it seems there's a concrete and basic amount of information that would make the lore "work."

Again, I want to stress that the lore part is really not that big of a concern. This is probably down low on a tier list of deciding a character to come into this game.

My idea goes as followed... we know that Springtrap was a child serial killer that lured kids with a friendly mascot costume. This mascot costume doubled as an endoskeleton to perform that could retract as well as a wearable suit, and in a panic as he was cornered by supernatural remains of those he had murdered, he put on the suit and came to a gruesome demise as an endoskeleton of metal and wires were jammed into his body. A supernatural force allowed him to live, and I was thinking instead of events unfolding in the future, that the Entity took him after seeing his iron will to survive by the sheer determination to pursue evil.

"He learned that death was not an escape, but an experience. Agony transformed this already serial killer into a horrific abomination of wires and metal. He should've been dead, but a force allowed him to persist. As the fog enveloped this nightmare of bloodied fabric, an unspoken agreement was made: to test the limits of what others can tolerate while being torn in half."

My example isn't really a good one, but you get the point. You could easily make a short little story to explain why he's in the realm. Even then, this really doesn't matter that much because BHVR has made too many exceptions.

The idea of a rotting corpse visible that is inside of a bloodied mascot suit already plays on multiple fears that other base appearances of killers do not play upon. No other killer really plays upon the fear of mascots or mechanical figures, and furthermore, the capability of having the visible organs beat and show that they work could add a touch of terror.

Of course, being added to DBD would include some retexturing, maybe some base redesigning, and the addition of more realism. However, it's incredibly possible: 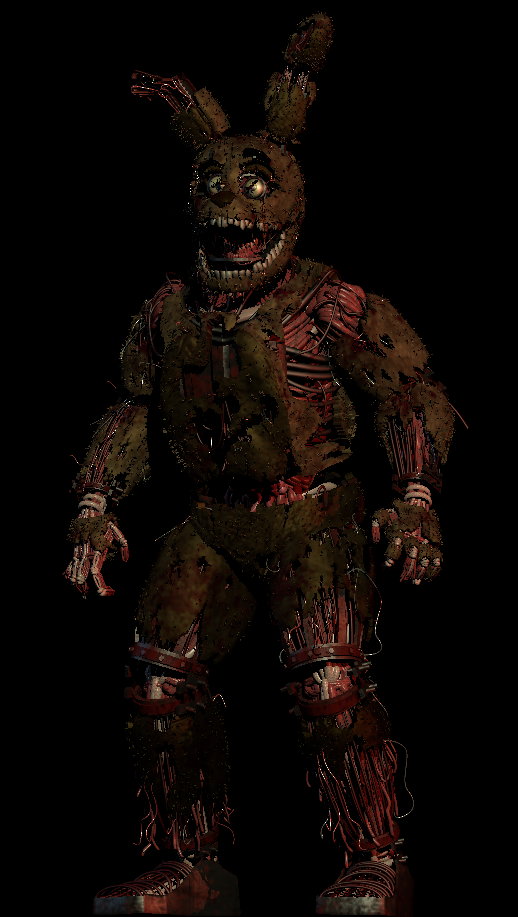 A gruesome sight indeed, and you can already tell there is some malice behind it. The figure alone shows that the passive sounds would be incredibly loud metal clanking, but one that people forget about are the sounds of organs squishing together, flesh being pulled, etc.

This is, in my opinion, disturbing to look at alone. Visible cracked bones, strings of flesh all over the place, etc. I think Springtrap would add a lot of variety to the killers and actually be terrifying by physical presence alone when taking into consideration that there could easily be changes to make him fit into the game more.

I've seen many topics of discussion surrounding FNaF if incorporated into DBD, and this will be a quick section dedicated to saying yes/no to certain ideas and briefly explaining why.

I might add on to this section, so keep an eye out for edits.

I think it's rather interesting that I wrote this, because a bit ago, I was really against this idea as a fan of Dead by Daylight. I'm not delving into the franchise in this, but from what I've seen personally, FNaF seems to be going in a direction right now where it can be taken seriously as a horror franchise (as it is now in collaboration with other studios, etc.) Stranger Things also has the same target demographic as well.

I just think him as a killer would be terrifying, and at this point in time, I don't think it would be like 6 years ago where a flood of young children would swarm DBD because of its addition.

Take that in mind as well as the points I brought up. You are fully allowed to agree or disagree, thank you for taking the time to read!

FINAL VERDICT: He would work if well executed.

I also ask you, if you disagree, to not deny the work I put into typing this whole thing out. Please be respectful of everyone's opinions and reasoning (unless if it's insane), as you're allowed to have your own as well.