Is Hex: Blood Favor good enough to be a Hex perk?

For a Hex perk, its strength is fairly low. 16 m isn't really much at all. The survivor is almost able to run 16 m in the time it takes for you to recover from a hit, so they would be out of that range shortly after you have recovered. It also only blocks pallets, so they still have access to windows to stall for the 15 seconds of pallet blocking. The effect is also wasted if you hit an already injured survivor. Its effect seems so minor yet it's a Hex perk, which lets it be cleansed. It could easily get no value in the time in the time it has before it is cleansed. I only see this perk being useful on specific maps where there is an upstairs and downstairs or when there are multiple survivors nearby. 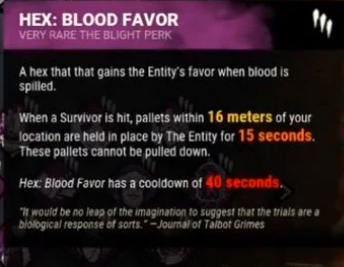