Home› Dead by Daylight Forums› Polls
Have a question for our upcoming Q&A Stream? Head on over to https://forum.deadbydaylight.com/en/categories/q-a-questions . We'll be taking some of the most upvoted questions and answering them on Stream.

HOW EXCITED WOULD YOU BE FOR THIS KILLER/CHAPTER: Marta - Outlast 2

I was participating in another poll when I thought of another great killer I would love to see. Marta would be a great addition to the killers because:

A) Both her appearance and her personality fit with the aesthetic of dbd.

B) She comes from a well-known and loved horror franchise.

C) There are some amazing ideas for a new map such as a sort of cultist village as seen in the game.

D) As a survivor you could play as Lynn Langermann your wife in outlast 2.

I don't think this is very likely to happen due to legal reasons but it's a fun thought to speculate on nonetheless. What are your opinions on the subject?

A picture of Marta from Outlast 2: 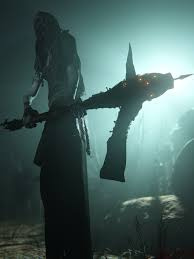 HOW EXCITED WOULD YOU BE FOR THIS KILLER/CHAPTER: Marta - Outlast 2 37 votes

1. I would hate this chapter with a passion
5%

3 votes
6. I would be really excited to see this chapter
10%