I have taken much time to write this thread, so please be smart in your answer... I have played exclusively as a rank 1/2 survivor (soloQ & duoQ only) for the past month so i guess i’m able to give an accurate feedback about the balance of the game. I have 1000+h of gameplay, have been playing the game since end of 2017 and am a really good survivor.

Here is what i can say about the state of the game :

So what can we say about this, globally ?

Also, throughout the years, developpers have brought many changes that remove all survivors options :

I understand that killers were frustrated with the previous state of the game, i agree that there were too many unfair features for them to enjoy playing the game but slowly removing all survivor’s game mechanics to survive is a terrible gameplay choice... I mean, where is the gameplay then ? Doing generators and unhooking ? There are so many situations where you have no option to be able to survive now...

And we can also talk about the perks that negate survivor gameplay mechanics :

etc… i mean, all those perks had sense when there were infinite loops and many pallets on maps with 100% of safe loops. Now that dead zones are everywhere, that there is no more infinite and that 50% of loops are unsafe why are those perks still here ?

A game design that ends up giving 0 option to one side in order to make it easier for the other side is a bad game design, plain and simple. It’s not a question of balance, you are removing elements of gameplay... "Oh crap, they can finish Mario ? Let's make them unable to jump then"... and yes we play games to enjoy the gameplay, not to feel like a moving character that can't do anything anymore.

So what is the result of this state of the game ?

Pretty much what everyone say on this forum :

Survivors are DCing a lot and suiciding a lot aswell. I would say there is a survivor having this kind of behavior in 30% to 50% of the games i have played this month (200+ games). It means that almost half the time survivors are so unhappy about what the game has to offer, they decide that being banned for some time is a better option than playing... Before soloQing, i was always playing in 3Q/SWF so i thought that DCing and suiciding was rare but omg was i wrong...

Anyway, i guess adding a ban system was easier than actually fix the game but it's not like this you will save DbD...

To put some numbers on my feedback, i have done some research. I have found a guy that studied the official stats and made a good document about them in 2018. 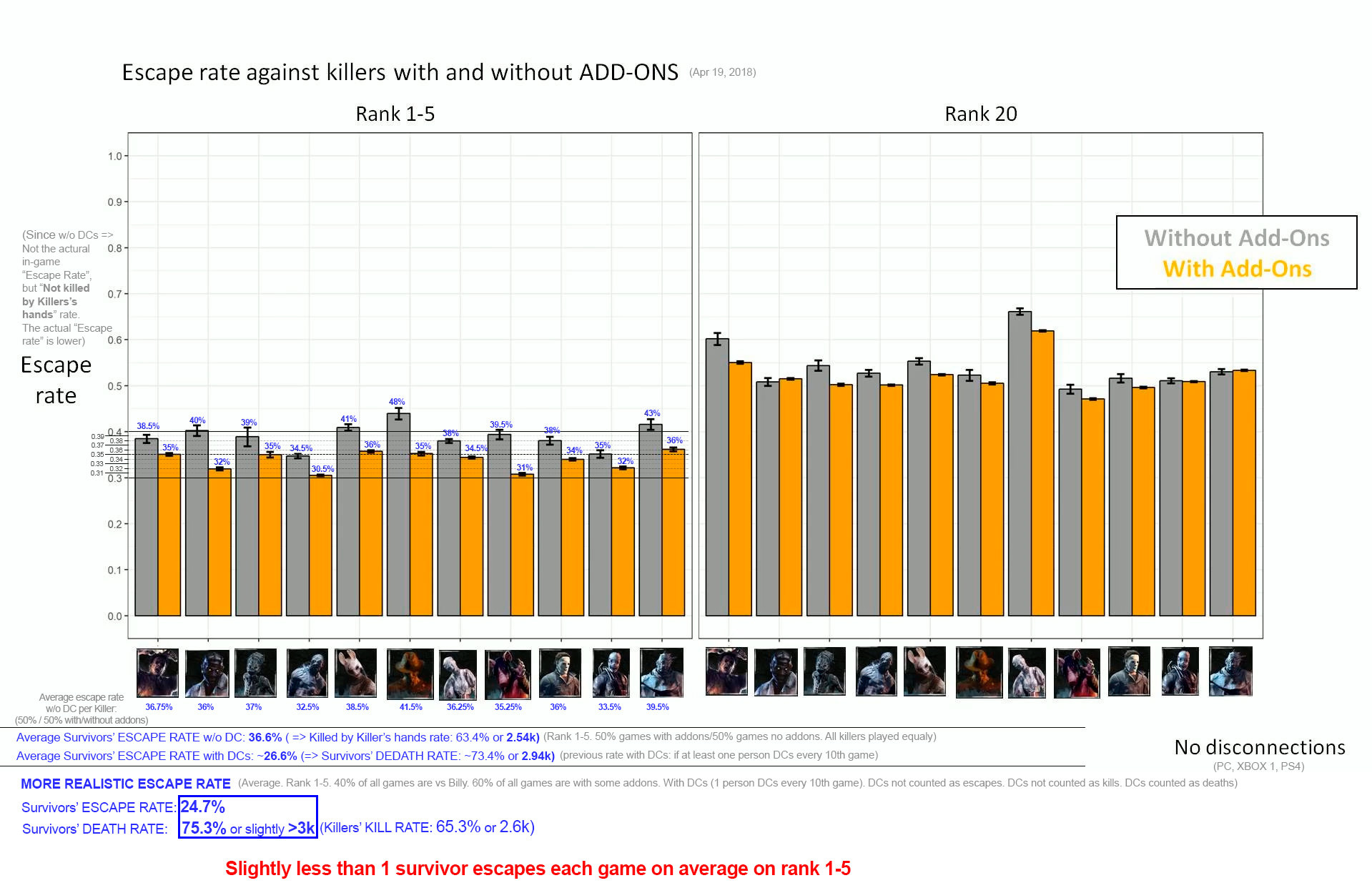 Kill rate was 65% when he had removed DC and suicides (it seems like developpers were giving more detailed stats 2 years ago, we wonder why they now only give partial stats, but i have my idea :)).

Death rate was 75%. At that time, survivors were already suiciding and DCing quite often (as shown with the difference between Death rate and Kill rate). But if the DC/Suicide rate is that high, it means there is a problem with the game ; that’s not natural to abort a game, this behavior is really rare in other games (Valorant, CS Go, R6S, LoL etc...) players will do it only if they feel the game is unfair and broken. The amount fo frustration to push someone to DC is huge...

To my mind, this is this difference in skill that explains the 7% difference, it's in no way due to balance changes developpers have brought to the game...

We arrived to a situation where top 10%/20% killers get a 3K+ 95% of the time without even trying. Many killer mains here have posted threads about how easy the game became for them, that there is no challenge anymore and so they don't play killer anymore as it's boring for them. Some well known streamers have stopped to play killer too while some survivor main streamers have completely stopped to play the game...

I'm wondering till when developpers will wait to actually fix this unbalance problem. They have to do seperate queues for SWF/3Q and SoloQ/2Q with different rules, there is no other way.

I have kept some other bad points for the end of my post. It needs to be fixed but it's not that urgent.

I also know that there are many, many things terrible in this game for killer mains, but i haven’t play killer only for the past months so i don’t have the legitimity to speak about it. I don’t plan to play killer only anytime soon as honestly, playing soloQ survivor has been so frustrating for me, i don’t want to increase it to the point i throw my mouse in my screen to take them both and throw them from the window !

So killer mains (good ones) , feel free to list all the problems you encoutner while playing.

I hope developpers will read this and will decide to fix their game...

Thanks for the time you took to read me.