Home› Discussions› General Discussions
The celebrations continue. 🎇 The Entity has extended the Gilded Stampede event by an extra week. Log in daily to redeem 50,000 Bloodpoints for each extra day until the end of the event on March 4th 11AM EST!
https://deadbydaylight.com/en/news/lunar-new-year-2021

Instead of talking about how much I hate one specific killer, how about I make a tier list of killers and give a quick summary of each one?

Funnily enough this MY OPINION. if you disagree, that's really cool but you don't have to shut me down and call me a rank 21 because of that, because that's not nice.

Also, if you play more hated killers, this is purely based on their kit. Just because you play killers I hate playing against doesn't mean I hate you too. So please don't take anything here personally.

With that out of the way, here's my list. 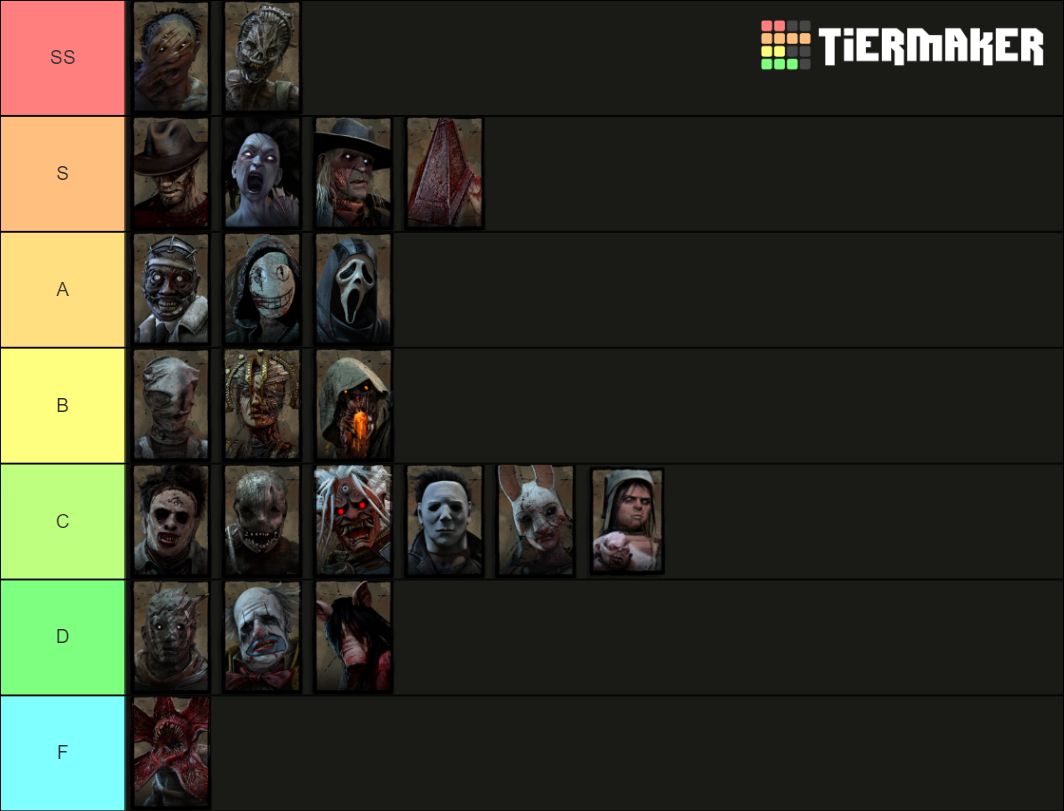 I get facecamped by every Hillbilly I run into. He's mostly here because of that, but he's probably D or C tier in terms of pure kit.

Hag is hag. She's fun to play against in moderation, but once you run into at least 2 of good Hags in one day you start to question why you play Dead By Daylight.

I dislike all of these for the reasons everybody else dislikes them. Everyone knows why Freddy, Spirit, Slinger, and Phead are hated. I think Phead and Slinger are the least annoying of this bunch, but that's only because I typically do well against them.

I only find Doc annoying because EVERY TIME I get shocked by a static blast from halfway across the map Doc is behind me .0005 seconds later. Does Doc have a teleportation ability or something?

Legion is just boring, not much else to it.

I only don't like Ghostface because I am very blind

When It's a bad Nurse, I barely notice that there is in fact a killer in the trial. When It's a good Nurse, I respect them too much to be mad.

I'm honestly more mad at the game than Plague because every time I bring a medkit the game will do anything and everything to ensure I get put into a match with one.

Blight is in B because his name starts with the same letter that the tier is. I literally don't play against enough Blights to rank him properly.

Bubba is mostly fine in my opinion, but the only reason he's in C tier is just that he is super good at camping, which makes me mad because sure, being facecamped is boring, but it's also a very unhealthy playstyle to default to and I'm worried about newer players that decide to main him.

The only bad thing about Trapper is when you get caught in the most discreet, random corner of the map.

Oni's actually very fun to play against except for the fact that you are pretty much guaranteed to be slugged. That's not a reason to hate him, after all he pretty much has to slug or blood fury goes bye bye. So obviously I see why Onis slug and I don't get mad about it when it happens. Doesn't change the fact that worming around isn't exactly a blast.

When I'm just playing for fun, Michael is great! But when I'm trying to keep my rank or get to a higher one, a Michael match in solo queue can be kind of a bum. SWFs destroy him, but when I'm sweating in solo he's not a face I want to see.

The second I let my guard down a Hatchet descends from the heavens and finds itself nicely placed in the back of my head. Probably confirmation bias, but it feels like it happens every game and that's why Huntress is here.

Victor is usually easy to stomp, but when you get a really good Twins player it's an absolute nightmare.

Wraith is really only where he is because of two things: the first being that he doesn't have any annoying attributes (other than facecamping) but if you have an SWF he causes no problems. The second is how unpredictable he is. You might argue that by this logic I'd think Spirit is good as well, but unlike Wraith, Spirit is a chase killer. That's a whole different ballpark.

I like Clown because similar to Doctor, he's trapped in the realm of a malevolent soul eating dimension, but still finds his work absolutely hilarious. Anyway, he's cool because I can get away with doing gens and hitting skill checks, the one thing I'm good at in this game.

Piggy is fun because having a trap on makes the game more exciting. Survivor is kinda boring and Pig helps it not be that way, one trap at a time.

The best of the best is Demo. Not only because of his character, but also because when he starts to shred things get a lot more interesting. Pulling off a dodge on the shred is really satisfying and rewarding, but Demo landing the shred will be incredibly rewarding for them. It's the classic western standoff. I also like how his position on the map is unpredictable because of the portals. It keeps you on your toes. He's a mix of the short term excitement that Piggy provides, and the unpredictable nature of Wraith, although the latter is very limited. It's still there and that's the important thing.