'How Much Fun To Face' Tierlist 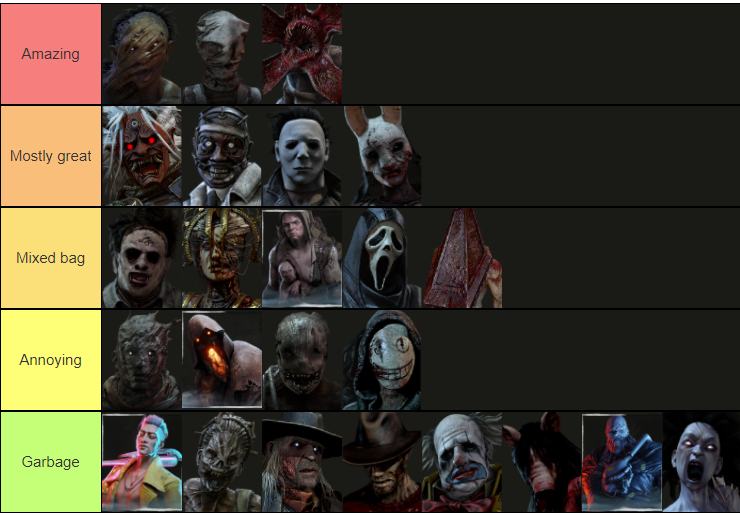 Don't have much to say about the ones in amazing/mostly great, they're just fun to play against.

Leatherface: Reasonably fun chase mechanic, that allows for interesting play from both side. Only reason he's not higher is the ability to easily face camp, as well as bamboozle making him far less fun to face, as the biggest counter play is removed. That encourages holding w and only using pallets, which is meh.

Twins: Might be controversial to have them high, but I think the twins are quite fun, when they aren't slugging constantly that is. I completely get they aren't very good without slugging, but it's not the most enjoyable to be lying on the floor for half the game.

Ghost face: Stealth killers are annoying most of the time, and his reveal mechanic is complete garbage. With that said, I'm higher on normal chase killers now, because of how many 'respect the pallet and get a hit' killers there are right now.

Wraith: I think his rework was extremely lazy. I really wish they gave him a reason to stay uncloaked, rather than just buff his numbers. He's just frustrating, and he's sooooo common to face, that it gets old fast.

Blight: On his own, he's probably in the 'mostly great' category. Holding him back is every Blight using the same perks and add ons, that make him extremely repetitive to face. This is made worse by the fact that like Wraith, you will constantly be facing him, much more than the more enjoyable killers.

Trapper: I really don't like looking at the ground.

Legion: Mending is awful, boring power, boring design, just bleh. Saved from the terrible tier by the fact that you get max boldness every match against them.

Trickster: You either loop him for eternity, or get downed extremely fast, depending on the loop. There is hardly any interaction in chase, other than running him around in a circle. Amazing camper too, which is lame.

Hag: Same as Trapper but even worse, because crouching is so painfully slow!

Deathslinger: He can injure almost as easily as Legion (although only in the 1v1, not 1v4), and his power is still really good against injured survivors too. His terror radius is really annoying, and he's essentially just boring Huntress that takes far less skill.

Freddy: Irredeemable, there is nothing fun about Freddy. Everyone knows why.

Clown: Yay, I have to insta drop pallets or get hit, so much fun...

Pig: I despise Pig, she's so poorly designed. The bear traps are an awful mechanic, as they're the same as gens, but you have to constantly go cross map. She literally has add on combinations that make it impossible to search every box, and way too many Pig's take a Midwich offering which is my least favourite map. They also seem to tunnel far more than most killers, which is really odd, as why would you bother putting a trap on someone you're going to tunnel? Hate her, so boring.

Nemesis: For a while, he was the worst, but at least he's not as frustrating as the bottom killer. His power is literally just a less enjoyable version of PH's. The zombies seemed cool when they were revealed, but they are nothing more than a nuisance, constantly making you have to move to heal, run them away from gens, etc. Zombies + ruin on a small map is just... awful. The vaccine animation is lazy. Possibly the most likely to be toxic of any of the killers.

Spirit: Just a reminder that Billy was chosen to be nerfed, over Spirit. I cannot stand Spirit at all, as you are doomed as soon as you get injured, if you don't have Iron Will, and I don't like running all meta perks so. Disgustingly strong add ons, egregiously easy to play, which allows for some killers to be at red ranks, when they absolutely should not be. Hardly anything you can do against her, it's just a guessing game, but not in a way where there is any room to mindgame, or an even guessing game, as Spirit always has a massive advantage over the survivor. Just ######### spirit quite frankly.