When a game normally ends, Hillbilly does his job, slashing some survivors, everything is normal. We don't mind here about the game itself, but about scoreboard screen. When some people decide to be toxic against killer, survivors or both, it happens. But please, PLEASE, don't talk about suicide like this just for a game, you can really hurt someone with this kind of reaction. 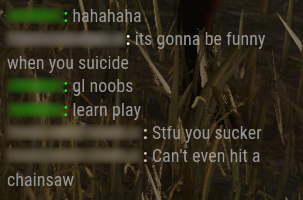 Please Behaviour, don't let this kind player without punishment. Of course I have the uncensored screenshot stored, just in case.