A bit of backstory, I recently bought Metroid Dread and have been absolutely loving it, the aspect of the game I love (and hate) the most is the reason why “Dread” is the game’s subtitle, the E.M.M.Is (side note, there are spoilers for Metroid Dread, I haven’t played much of it yet, but I will be spoiling the first 20 or so minutes of the game, don’t read if you wish to avoid them) 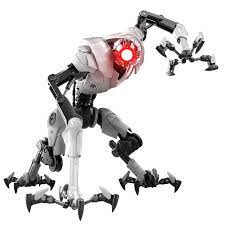 A hulking robotic frame covered in plates made from a nearly indestructible metal, designed to hunt you down and make you fear for your life as you navigate their zones, I love them because they massively ramp up the stakes and tension, they look great and it is satisfying to not only outrun them and escape but to also shoot them in the face when you finally manage to locate their controlling brain thing and get the Omega Beam, a temporary upgrade that lets you melt away their amour before blasting their face away, I also hate them because I like sleeping, and I will probably not be able to for some time because OH MY GOD THESE THINGS ARE ######### TERRIFYING

just imagine for a second, if you will, being in my shoes, you have just bought the game, you have only watched the trailer, you barely have any knowledge of the game let alone what the E.M.M.Is are, you walk into a area and get a cutscene that introduces you to them, before getting cornered and pinned down as one of the most stress-inducing themes you have ever heard is playing, you get the E.M.M.I counter tutorial and learn how to slide under them as you are currently screaming like a girl and shouting several profanities, you then get a bit of relief, as the E.M.M.I is slow and can’t climb due to a broken arm, you enter the next room, find a dead creature, get the Omega Beam from it's body, learn how to use it, and then go back to the room with the damaged E.M.M.I

it starts at the end of the corridor, you charge the Omega Beam, don't realise you need to aim at it's face specifically, then get grabbed by it, mess up the counter and get stabbed through the face, dying instantly, you try again after reloading the save, and kill it successfully, the Omega Beam goes offline, and you continue on your way

Eventually you run into a E.M.M.I zone, the screen goes grey and develops a static layer, and one of the most terrifying ambient tracks ever composed plays in the background

you turn around and leave the area immediately, pause the game, walk around for about 5 minutes or so praying to god that what you just saw and heard isn't real, and then realise that it is real and soldier on, almost dying to a completely different E.M.M.I, one that can climb and is functioning perfectly, meaning it can goddamn HEAR your every move, and simply getting heard by it and realising it's now aware you're there and hunting you down triggers a panic attack that sends you running as far away from it as you can possibly be

i am genuinely impressed at just how far they took the premise, and why i will be making a concept for this absolute gem of a video game monster when i've played through more of the game (i've only got a hour's worth of game time, i want to take all of the different E.M.M.I's abilities and different forms into account when making the concept, so yeah, keep a eye out for it sometime)