Grim Embrace: the weird addition to the anti camping/tunneling setup

tl;dr: if Grim embrace would get a buff, the perk could actually be really cool for both sides.

So, in case you've forgotten, with the release of Artist Grim Embrace was added into the game: 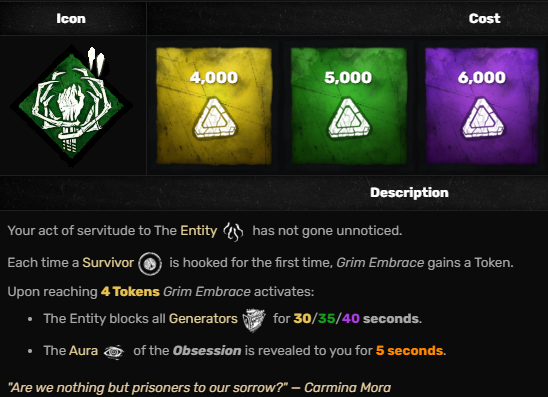 I'm not sure if you've ever played against it at all, I personally never saw it against me as a survivor (to be fair, I mostly play killer), but I've decided to use it consistently in the last couple of weeks. I wanted to share my experience with the perk and why I think the powerlevel of the perk is underwhelming, but also its design seems a little bit odd compared to other, more popular perks.

The most effective strategy by far as a killer right now, to focus on one or at best two survivors and focus on them to kill them as early as possible. I am personally not against this strat, since it does test teamplay, as healthy survivors without hooks have to bodyblock the killer and take hits to protect their teammates, but many survivors do not enjoy playing against it. There is also the problem of proxycamping and facecamping, which can be effective, especially if the survivors do make a mistake (like someone going down next to a hooked survivor). This playstyle I find boring to play as and to play against. Either way, we are all on these forums, and we can all see many people are not happy about it.

What if, instead of changing the game at it's core (which would probably require MAJOR reworks), BHVR could add powerful killer perks that focus on focusing on all the survivors at the same time? I think this could create a different meta for killers. We already have BBQ, but that only rewards you with Bloodpoints if you focus on different players, however, No Way Out is a great perk (I would rate it Tier 2), with a great design and powerful bonus.

What about Grim Embrace...? But first, we have to talk about...

Deadlock is a strong perk (I would rate it at Tier 2). I really like Deadlock, because I can use it instead of Ruin+Undying, or Ruin+Pop and fit in some other weird perks to try out. Why is deadlock so powerful? Because you have to do 0 investment to make it work. Literally, 0 second investment and you have guaranteed gen slowdown that activates 4 times, gives you sufficient information about gen progress and extremely hard and risky to counter by the survivors (only counter being survivors doing 1 gen at a time. It's risky because this way the killer can disturb multiple survivors).

If you think about it, Deadlock is a lot like NOED. You don't need to do anything for it to deliver a strong effect that is hard to counter by the survivors. And this is why deadlock is actually great for facecamping and tips the balance. Earlier I believe if all survivors immediately jumped on gens against a facecamping Bubba, they could outgenrush him, but with deadlock, it seems like it's impossible at the moment.

Despite me liking Deadlock, I have to admit, and it's badly designed. Check Pop, Scourge Hook: Pain Resonance: No way Out. All perks that reward you for doing well. Even Ruin only starts its job, if you harass the survivors from the gen.

The first problem of Grim Embrace is evident: you have to hook 4 different survivors to block off the generators. In high MMR this is not going to happen a lot of times, since the gens many times will be done before you hook the last survivor, meaning you are on a timer to complete your little quest, but the quest actually involves handicapping yourself. If you really trying to make the perk work, you will often not have anyone dead on-hook when the last gen pops, thus it's just not strong enough.

Also, the reward of your quest doesn't actually seem that good. 40 seconds of blocking all the gens? Sound good! Well, they will stealth it out many times, which often actually makes you have to facecamp the survivor you've just hooked, because you have nothing else to do.

To solve this issue, you see the aura of your obsession for 5 seconds. Needless to say, if the last survivor you've hooked is the obsession, F. Even if you actively try to avoid it, this will still happen a decent amount of times. Also 5 seconds many times is just not enough at all. Many maps are just too large to benefit from it and the obsession will hide until you are there (To be fair, they think they are hiding from BBQ and Chili). There is no reason for them not to hide since all the gens are blocked.

To make the perk viable I feel like making those 40 seconds longer would just make it a more boring perk, and it wouldn't actually solve its issues, in fact, could make it worse (camping the 4th hooked survivor is more viable than ever).

I think a change like this could make this perk a really great anti-tunneling and anti-camping perk in the game:

Every time you hook a survivor for the first time, you get a token. For each token, you block the most progressed generator for token*10 seconds. So basically you hook the first survivor, you block for 10 seconds, you block the second survivor, 20 seconds, then 30seconds. When you reach 4 tokens you block all gens for 40 seconds. This would make it easier for you to realistically complete your "hook everyone" quest with a small amount of slowdown if you are doing your job.

By showing you the most progressed generator it also gives you a new target, so there is less reason to camp the hook.

This change would create a "you are rewarded for each unique hook" effect, but also let the survivors and the obsession counterplay it, by letting them know you have the perk, they can choose not let you hook the last survivor before the last gen is done.

Sorry for this long rant/idea. I just feel like a perk like this could be really fun to play with, but on high MMR it feels useless in like half of the matches, if not more.

What do you think?