So, overall the QnA was actually pretty good. Some things I agreed with, some I disagreed with but overall mostly positive. I'm especially interested in the SBMM changes and the Dead Hard rework.

There was one thing that was pretty concerning - but it takes a bit of reading between the lines so bear with me.

A while back, several killers received pretty harsh nerfs, despite being considered mid or low tier in higher MMR play. While it wasn't expressly spelled out, the dominant opinion was that these killers were really difficult for new players to deal with - despite struggling at higher MMRs. Wraith, for example, was never especially strong - and now has a really low kill rate overall (even taking his potential versus newer players into account).

Not great, but 'we don't balance around high MMR' and all that.

However, some other killers have very low kill rates overall, but weren't buffed (Nurse, Trickster) - seemingly due to concerns that they'd be too strong at high MMRs. Some people pointed out that this looked very much like an odd double standard.

When asked about the nerf to Twins, a killer often considered one of the least fun to play and with the third lowest kill rate in the game:

"Why do you nerf some add-ons for unpopular or weak killers?"

"Players at different skill rates perform very differently using different killers. Twins are a great example of this- at low and mid MMR, they're terrible, while at high MMR they're absolute monsters. Some of the highest kill rates in the game come from Twins, so further buffing them doesn't make too much sense, since while it bolsters their performance at low to mid MMR, at high MMR it would make them even stronger, which then wouldn't make sense. Nerfing them may seem cruel, but the add-ons were influencing their ability more than they were comfortable with."

That really does seem to confirm it.

Think about it this way.

BHVR nerfed several killers - Wraith being the best example - who were considered strong against newbies but weak at higher MMRs, and is now weak overall. 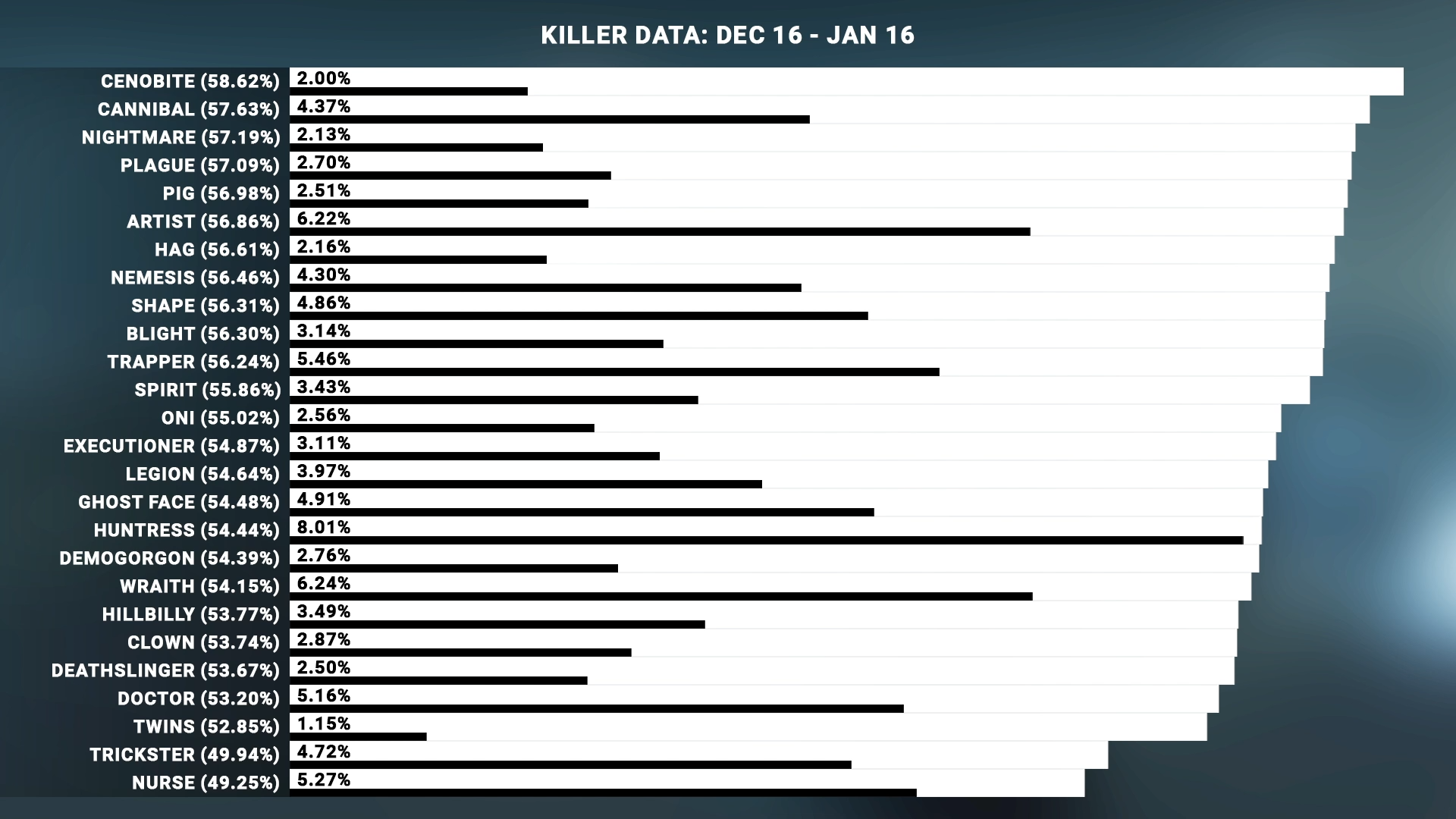 (Post nerf: Wraith is now very low kill rate wise, despite him still being strong against newbies - which means he's getting clowned on against anyone else, Twins are even weaker - but still nerfed).

This means that killers are getting nerfed from both ends.

That strikes me as a ...very odd way to balance your game - and it feels like you have to pick one. If you're going to balance around gross kill rates, which are overwhelmingly offset by new/low MMR play, then you need to follow through with that and actually buff Wraith, Slinger, Twins, Nurse (yes, Nurse), Trickster and co.

If you're going to balance around high MMR play, then you need to do that.

Trying to do both at the same time is going to end up with a lot of pretty meanspirited, bizarre feeling nerfs to killers that are already struggling in high MMR play and at the same time nerfing killers simply because a handful of really good players are too good with them.

What this is going to result in, is an ever-shrinking variety of killers the higher your MMR gets. This is already evident for people who play higher MMR survivor games - endless streams of Blights, Nurses and Huntresses (with the occasional basement Bubba), and if this balance philosophy carries forward - it's only going to get worse from there.

The only solution I can see is to bite the bullet and try to get weaker killers more viable at higher MMRs, even if this comes somewhat at the expense of lower MMR play - OR - trying to get killers with a low gross kill rate higher, even if it comes at the expense of high MMR play.

Or am I missing the point?