Now, I'm gonna suggest a rebalance that addresses all of these points (or at least tries to) 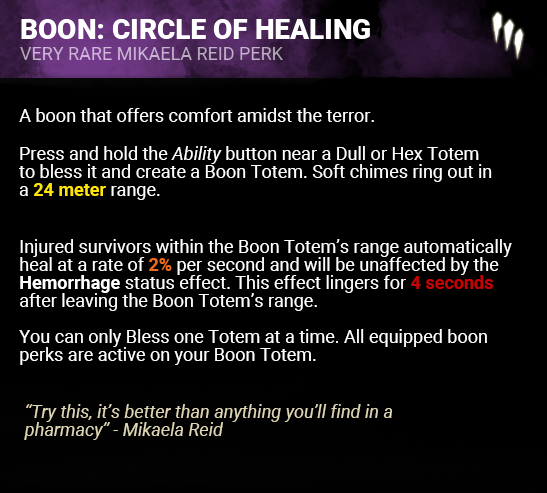 This is an idea that was inspired by the new hemorrhage status effect, which causes healing progress to regress when not healing. This basically flips that on its head, allowing injured survivors to heal even when they aren't healing. With this, it would take 50 seconds of continuous time spent in a totem to fully heal up. It also seems thematically more appropriate, as now it seems survivors are able to heal magically instead of just being like "Nice magic, now I feel like I can heal faster."

This makes it so placing it away from the killer's point of interest is less powerful and encourages people to place it near active gens, where the killer can actually take the time to interact with it if they feel like it. Being able to heal passively while doing gens is extremely strong, but it does take a long time and if the killer is running anything that applies hemorrhage you will have to watch your heal progress slowly and pathetically drain if you end up being chased away from it. It's still a very powerful effect, but I think most people would find this more fair.