Is Wesker actually supposed to GRAB every time he downs w/impact or this a bug?

I know future Wesker mains will hate me for making this thread, but I would really like to know this before he goes live / get this fixed / looked at, etc.

My initial report was that Wesker has built in Lightborn during his "grab" pick up. If this was only if a survivor was fully infected, that wouldn't be such a big deal. In fact, it'd be a reward for using his power well. However, after playing the PTB, it seems like no matter your infection (Could be 5% even), if you're injured, he hits you with his power and you slam into a wall, he automatically grabs you.

After reading his power multiple times, I can't see where this is intended. Is it poor writing of the power description, or is it a bug that he seems to ALWAYS grab if his power makes contact when hitting a wall for the second health state?

*from the power description*

"should the Mastermind crash into something during this Bound, he will slam the Survivor, causing damage; if not, the survivor is thrown, losing a health state if they are thrown into any solid object"

-Not once does this state he grabs you. You are only thrown or slammed into an object causing damage, and I would assume you slide to the ground afterwards, so that Wesker would pick you up like any other killer.

Later in the description it says, "when fully infected, the Survivor suffers from the Hindered effect. If a Virulent Bound grabs and slams a Survivor while they are fully Infected, the Mastermind will automatically carry them."

Now this part of the description DOES STATE YOU WILL BE GRABBED. While I realize that on PTB you could be full health, and if you reached max Uroboros Infection, then were hit with Virulent Bound, you'd immediately be grabbed without having to deal with BOTH HEALTH STATES, it does not state anywhere you'd be grabbed without full infection.

To add on to my previous bug report / feedback - As of right now Wesker has built in Lightborn if he grabs a survivor with Virulent Bound. This would be okay if it was just for him having a survivor fully infected and grabbing them, but this is for EVERY SINGLE GRAB. On the PTB I was rarely downed / picked up any other way than by being grabbed. So, basically Wesker gets free Lightborn without using a perk.

We tested for about an hour and no matter how many times we tried, Wesker could not be beamer or Flash Bang saved when "grabbing" a survivor, and since he rarely ever picks up like normal, it made him "unsaveable". I did see a clip of someone Twitter managing a Flash Bang save, but after all of our testing, I'm almost certain since this save was in a public match that the killer just did not look away fast enough.

On PTB, you can not even start blinding till Wesker can already start looking away, making it impossible to get a beamer save. It would already be extremely hard to get these saves considering you'd have to guess where the survivor will get charged into something, and hope that part of Weskers face wouldn't be eating a wall for you to blind.

So, can we can we confirm if EITHER of these things are a bug or intended.

If the grab is intentional, please consider removing the Lightborn from it. Obviously let it be just like a regular pickup animation that you can only "finish the blind" right as the grab ends to get credit for a save. Too early, they're still in animation, so the survivor isn't dropped, too late, they can look away. Right now you just cannot blind this animation no matter what. I'd also like to note that we tested blinding him while vaulting, and if the killer looks "DOWN" he is blindable, but if he turns his camera straight up, he is unblindable, which makes me think all things related to blinding him are bugged.

If it is not intentional that he ALWAYS grabs when downing a Survivor against an object - no matter the infection level - can we get clarification on that?

Obviously I have been very vocal on my opinions related to Flashlights, but they are already the weakest item in the game and a killer should not be immune to them by default. These are one of the few items that I still get great joy out of practicing / trying for tricky saves. I don't mind the save being difficult, but having it be impossible is truly unfun. 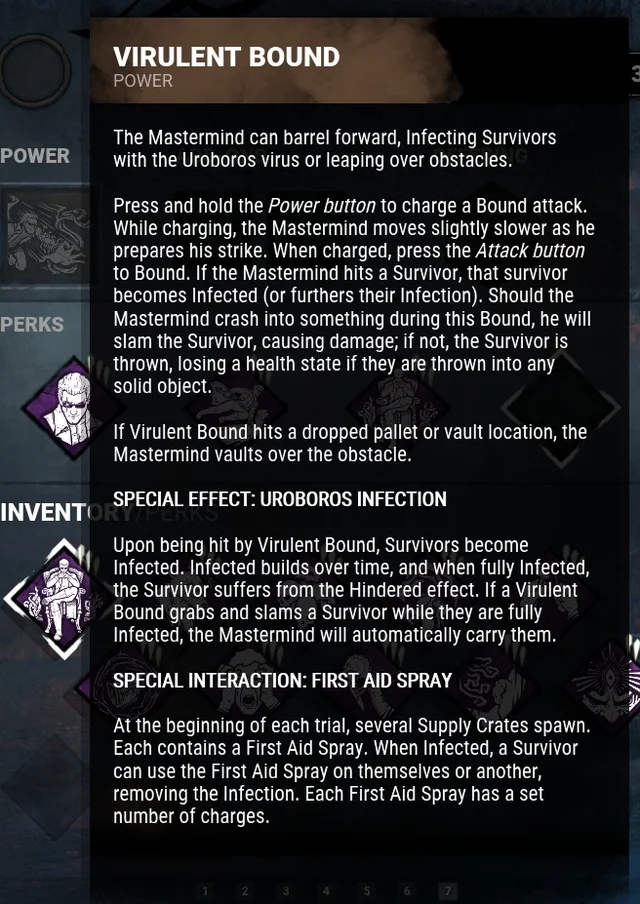 *Edit: After reading a response, I can see how others may feel he REQUIRES built in Lightborn, so I submit a compromise as Feedback.*

"I can agree with this, so wouldn't a fair compromise be that he only insta grabs / has lightborn if they are full infected & instagrabbed. However, if he simply hits them for their second health state / even slamming into a wall, the survivor slams and then is dropped to the ground. He then has the ability to pick them up naturally like any other killer, so he can safely/smartly do it. This wouldn't take longer than other killers, either, because killers already have to wait through the "cooldown" animation like Nemesis' tentacle sucking back in, etc.Right as the slam that causes damage hits they fall down and the arm retracts as his "c/d animation" taking the same amount of time.

The only person that skips this "cooldown" is Trickster, which I never fully understood why."