Clarification about hostage taking / bodyblocking in a corner

A couple of months ago, I got bodyblocked in a corner by a streamer killer for 6 minutes while he went to watch my friend's (sole remaining survivor) stream. He acknowledged in endgame chat that he did it specifically to make me DC (which I did not), and only let up when my streamer friend told him that yes, I was in her swf.

For this whole time, I could not participate in the game in any way, considering I was trapped.

Several times on these forums, the devs have spoken out that keeping one person trapped through bodyblocking is a reportable offense, because it prevents the player from participating in the game, and that it is so regardless of if other survivors are still alive and kicking.

Here is a screenshot of Mandy adressing that subject on a post about a similar issue. 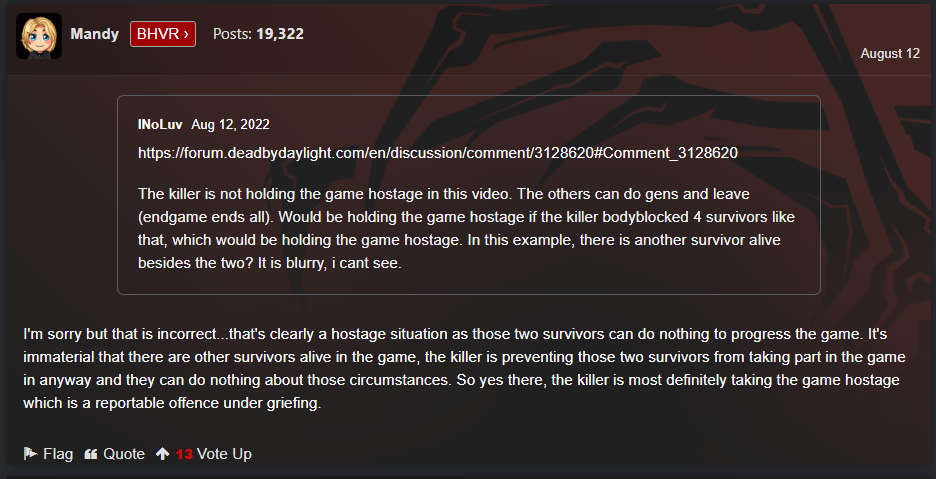 However, when I went to DbD Support to ticket this issue, with video proof from the killer's stream, I got this as an answer :

The date is far back because I didn't know you could have an update on your ticket before today.

So... How does it work ? Is trapping someone in a corner reportable as a griefing, or not reportable because bodyblocking is not a punishable offense ?

I am very confused and a bit disheartened that this guy can still trap people on stream for ####### and giggles and not get a slap on the wrist for it.

I would appreciate a clarification on the subject from a mod / dev if possible.

Thank you in advance :)