Lery's Memorial Institute is a map that is usually disliked by the majority of players I speak to. Survivors dislike the difficulty of finding gens while killers get frustrated with the absurd number of vaults. Both sides usually agree that it's a rather hard map to navigate as it's large size and indoor nature help players lose themselves quickly. Well, there are some features of the map that players can take advantage of to help them navigate this maze of corridors and outwit their opponents.

The primary things to pay attention two are the signs/markings and the outer wall.

The outer wall of Lery's is a linear corridor that laps around the maze of rooms in the center. This area is used for moving quickly as the lack of obstacles allows players to run as fast as their legs, or the chainsaw will carry them. This area also has a risk, chief among them the open sightline. Due to the overall lack of props on the edge, aside from the occasional hospital bed pallet loop and totem, there is almost no cover meaning that being seen in this outer area will result in a chase. As a general tip for survivors, the edge generators, if any appear, should be finished last. This will force the killer to either take a slow walk around the edge to patrol the generators or attempt cutting through the middle which can potentially confuse them. Towards the end game, most players should be in this outer area looping the facility for the exits.

The signs and markings of Lery's Memorial Institute are little map features that can provide some insight into where in the maze-like part of the map you are. The main attractions in this regard are the glowing signs: 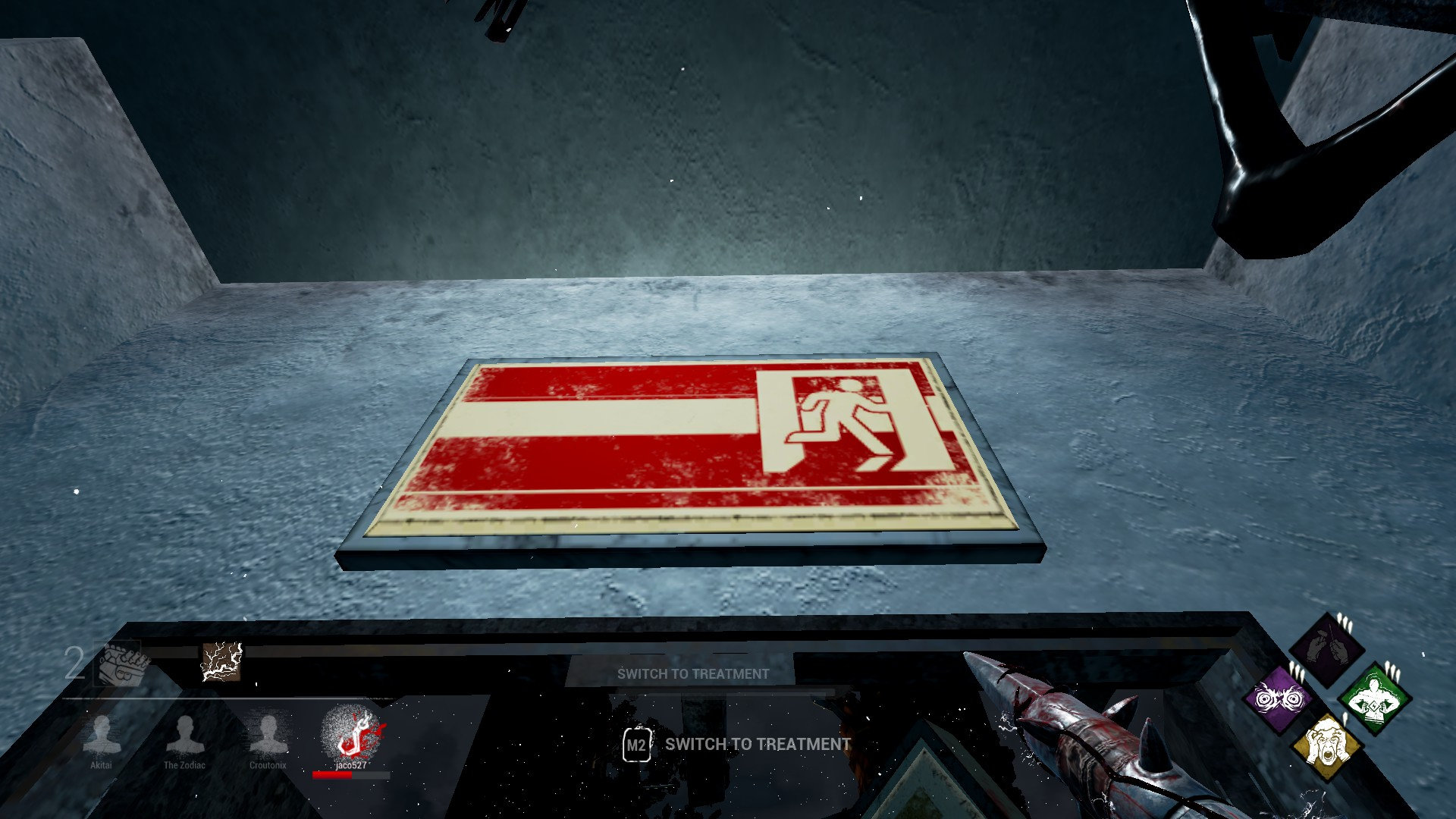 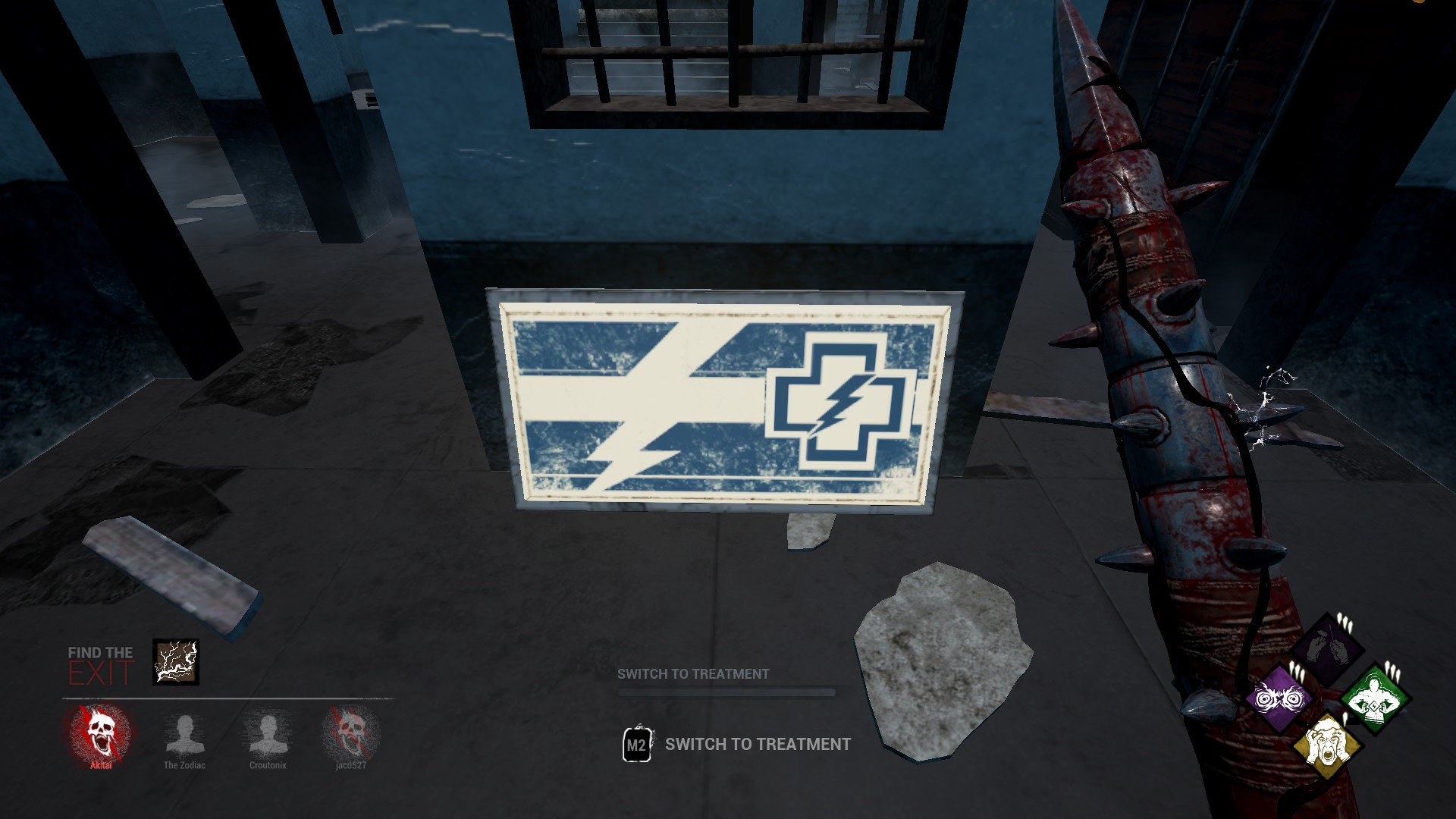 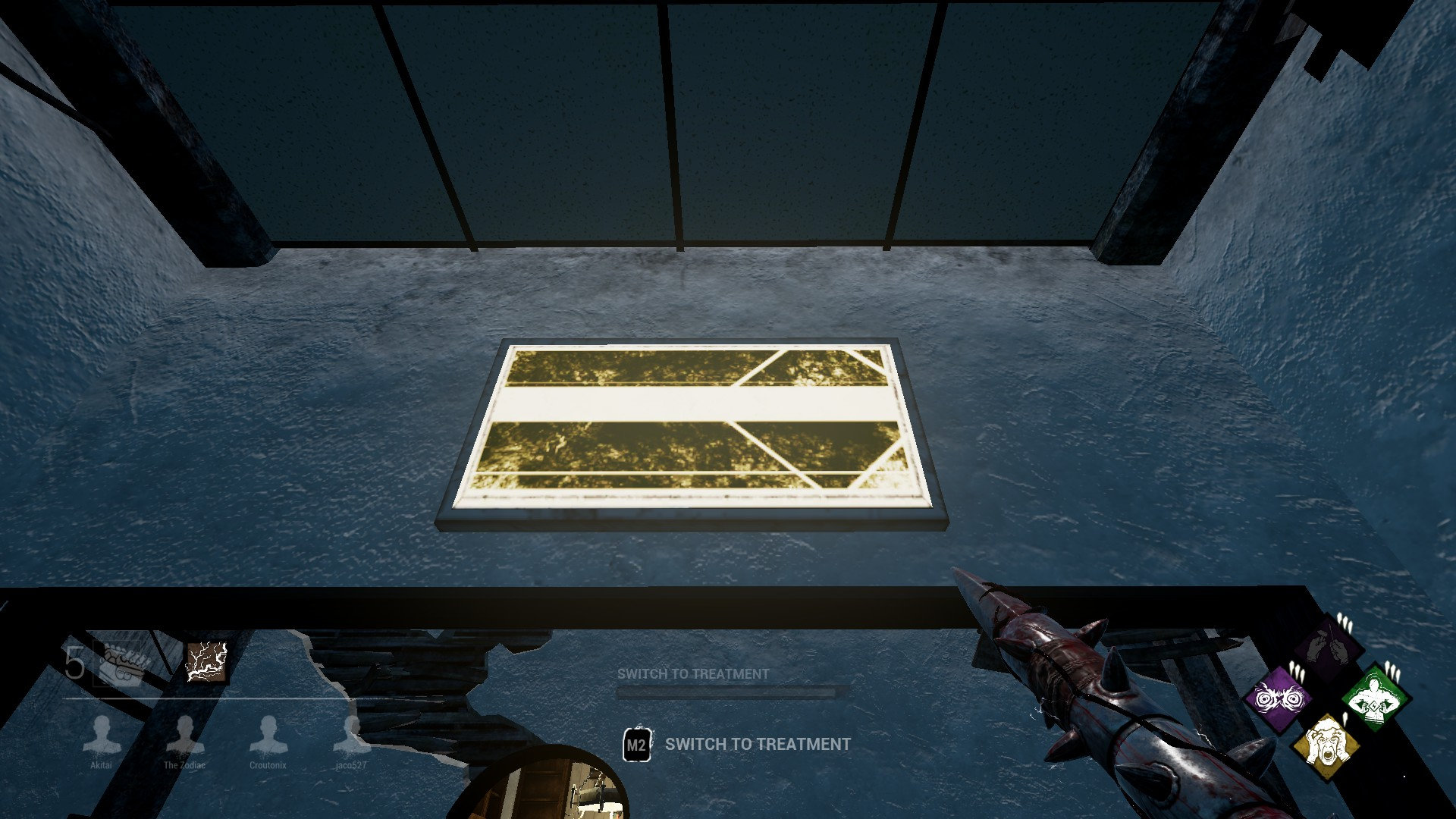 The flickering red sign is more often noticed directly above the door leading to the exterior of the facility and by extension the exit gates. What some players don't know is that this sign is also above the doorways of the entrances adjacent to the exit. After the generators have all been powered look up for these flickering beacons and you will find yourself at the switch before long.

The flickering blue sign is seen at one of the entrances to Doctor Herman Carter's Treatment Theatre. This area is important as it will almost always have a generator. However, our focus here is that it is one of the two places on the map where "The Basement" can spawn. This area also seems to usually be in the center of the facility, but please don't quote me on that. Overall it's a great area to get a generator done early as the generator powers the shutters over the vaults above, though if the basement is nearby it is best to be careful to not mess up any skill checks on that generator.

The flickering yellow sign is always seen near the "Library" as the wiki calls it (even though I am relatively sure that it's just The Doctor's study/office.) The Library is similar to the Treatment Theatre in that it can have a generator, has vaults, and can also have a Basement Staircase. The main differences are that the Library vaults are on the same floor as the generator and that the Library generator is not as common as the Treatment Theatre one.

The main focus on these areas in that they both can potentially have Basement Staircases. Due to the severity of being hooked in the Basement, I strongly advise both new survivors and old to scout out the map and find the basement as soon as you're able. That way my final tip will be more potent.

As I mentioned earlier there are markings to take note of inside the Institute here they are: 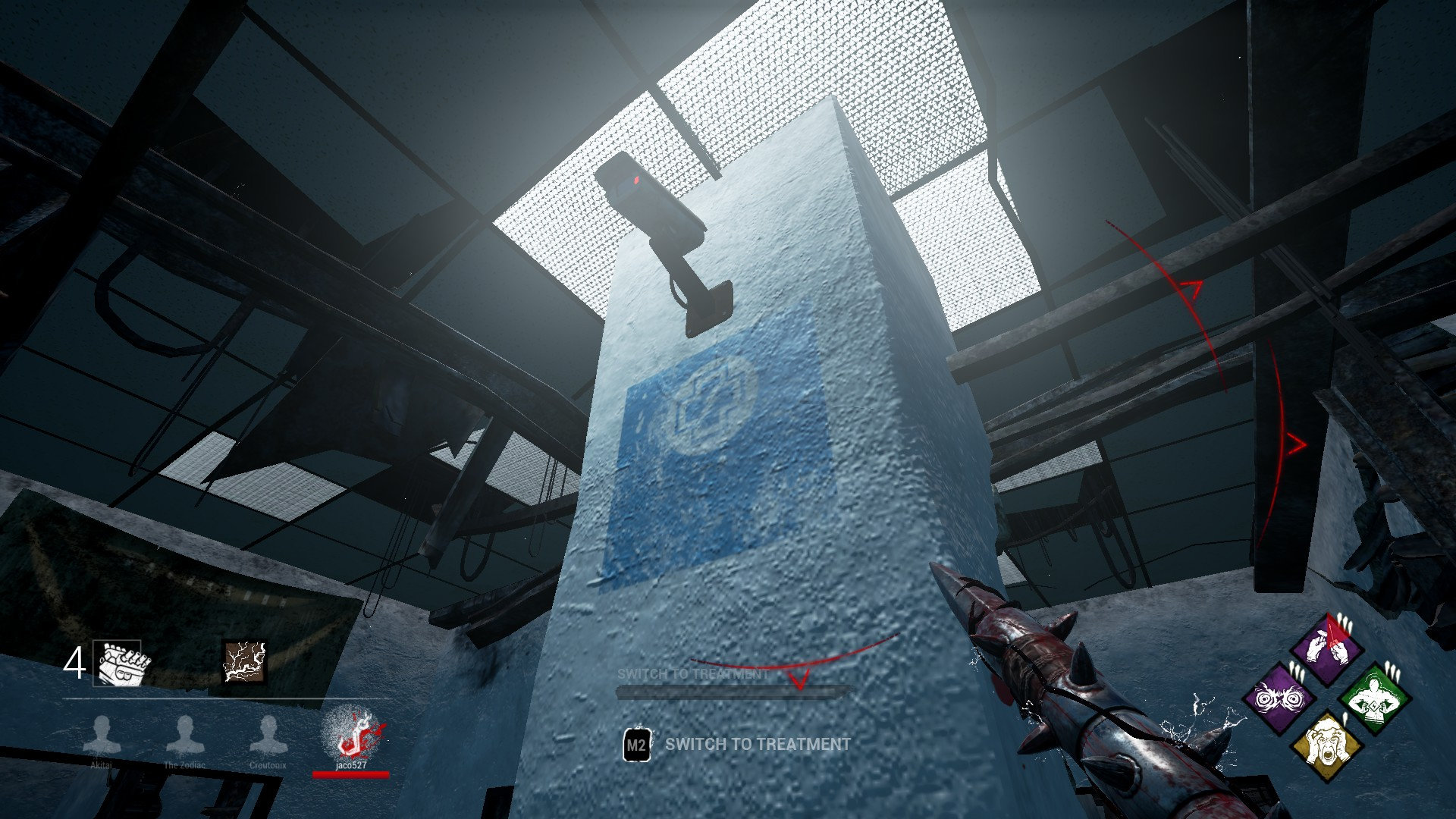 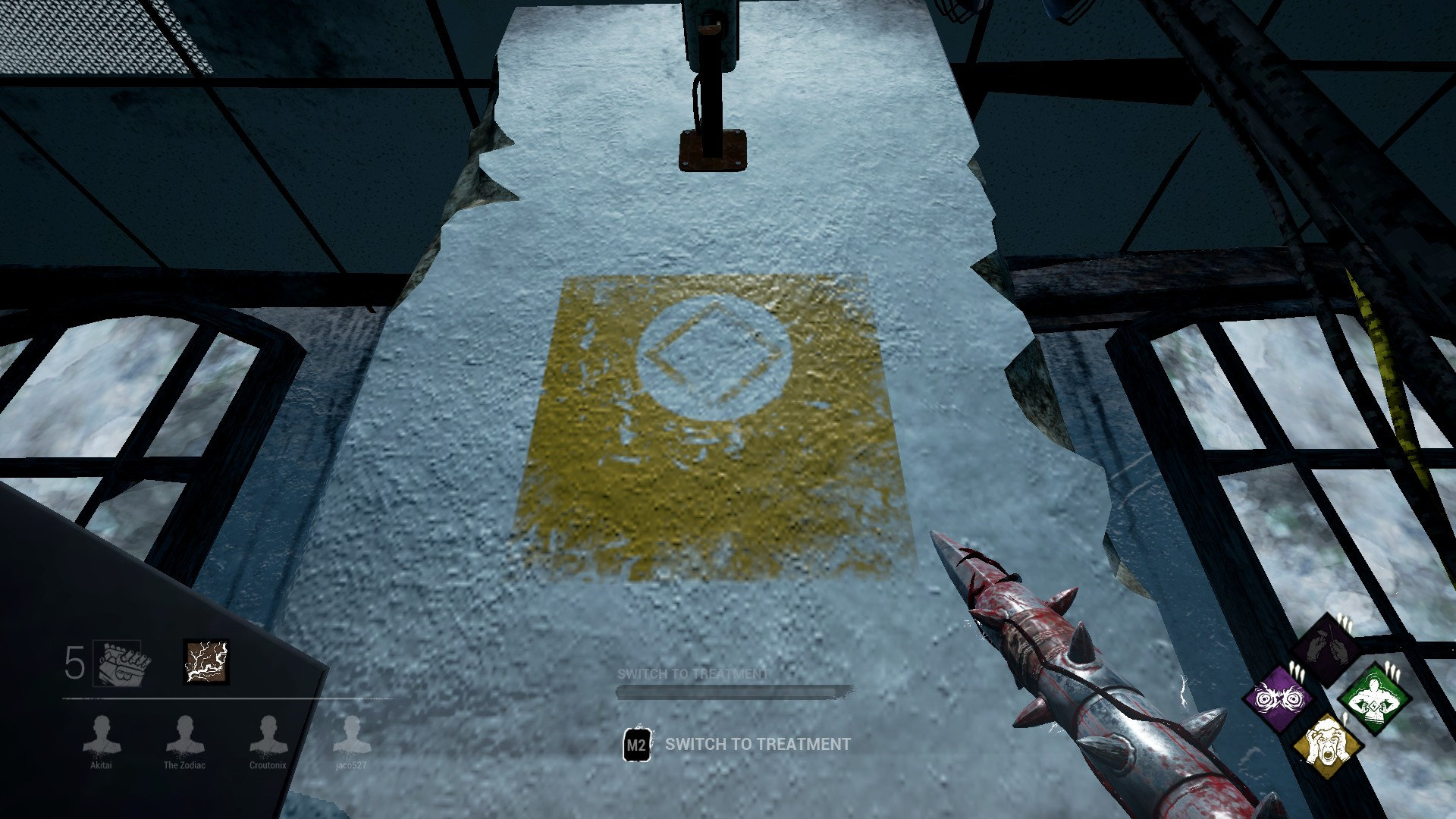 Now in case the color scheme similarities didn't jump out at you it is my strong belief that the Blue Marking corresponds to the Treatment Theatre whilst the Yellow Marking pertains to the Library. Both of these markings can be seen on the pillars of the interior corridors and the exterior corridors of the map. I haven't studied these markings nearly as much as I would like as I only have so many broken glasses but I believe that these markings only appear in hallways near these respective rooms. Therefore once you discover which room has the Basement Staircase (Treatment Theatre or Library) you can use these markers to avoid the basement while in a chase. This will help you counter basement builds and make unhooking yourself less risky for your allies. For killers just reverse the phrasing a bit and chase survivors towards the corresponding basement room.

Well I'm afraid that's all I've got folks but best of luck in the fog, especially in Lery's Memorial Institute.