Overwhelming Negative Reviews on the DLC

With only 9 days left to remain, if the Devs decides to release him with the changers they made

If from what Peanit said ended up being True 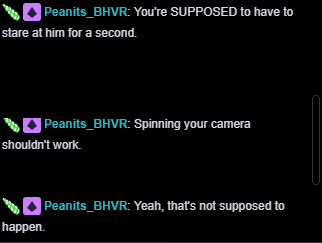 He will still be the weakest Killer, with only 1 Second to break him out of stealth, he is still useless

I can guaranteed the devs that if they release him like that, he is almost certainly to be Overwhelming Negative Reviews on Steam DLC Page. With no one buying the DLC

Also Corns and Grass, Survivors can detect you out of stealth from it, but you can't Stalk them from it...nice mechanic

Why? Because once he breaks out of stealth, he enters a lovely 15+ seconds cooldown before he can use Nightshroud again, and even if he exposed a survivor

And you only need 1 second to break him out (This is what the Devs intended in the first place, without realising this is extremely weak)

You only need 1 pellet as a survivor/ sprint burst to deny him, by the time you circle in 3 loops, his exposed effect is already gone

Unlike Myer where he can stare at survivor's face, with exposed effect up to a minute+ and more with addons

This is also one of the few Chapters where it doesn't come with new maps, no new survivor, and only new Killer (Like Leatherface), so if the Killer is bad, no one will BUY this DLC