Home› Feedback› Feedback and Suggestions
Due to an issue with Hit Validation affecting interactions with Oni players, we are temporarily disabling the feature until the next hotfix.

Players would be able to access a 'profile' menu by clicking their level icon on the top right of the screen. The profile menu would display overall information based on all performances for each match. Players would be able to see other players profiles by just clicking on their name in the waiting lobbies or if they are friends, you can access their profile through the friends list (Read Friends section to get an idea of what I'm talking about).

If this profile idea unsettles you, please look at Profile Restrictions section before having a go at me in the comments section.

With the new 2.0.0 update coming out soon, players will be able to level up their account level. The level icon on the top right of the screen would be a perfect way to access your individual profile. Once clicked, a menu overlay would come up giving you overall information (A list of displayed information can be found in the Profile Information section).

Let me start by saying, the killer would not be able to see some of the information displayed on survivor profiles regardless of whether the profile is public or private. Information that would help the killer in any way would be removed/not displayed until the end of the match.

Also, killers would not be able to access the survivor's steam profile page until the end. This should reduce the amount of times killers leave lobbies just because of a player with high amount of hours played.

Players would not be able to upvote/downvote other player's reputation until the very end of the match. Please see Reputation section to learn more about this.

Here's a list of stats that you would be able to find within your profile;

[NOTE] In the profile menu, general information would always be displayed. As for survivor and killer information, you'd have to toggle between both of them using tabs. Please see Sketch Plan section for an idea of how it'd look like.

This mechanic would allow players to upvote or downvote other fellow survivors after a match has ended. It would be a rating system out of 5 stars and it would balance out based on how many upvotes and downvotes you have. Now before you start typing extremely fast in the comment section, finish reading this section.

Players would be able to toggle this reputation mechanic off. A lot of survivors get salty after a game and usually blame someone for dying. Players end up going onto other player's steam profile and adding the usual "-rep you succ" (or the equivalent in Russian) comment. I thought, maybe adding an official reputation mechanic would divert players from commenting on each other's profiles and just use the rep system instead.

(Im with ya, this is sort of a terrible idea but I wanted to keep it in here in case someone wants to refine this idea and possibly make it into something usable. So please don't attack me.. It's. just. an. idea.)

In game, you'd have a friends list (very much like how CS:GO does it). It would basically take all of your steam friends who play DBD and place them on a list. Within this list, you'd be able to access player's profiles (depending on whether they are public or private). Also, this list would be easily accessible when you are inviting friends to your party (instead of the steam overlay).

(Again, just an idea I thought would be cool and somewhat needed so that you can stalk your friends and see their progress >:) hehe) 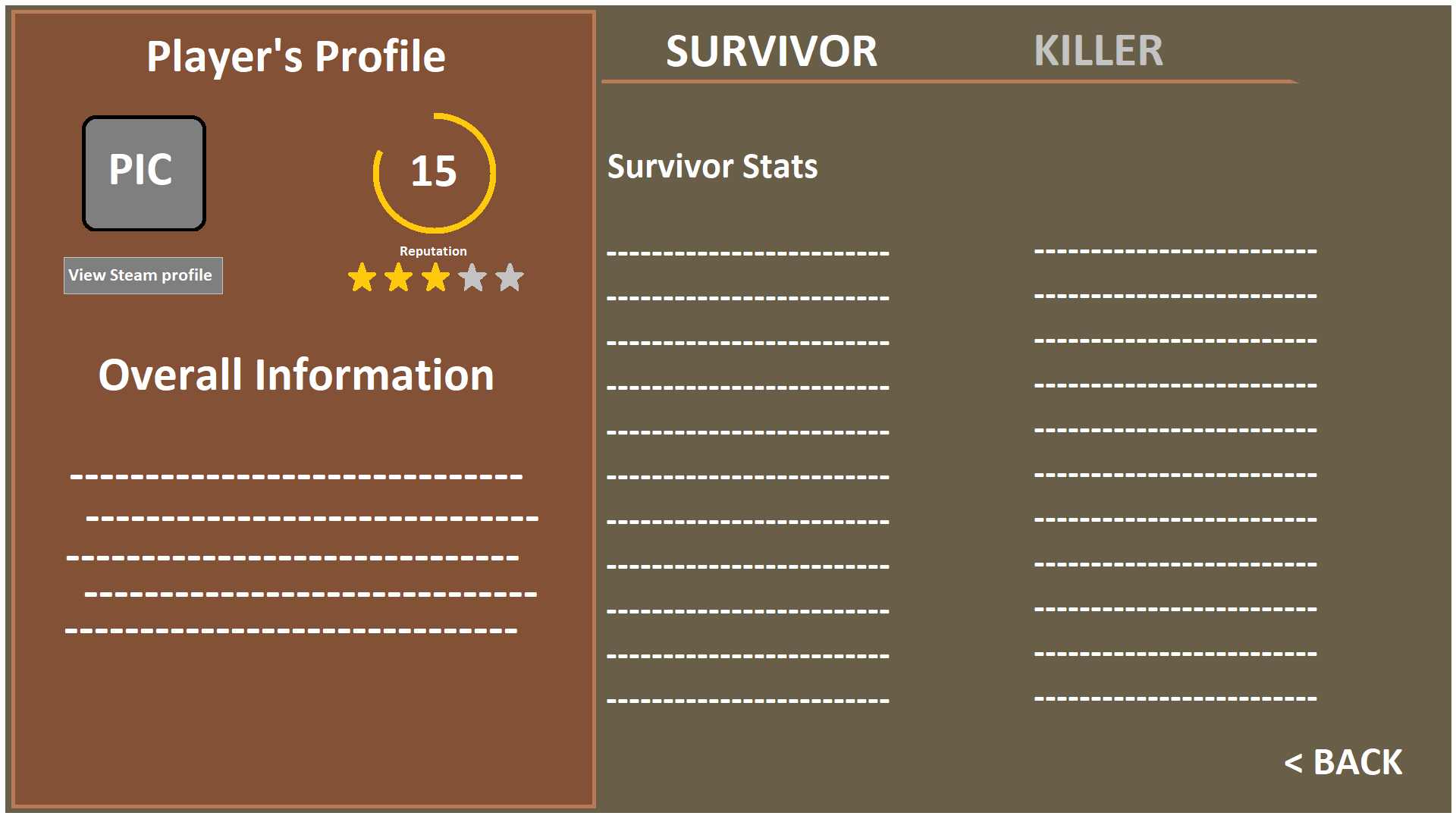 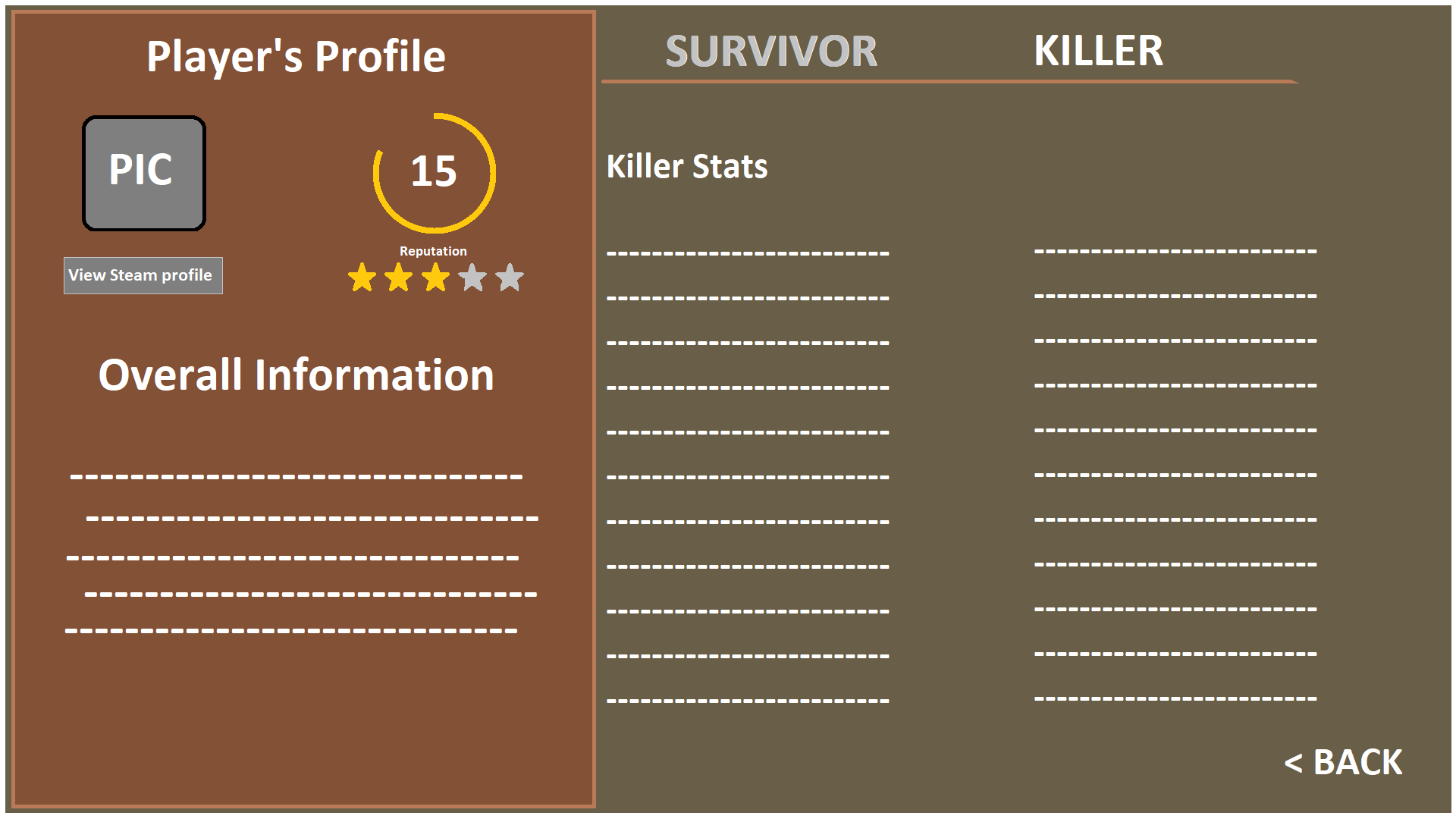 I would love for this to be added. I'd like to look at all my great skill checks that I've managed to get and feel proud of them. Also, a lot of this information could be used for research purposed. Dead by daylight team could use this (if they aren't already) to see if any significant changes happen to certain mechanics of the game when a new patch is released.
Leave your feedback down bellow! Tell me if you agree or disagree with this idea (explain your reasons of course).