To start off, I'm really sorry for missing out on the day 2 report. I'm gonna blame that on my absurd sleeping schedule. Also, I'm trying to make the title a little bit more explanatory, so if it changes often, you know why. 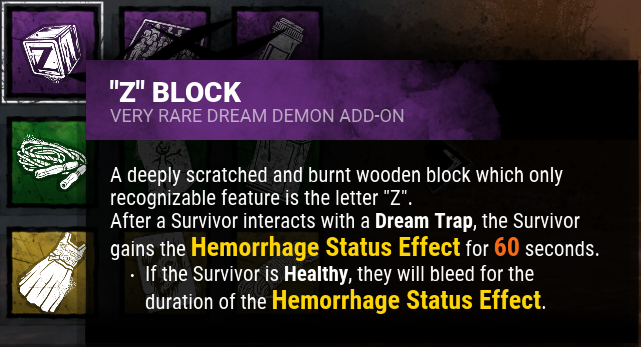 Anyway, it's time to see what Freddy's add-ons can do. To start off, the blocks. These are probably the worst of the bunch, seeing their pathetically bad effects. They apply either Blindness or Hemorrage for up to 60 seconds after a survivor interacts with a Dream Trap, aka either triggers a Snare or uses a Fake Pallet. As you all should know, most survivors barely use aura reading, since it's pretty minimal by default (most notables are downed or hooked team mates) and aura-reading perks are nowhere near meta. Freddy isn't a stealth killer either, so having his aura revealed isn't too bad, and the Blindness doesn't affect the clocks you use to wake up. The short duration doesn't help either. But moving on, the Hemorrage... if you need that to track, you need some better help. The only block of this category worth mentioning is the (see above) "Z" Block, whose Hemorrage also affects Healthy survivors. But in the end, it's still useless. I'd consider using these add-ons only if the duration was changed from a minute to "until the survivor leaves the Dream World". Maybe it's a bit too much... 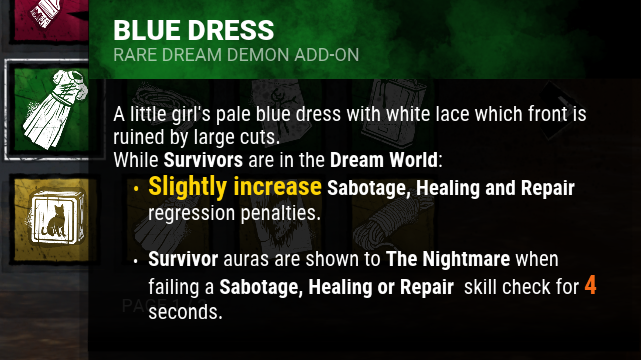 So, we get to the "Dress" series. These are add-ons that affect Skill Checks in the Dream World. All of them Slightly increase the regression penalties, but only the Green and the Blue Dress show survivor's auras when a skill check is failed. Their purpose would be to discourage survivors from using the Skill Checks to wake up, forcing them to either reach their clock or have a friend help them. I didn't check for myself the difference of regression, but when I use them I see a lot less explosions, so I guess they do their job. I'm planning to try an Overwhelming Presence Skill Check build with these kind of add-ons and seeing how much regression I'm able to witness. 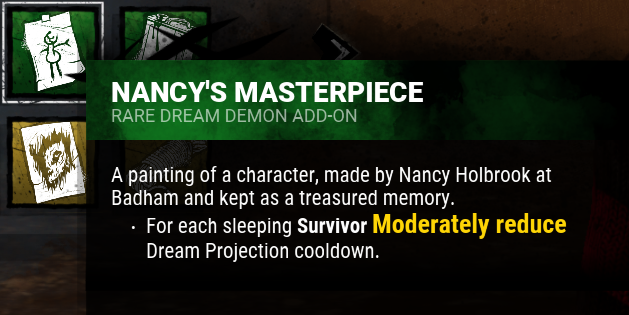 Now we have the Sketches. These increase Slightly or Moderatly the teleport cooldown reduction that Freddy gets for each survivor asleep. Before I go on, I'll say this: it's not a true reduction. In fact, the % of reduction that you get doesn't recharge the power faster, instead the "save" the said % of power after you use it, making it not start from 0. Also, I'm not sure if these add-ons stack.

And yes, this is technically part of the "Sketch" series, but it's completely different in effect. It's part of the masochistic Killer add-ons that destroy your power for the sake of money. Luckily, I didn't check how much the Hindering is reduced, otherwhise this discussion could've been much worse.

Second to last of the series, we have the Jump Ropes. These simply reduce survivors' action speed when sleeping. I've played against them, and they're quite annoying. Don't seem to stack.

Last series, the Dream Pallets collection. All of these add-ons replace your Dream Snares with 10 Dream Pallets, that can be placed at every possible pallet spawn** and will self-destruct after a survivors uses them, usually granting a free hit. Remember that Freddy can't be stunned by them. While they're so fun to use that they should be illegal, I can see experienced players remembering the real ones or noticing which ones are too close to others to be true. I literally had a friend that could recognise 90% which pallets were fake and which weren't. But if you substitute a real broken pallet with a fake one, results are almost guaranteed. 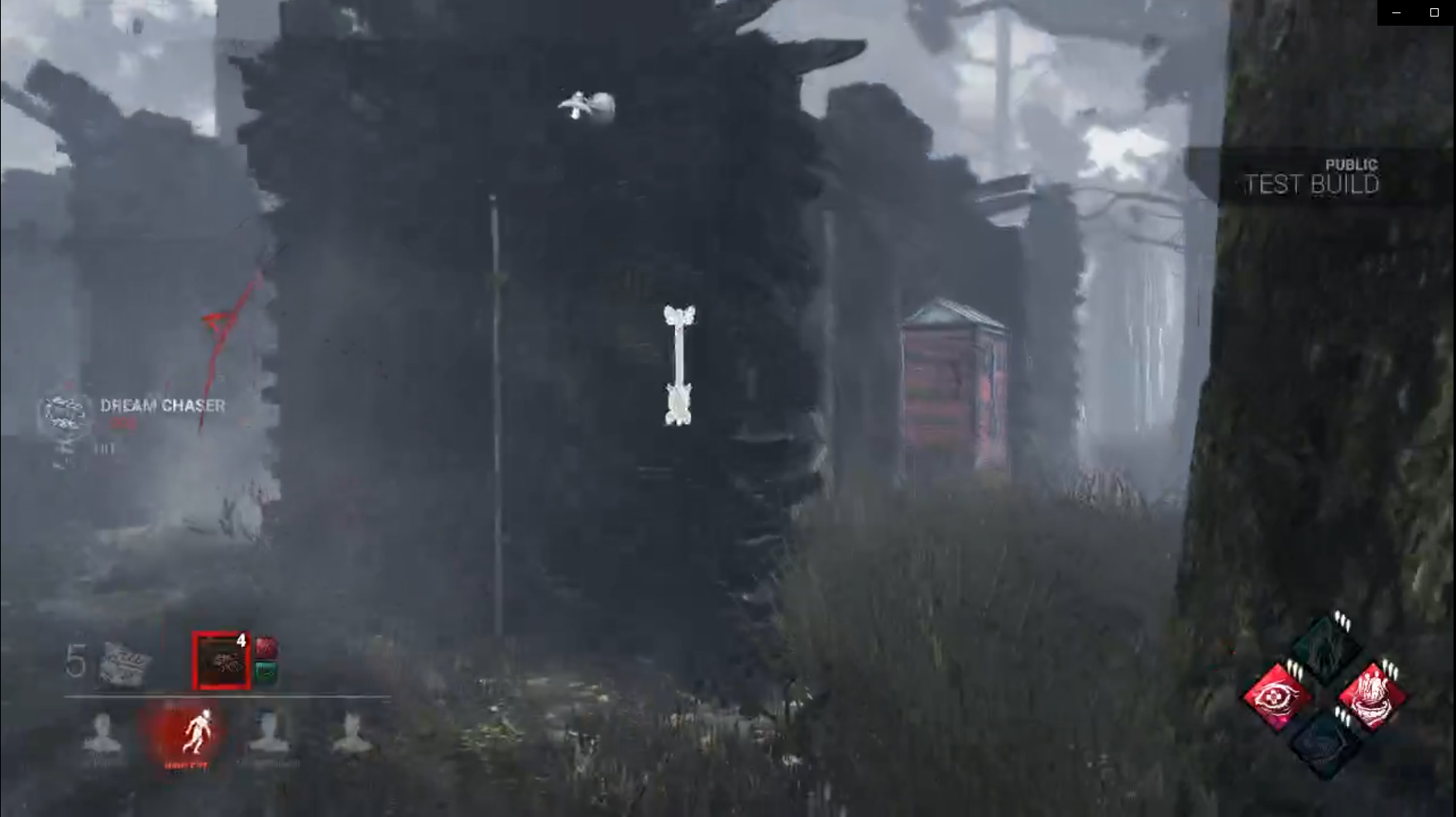 **The loop above always has a pallet spawning the furthest away from the window. A fake pallet near a window would be so obvious that you can't even place it. Also, I had to use 2 asterisks here because using a single one would make this a list.

We now move on to the unique add-ons, aka the ones that have no similarity to others. Except this one, that seems pretty similar to the Ropes. Anyway, these Swing Chains reduce the action speed of ALL survivors, even awake one, for each survivor asleep. Having all survivors asleep with this is brutal. If Freddy had better ways of preventing wake ups, this add-on would be abuseable. 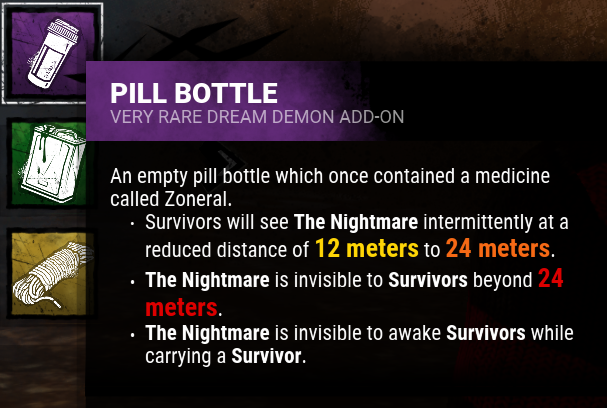 Next one is the Pill Bottle. Already a good add-on before the rework, it still mantains a good usefulness after. In case survivors keep waking up, this is great to catch them by surprise, especially when paired with Monitor&Abuse. Having an effective visibility this small is very useful. Sadly, the being invisible when carrying people won't give you back your old body block ignoring capacities. And if people don't wake up, this add-on is useless. 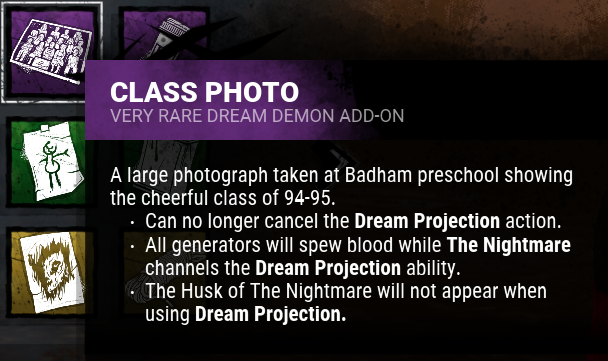 Take the Wraith's Bone Clapper and turn it into a Freddy add-on, here's the Class Photo. Its main use is to bamboozle survivors into thinking you're teleporting to the Gen they're working on, when in truth you're going elsewhere. While it's a fun concept, I don't think it's all that useful. In the best case scenario, some rank 20s would run away, but most people should waste no more than the 5 seconds of blood spewing before returning to repairing. Unless, of course, that's the gen you teleported to. Tbh, the BESTEST scenario would be that someone decides to trust their luck and keep working, giving you a free hit or a potential grab if you're teleporting there.

And we get to the Ultra Rares. The Red Paint Brush, from a fun add-on, became a seriously good one. Having all survivors start asleep is nice, but the true catch are the Skill Checks. Other than giving you the pleasure of seeing about 4 wrong skill checks at the start of the game before they notice they don't work, this forces survivors to either race to the other side of the map to get their clocks, or wait for another one to wake up and then have them help everyone else. But this method becomes increasingly worse, remember. It works wonders with any add-on that benefits from or actively effects asleep survivors, like the Chains, the Ropes or the (good) Sketches.

Last but not least, the Black Box wasn't directly changed too much, adding only that the Obsession will never wake up, but most of the changes were from how Freddy interacts with awake survivors. Using this will mean that there will always be someone asleep until there's an obsession, meaning it's pretty good in conjunction with the Chains, or if you want to be a Dying Light tunneler. Well, it doesn't really benefit chase too much. But I can see it working with Furtive Chase. Wait, did that perk just find a reason to exist?

Anyway, this is all for today. I know that the Dedicated Servers are up, but I didn't have time to test them. I'll blame that on my sleep schedule too. So that will wait for tomorrow. Until then, see you in the Fog.