The Puppet - Creation From Mutilation

Marc Richards was a family man who owned his own puppet store. He ran the stop during the week and at the weekends did puppet shows to help advertise his business. He created some puppets for children, life size ones for others. The shop never made tons of money but he didn't mind because he loved his job. That was until he got drunk one night and had an affair. Full of guilt he told his wife and she was furious. She told him that she was leaving him and she was taking the kids with her. He thought she would forgive him due to his honestly and noticeable remorse but she was having none of it. After seeing the divorce papers in the letterbox and that bills were beginning to pile up, he began drinking. He had hit rock bottom.

All of a sudden he began to become more angry, upset with his wife wondering how she could leave him. Even though he did the right thing by being honest with her. "Everyone makes mistakes" he thought, making himself more angry with every passing thought. He looked at a puppet he was creating for his wife for their anniversary. It was designed to be the same height as her and was meant to look exactly like her. He promised himself he was going to create a more realistic puppet of her, one that shown how he sees her now.

He would go out to bars and stalk women. Anyone who looked like his wife was a target. He would watch them go home and when the moment was right he would attack them, strangling them outside. He took something from each of his victims to add to his creation. The hair from the first victim was jet black and long, just like his wife's. The second victim he took her teeth because her smile reminded him of his wife. He gave the puppet one hand, the other being a sharp, wooden spike. The spike was used to represent how she stabbed him in the heart. He didn't care about covering his tracks, he never cared about hiding any evidence. After being made a suspect the police went to confront him at his shop. After a few questions about where he was the night of the murders, he began to become nervous. The voice in his head told him the end was near and he must act now. He then grabbed his gun from under the counter but took 2 shots to the chest, dying almost immediately. The police began to collect evidence from his shop but never found his puppet, the masterpiece he had been working on.

Marc wakes up in a dark forest. He begins to stand up but feels weird, he feels light headed but also feels slightly taller. He looks down to his hands, they are made of wood and one now being a sharp, wooden spike. He then remembered what happened, how he died in his shop and begins to realise that his new body is one of his own creation. He knows he should be dead but has been spared. He has been given a greater purpose in life, he will now serve his new master and do as he wishes.

Arm is sharpened into a wooden spike. 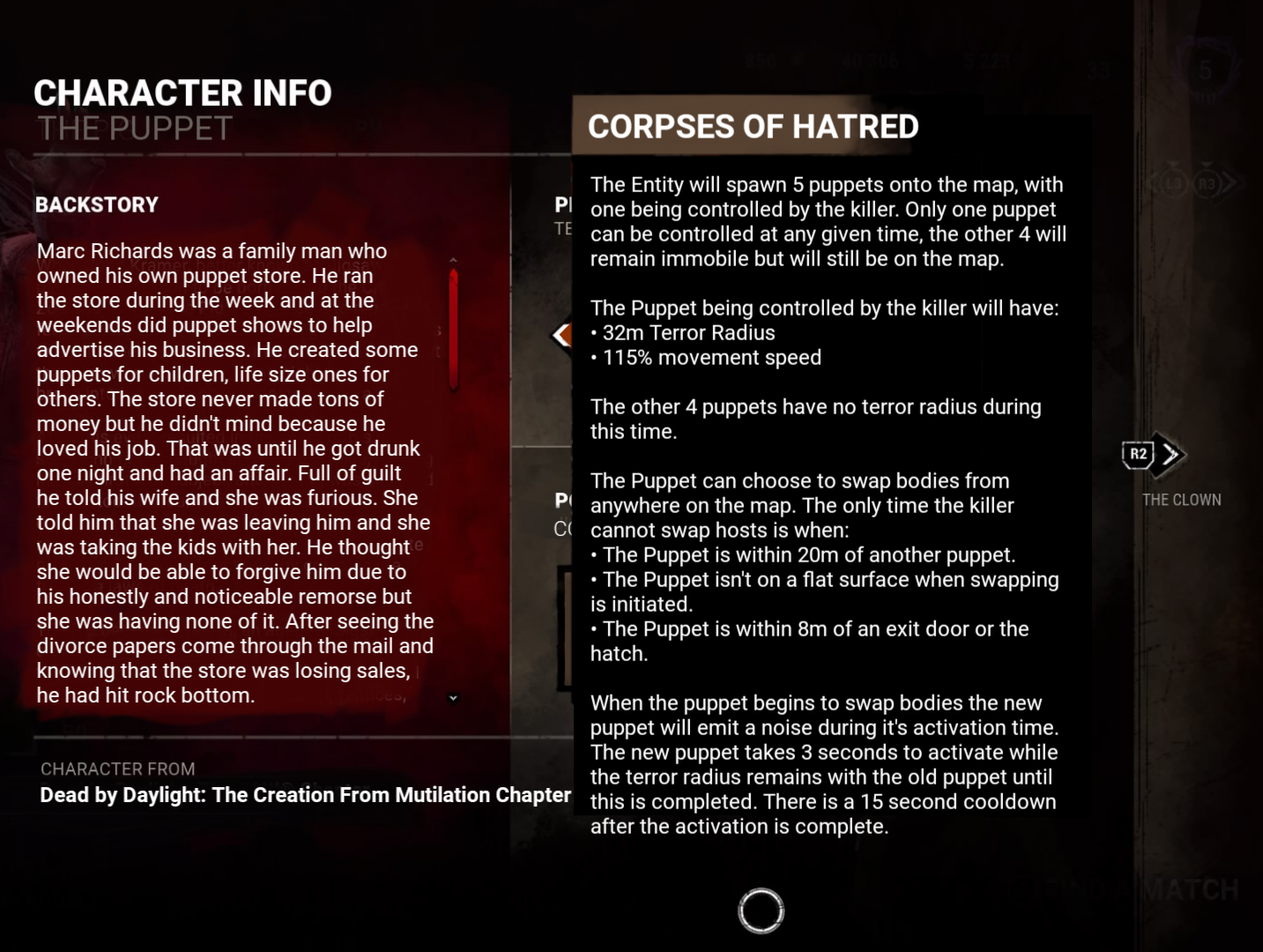 The Entity will spawn 5 puppets onto the map, with one being controlled by the killer. Only one puppet can be controlled at any given time, the other 4 will remain immobile but will still be on the map.

The Puppet being controlled by the killer will have:

The other 4 puppets have no terror radius during this time.

The Puppet can choose to swap bodies from anywhere on the map. The only time the killer cannot swap hosts is when:

• The Puppet is within 20m of another puppet.

• The Puppet isn't on a flat surface when swapping is initiated.

• The Puppet is within 8m of an exit door or the hatch.

When the puppet begins to swap bodies the new puppet will emit a noise during it's activation time. The new puppet takes 3 seconds to activate while the terror radius remains with the old puppet until this is completed. There is a 15 second cooldown after the activation is complete.

The killer can send out a pulse from one of his uncontrolled puppets on the map. All survivors within a 16m range will have their aura shown for 8 seconds. This has a 60 second cooldown. Puppets will give off an audio que when the killer uses this ability. 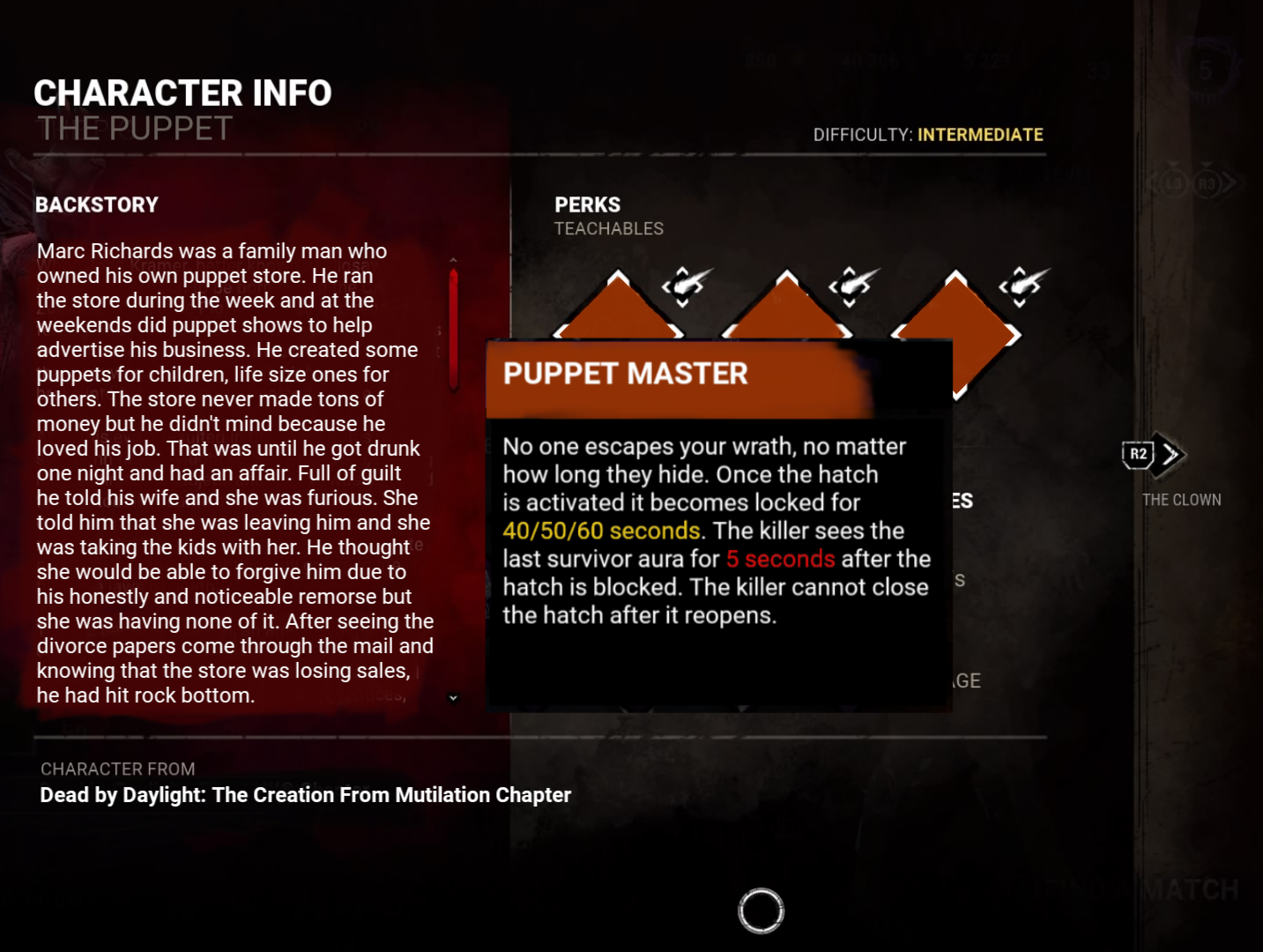 Puppet Master: No one escapes your wrath, no matter how long they hide. Once the hatch is activated it becomes locked for 40/50/60 seconds. The killer sees the last survivor aura for 5 seconds after the hatch is blocked. The killer cannot close the hatch after it reopens. 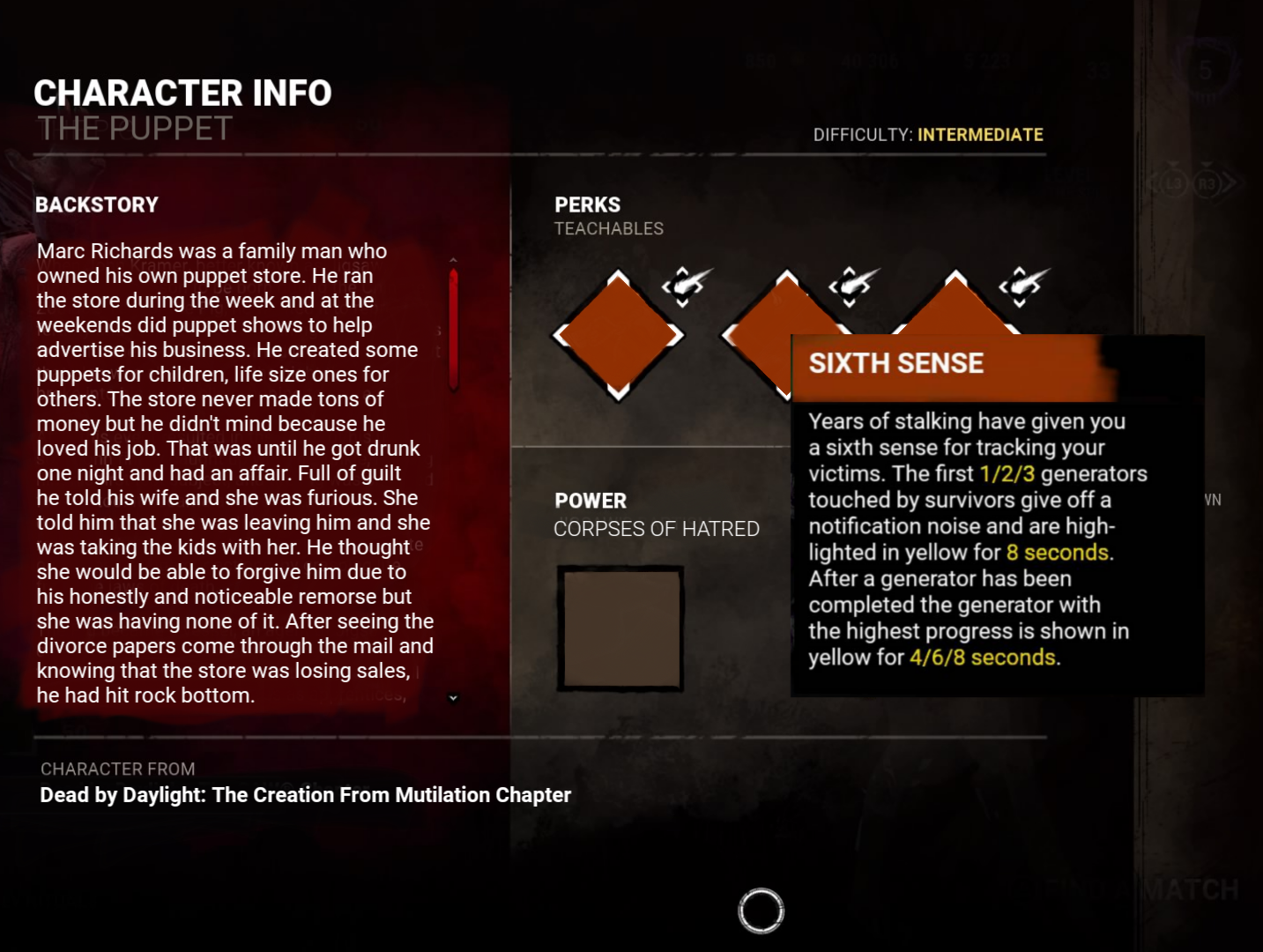 Sixth Sense: Years of stalking have given you a sixth sense for tracking your victims. The first 1/2/3 generators touched by survivors give off a notification noise and are highlighted in yellow for 8 seconds. After a generator has been completed the generator with the highest progress is shown in yellow for 4/6/8 seconds. 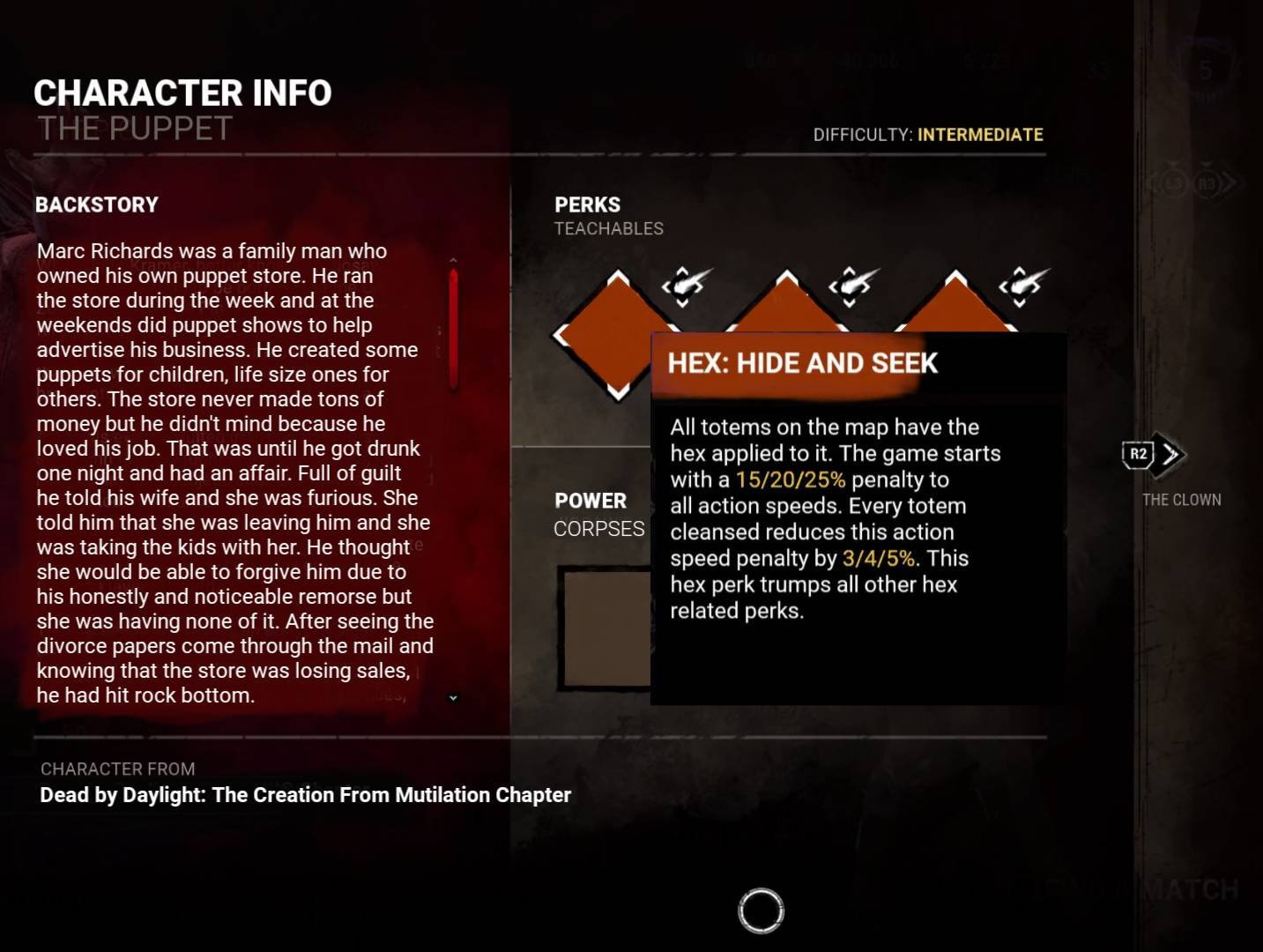 Hex: Hide And Seek: All totems on the map have the hex applied to it. The game starts with a 15/20/25% penalty to all action speeds. Every totem cleansed reduces this action speed penalty by 3/4/5%. This hex perk trumps all other hex related perks.

Gregory House was a detective, who had been working for over 20 years. He didn't have a family as it would hold him back from his job. He was very smart and was the main man when it came to any murder cases.

In his spare time he looked at old cases, mainly missing people cases. He then began to notice a correlation between a few of the cases. He began to do research, where he learned of a being called the Entity. The Entity was being worshipped by cults, believing it was taking people away to a better place to "test them". Greg became interested and joined a cult in order to find out everything he could. He didn't believe anything they were saying, expecting this to be a dead end but he was proven wrong.

He began to hear voices, voices of people he never heard of before begging for help. Then he heard a different voice, one not begging but one who was able to silence the other voices. He knew this wasn't anything human or anything that could be caught by normal means. He then thought of a plan, a plan to try and save these people. He began to ask questions about this world that the Entity created, showing an interest which the Entity liked.

The Entity became fond of Greg and his interest in that world. Greg knew there was no way of saving these people from the outside, so he needed to find a way inside. He asked the Entity to test him, bring him into this world to be tested. Within moments everything became dark and silent. Greg woke up next to a campfire, surrounded by the very people he heard talking to him in the real world. He believed once he got in he'd find a way to get everyone out, but he was very, very wrong. 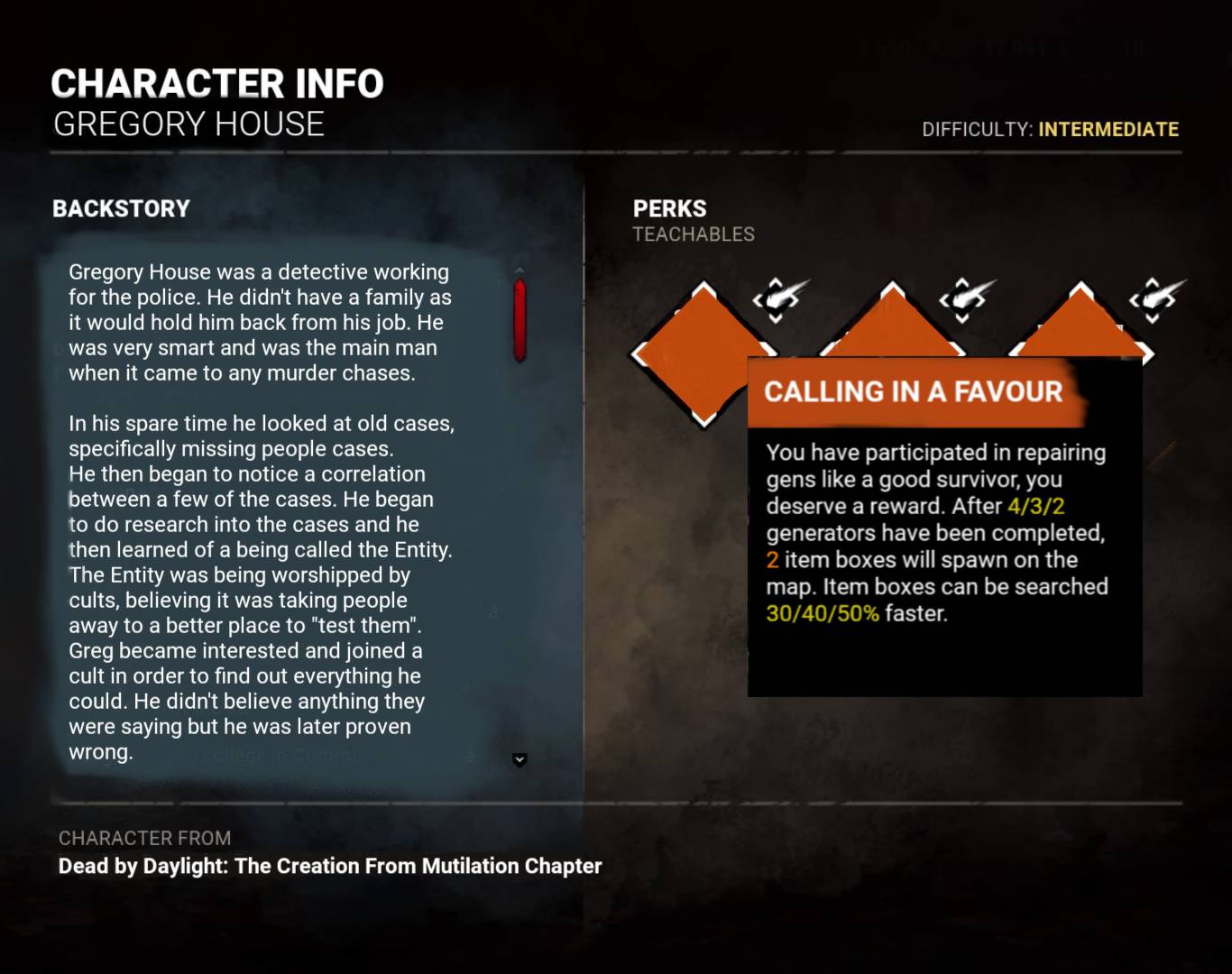 Calling In A Favour: You have participated in repairing gens like a good survivor, you deserve a reward. After 4/3/2 generators have been completed, 2 item boxes will spawn on the map. Item boxes can be searched 30/40/50% faster. 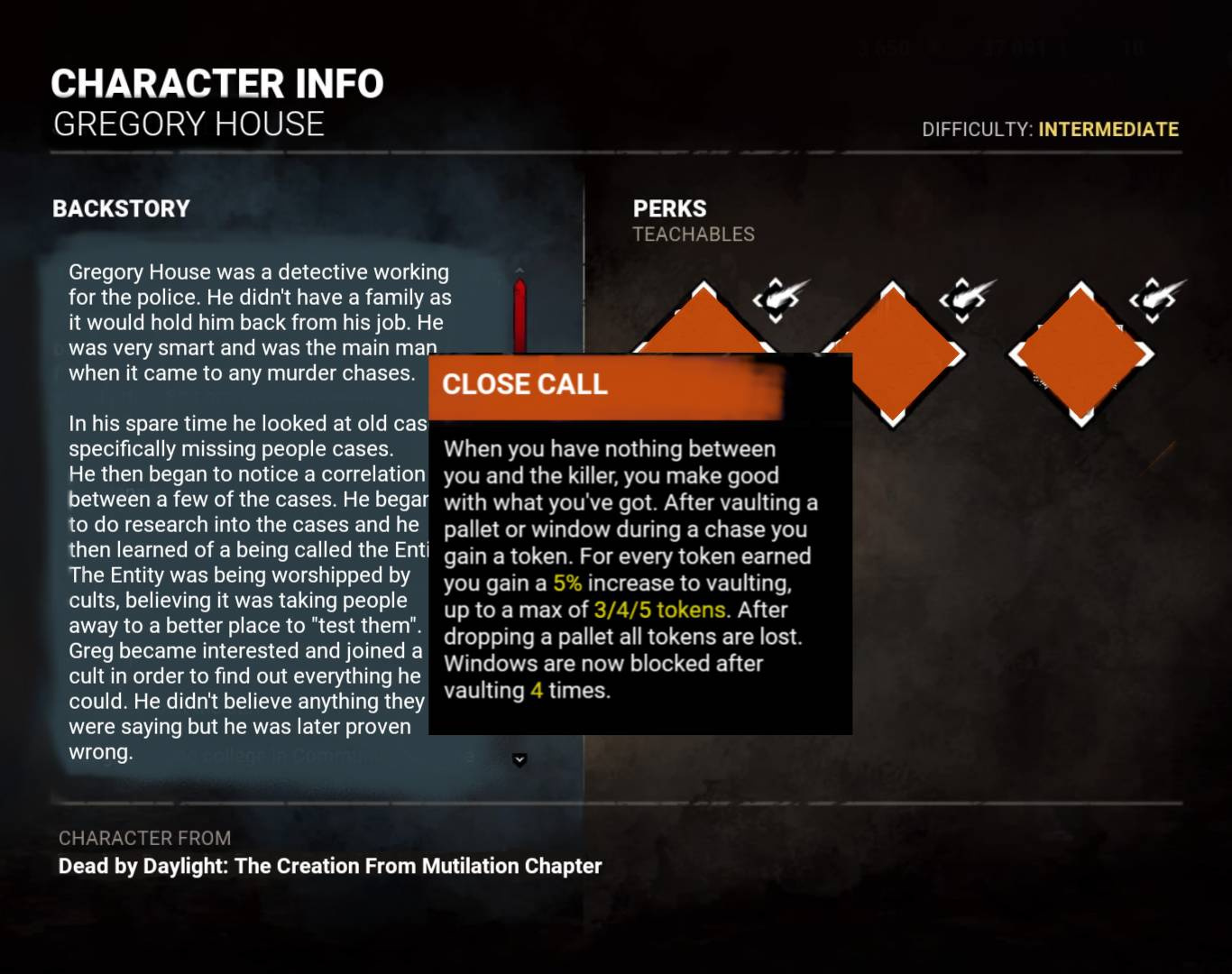 Close Call: When you have nothing between you and the killer, you make good with what you've got. After vaulting a pallet or window during a chase you gain a token. For every token earned you gain a 5% increase to vaulting, up to a max of 3/4/5 tokens. After dropping a pallet all tokens are lost. Windows are now blocked after vaulting 4 times. 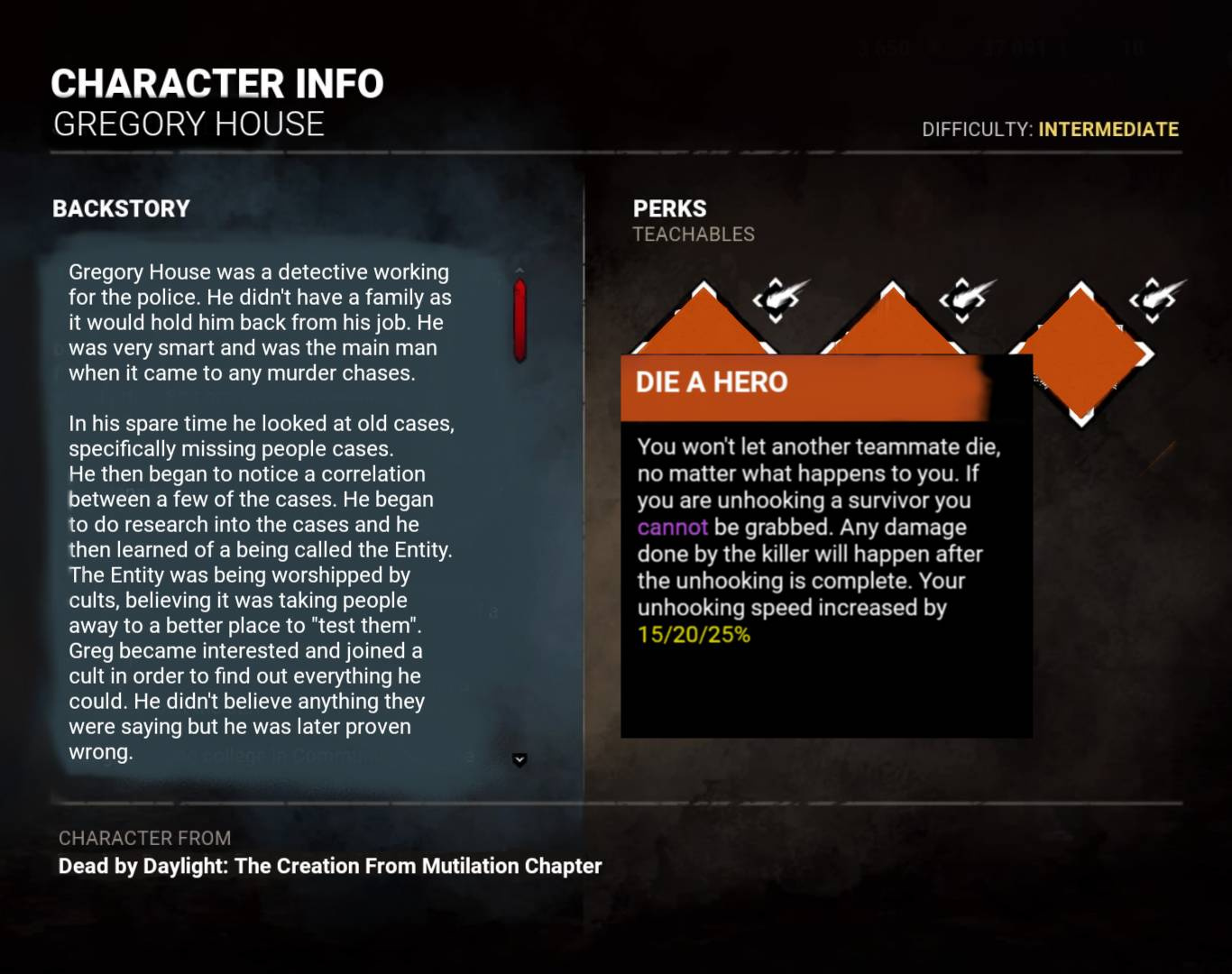 Die A Hero: You won't let another teammate die, no matter what happens to you. If you are unhooking a survivor you cannot be grabbed. Any damage done by the killer will happen after the unhooking is complete. Your unhooking speed increased by 15/20/25%

No sound from puppets during activation.

Terror radius decreased by 8m. Every uncontrolled puppet has an 8m terror radius.

Cannot swap to a new puppet. Uncontrolled puppets will spawn next to generators and will give 10% decrease to repair speed. One extra puppet will spawn on the map.

Puppets will have 1 second decreased activation time. The puppet swap cooldown is decreased by 5 seconds.

Replaces the Pulse ability with the Block ability. The killer can send out a pulse from one of his uncontrolled puppets on the map. All vaults and generators within a 16m range will all be blocked for 8 seconds. It has 60 second cooldown. Puppets will give off an audio que when the killer uses this ability.

Puppets can be placed 10m closer to each other.

The puppet has a reduced movement speed of 4.4m/s. The puppet's speed is increased to 4.8m/s when within 16m of an uncontrolled puppet.

Hitting a survivor within 3 seconds of activation will cause the survivor to have the broken status for 60 seconds.

When swapping all of the puppets activate but instantly drop after activation except for the new host puppet.

Survivors can see the auras of uncontrolled puppets within 16m. The puppet will gain an extra 100% bloodpoints in the deviousness category for surprise attacks.

If a survivor is hit within 5 seconds of activation then the puppet will lose its terror radius and red stain for 8 seconds.

Survivors are given the blindness status effect when within 16m of an uncontrolled puppet.

Puppets get speed boost for 1 second after activation.

Healing speed for survivors is decreased by 25% when within 16m of an uncontrolled puppet.

The puppet swap cooldown is decreased by 5 seconds.

Puppets get a speed boost for 0.5 seconds after activation.

The puppet lifts the survivor up while in a standing position. He then stabs them in the chest with his spear, and begins to pull up, exposing the survivors rib cage. He then reaches in and pulls out their heart, drops it on the ground and crushes it. He then pulls out his spear and they just drop to the ground, dead.

Thanks for reading, any feedback is welcome.