Home › Feedback › Feedback and Suggestions
The 3.6.0 PTB is now live on Steam! For full details, click here: https://forum.deadbydaylight.com/en/discussion/130916/
We are aware and looking into the issue which caused players to have their rank reset further than intended. If your rank was not reset at all this month, this is a visual bug and closing and re-opening the game should fix it.
We have updated our Forum Rules. Please take a moment to read through them: https://forum.deadbydaylight.com/en/discussion/87004/ 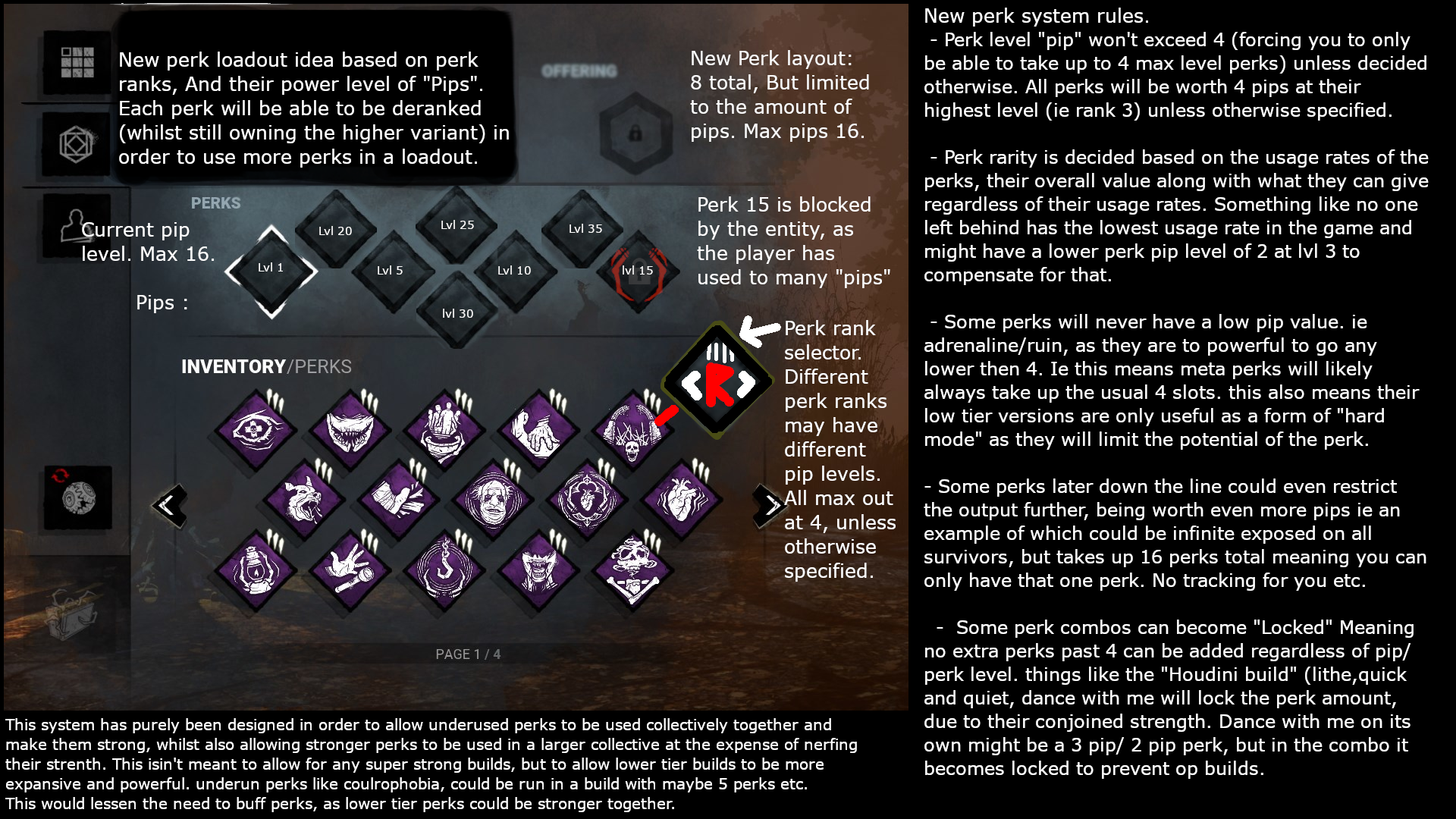 My idea for a system that uses lower level perks, and underused perks and allows them to fit into more builds by lowering their cost of applicability into a loadout.

To sum it up

The purpose of this idea is NOT to allow for more then 4 level 3 perks at once (excluding very certain perks like monstrous shrine, or no one left behind,) but to allow for more lower level variants of perks to be played in larger builds, and underpowered perks to see more play. This is designed so that for the most part you will be sticking to having 4 perks, whilst also allowing the freedom to run less then stellar perks in "variety builds" per say. There shouldn't be cases of players running 8 perks unless all their perks are at level 1, and are for the most part underwhelming. The case might become that a killer might run mad grit, agitation, iron grasp, all at level 2 monstorus shrine at level 3 and maybe hangmans trick level 1. or a survivor might run, saboteur level 1, along with breakdown level 3, flip flop, level 2, unbreakable level 1 and no mither lvl 1. or something crazy like that.

Dbd for the most part is around optomising and specializing your build, but for the players who want to be a jack of all trades, run everything at once, they should be able to at a cost (lower level perks.) This also opens up more opportunity for ultra rare offerings, that expand the useable pips for a trial (allowing perhaps an extra perk.) 99% of the time, running 4 perks level 3 will be your best bet. but sometimes you might want to level one or two down, and run that extra perk your missing or just don't have ranked up yet.

Also if this could be used unrestricted (With the option to limit it in the menus) for kill your friends that would lead to some really fun games.