Recently I've become more active on the forums, and started getting back into DBD once more. I notice that lots of people were saying to "Nerf Spirit" but I'm completely against that idea.

Instead of nerfing another killer, only to have a few true viable ones and seeing them almost every game, let us discuss the others killers we hardly ever see!

There's lots of other killers that should have that same recognition that deserve the viability that other high tier killers have! As a survivor main, I enjoy having a challenge put against me by all killers. It sucks that after awhile you see a repeat of similar killers in more higher ranks.

Before anybody attacks me, I play both sides but prefer survivor! So please don't bash on me so hard! <3

Anyways, here is what I usually see in my games. I will be giving a short description of each killer, their viability, perks, add ons, average kills I see in MY games, what ranks they're in, and how rare they are. Of course you don't have to agree with me, but this is just the way that I see it. 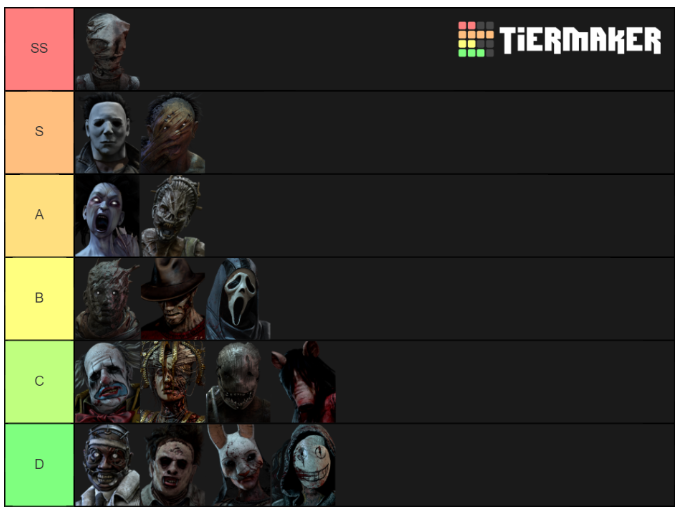 Nurse's power is broken if you play her really well. Her add ons are really good. Her perks are great. Average can be 2k but if played well a 4k will happen. Can apply some map pressure. Very rare to find.

Myers's power is astounding. Very powerful with the right add ons, and perks are decent. You will get a 3-4k for sure. You can find him at any rank, but mainly high or mid rank. He can apply some map pressure. Common to find.

Billy is mobile killer, best to reaching exit gates or generators quickly. His add ons are great, but most of his perks aren't that good. He can get a 3-4k if you play him well. Can apply an insane amount of map pressure. You can find him at any rank. Uncommon to find.

Spirit is another very mobile killer, great for mind games. She's one of the few balanced, truly viable killers. Good perks, and very great add ons. If you play her well you can get a 3-4k. Can apply immense amount of map pressure. She is seen at any rank. Common to find.

Hag is another viable killer when you catch a survivor at the right time. Her power is great, she has decent perks, ruin being her best one. Her add ons are great. You can get a 2-3k, but if you play really well a 4k for her. Can apply some map pressure. You can find her more at low-mid ranks. Common to find.

Wraith is fun to play, but not as viable as the others I mentioned above. None of his perks are usually ever used, or when they are, they are completely rare. His add ons are good. On average, I see Wraiths get 2k or below unless they're really good. Can apply some map pressure. Almost always found in low ranks. Common to find.

Freddy can be viable as well. His perks are decent. His add ons are decent. On average, I'd say they get about 2-3k kills. It's rare to get a 4k as Freddy from what I've seen. As survivor, I was able to ignore his power and still do generations easily, which can be a problem nonetheless for Freddy players. Can apply some map pressure. Found in any rank. Rare to find.

GhostFace can be viable, but he's a stealthy type killer. Usually stealthy type killers (Expect for Myers) don't really have good games, I've noticed that a lot. His perks are great. His add ons are good. The average kills I see GhostFaces get are 1-2k. (Yeah, it's really bad!) His power can be avoided however, which makes him more B tier. He doesn't apply any map pressure. Found in low or mid ranks. Rare to find.

The Clown can be somewhat viable. His perks are good. His add ons are decent. I usually see Clown's get either 2k or 3k. They usually get genrushed to hell in my experience. He can apply to little or none when it comes to map pressure. Found in mid ranks. Rare to find.

Plague is also averagely viable. Her perks are okay. Her add ons are decent. Average is usually a 2k. Depending on the team, a 3-4k can happen. Her power can be very easily ignored, making her more a C-tier type killer. Can also get genrushed badly. Vomit Registration can sometimes not go through. Can apply little to some map pressure. Found in mid ranks. Rare to find.

Trapper is another fun killer to play, but easily counter-able as well making him more of a C tier killer. His perks aren't that great. His add ons are good. On average Trappers can get 1k to 2k. (In higher ranks), however in lower ranks he can get more of a 3-4k. Doesn't apply that much map pressure. Found in lower ranks. Common to find.

The Pig is another stealth killer, her traps can be ignored by high ranked players and still continue doing generators. Her perks are okay. Her add ons are okay. On average I'd say they get about 1-2k. Doesn't apply that much map pressure. Found in mid to low ranks. Uncommon to find.

The Doctor is one of those killers that are supposed to make generators hard to do, but does the complete opposite. Sometimes his power doesn't work or do enough. His perks are good. Add ons are okay. On average, they get about 1-2k or less due to genrushing. Found in low ranks. Uncommon to find.

Leatherface may sound like a really good killer, but not really. His stun time makes it worse for him. Has great perks. Okay add ons. On average they get about 1-2k or possible 3k. It's rare to see LF get a 4k in my games since they always get genrushed as well. Found in low and mid ranks. Uncommon to find.

Huntress has a great potential as killer but hit boxes, and delays on console make it so much worse. (I'm so happy devs are going to fix this!) Her perks aren't the best, I never see anyone running them that much. Her add ons are good. On average I'd say they get about 1-2k. She's really easy to loop as well, and usually genrushed. Found in low ranks. Uncommon to find.

Legion was a killer that you either hated or loved. After his rework, I barely saw a Legion. His perks are good. His add ons are okay. On average, Legions get 1-2k. Found in low ranks usually. Very rare to find nowadays.

This is my tier list of killers I've played against, and my personal opinion on them. I've also had my own personal experience with them. The killers I play a lot are: Myers, Trapper, Spirit, Plague, Huntress and The Pig.

I also play on PS4 so some of these results might a lot more different than Xbox or PC. Or maybe just for people overall. By average, I mean different players not people who main these killers by the way!!!

Edit: Fixing some errors, and added some text.