Home› Share Your Work› Creations
With regards to Error 112, we apologise that this error is still affecting our players and can assure you it is receiving our attention. Please bear with us and we will update with more information when we can.

LORE: Back on an old farm in Indiana an Amish farmer named Abraham Frun decided that he wanted to do something bigger. defying his elders and his religion, he ran from home and began to study programming with the idea being to help the worlds problems not through faith but through technology. He was devoted to his craft, and with his first few models being successful, he felt it was time to prototype his first ever.. major.. creation. Frun knew that by continuing he would be defying his homes teachings, he knew he'd never be let back into his home as well as put him into serious debt. he decided that he wanted to create life, for years he toiled away in his workshop as he tried everything to build the perfect machine, something strong and capable of doing what ten farming machines couldn't do at once! Frun was building, a robot. after over a decade of working, he felt like he was ready to finally test the machine. after putting the machine in front of a patch of wheat and hay outside the workshop, he put in a simple command, a command he felt could go wrong.. a command hell regret, called "harvest". before the robot could do anything however.. something went wrong.. no the robot didn't become sentient.. it just booted up for only a few seconds before it just couldn't work. a rancid smell came from the robot which completely put years of work down the drain, frun brought the robot back inside and began to look for a new power source, but everyone just thought he was ridiculous! everyone he asked just shamed him for what he thought was something good.. finally, there was a man who seemed to have been interested, overjoyed with the idea of finally showing someone his creation, Frun brought the man to the workshop to show him what his prized creation, but when he looked back he saw that the man had brought some friends with him. They were debt collectors, and they wanted to make sure they got paid. The men began to laugh as they looked at the pitiful hunk of metal, Frun tried his best to explain but they were not taking him seriously. The men were furious to see their money being used on a simple project and ridiculed Frun and his work, all his years of work being talked to by a bunch of goons. eventually frun had enough, and decided to show the goons what the robot could do, he looked at the robot and plugged the battery in and said "harvest", and the room was quiet. the men watched as the robot started to get up, frun was hoping the battery would work this time, and that hed finally have a power source.. if only he knew what that program of harvest really meant. after a few days the workshop was checked only for there to be 5 mangled bodies with the body of Abe Frun missing, along with the robot. each body was eviserated by what seemed to be a harvester drill, with most of their blood drained from their body. nobody knows what happened to frun or the robot, but rumor has it that they both now have a new power source. 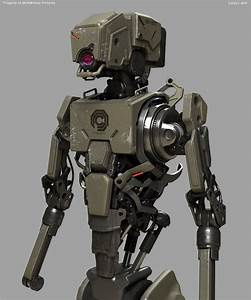 terror radius- 28 meters :you can hear the metal clanking when he moves at 38 meters.

weapon: harvester drill (like a dirt drill with the blades being more cone shaped to carry up "grain")

The robot starts out with a smaller terror radius, shorter movement speed, and a slower lunge time, however, the robot has the ability to steal power from generators. as we all know, generators are fixed in stages, the robot has the ability to head to a generator that has been fixed and as long as it is not fully fixed, the robot can actually perform its own skill checks to steal power, the amount of power stolen depends on how well and how long you steal from a generator. after the robot has harvested enough power it will level up one level (similar to Micheal) when leveling up the robot will let out a loud noise that sounds like a haunting train noise. the robot has 3 levels and starts out at level 0, at level one which is about half a generator, the robots movement speed increases to 110 and its terror radius grows to 30, on level 2 the movement speed is at 120% and the terror radius is 32, the robot also gets the ability to track which means as long as it is not interrupted, to robot can stop and stare at a survivor for 3 seconds before being able to track that survivor for 15 seconds, finally at level 3 the robots movement speed increases up to 145% and they have a 38m terror radius, this stage only lasts 10 minutes before having to be recharged, however it allows the robot to not only track targets, but whenever they come into contact with a pallet they will simply bust through, busting through pallets will drain the level 3 charge by 3 minutes per pallet. lastly, hooking survivors also gives a small amount of charge. despite being made of metal, the robot is not immune to decisive strikes or flashlights even in level 3.

Malware coding- upon each upgrade you no-longer make a loud noise.

Fixed gearbox, dual motor gearbox, tread gear box- smoother engines and gears allow for quieter and more effective use of energy- you gain 5-10-and 15 percent more energy from each check

Do no harm:null- a second order thats been treated as a virus, now instead of an increase in movement speed and the ability to go through pallets, level 3 makes it so that any survivor you hit will immediately go to the dying state.

iridescent cord- theirs something different going through your wires, its like blood flowing through veins.. now each skill check is either a failure or a great success, no in between.

CtrlAltDlt- when a generator has a perfect skill check, you see its aura as if it was failed

hex:Virus-upon hooking a survivor, gain a point up to four- when a point is used, all survivors in your terror radius will recieve a random effect that isn't bleeding or dying.

firewall- when chasing a survivor, if the jump through a window they will recieve the blindness effect

This is my first ever post and idea- i hope you all like it, there's a lot of talk about generators being fixed to fast so i thought id add a killer that takes advantage of that. please comment your feedback and thanks for reading.