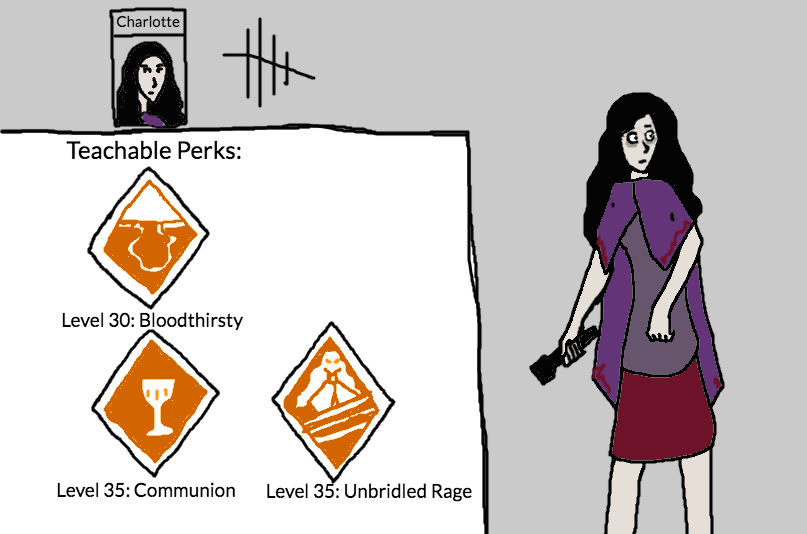 I'm curious to know what people think of this concept. You can see this on my art page as well (on dA, I'm Noctis-Corvus).

Not all survivors are human, but as long as they are willing to help others escape the trials, they might as well be. One such example of this is a little girl named Charlotte. A child with a troubled history, she had no family and desperately wanted a way out from the slog that became her life. Foster parent after foster parent couldn't handle this depressed little girl. The entity took note as she was in such pain, not just due to an isolation from others, but due to her own masochistic tendencies. After being abducted, she was transformed into a killer, known as the Vampire... but she couldn't bring herself to kill survivors because they tried to help and protect each other. She gave pain, but felt sorry for inflicting it against them after seeing the desperation in their eyes...

After refusing to do her job, the Entity decided to strip her of most of her power and make her a survivor. It eagerly awaits for her last hopes to be blotted out and her to join the roster of killers again... and it knows it will happen.

But that is unlikely to happen in the present moment, as now supported by her fellow survivors, she feels that they are her family and will do all she can to protect them... despite her new nature.

(Lvl. 30) Bloodthirsty: Not all of your enhanced senses have been stripped away from your transition from a killer to a survivor. Pools of blood are more vibrant, and when standing near them (10m or less) you can see the aura of the injured survivor within 32 meters. She gains a small TR (20m/15m/10m) and red stain when tracking another survivor. The killer cannot hear the TR or see the stain.

(Lvl. 35) Communion: When injured, you can approach a dead body or an alive survivor and, through a short animation (which will last between 2-5 seconds, but a dead body will be longer than an alive survivor), drain them of blood. This will heal her 1 health state, and injure a living survivor performed on. The alive survivor will be broken for 20/15/10 seconds. You will not take blood from an injured survivor.

There will be a cooldown of 60 seconds.

(Lvl. 40) Unbridled Rage: When injured by another, you become furious as you wait for an opportunity to strike back. When injured, stunning the killer with a pallet will give you a 10/15/20 second window to attack the killer and gain a health state back. The killer will be stunned for the duration of the animation performed (again, 2-5 second long animation). This will leave you exhausted for 60 seconds. If you do not use it within the 20 seconds you will not be exhausted.

EDIT 2: Gave Communion a cooldown, and Unbridled Rage is now an Exhaustion perk.